Astrophotography for Beginners – Everything You Need to Know to Get Started

Have you ever looked at a professional photograph of a dreamy starscape and thought, “that’s incredible… but there’s no way I could ever do that”? In reality, capturing the beauty of the night sky isn’t nearly as difficult as you might think.

Many people assume that taking photos of the stars requires lots of fancy equipment and specialist skills.

In this introduction guide to astrophotography for beginners, I explain how you can get started using basic photography equipment and a few simple principles.

By following these astrophotography tips, you will be able to take some beautiful starscape pictures of your own. And, who knows? You might also discover a new hobby that turns into a lifetime passion.

While the precise astrophotography settings will vary from location to location according to the conditions, the following basic setup is a good starting point: Use the lowest aperture setting available on your camera e.g. f/2.8 or f/1.4

Use manual focus. If your camera has an infinity focus then use that; if it doesn’t, find something bright near you to focus on, or do some internet research to find the best infinity setting for your specific camera and lens. 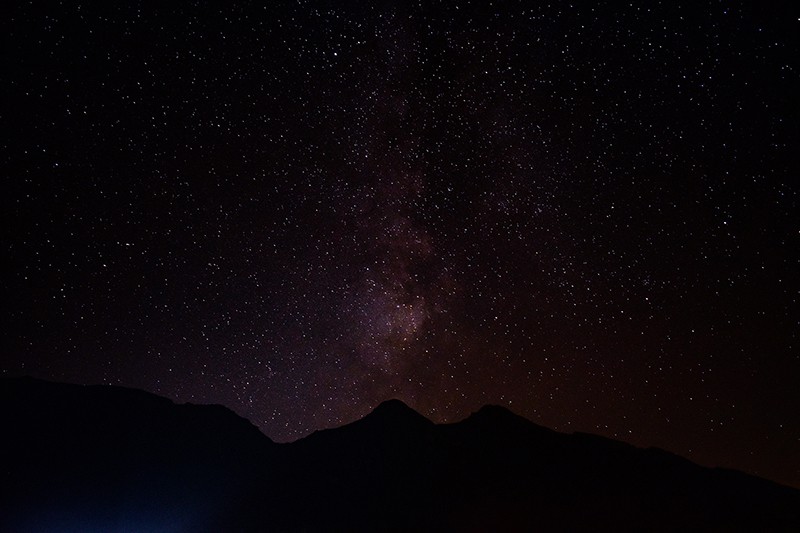 Learning how to do astrophotography can be a rocky road if you come into it unsighted. It has certainly been a steep learning curve for me, and I made many mistakes when starting out.

These astrophotography tips will help you to bypass some of the common beginner mistakes and fast-track your pathway to taking amazing night sky images:

The first thing you do should be to check the moon cycle. Moon Giant is a great resource for this. New moon is the best time for astrophotography, as there is minimal light pollution. Avoid the week of full moon.

2. Familiarize with your location

Find your bearings before it gets dark. Take a walk to the spot where you think you’ll take photos, and scout the area.

Take a hand torch with you. Not only will it will help find your way, but you will also need it to focus the lens on something bright.

Try and use the landscape to frame good photos. Things like mountains or protruding buildings can give great context to the shot.

It will take longer than you think to set everything up and get it right. It often takes me an hour or longer to get a good shot.

The amazing star photos that you see online take a huge amount of post-editing. Don’t be too harsh on yourself with your initial results. If you’re able to get a crisp and clear image of the stars, that’s a fantastic start.

You will probably get some light pollution in your images because we’re using a higher ISO than the professionals. That’s okay. The reason for this is that professional astrophotographers layer or ‘stack’ multiple images to get rid of noise and light pollution. We’re not at that stage yet, so we’re just focusing on getting some good-looking photos.

Finally, it gets cold out there – make sure you wrap up warm! You don’t need to spend a fortune on gear to begin taking star photos. While an advanced astrophotographer will have telescopes, mounts, light pollution filters and specialist editing software, you can get started with just a camera and tripod.

The most essential feature to look for in an astrophotography camera is the ability to change the shutter speed. A good starting place is to invest in a DSLR camera if you don’t have one already.

I use a Nikon D5600 with the standard 18–55mm lens, which is one of the best DSLR cameras for beginner astrophotography. In the past I’ve also used the Nikon D3300 and its successor, the D3400 – these are more affordable options that cover all the basics.

There are even mobile phone cameras available today that enable you to control the shutter speed. I have the Huawei P20, which offers this feature. The next level up from this is the P20 Pro, which is capable of taking surprisingly high-quality photos of the milky way.

The long shutter speeds needed to take pictures of the stars also require you to use a tripod. Without one, your images will just come out a messy blur. You’ll probably be travelling when you want to take photos of the stars, so it’s important that your tripod isn’t too big or heavy.

I use the Manfrotto compact light aluminium tripod with a ball head. It’s small and lightweight enough to fit it in hand luggage, and the ball head allows you to position your camera in the best way possible for your shots of the stars. It holds a standard DSLR camera well, and it can be adapted to use with a smartphone.

I must point out that a remote control is not a compulsory astrophotography tool for beginners. But at the very least, you must be able to set a timer on your camera.

Without the use of either a timer or remote control, you’ll get the same problem as if you weren’t using a tripod: camera shake. When you’re using really long shutter speeds, pressing the button can cause the camera to move and blur. Using a timer eliminates this problem, using a remote makes it even easier.

I use the PIXEL TW-283/DC2 Wireless Shutter Remote, which works with my Nikon camera. It’s fairly easy to use, but it’s not just a case of point and click, so make sure you read the instructions thoroughly when you get it.

Before I bought my remote, I simply used the standard ten-second timer on my camera. A remote is much quicker, of course, because you don’t have to wait every time you want to take a photo. Those precious seconds can mean a lot when you’re outside in the cold and dark.

The best places for stargazing and astrophotography are those with low human inhabitation and limited light pollution. Mountain ranges and deserts naturally offer the clearest night skies.

International Dark Sky Sanctuaries are perhaps the ultimate astrophotography locations, and there are four of these around the world. Chile’s Elqui Valley was the first to be designated as one in 2015, and it will be one of the best places to see the July 2019 total solar eclipse.

The three other sanctuaries are the Rainbow Bridge National Monument in Utah, the Gila National Forest in New Mexico, and Great Barrier Island in New Zealand.

Look out for places that regulate light pollution, such as Dark Sky Reserves. There are several of these worldwide, including in the United Kingdom, Ireland, France, Germany, Canada, Namibia and New Zealand. 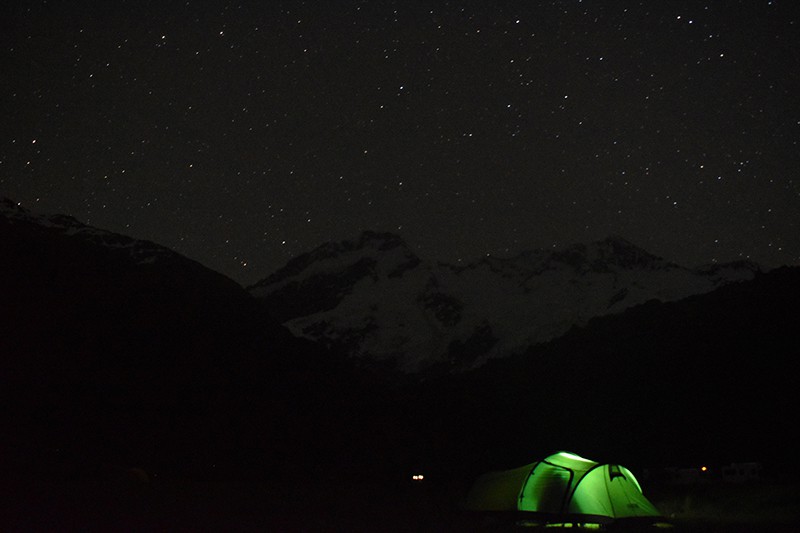 We visited the Aoraki Mackenzie Dark Sky Reserve in New Zealand. The small town of Tekapo in the region has strict rules on lighting in order to protect the night sky. We saw some spectacular starscapes at the foot of Mount Cook nearby.

Many of the most impressive stargazing locations I have encountered have been when hiking in mountainous areas. Examples include the Bolivian Andes, the High Tatras in Slovakia, the Tongariro Crossing in New Zealand and the national parks of Patagonia. 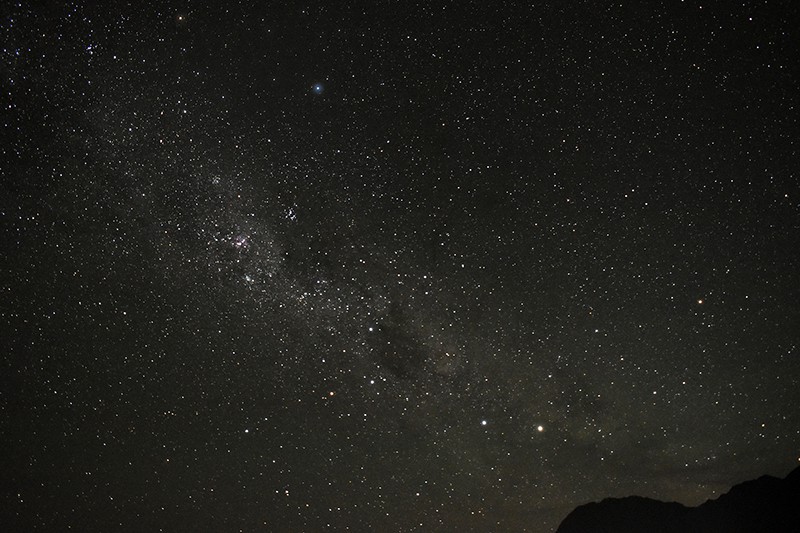 You don’t need to travel to somewhere exotic to get started, though. Try finding a spot near you that’s a reasonable distance from any towns or cities. A rural campsite would be perfect. We first shot the stars in the South Downs, UK, which is just an hour’s drive from London, and it was fabulous.

Take a tent, a flask of hot drink, some snacks and warm clothes, and see what you can capture. You might just surprise yourself.

Lisa Pool has worked in creative roles for over ten years, with a degree in illustration and a masters in communications. In recent years, she has developed new passions for world travel and astrophotography; she has visited 35 countries including dark night sky locations in Bolivia, Chile, New Zealand, Australia, Slovakia and the United Kingdom. In the Elqui Valley in Chile, she took part in an educational tour with a local astronomy expert. Lisa is the co-founder of the blog Career Gappers, which aims to inspire and equip people to take travel career breaks.