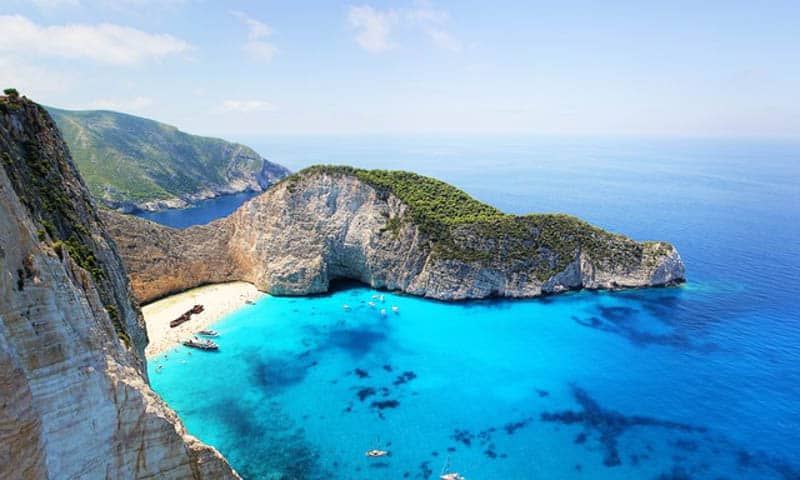 Home » Why You’ll Want to Hit these Best Beaches in Zakynthos, Greece Now

Greece is filled with gorgeous islands, and Zakynthos is arguably at the very top of the list. Filled with incredible food, stunning beaches and welcoming locals, Zakynthos is the perfect place for an island getaway. 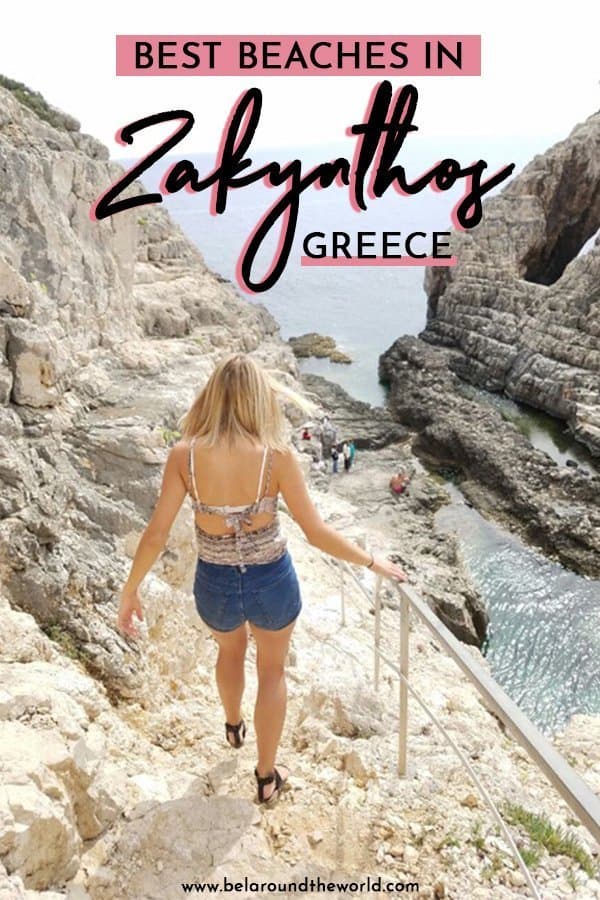 One of the top reasons to visit Greece, and Zakynthos in particular, is the pristine beaches and year-long sunshine.

If you want to avoid crowds of tourists, you might consider visiting Zakynthos in the spring or fall. We went in October, which was after the crowds had left, and we still had warm, sunny days.

The peak tourist season is from June to September, which is when the island has the warmest, driest days.

If you are willing to deal with only moderately warm days, fares are much cheaper and the crowds are much thinner from April to June, and again from October to November.

For an overview of Zakynthos’ weather by month, click here.

If you want to truly see the island, renting a car is an absolute must. Car rentals are quite easy to come by on Zakynthos, and we were able to order one upon arrival without any issue. The rental was much cheaper than we expected, but the car was also older and certainly not a luxury vehicle.

While you may think you would prefer a larger, all-terrain vehicles like Jeep Wranglers, which are so popular in other island destinations, you may want to think again. 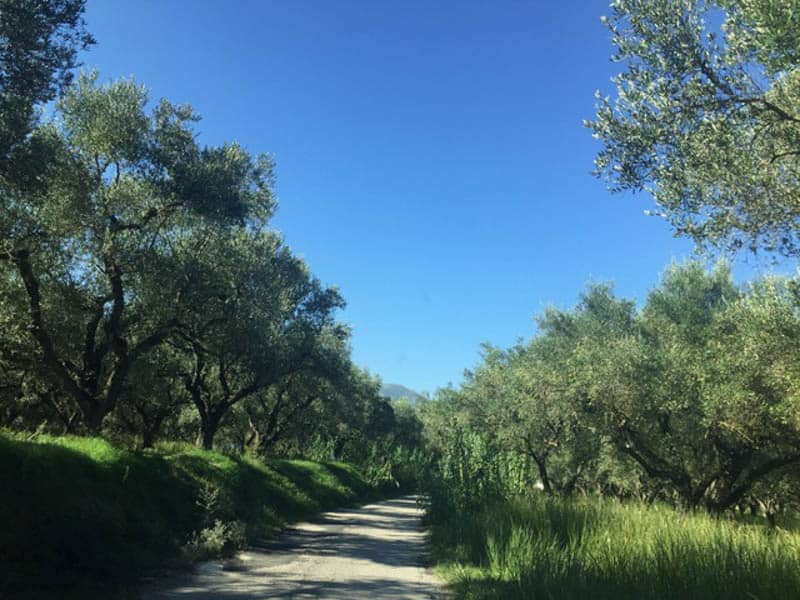 Road in the middle of Zakynthos 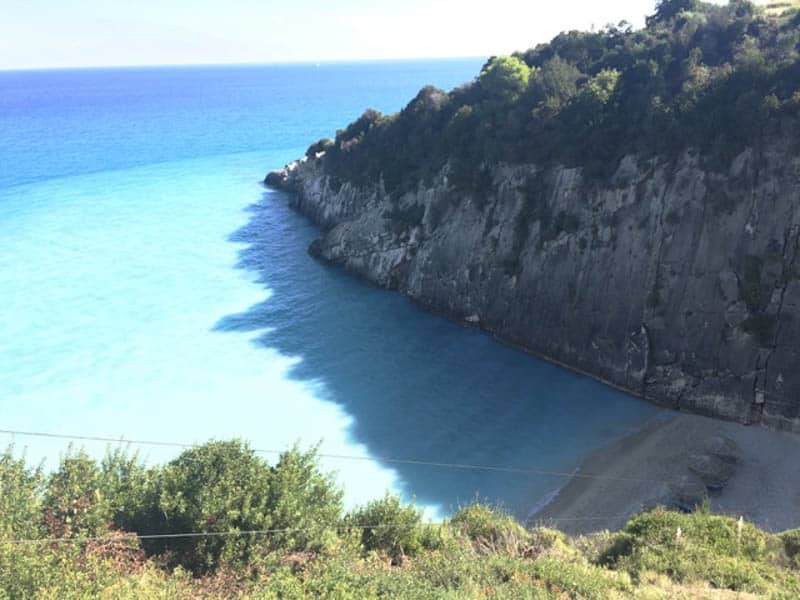 If you are going to one of the Greek islands, it’s probably safe to assume that you are at least moderately interested in going to the beach. Thankfully, Zakynthos has a number of incredible beaches (truly, you can’t go wrong here), and one in particular has become famous due to social media. 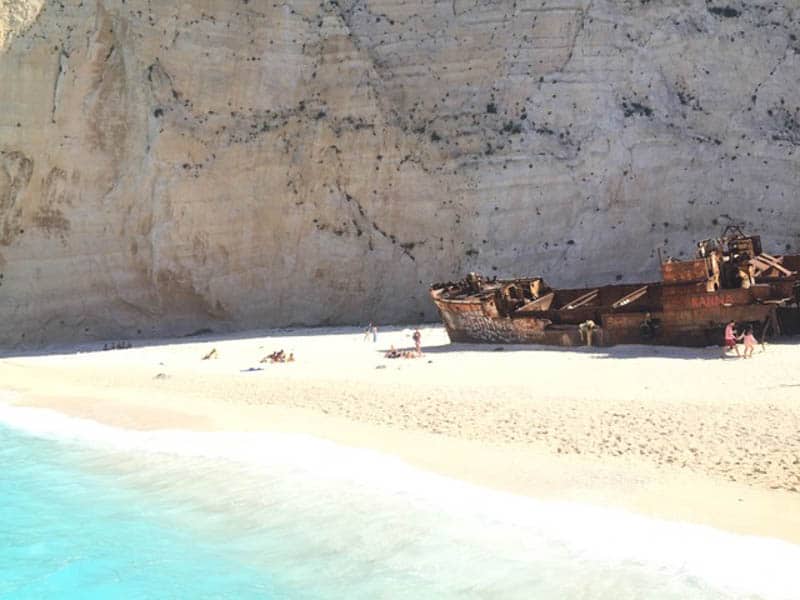 Perhaps the most famous beach in Zakynthos, Shipwreck Beach is only accessible by boat, making it even more intriguing. Shipwreck Beach is also known as Navagio Beach, which is really an exposed cove that is home to – you guessed it – a wrecked ship. The ship ran aground on Navagio Beach in 1980, and has since then become a major tourist attraction.

Shipwreck Cove from above

Many of the photos of Shipwreck Beach are taken from above the beach, which can be reached by car. 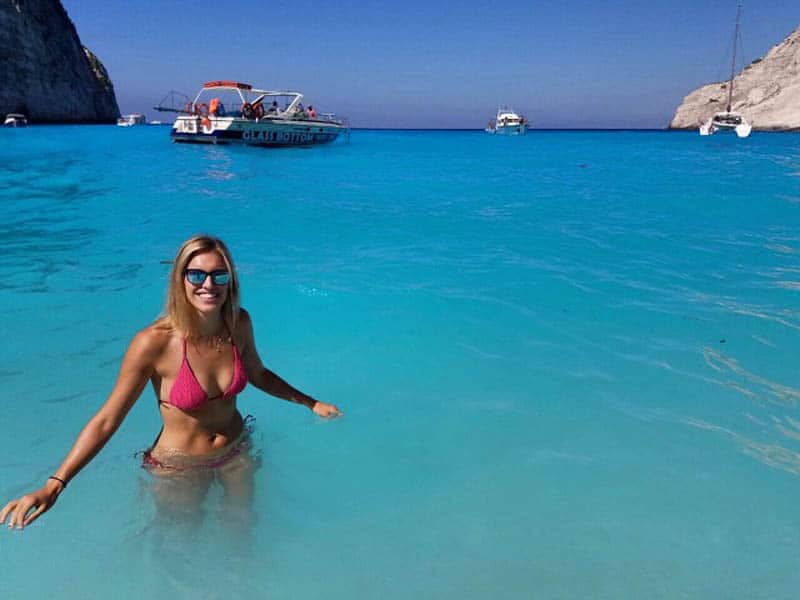 However, If you want to reach the beach itself, you need to take a boat. There are several tour companies that offer boat rides for very reasonable rates, which is what we did when visiting. The boat experience itself is really fun, and most also take you by the Blue Caves, which are equally stunning. 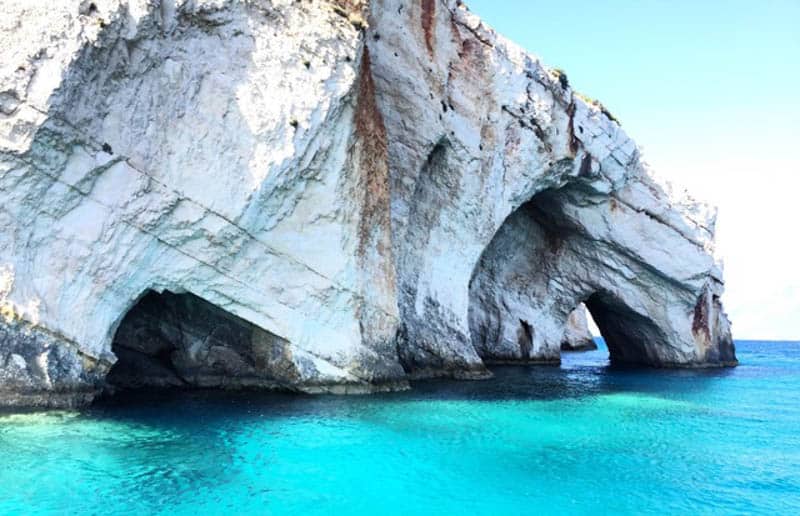 The Blue Caves are located between Agios Nikolaos and Skinari Cape, and they offer incredible, crystal clear waters for swimmers and boaters. 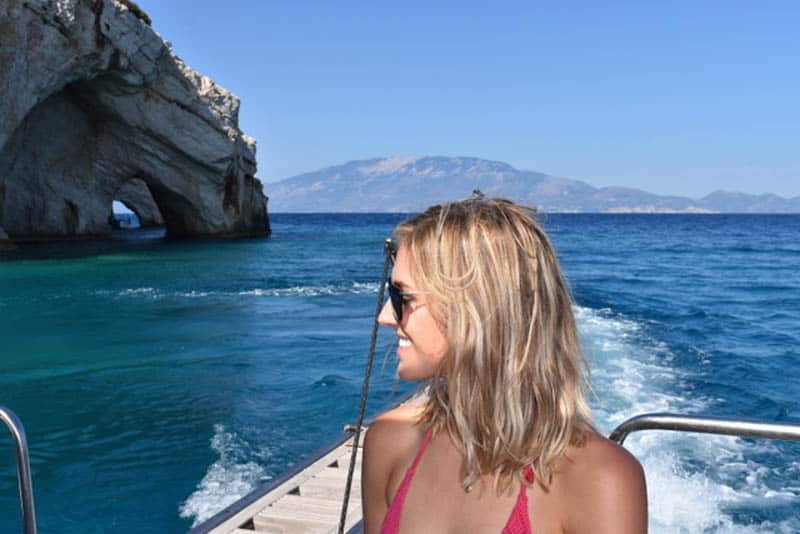 The boat tour we took allowed us to stop for quite a while to swim in the caves, where we were able to explore the cave formations and swim into the caves themselves. I would keep going on about how amazing the water is, but it’s probably better that you just look at the pictures and see for yourself. Safe to say though, if you visit Zakynthos, you absolutely should see the Blue Caves.

Where to Stay in Zakynthos, Greece

The entire island of Zakynthos is beautiful and worth seeing, but most people choose to stay in one of the hotels that is within a 30-minute driving distance of the airport. Pettas Apartments is one of the highly rated ones near the airport.

The island’s capital city is also called Zakynthos, and it is a hub where you can find a lot of organized tours, which are a good option if you do not drive or choose not to rent a car.

We stayed in one of the beach hotels near the city of Zakynthos, and found that it was very convenient to drive around the island. If you drive up to the area where Shipwreck Beach is located, there are countless less-crowded beaches and look-outs along the way, which are certainly worth stopping at.

Staying near the city of Zakynthos also made it convenient to drive to other parts of the island, such as the south, where there are more bars and nightlife, or to the western side of the island where everything feels a bit more rural and less touristy.

Some of the most popular, top-rated hotels are:

Prefer something more homely? Some of the most popular, top-rated apartments are: 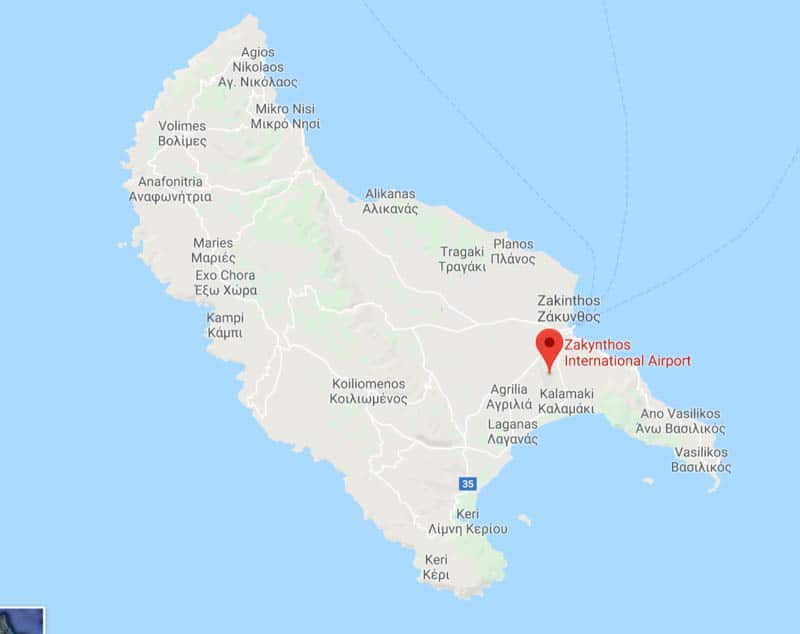 When looking at Zakynthos, it is pretty obvious from the road structure that most of the traffic occurs near the coast.

On the eastern side of the island, you’ll likely find more people than you will on the western side, since the east is home to the city of Zakynthos and major tourist attractions like Shipwreck Beach and the Blue Caves.

If you are looking for a more authentic feel of the island, I highly recommend driving through the middle of the island and visiting the western side, which is home to incredible views and beaches.

There is really only one main road that goes through the middle of the island, and it takes you through areas with lots of trees and stand-alone houses, with the road literally winding feet from the houses’ entry gates. On the drive, we saw everything from olive tree groves to roosters wandering in the middle of the street, which made for a really nice change after being surrounded by tourists at Shipwreck Beach. 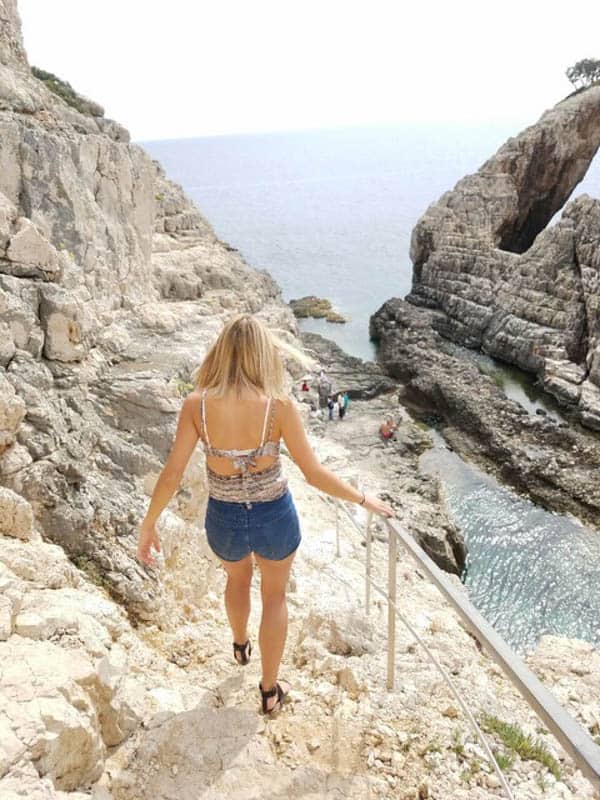 One of our favourite parts of the trip was an unexpected visit to Korakonissi, which we stumbled upon when driving around. We found an area to swim there, as well as breathtaking rock formations and a very laid-back vibe that felt much more local.

You truly cannot go wrong visiting Zakynthos – the island is gorgeous, laidback and filled with incredible people and amazing views.

I hope this guide has been helpful in planning your trip to Zakynthos! Are there any particular places you have seen, or want to see in Zakynthos? Comment and let me know! 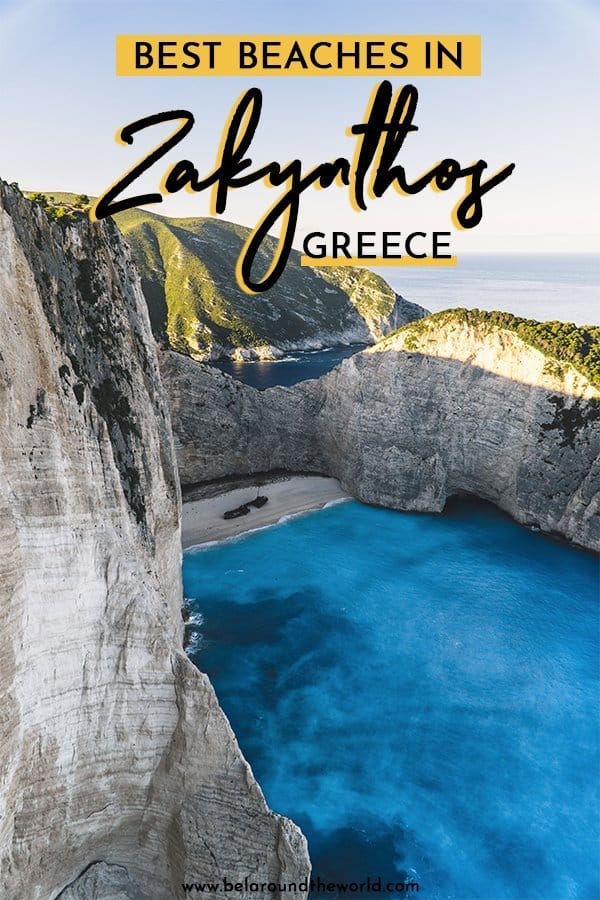 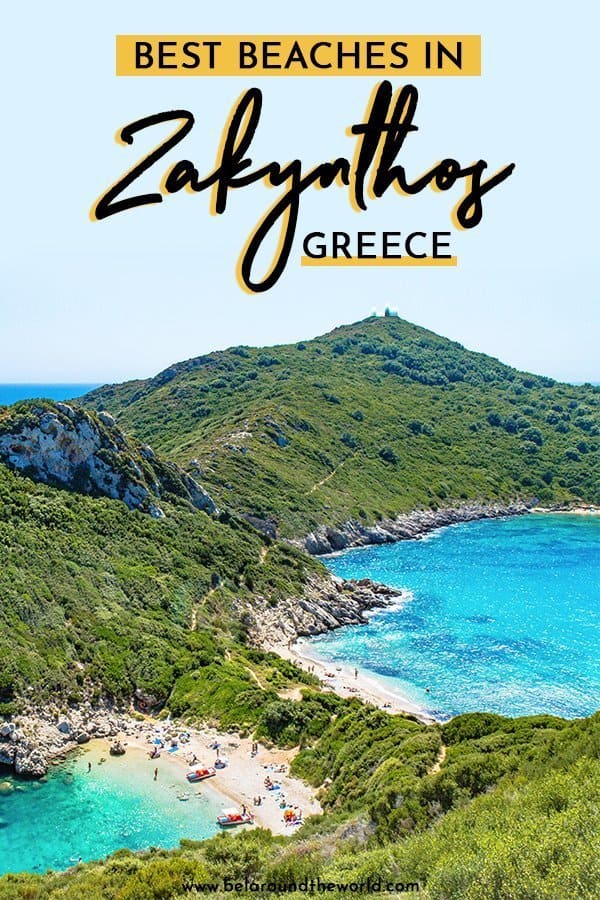 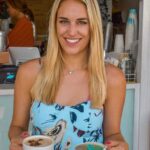 Denise is a blogger and entrepreneur who runs @thenavyblonde on Instagram and www.thenavyblonde.com. Before she began blogging, Denise was an international tv news anchor and worked for major media outlets, creating and editing viral multi-media for audiences all over the world. Having traveled to dozens of countries, she currently resides in Portland, OR and is passionate about style, travel, and helping others live their best life.

Things to Do in Santorini, Greece on Only 53€ a Day!

6 Best Places in Greece to Visit in October

Things To Do in Mykonos, Greece – Your Mykonos Greece Travel Guide