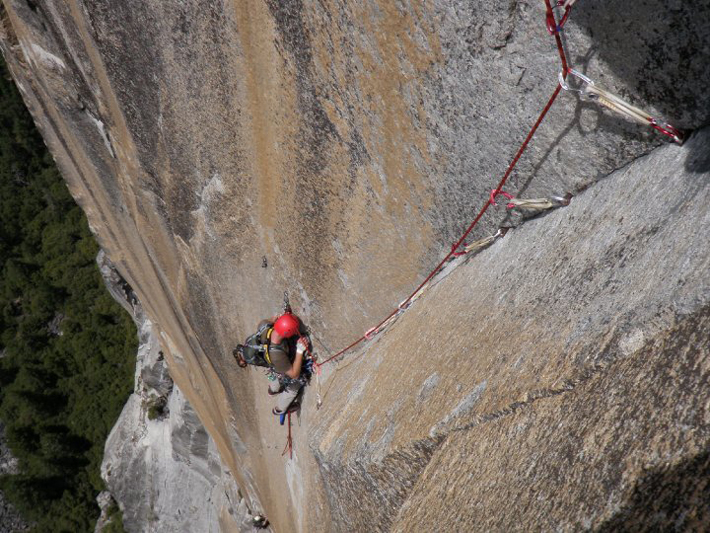 If you’re a Yosemite visitor, then these words probably don’t mean much to you. But if you’re a rock climber, you know that this is where it all began.

Yosemite, and more specifically, Camp 4 was the birthplace of American rock climbing, and for good reason.

Since the late 1950s, these campgrounds were bustling with climbing hopefuls and soon-to-be legends. Each decade, Camp 4 has seen a new set of climbing elites take to these cliffs and set new records. With each new feat achieved, the bar is raised and new climbers push the envelope with even bigger aspirations.

This day and age, names like Alex Honnold and Tommy Caldwell are the modern-day legends. Alex climbing up Half Dome with only his climbing shoes and a chalk bag. Yep…no ropes or protection. Not to mention the pair just breaking the speed record of climbing El Capitan in an astonishing 2 hours, 10 minutes, and 15 seconds.

Camp 4 is the only first-come-first-served campsite in the valley, and was the launching point for the first climbers to ascend El Capitan, Half Dome, and many other iconic cliffs.

Climbing Yosemite, between its towering granite walls and large boulders spread throughout the valley floor, leaves you with a lifetime worth of climbing to do for both the beginner and veteran.

The climbing culture tends to be very friendly, as well as international. People from all over the world spend a week or more to attempt these legendary routes. For people to fly across the globe to be in Yosemite is really a tribute to the legendary and world-class climbing it has to offer. It’s not uncommon to bump into someone and find a rock climbing partner for the afternoon, as there is a bulletin board at Camp 4 for just that.

The Spring and the Fall is often the best time to go to Yosemite National Park. The temperatures are mild and the crowds are smaller.

During the summer months and holiday weekends, the park’s roads become a parking lot and all the popular panorama trails become packed with day hikers. For a big-wall climber like myself and coming in the high season, there’s really nothing like spending the night safely suspended up on the wall in the quietness of the sunset, while watching all the cars, garbage trucks, Yosemite tractor tours and pedestrians pass by.

Some Californians I talk to don’t like going to Yosemite because of the crowds and congestion. I get it.

However it is easy to step out of the Valley floor to go on a climb or go on a less-travelled hike and find some solitude. Going climbing on Cathedral rocks or a hike to Sunrise lakes from Tuolumne are just a couple ways to do that.

It’s amazing how close solitude can be found, when it’s a quick hike away from the bustling eateries, congested roads, and paved hiking trails.

As for the climbing, there are a plethora of boulders spread around the Valley, single and multi-pitch climbs, as well as big-wall climbs that can span over a few days. With thousands of climbs, and perfect rock, there really isn’t a better place to learn how to climb and sharpen your skills. Yosemite Mountaineering School provides guided classes for all levels, if you don’t have the gear or experience.

You can try your first lead climb, do your first easy multi-pitch route, or take on a lower-grade big wall and spend the night on a cliff.

The bouldering in Yosemite has its roots in Camp 4. There are hundreds of boulders and routes conveniently walkable from your tent, and this is where the highest concentration of bouldering is.

The most famous of which is Midnight Lightning, which has an iconic lightning bolt marked on the side of the rock. There are plenty more bouldering areas throughout the Valley including many boulders around Half Dome Village (formerly Curry Village), Housekeeping campground, and Candyland (located roughly across from El Capitan).

In terms of roped climbing, my all time favourite (and most popular) climbs are here in the Valley. These include Bishops Terrace, a 2-pitch 5.8 crack climb in the Church Bowl area.

Another classic and approachable multi-pitch is the Nutcracker. It’s 5 pitches of climbing at 5.8 difficulty between Camp 4 and El Capitan.

For a longer, yet easier multi-pitch climb, check out Royal Arches, which is 15 pitches and climbs at 5.7 near the Majestic Yosemite hotel area.

After you’ve spent a day or two putting your finger strength to the test on the rock, there are plenty of rest-day activities in the Park.

My all time favourite is floating down the Merced River, which winds its way through the middle of the Valley. You can rent a raft at Half Dome Village (reserve it early), but I prefer to bring my own inner tubes.

There’s nothing like floating down a slow, lazy river with 360 panorama views of the granite cliffs of Yosemite Valley.

You could also head over to the Majestic Hotel, check out its massive fireplaces in its Great Room, and spend an afternoon on the back lawn over a picnic.

After a full day of climbing or hiking, you can typically find me on the Pizza Patio in Half Dome Village scarfing down a slice of combo pizza and sipping on a craft beer. Though the line gets long in the summer months, food always tastes better when you don’t have to do the work preparing it on a camp stove.

If you’re visiting with your family, make sure to read about Yosemite with Kids.

What to do in Yosemite National Park if I’m not a climber?

If you’re not much of a climber, but want to get a view into the climbing world, go to El Capitan meadow during dusk.

If it’s during the high-season, you can look up at the wall and see several tiny lights interspersed throughout the wall. These climbers are likely just starting their night shift as they push into a few hours after dark to make it to the next sleeping spot on a ledge.

You may think they are crazy, but to experience a world that is completely vertical for 2-4 days, getting the solitude 3,000 feet off the Valley floor, and taking the first couple steps on flat ground at the summit…those are the moments that make it all worth it.

I’ve often looked up at Half Dome, Leaning Tower and other walls when I come back to visit, and I can recall all the struggles and the adrenaline of my ascents only a few years ago.

Austin spearheads FormativeAdventures.com, a website community that empowers parents to give enriching, global adventure to the children of our future.