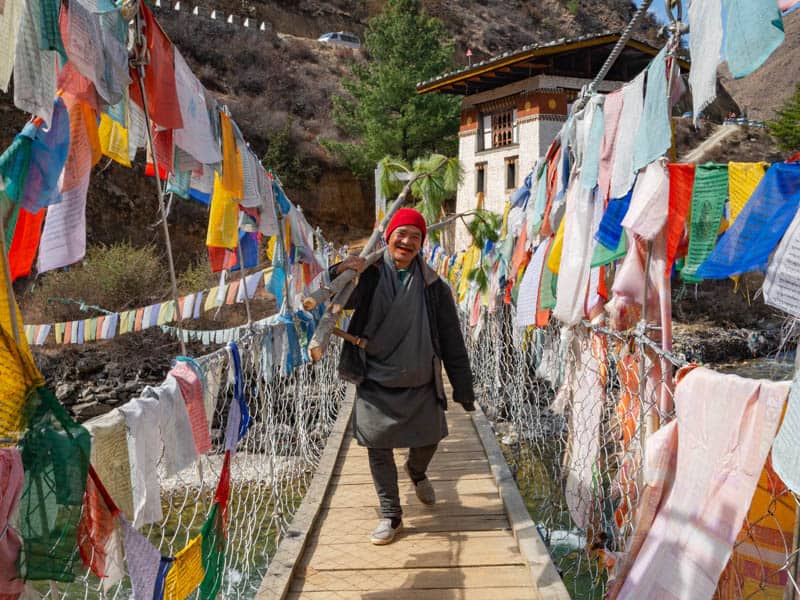 Home » What to Eat in Bhutan When You’re There

In Bhutan, food is seen as nutrition and a way to replenish from hard work. The common notion of Bhutanese food is that is it spicy, as chili is a mainstay in many of the local cuisine.

Locals enjoying their meals by the riverside

The great thing of Bhutanese food is about knowing how organic it is, as most ingredients are homegrown, except for meat (imported from India) as killing animals is illegal in Bhutan.

With our newfound knowledge about food in Bhutan from our trip in Feb 2019, we decided to share more about some of the unique dishes Bhutanese serve.

When we asked our guide on what locals have as snacks and desserts, he was perplexed.

We don’t have local desserts!

At resting stops, we are commonly served with butter cookies and sugar crackers. Here are some small bites we noticed are popular with locals.

At every corner, you can see locals chewing on betel nut, leaving their lips and teeth with a slight red stain. Sometimes you’ll see splats of red on the ground – that’s the juice being spat out. It’s usually wrapped in a betel leaf with flavourings such as cardamom, cinnamon and tobacco.

Here’s what Isabel has to say about this popular local snack:

I was apprehensive to try it initially, but I had to uncover the mystery as to why every Bhutanese would be willing to risk oral cancer and having permanently black/ red teeth for it.

So I put the betel nut to the test. When I first sunk my teeth into it, it was as hard as a rock! Still, I continued chewing to hopefully break it down. The juice that came from the betel nut + leaf combination filled my mouth with such a strong acrid taste that no matter how much I chewed, the betel nut wouldn’t ever break down. In fact, the flavour just became more pungent and unbearable. I eventually had to spit it out. (Don’t tell my guide!)

Yak cheese is a common sight in local convenience stores and markets, hanging on strings.

It is consumed by just popping it into the mouth and constantly chewing. It’s hard and difficult to bite into, so you could be chewing on hours on end (I’m not kidding). It gives a light cheesy aftertaste that’s not particularly pungent, and I found it a good substitute to chewing gum when you’re just looking for something to munch on.

The local love their rice, after all, Bhutan is covered with a vastness of rice fields, especially in Paro. It’s astounding how much rice our local guide and driver eat during every meal! Apart from having a nice aroma (similar to wheat rice), red rice is also more nutritious and definitely something that the locals eat for sustenance.

Local selling rice at the market

We loved the rice so much, we even brought some back from the market!

Buckwheat pancake is also served as a side dish as an alternative staple, similar to bread or naan. While I am personally not a big fan of it because of its slight bitterness, it’s good for dipping into the sauces of the local spicy dishes.

When our local guide first introduced this dish to us, I was amused that he was pronouncing the mandarin term for fried noodles, but we quickly realised it is indeed what it is.

The cheowmien we tasted indeed had a Chinese flair to it, with mixed vegetables, and chicken. It was reminiscent of homecooked noodles back in Singapore!

This is the national dish of Bhutan. It is a spicy stew made of chilli peppers and cheese. The locals love it and of all the meals we’ve had, this dish is almost always present. The spice is powerful and definitely packs a punch!

Instead of chili, the star of kewa datshi is the potato (kewa). Because of that, it is less spicy. It like how the cheese layers over the potato slices, but not in an overpowering way. The consistency of the cheese is more similar to a stew.

Shamu is mushroom and this is yet another variation of ema datshi. This was my favourite variation of all the datshis – the dish is light, mushrooms add another flavour, and it’s great with rice.

Shakam stands for beef and paa is sort of like a meaty stew. The beef tastes a bit like jerky and is understandably tough and chewy to bite into, but it’s a refreshing change from the usual vegetarian dishes.

Sikam is dried pork belly. The pork is stir fried with dried chili and is a hearty dish, slightly on the oily side.

Momos are dumplings popularly eaten in Tibet, Nepal, Bhutan and Himalayan states of India. They were my favourite things to eat in Bhutan! You can either get them fried or steamed, filled with minced meat, vegetable and cheese.

I recommend the beef momo, but also try the vegetarian momo for an interesting variation of mixed vegetables with cheese as a filling.

Make sure to try it with the accompanying Bhutanese chili sauce – it definitely elevates the taste of the momo with a tangy kick!

Momos are also usually served with a bowl of clear pork, beef or chicken soup. This soup is made from trying to use up waste items like animal bones or vegetable shavings.

Ara is Bhutan’s traditional rice wine that (understandably) tastes like sake, with 18% alcohol. It’s stored in a wine container called paling and a common sight in Bhutan homes.

Butter tea (suja) is definitely a local favourite! It is made of salt, tea leaf, butter and milk. It is usually served with crispy rice (zaow). While it basically tastes like melted butter, it kinda grows on you in the cold climate.

This is a local beer and our guide’s personal favourite. It’s a strong beer with 8% alcohol.

Peach wine is similar to the typical white wine, with a peachy aroma and sweeter than usual. If you’re into dessert wines, this is a good choice! It is voted as one of the best souvenirs to take back from Bhutan!

Pigging out at a local food joint – so cheap!

Most of the hotels serve International cuisines, as well as several Indian dishes. If you would like a taste of authentic Bhutanese food, do request it from your tour guide, or head to local joints in the city.

Having a meal at our homestay!

That said, one of the best meals I’ve tasted was during our homestay experience when we got to try home cooked Bhutanese dishes!

Hi, I’m Jingxin! I’m a designer by day, and letterer/ illustrator/ photographer by night. My favourite travels involve nature spots, incredible sights and amazing food. There’s nothing like the sound of sea waves washing up against the shore. I love to explore hidden gems, and you can often find me checking out a vintage store or local speakeasy.

Read other useful posts about Bhutan!

Worship this Penis and Have Babies at Chimi Lhakhang, Bhutan!

How To Prepare For Bhutan – Things To Know Before Going

Punakha Tshechu in Bhutan – Slaying Demons & Evil Through a Dance?

Special thanks to DrukAsia for this experience! All opinions remain my own.