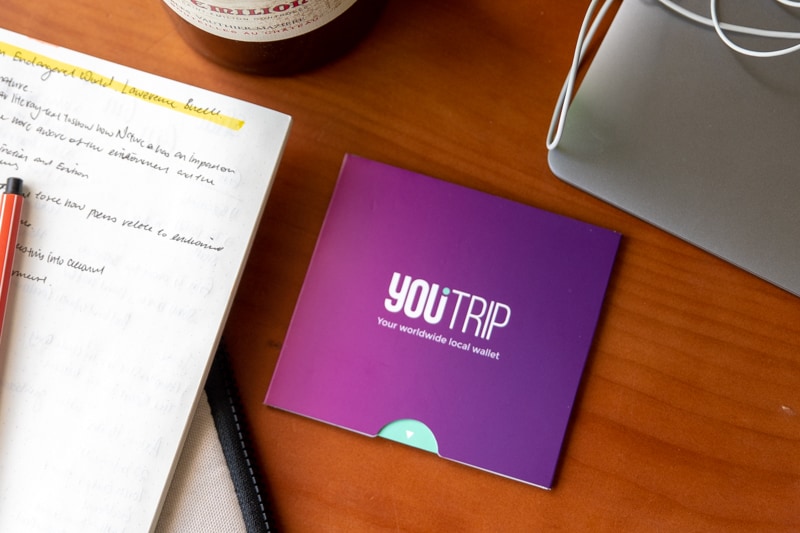 Why You Should Check Out YouTrip for Your Next Trip! (+ PROMO CODE)

Home » Why You Should Check Out YouTrip for Your Next Trip! (+ PROMO CODE)

I often go for short getaways to escape from the humdrum of city life from time to time. This usually means that I have a little stash of regional currencies at home that I use as spending money when I do travel.

However, I recently heard of YouTrip, a travel-oriented card that digitizes all these services, allowing me to virtually “carry” multiple currencies. Intrigued, I later found out that it also works as a money changer, and an Ez-Link card to boot. Sweet. But it sounded a little too good to be true!

YouTrip is relatively new, launched in 2018 as a collaboration between Ez-Link, Mastercard and You Technologies. The biggest draw would be the ability to pay in over 150 currencies, without any transaction fees or currency conversion costs. This makes it ideal for the budget-conscious traveller, so I decided to give it a shot.

1. Easily Store up to 150 Different Currencies

YouTrip acts as a digital wallet, allowing you to store 150 of the world’s most popular currencies in one place. I’m pretty sure that it covers the currencies used for the vast majority of your bucket-list destinations, so no worries when it comes to coverage.

Simply use your app to top up the currency you’ll want to use, which is pegged to Mastercard’s wholesale exchange rates While the rates here might not be the most competitive in town, they usually are only a hair off those offered by physical moneychangers, and definitely much better than that offered by banks.

Check out the current wholesale exchange rate on MasterCard’s site – just indicate your bank fee as 0%, because YouTrip doesn’t charge you anything for currency conversion or cross-border transactions!

2. No Minimum Spend, or Annual Fees

Yes, you heard that right. Unlike other offerings by banks, YouTrip can be used by virtually anyone, including students and young working adults who don’t have a fixed income.

There are also no annual fees for using the app, so you don’t have to worry about hidden costs chalking up. However, there is a flat S$5 penalty (which honestly is more like a tap on the wrist) for inactivity over a period of a 12 months or more.

Lastly, you don’t need a minimum sum stored in the app to use it, unlike banks. Just top up what you want to use, and keep the rest of the money saved up somewhere for better use than sitting around idly!

3. A Competitive Money Changer at Your Fingertips

There’s an additional feature offered for the 10 most popular currencies, including the US Dollar, British Pound, Euro, Yen and HK Dollar amongst a few others. An in-app 24/7 “Exchange Currency” feature allows you to convert between these currencies, all at the same competitive Mastercard wholesale exchange rates.

Incidentally, this means that you can lock in the currency at favourable rates if you’re tracking the fluctuations, before your trip. No need to head down to Chinatown to change your money – look forward to doing it from the convenience of your mobile device.

I really liked this feature because it easily allows me to take advantage of fluctuations between currencies, even if I don’t have the time to go down to the moneychanger due to my hectic schedule (which I’m sure you can relate to).

You get to use the card for contactless payments at the 30 million merchants worldwide that support MasterCard! That translates to not needed to fumble about for notes and coins for your everyday purchases while on the go and seeing what the world has to offer.

You can use your Mastercard-enabled YouTrip card for both in-store and online purchases, just like you would with any other Mastercard.

What if I run out of cash overseas? Well, your YouTrip card can also be used as an ATM card – simply use any ATMs that support MasterCard to draw out any amount you want from the value you have stored in the app.

Even though YouTrip charges S$5 for every ATM withdrawal, it manages to be a much more cost-effective option to withdraw cash overseas with it’s competitive exchange rates. An added bonus is that the money is linked to your YouTrip account, so you don’t have to worry about your bank card being abused.

7. Doubles Up as an EZ-Link Card

Even when you’re back from your crazy adventures, you can use the card in Singapore! YouTrip is compatible with Ez-Link technology, soou can use it as a travel card for buses and MRTs. Unlike most bank issued travel cards, and the standard Ez-Link card issued in Singapore, you can even use the YouTrip card for public transport in Hong Kong.

Note that you need to top up your card within the app, as it can’t be topped up at the General Ticketing Machines and Bus/MRT Interchanges. This might not sit well with you if you are used to topping up at the ticketing machines, like I do. Unfortunate, and I hope that this will be changed in the future. But in the meanwhile, it’s still quite convenient!

Have you ever experienced the fear and hysteria that accompanies losing your bank cards overseas? Well, I hope you haven’t and never will. In the unfortunate event that you do though, all you need to deactivate your card is to press a single button on the app. This will immediately deactivate your card, so you need not worry about fraudulent use.

I have to be brutally honest and let you know the gripes I do have with the card. Luckily, there are only a few!

For one, using YouTrip means that I will miss out on credit card point accumulation, or other perks associated with usage of other cards. You can try to minimize your losses here by booking big ticket items like flight tickets or entry passes with your bank cards, then leaving your daily expenditure to YouTrip.

Similarly, you won’t be earning interest on the value you have stored. But you wouldn’t really be putting a large sum inside for a long period either, so this really isn’t a glaring issue.

Some of you out there will point out that I could get better exchange rates if I search hard enough amongst the various money changers in Singapore. While I have to admit that some money changers do offer a slightly better rate, I need to point out that the difference is usually negligible, especially if you change amounts less than S$5,000.

Furthermore, YouTrip allows you to lock in the best exchange rates for selected currencies in real time and at your own convenience, which could result in even better rates than physical money changers!

You do need an internet connection to be able to top up the card or exchange currencies, which might become a small problem if you go exploring places off the beaten track. Try to avoid this issue by exchanging what you need before traipsing off!

Furthermore, more rural areas and smaller towns may lack universal support of Mastercard, so you might need to draw out cash for use in these places. Just make sure to do your homework to estimate how much you need, and to use YouTrip’s overseas ATM cash withdrawal feature before going off.

Lastly, it’s usually quite hard to use up every last cent you have stored inside the app, if there is any reason for you to stop using it. I did find a way to get around this though – even if, say you have S$30 left in the wallet, you can simply use it as a travel card in Singapore which should help whittle the “lost” balance to less than a dollar.

Signing Up for YouTrip

The signup process was pleasantly simple. I just needed to download the application from the Google Play Store or App Store onto my mobile device.

When I opened the app, it prompted me to fill in my personal particulars after verifying my contact number. Just a few taps and I was done – in fact, YouTrip boasts that the registration process can be done in 3 minutes flat! While I took slightly longer than that, it’s definitely a very streamlined process that anyone with a phone number and internet connection can do.

Do note that you need to be a Singaporean, PR or foreigner legally residing within Singapore to use this card, because you’ll need to submit a picture of your identification documents for YouTrip to verify.

After a successful registration, you’ll receive a message from YouTrip telling you that everything is going well. Rest assured that your card will be mailed to your doorstep (no need to inconvenience yourself with collection) within 7 to 12 working days!

The best part is that signing up and getting the card is totally FREE. Yes, you don’t even need to pay an administrative fee to get started! No need to bother with paperwork, no need to fork out a small sum to start using the app, so there’s nothing holding you back from giving it a shot!

One more thing! As a thank you for being part of the Bel Around the World community, we have collaborated with YouTrip for an exclusive promo code “BELARDTHEWORLD”.

Just use “BELARDTHEWORLD” when signing up to receive a S$5 credit!

I was pretty excited when my card finally arrived. It came in a really cool package where you pull a tab for the card to pop out! I’m still quite amused by it.

One very important thing to note (that most people won’t tell you) is that you need a valid credit or debit card that can be linked to your YouTrip card before you can actually use it. Make sure the card is issued locally so you can avoid any overseas transaction fees!

Both VISA and MasterCard are supported here, so there isn’t a need to worry about whether your credit and debit cards will work.

In conclusion, YouTrip markets itself as a convenient and cost-effective prepaid digital wallet for use by digital nomads, the casual traveller, as well as the budget backpacker.

With support of 150 different currencies pegged at competitive wholesale exchange rates, you really won’t be losing out if you choose to use YouTrip. Furthermore, a 24/7 Currency Exchange function for the 10 most popular world currencies ensures that you get to lock in the best rates for future use.

YouTrip is easy to sign up, free to use, and incurs few to none of those pesky annual fees or hidden costs. There isn’t any sunk cost to giving it a try apart from 5-10 minutes of your time.

Download YouTrip today and travel with peace of mind, knowing that you’ll have easy and secure access to your digital wallet no matter which corner of the globe you’re at!