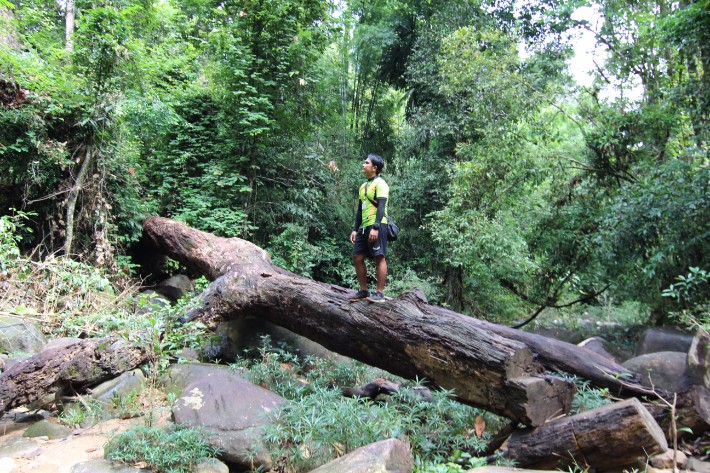 One With Nature at Khao Sok National Park, Thailand

Khao Sok is a nature heaven for all.

Strategically located near two popular tourist cities, Phuket and Krabi, and in close proximity to cities like Khao Lak and Surat Thani, it’s slowly gaining attention from not just Thais but travellers from across the world. 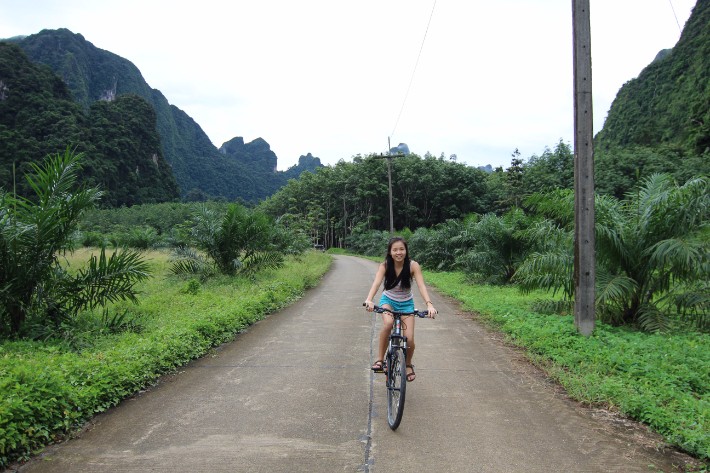 Through staying at Anurak Community Lodge, the adventurous side of me embraced the idea of exploring the village on wheels, which is one of the tours offered by them.

I went on a cycling tour around the village, while my guide shared how latex is taken from a rubber tree, how palm oil is harvested and how coffee is grown. 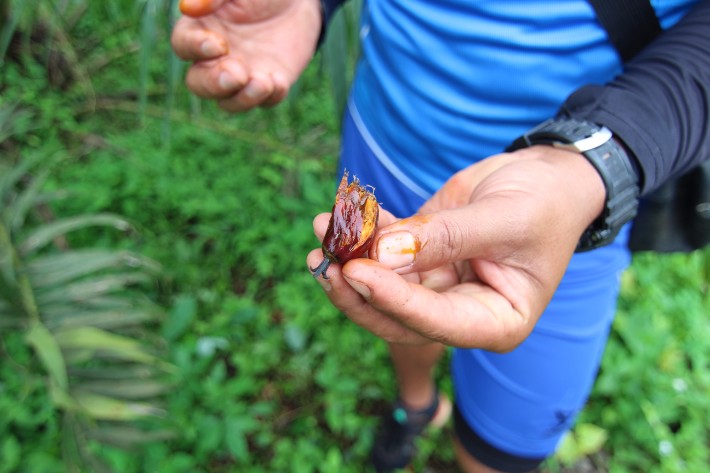 Oil from the palm seed 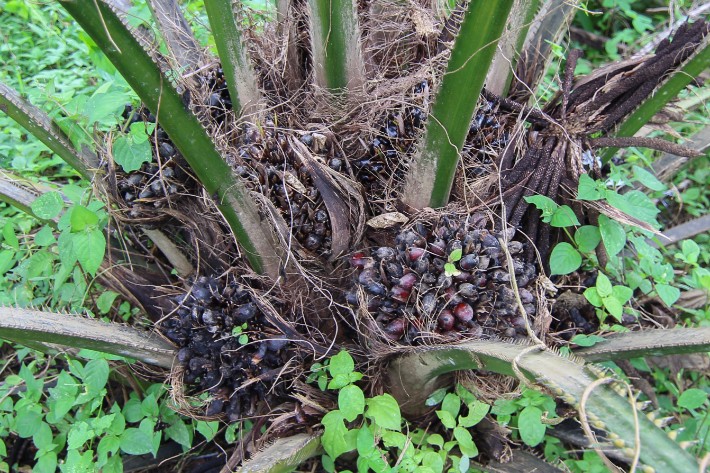 Seeds from which palm oil comes from 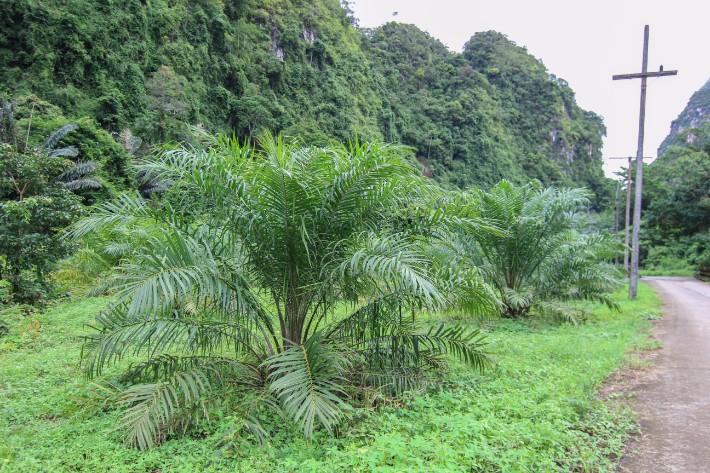 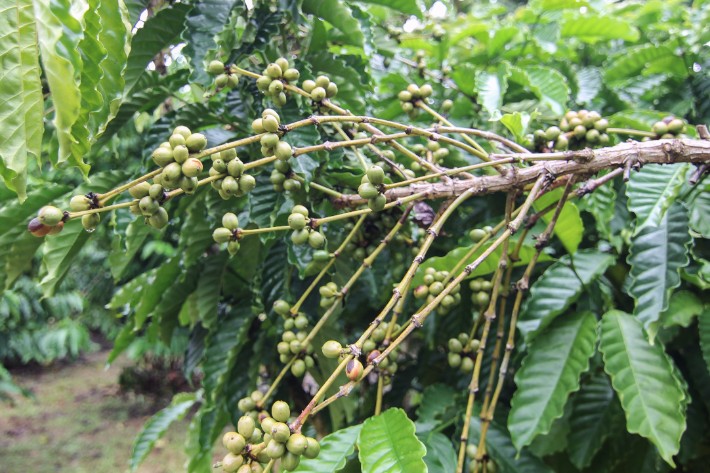 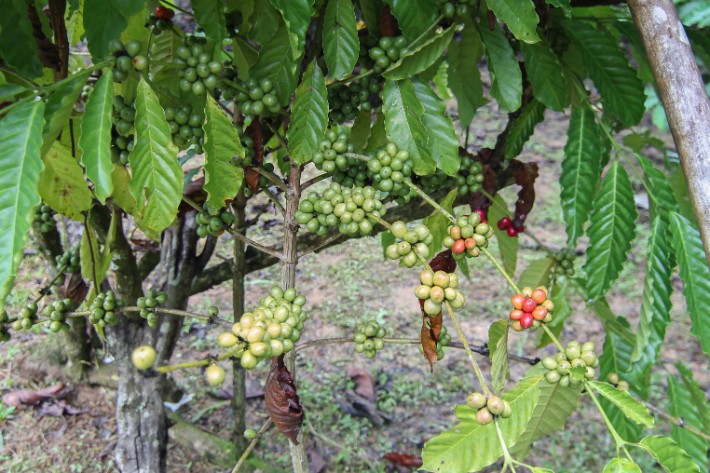 It’s as interesting as it is insightful. Sure, I’ve seen rows of rubber trees while cruising on the road when I used to do road trips with my families in Malaysia in my younger times, but I had never gone up close to watch these farmers in action as they tap and harvest the latex from these trees before. 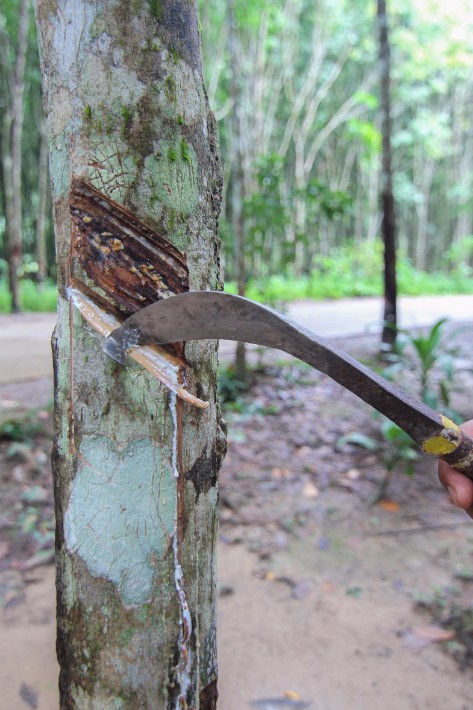 Watching my guide tap on the rubber tree and collect latex 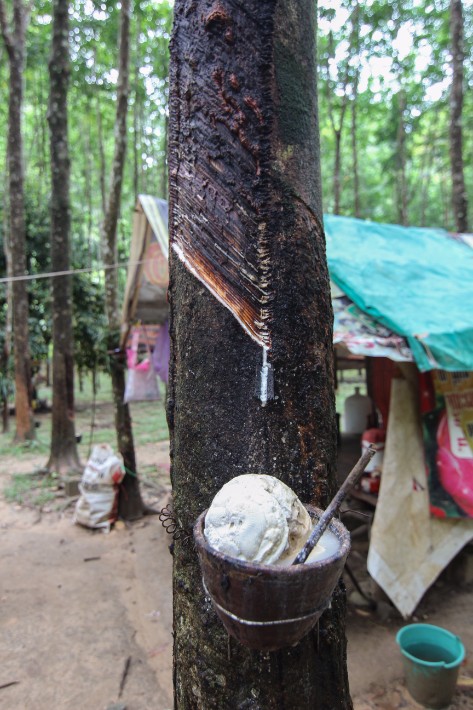 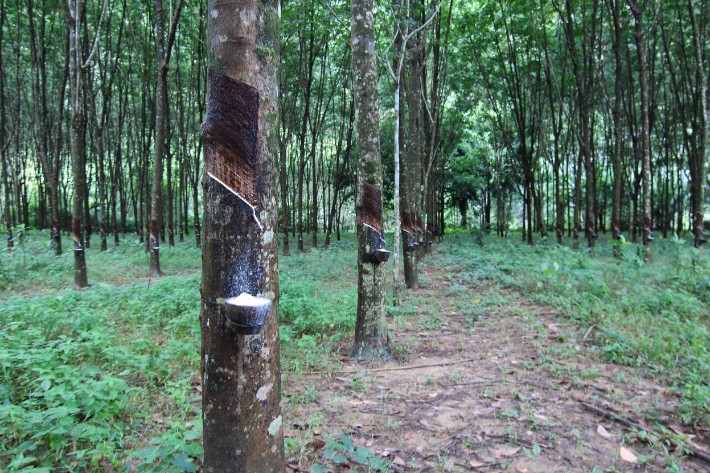 This time, I watched earnestly as my guide cut the rubber trees bark with expertise and how the latex seemingly appeared from nowhere and started trickling down the freshly cut strip. 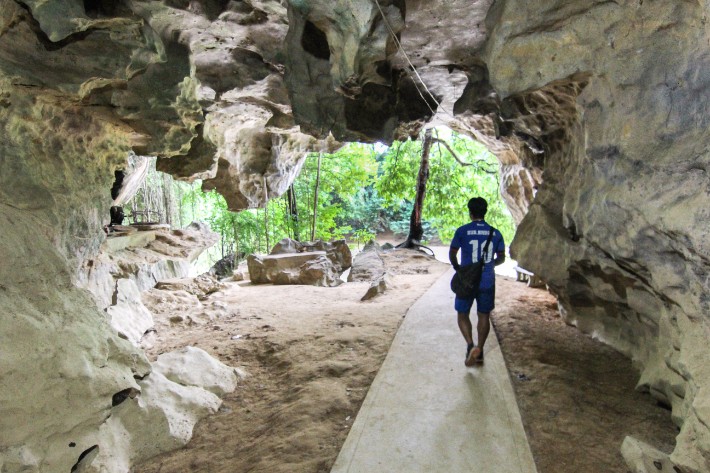 The cycling concluded at Wat Tham Pla cave, a former residence of monks. Yes, monks used to live in these caves! Living here meant they were subjected to harsh, external weather conditions. Since this cave is next to a large body of water, the extensive rainfall during the monsoon season sometimes flood the cave, forcing them inland to escape. 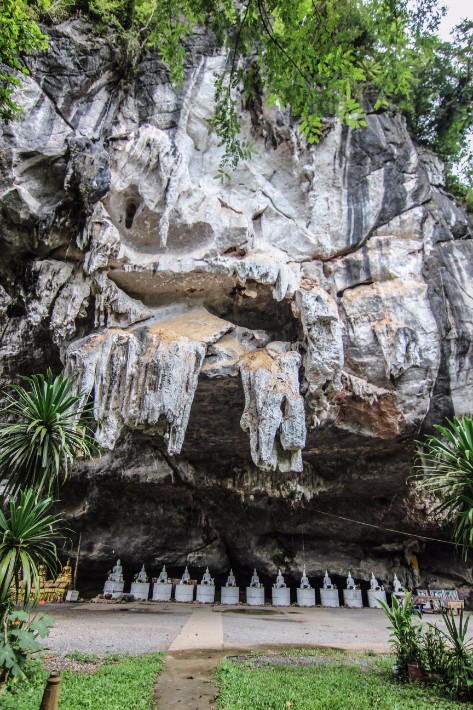 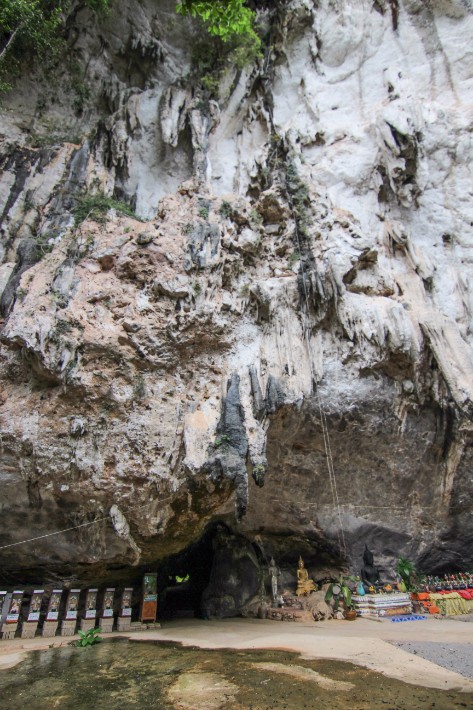 Being a lover of natural rock climbing, I couldn’t help but admire the limestone rocks that make up Wat Tham Pua cave and stretches all the way to the sky. 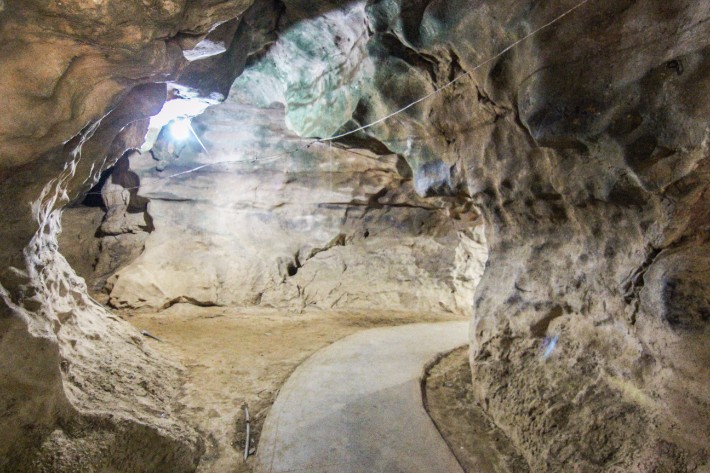 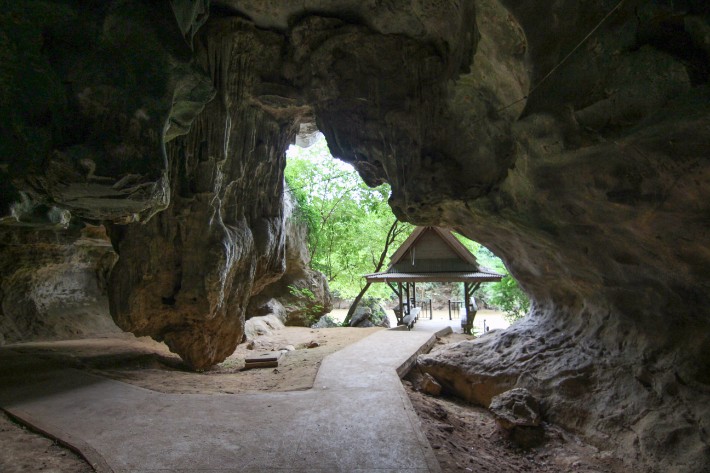 Today, the cave houses a small shrine, where locals sometimes gather to pay their respects. As the evening wounded down, my guide took some fish food and brought me to the river behind the cave to feed the countless of ferocious Red Tail Carps that hide underwater. 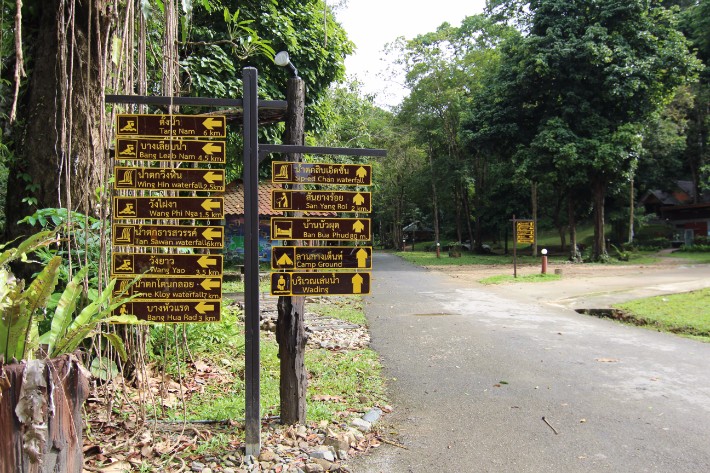 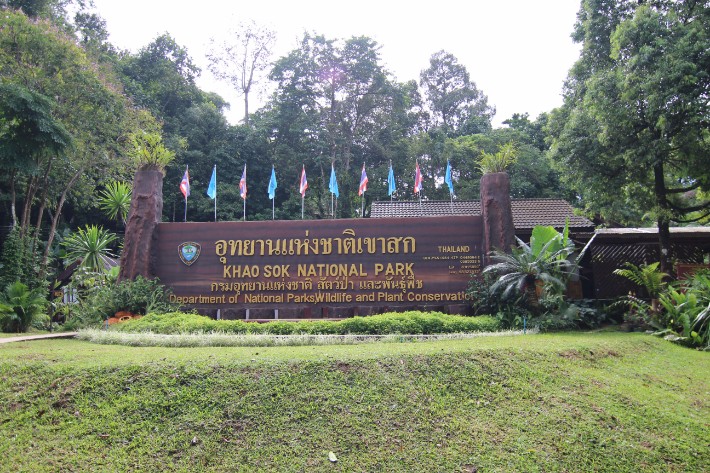 Covering an area of over 739 square kilometres, Khao Sok National Park is home to a wide range of flora and fauna, the most well-known ones being Rafflesia and pitcher plants. Khao Sok has over 215 species of floral species per hectare of land. That’s impressive, considering how, in Singapore, I rarely see that much diversity. Staying in Khao Sok meant visiting this national park was a definite must! 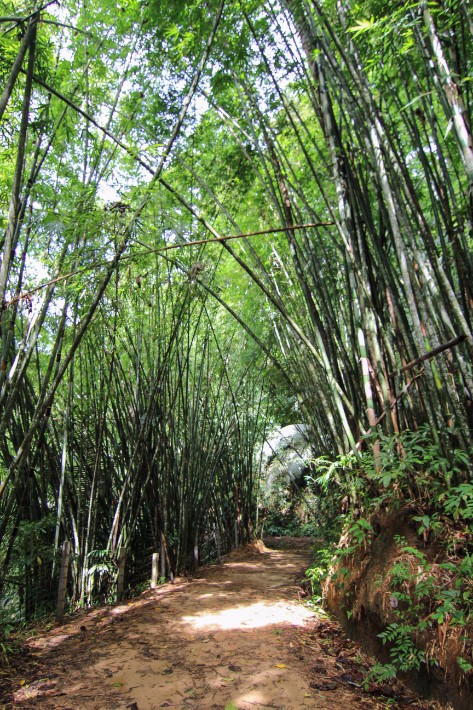 Along the way, his years spent in the forest had him develop a keen eye for spotting jungle creatures. He told me he even climbed up the high cliffs with the support of NOTHING (no harness!) to look for fruits in his free time. That’s some dangerous Tarzan business!

He pointed out the agile monkeys high up in the trees, and a tarantula’s nest in between the soil crevices– a wild tarantula! It’s a pity I didn’t get to see the real spider come out of its nest.

If you had seen the monkeys in Bali and Krabi who snatch tourists’ belongings (or been the subject of these monkey pirates) and scamper around the bins looking for food, you would think monkeys aren’t averse to humans.

Rather, wild monkeys who rely on the jungle flora and fauna for food (not tourists’ leftovers) are actually naturally afraid of humans, hence it was a challenge spotting them from atop the canopy.

As we strolled, the trail became less apparent, and before long, we were stepping over twigs, crouching under fallen trunks and avoiding leeches. We even had to balance on a fallen trunk on one leg of the trek! If not for my experienced guide, I would have easily gotten lost in this dense national park. 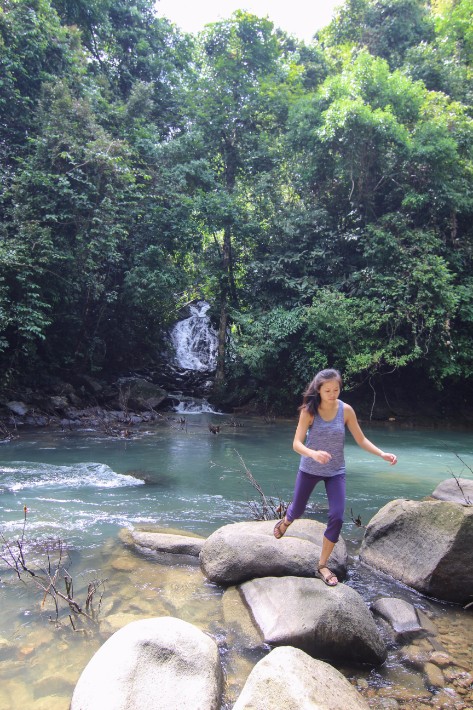 Mini waterfall behind me

He brought me to see a mini waterfall, and as we reached the furthest point of our trek before turning back, the guide, as promised, took me to a river where no one seemed to have trodden.

Together with the monitor lizard (so they swim too!), we swam in this river stream named Wang Yaw. My past swimming experiences are limited to swimming pools and lazy rivers (also man-made). Hence, that moment when I was drifting in the river flow felt as natural as I had ever experienced in my lifetime.

I may have swum in the valleys of Philippines, frolicked around Maldives’ beautiful atolls and snorkelled in the aquamarine Flores sea, but there is a certain sense of tranquillity and rawness in swimming in an untouched river stream, along with fishes and water striders.

At one point, I asked my guide if there might be crocodiles living in the water, and the paranoia thought of what would might happen should I get swept away by the stream did come to my mind.

After cooling off, we were back in our hiking attire and concluded the morning with glee.

The weather was in our favour, and it only started to shower as we neared the end of our trek. Mind you, the rain in Khao Sok is so frequent and unpredictable, so I considered myself to be very lucky to have avoided it all.

Opening hours are from 8am to 6pm.

Rental of tents and sleeping bags are also available at the office. 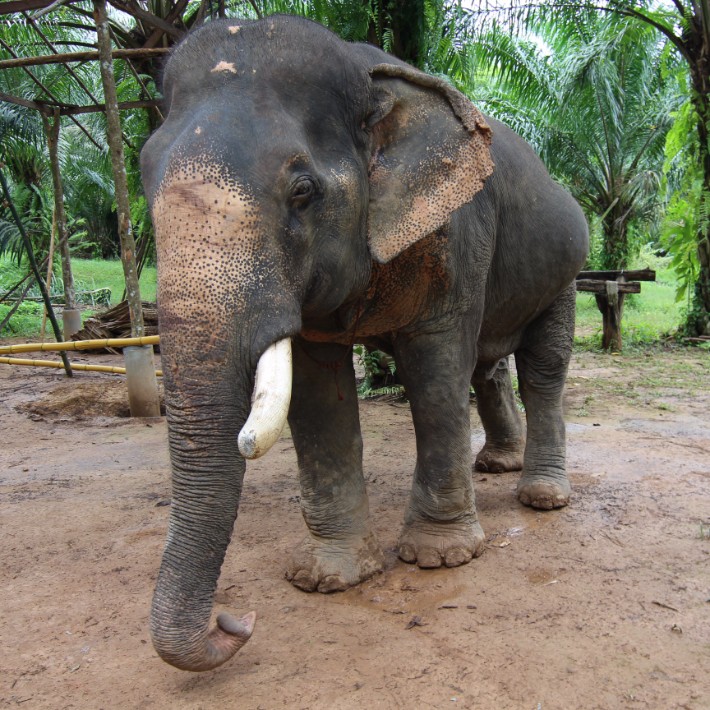 I visited an elephant sanctuary at Sonchana farm, owned by a local family. This was where I met Somboon, a 55-year old retired elephant. His life had not been all that merry before this.

Having been the subject of tourism trade, he was one of the elephants used for ferrying tourists around, subject to their poking, and he often worked endlessly without rest.

Until one day, he contracted an infection on his back from the countless of hours toiling and carrying passengers on his back, that people realize it’s time to treat him right.

He was then sent to this sanctuary for treatment until he was healthy, well and pampered today. 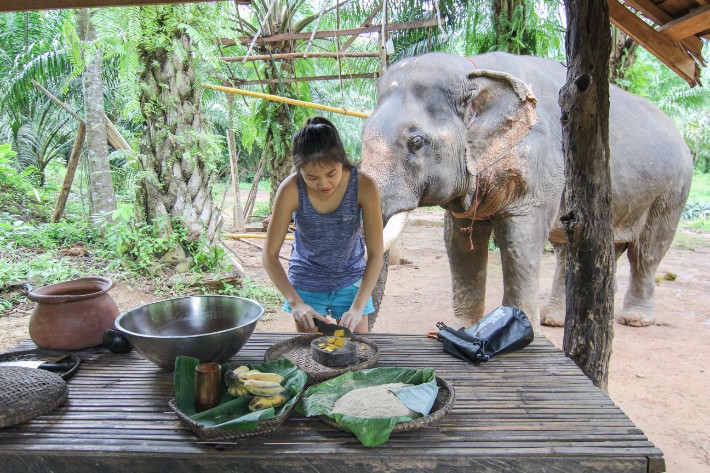 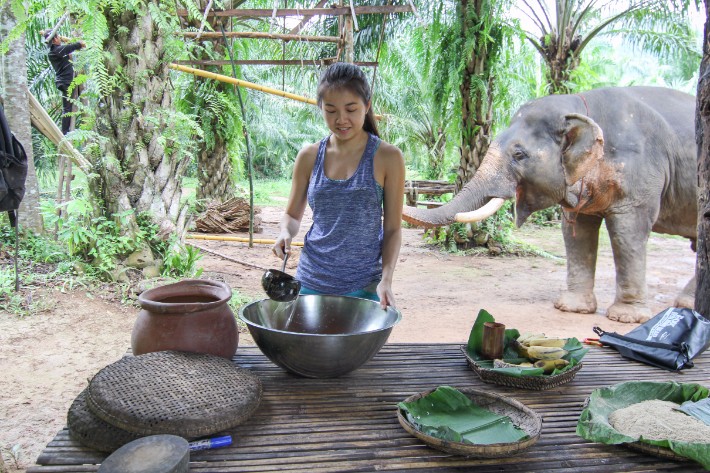 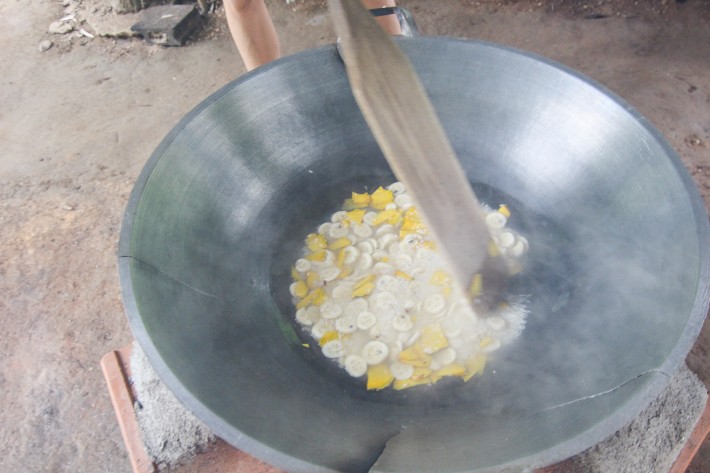 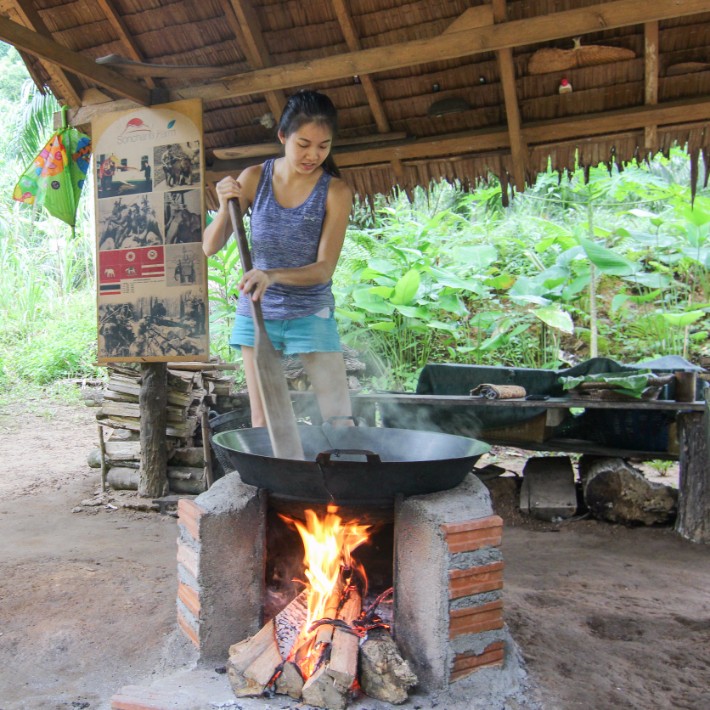 I got my hands dirty cooking nutritional rice balls for him. The balls are made of banana, pumpkin and sticky rice, mixed together and thrown into a large stove. After it turned to mush, I rolled them into balls and began feeding them to him, much to Somboon’s anticipation. He sure worked an appetite the whole time while watching me prepare his food!

Because of their superb speed of digestion and the lack of hunger signals, they can eat endlessly. Did you know, elephants poop up to 50kg worth of dung?

Elephants were once used as comrades to war (much like how the Chinese use horses) and hence, they are treated favourably by the royal family. The king himself has a personal elephant. 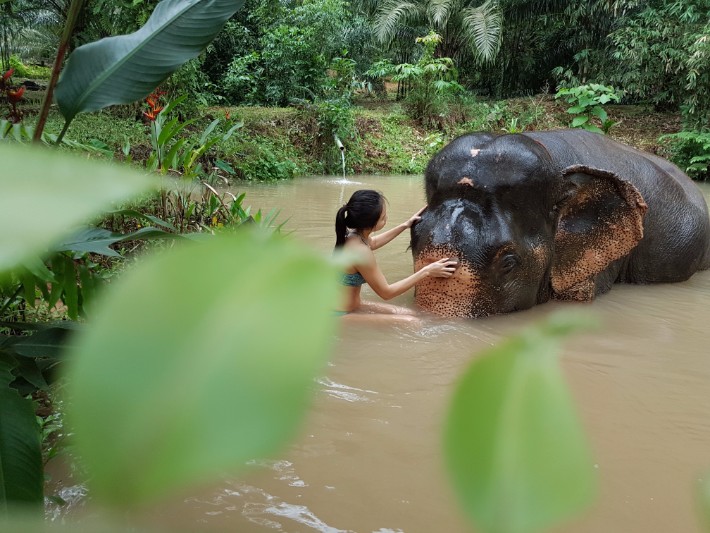 We later moved to the fun part – bathing with him! Through a series of elephant commands in Thai, the obedient Somboon made his way to a pit that is filled with water. Along the way, he greedily picked on leaves to munch on.

After a series of splashing with Somboon, I took on my task seriously as I scrubbed him clean (I hope?) with the insides of a coconut husk. I highly questioned by ability to, what with the thick elephant skin and my feeble strength. 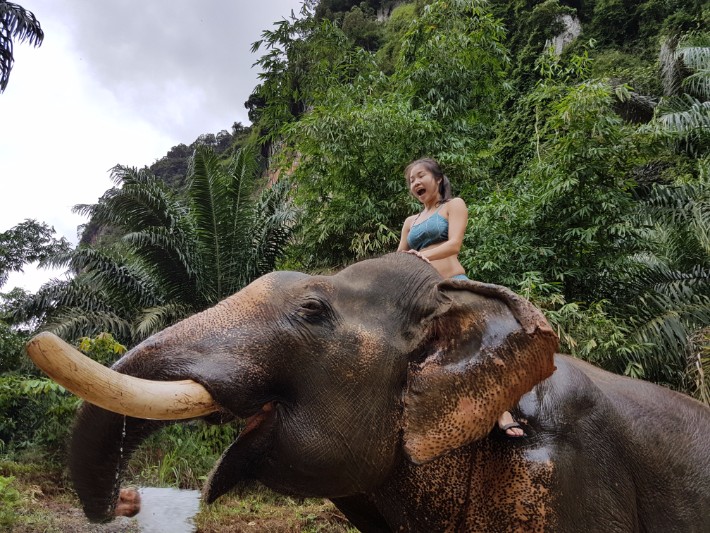 Hello Somboon, are you happy with my scrubbing?

Given that I had never been so up close with an elephant bathing them before, I sure had a good time. Judging from the look of Somboon, he is either utterly unamused by my scrubbing work or enjoying it.

Through the extended time I’d spent with my guide, I’d learned more about this tiny village that is home to about 350 villagers.

Everyone knows everyone on this village. Most homes will have a dog, to guard their home. They lead a very simple life, and my guide is a fine example of having lived and loved his village all his life.

His down-to-earth demeanour is reflected in his contentment with simple pleasures, and respect to others. Even though he had been to other popular towns of Thailand like Krabi and Phuket, he chose to return to nature, his true home.

Despite being able to earn more as a tour guide in these touristy islands, he prefers living simply in Khao Sok, running in the mornings and playing football with his friends come evening, while occasionally taking foreigners like myself to go bird-spotting in the forests and introducing the flora and fauna around.

He truly commands a great deal of respect!

Special thanks to Khiri Travel for making this experience possible! All opinions remain my own.

Get your FREE travel expense sheet and track your expenses!