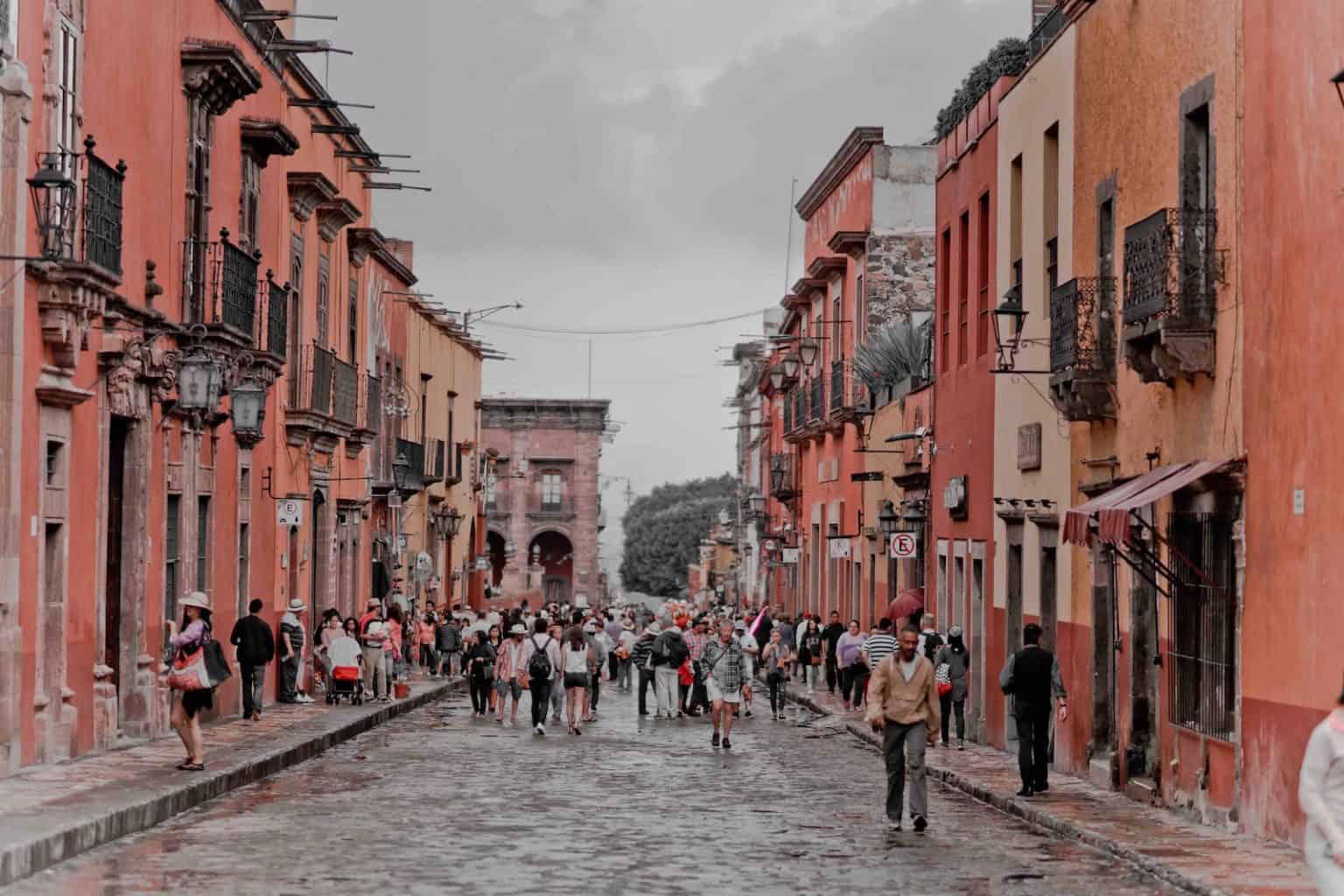 Apart from beautiful beaches, Mexico has a lot to offer. From picturesque colonial towns to Mayan’s forgotten cities, the country is rich in culture and history. This guide takes you through 10 of the most intriguing and beautiful UNESCO World Heritage Sites. 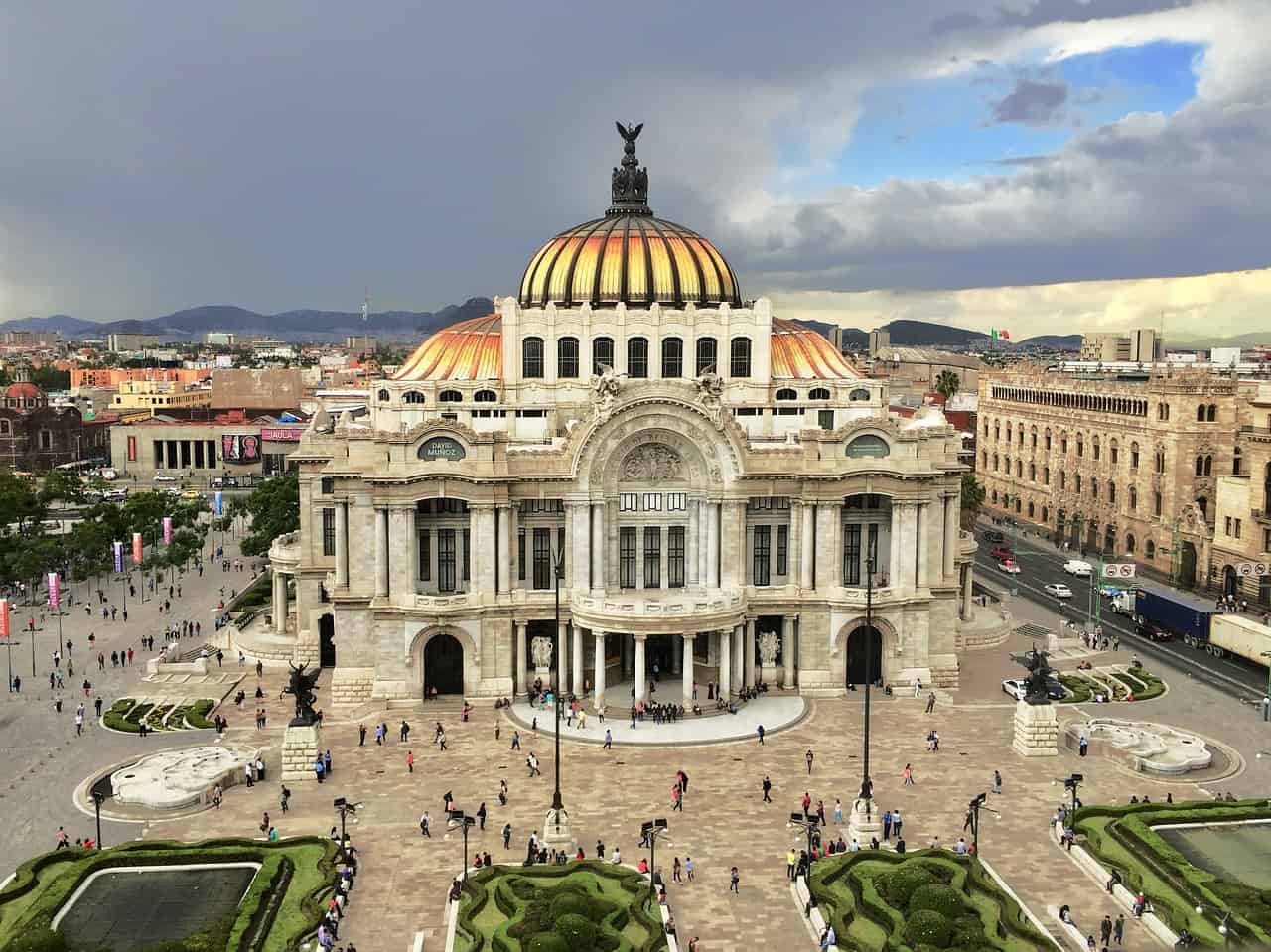 Visiting Mexico City can be overwhelming at times – busy streets, pollution, crimes… Mexico city is a well-organised mess. The city’s interest lie in its rich culture and history, and the best place to learn all about these is in the Historic Centre. Some of the buildings date as far back as the Aztec era.

Spread around the Zócalo, the city’s central square, are several colonial buildings such as the Palacio de Gobierno, the Palacio de Bellas Artes and the Metropolitan Cathedral (which took 300 years to build). A bit farther, in the pedestrian Calle Madero, street food stalls and high-end restaurants await if you want to try some local delicacies.

Later, have a look at the Templo Mayor, made by the Aztecs and destroyed to build the cathedral, only the foundation and a few carvings remain today.

A full day is enough to visit the city highlights; you should take a walking tour with a guide so you can learn more about the city’s past. 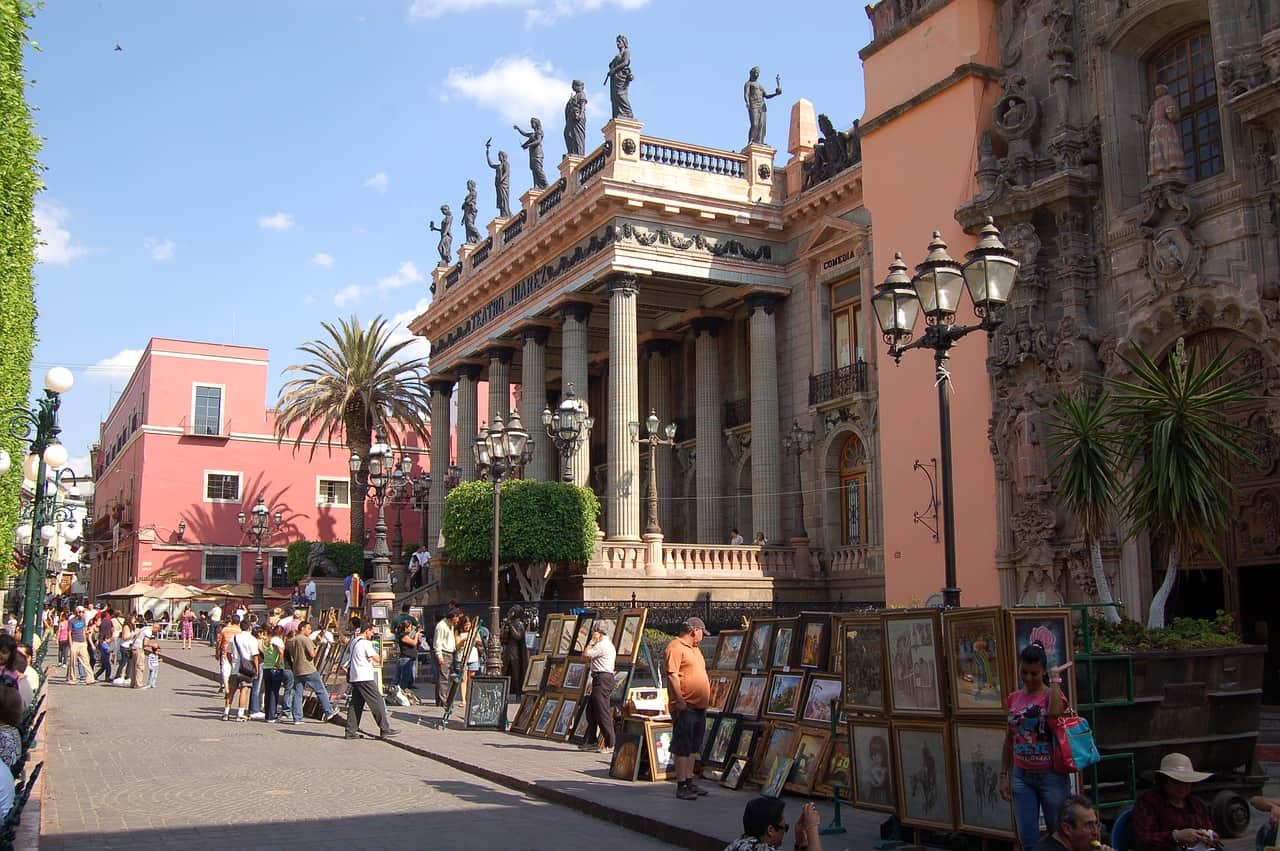 Not far from Mexico City is one of Mexico’s cutest town: Guanajuato. Its historic centre is a UNESCO World Heritage site since 1988 and is a true treat for the eyes.

Guanajuato was founded in the 16th century by the Spaniards. Rich in silver, it quickly became an important town. From its mining past, you can explore its subterranean streets and the 600-metre-deep mineshaft known as the Boca del Infierno (Hell’s mouth).

The centre is filled with Baroque and Neoclassical buildings, which inspired many Mexican architects in other cities. The churches of La Compañía and La Valenciana are considered to be the most representative of Baroque architecture in Central and South America.

Stroll around the small intricate streets and gaze at the colourful houses, colonial buildings and street art. Don’t miss the breathtaking view over the city as you get going up the Monumento al Pipila.

Several agencies offer day tours from Mexico city, but it’s better if you can spend a night here, as it takes around 4 hours each way. 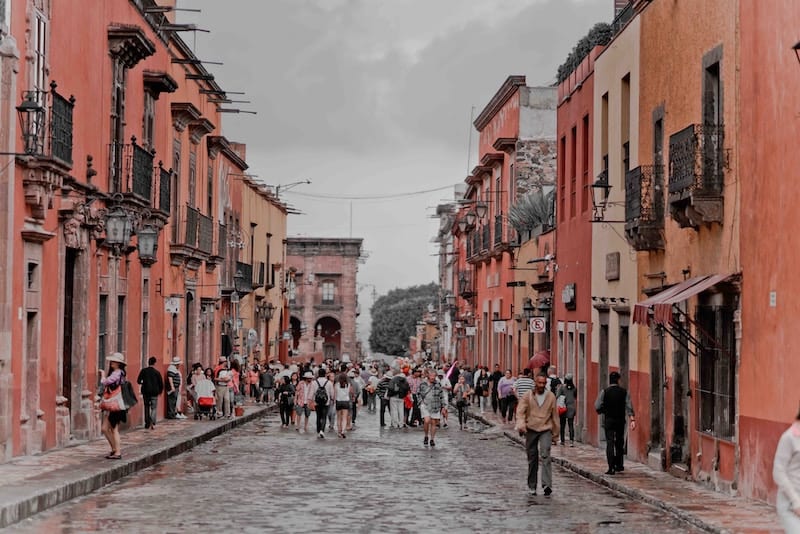 Near Guanajuato is another heritage site: San Miguel de Allende. Before the Spaniards took possession of it in the 16th century, the city used to be an indigenous Chichimeca village known as Izcuinapa.

San Miguel de Allende is known for its colonial architecture, delicious food and as an art hub. Many consider it as one of the best places to visit in Mexico.

There, you should have a look at the Plaza Allende (El Jardin). This French-style square is where you’ll get a pulse of the city, surrounded by colourful buildings and filled with street food vendors and artists. From there, you can walk up to El Mirador to get a superb view of the city.

Then, visit the Parroquia de San Miguel Arcangel, a Gaudi-inspired church built in the late 19th on the remains of a 17th-century church.

If you like art and crafts, you can visit the Fabrica La Aurora or the Mercado de Artesanias. 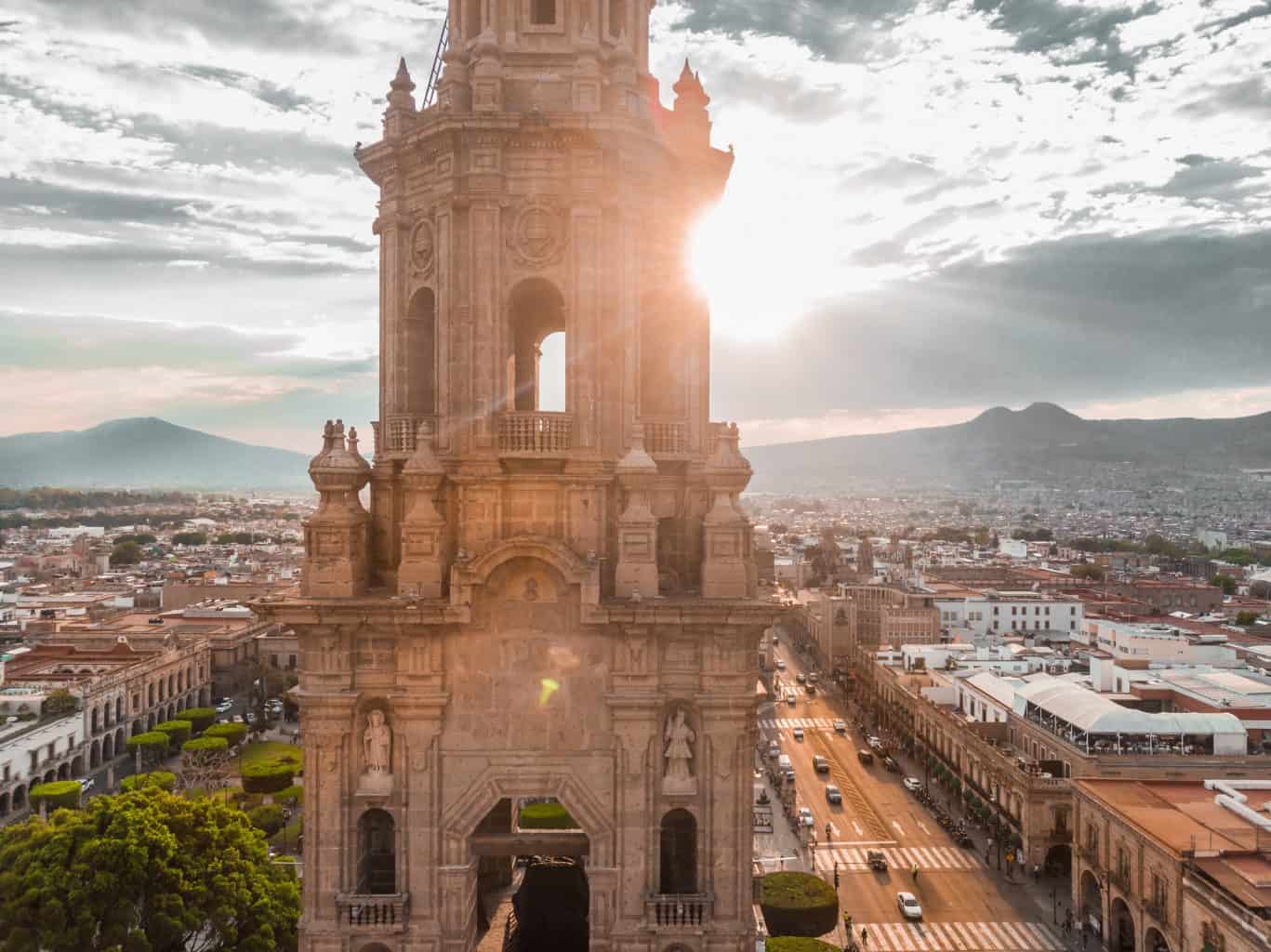 Located between Mexico City and Guadalajara, Morelia is a blend of Renaissance Spanish and Meso-American architecture styles. Built on a checkerboard layout, the city perfectly adapts to the area’s hills and slopes.

Morelia has been incredibly well preserved with more than 200 historic buildings still standing. Interestingly, they are built using pink stones, typical of the region. The city also played a crucial role during the country’s fight for independence.

Take a stroll through the city centre and don’t miss the cathedral, the aqueduct, the government palace, the public library, the Palacio de Justicia, and the Conservatorio de las Rosas (an ancient convent).

There are also several museums you can visit to learn more about the history and culture of the area, such as the Museo de Arte Colonial, the Casa de Morelos and the Museo Regional Michoacano. 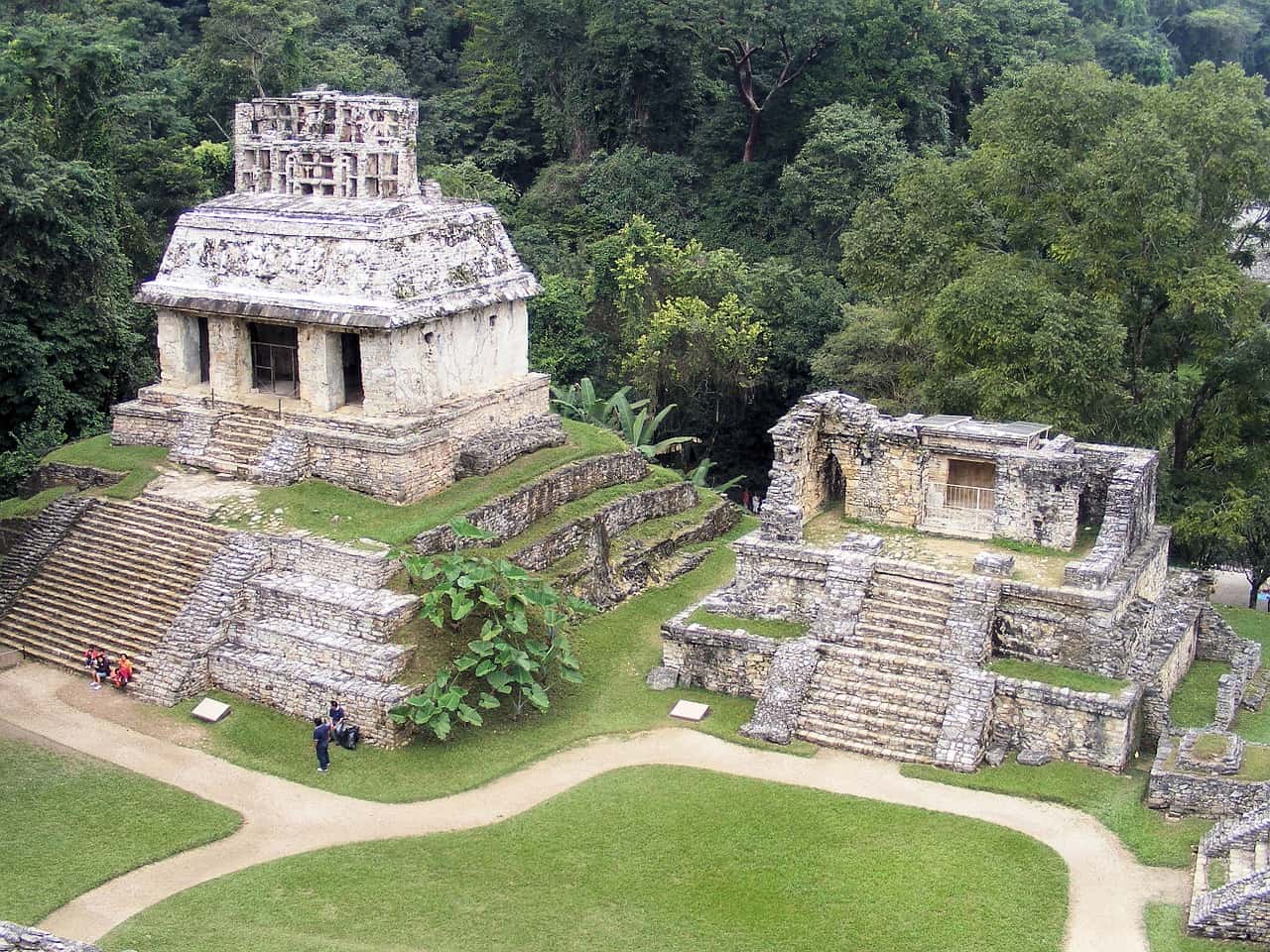 Palenque is an ancient Mayan city located in Chiapas. Smaller than many other Mayan sites (only 10% of the site has been excavated), it’s also one of the most interesting ones, with a vibrant architectural style.
Originally called Lakamha, the city flourished between 600 and 750 CE and was abandoned before the Spanish conquest.

Usually, in Mayan towns, at the centre you’ll find a temple. In Palenque, however, a royal palace stands. This palace is one of the most complex and intricate buildings left from the Mayan Era.

As only 3 Mayan books remain in the world today, the inscriptions found on site has helped people get a better understanding of Mayan history.

To get there, you can either take a bus from nearby cities (easily accessible from San Cristobal) or fly from Mexico City, Cancun or Tuxtla Guttierez. The entrance fee is 70 pesos. There’s a lot of walking involved so take good shoes, sunscreen and mosquito repellent.

Only 50 kilometres from Mexico City, the ancient Mayan city of Teotihuacan – which translates to “where the Gods were created” – awaits. The structures and pyramids there are the biggest ones from the Pre-Colombian era.

At its pinnacle, the city counted between 25,000 to 100,000 inhabitants. From the first to the 7th century, Teotihuacan developed into the largest city in America. Its origin remains a mystery, but traces of Mayan, Aztec, Mixtec, and Zapotec civilisations have been found.

Like many ancient cities in Mexico, the town’s layout and architecture are designed around astrology and cosmic harmony. Amongst the most impressive buildings are the Pyramid of Quetzalcoatl (the Plumed Serpent) and the Temple of the Sun and the Moon.

To visit Teotihuacan, you can either book a tour from Mexico City, rent a car or go by public transportation. Buses leave from the Autobuses del Norte station. The entrance fee is 75 pesos. 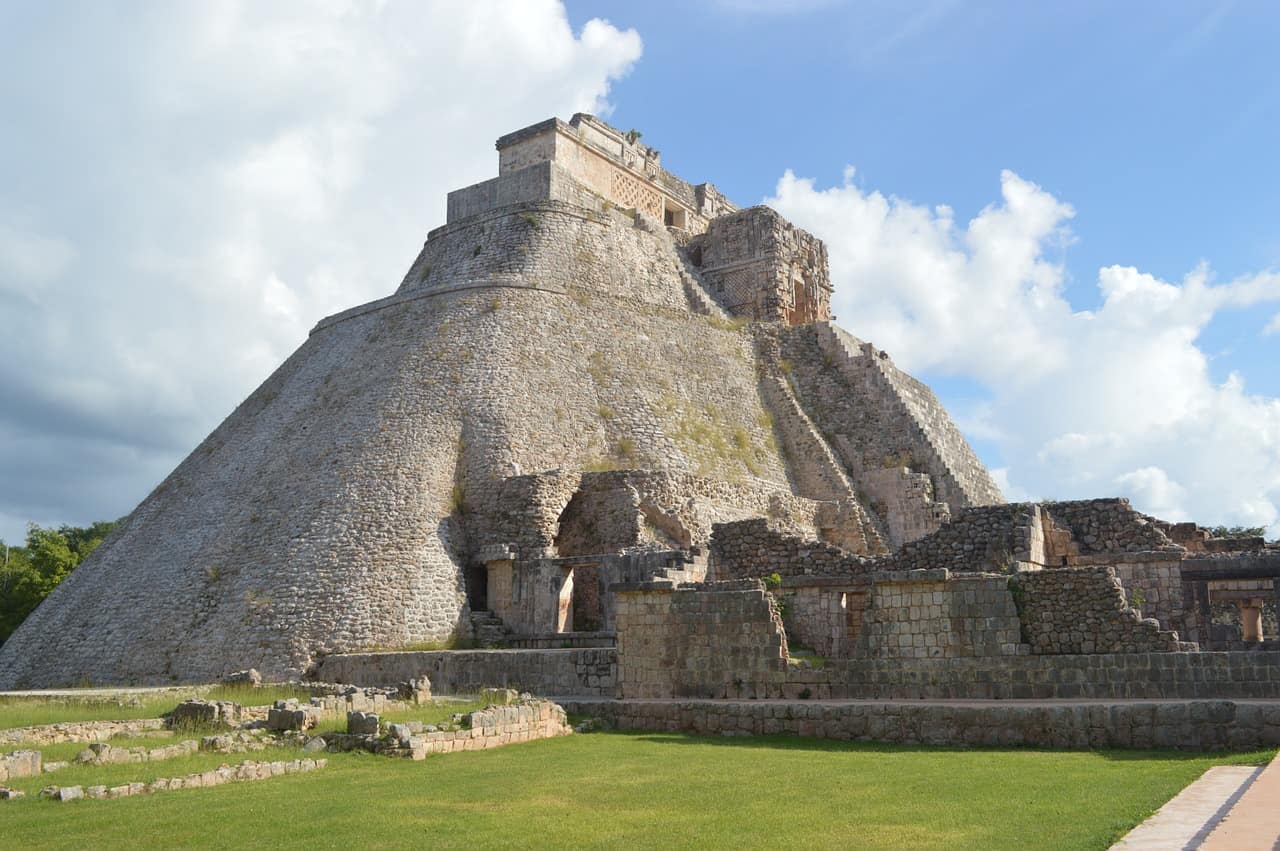 Uxmal was a Mayan city which flourished from the 6th to the 10th century. It’s one of the best preserved Mayan towns; it has been extensively renovated.

Contrary to most Mayan cities, it wasn’t affected by the 900 AD general collapse and stayed a major city until the 14th century. Mayans abandoned the city around 1560.

The architecture is typical of the Puuc style, with arched doorways and fortification walls. Amongst the main buildings still standing today are:

Uxmal can easily be visited from Merida. You can either book a tour, rent a car or go via ADO buses. They have a tourist route, stopping in Uxmal and Ruta Puuc. The entrance fee is 413 pesos.

8. Prehistoric Caves of Yagul and Mitla 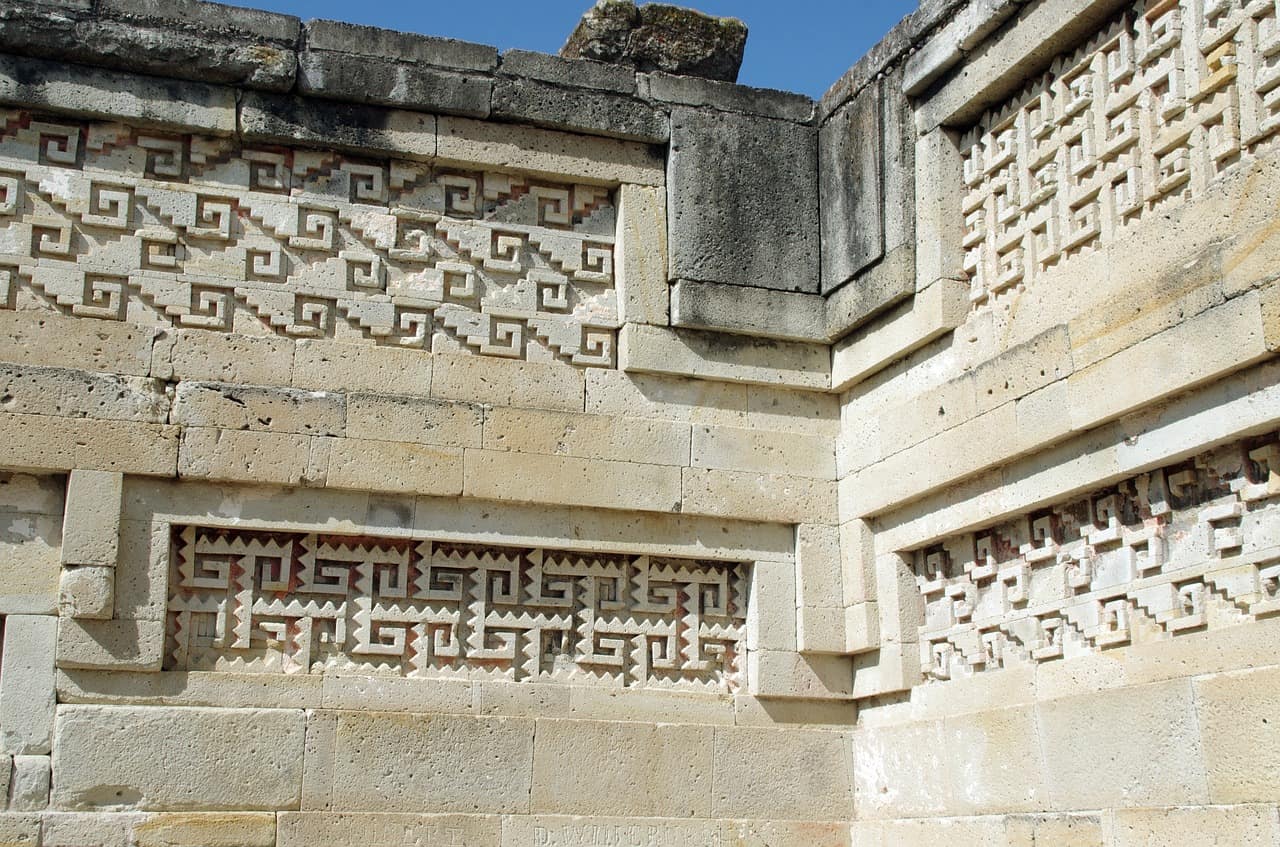 The prehistoric caves of Yacul and Mitla, located in Oaxaca, are archaeological sites related to the Zapotec civilisation. This area is where farming first appeared in North America. One of the caves, Guilá Naquitz, still contains traces of hunter-gatherers dating from 8000 to 6500 BC.

In Yagul and Mitla, you’ll also find archaeological ruins from the Zapotec civilisation. Mitla used to be the most important Zapotec city after the decline of the capital Monte Alban (700 – 900 AD). The site is famous for the Hall of the Columns, a huge rectangular building beautifully carved with geometrical patterns.

Yagul is a Zapotec city from the Postclassic period (800 – 1521) and used to be an independent city-state. Excavation works helped understand this era and civilisation better. Amongst the ruins that can be seen today are the fortress, the ceremonial centre with the Palace of the Six Patios and the ball court.

To visit the caves, you’ll need a guide because they’re hard to find on your own, and it’s not organised for tourism. Most people only visit the archaeological sites and not the caves.
It’s worth noting that it’s not just two caves; the whole area is filled with caves, some of which are hard to reach. Both sites are hard to reach with public transportation (but still doable), so you should rent a car. 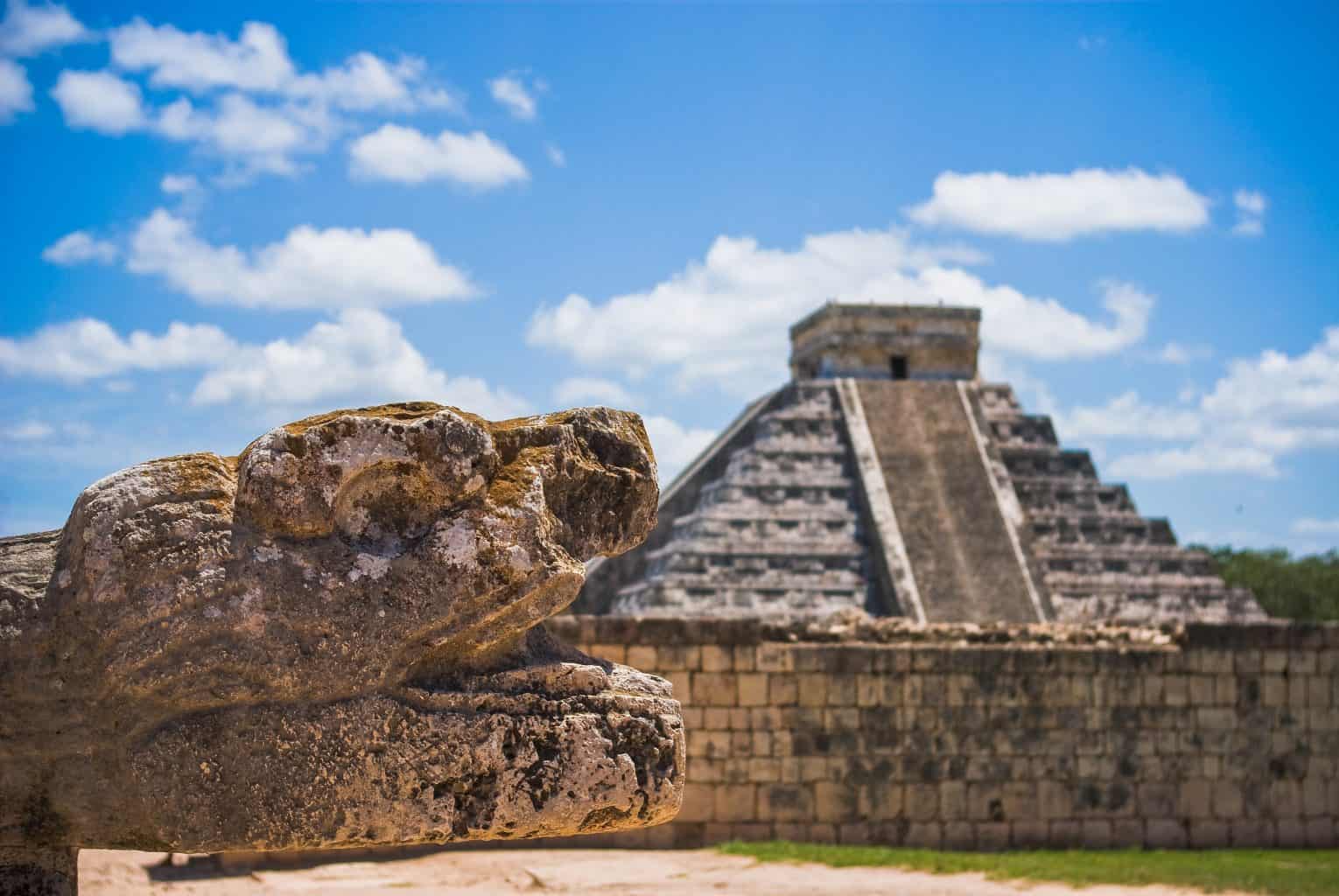 Chichen Itza is one of Mexico’s major site and is known all over the world. Like most Mayan ruins, the city is surrounded by mysteries. At the time when Chichen Itza was built, Mayans didn’t have any wheeled equipment or any tools made of metal which is impressive considering the size of the stones they used to build the city.

No archaeologist can tell why the Mayan left and abandoned the site. There’s no historical data to explain why and what happened. Read more about the mysteries surrounding Chichen Itza.

Chichen Itza means “at the mouth of the well of the Itza.” The Itzas were a Mayan ethnic group and “well” refers to the many cenotes in the area. The city appeared in the 5th century and became a prominent political and economic centre in the 7th century. It was one of the largest Mayan cities, covering two square miles.

The most famous site is the pyramid El Castillo, but Chichen Itza is actually way more prominent. There are tons of buildings to see and learn about. It’s nice to go with a guide so he/she can explain everything about the Mayan culture and significance of each building.

You can easily go to Chichen Itza from Playa del Carmen, Cancùn, Valladolid, or Merida. You can either book a tour, rent a car or go by public transportation (ADO). The entrance fee is 480 pesos. 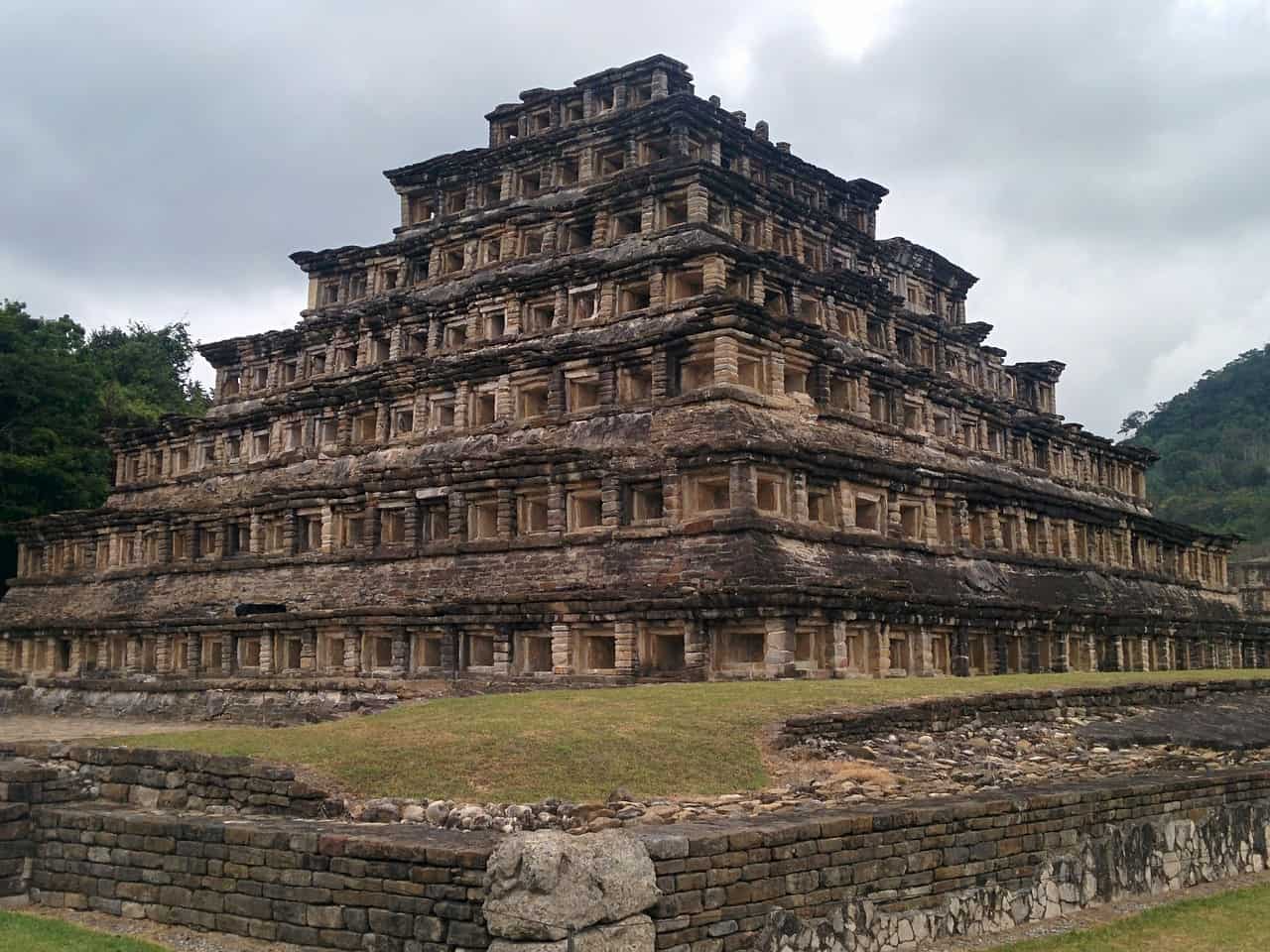 Located in Veracruz, El Tajin is one of the biggest pre-Colombian architectural sites from the Mesoamerica Classic Era. El Tajin reached its pinnacle from 600 to 1200 AD, but traces of civilisation in this area have been dated back as far as 5600 BC. El Tajin survived the end of the Classic Period, until the 13th century when a fire destroyed the city. The site was abandoned and rediscovered only in 1785.

El Tajin means “Thunder”, but the name can also be linked to “place of the dead” or “place of the invisible spirits”. The site is still a mystery since only 10% have been excavated. Most of the buildings’ architecture still astonish archaeologists; it’s like every Mayan city brings a newfound understanding of this civilisation.

Amongst the main buildings are the 60-feet high Pyramid of Niches, the Minor Plaza and the Southern Ball Court.

You can easily get to El Tajin from Veracruz City, either by private tour, bus or car. The entrance fee is around 70 pesos.

Julie has been traveling full time since 2016 and is always on the lookout for great destinations and travel hacks. She shares her best travel experiences on her blog Julie Around the Globe and aims to inspire others to travel more and to places less known.

Get inspired by Mexico!

Group Holiday Ideas to Inspire You