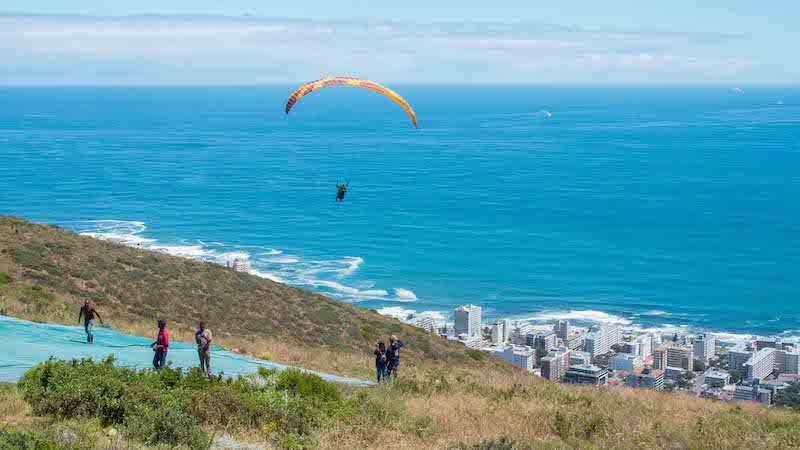 As part of our month-long adventure in South Africa, there was no way I would miss an opportunity to do some adventurous activities apart from going on safari game drives. So when the opportunity to go paragliding came up, I was all geared for it! 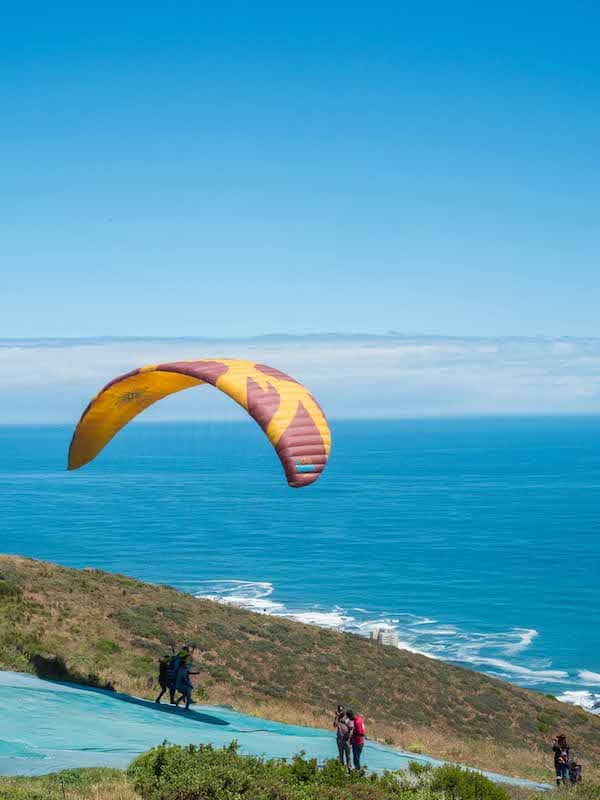 In case you’re still confused on the difference between paragliding, hang gliding and gliding (read my gliding experience in New Zealand here), here’s a brief description of what paragliding is.

Paragliding is the activity of gliding through the air, using only air currents i.e. thermals to propel.

They take off and descend from high altitudes like mountains and cliffs on foot.

Paragliders are attached to a parachute that resembles a canopy. Also known as a wing, glider or canopy, the lightweight material of the aerofoil is designed to capture the air currents and keeps you afloat in the air.

Hang gliders tend to also fly much faster than paragliders, which makes them more challenging to learn. As such, the equipment set up and break down is much easier for paragliders than it is for hang gliders.

Paragliders are equipped with a chair-like harness so that when you’re in the air, you’re actually sitting down and leaning back comfortably to enjoy the ride.

How paragliders control the flight is by pulling on the right and left brake line to steer and change directions. 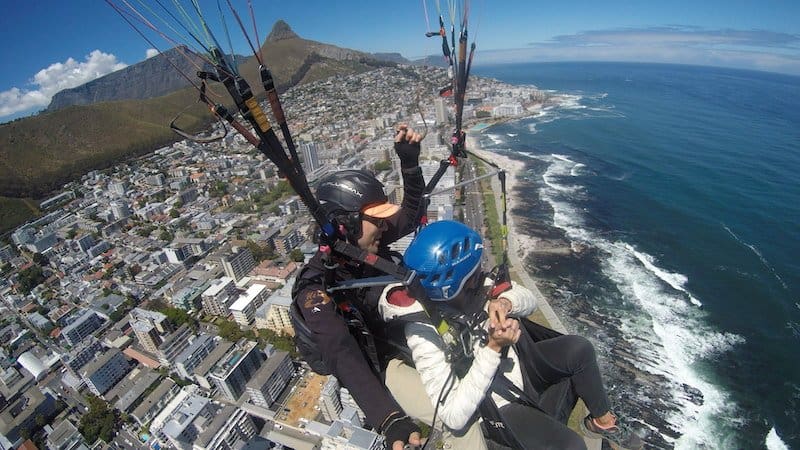 Relying on the wind for the activity, there was no way to ever predict if paragliding will come through. We were only informed the night before if our paragliding in Cape Town is tentatively happening and the rough timing to expect via WhatsApp.

On the day itself, we were informed 2 hours before for the final arrangements. They typically launch from a number of different sites depending on the weather, including Lion’s Head and Signal Hill.

I appreciated how responsive Leandra was with coordinating the trip on WhatsApp up til the minute where we met the crew.

Driving up Signal Road is a challenge because not only is it uphill, the lanes are narrow and very popular for hikers scaling Lion’s Head and other popular treks. You’d have to share your one lane road with incoming vehicles, vehicles trying to park on the road side and random hikers. So, factor in extra time when driving up Signal Hill.

Upon reaching the parking lot of Signal Hill, there already was so much buzz going on. Big tour buses carrying tourists who scamper to the viewpoints, paragliders at the green launch pad preparing for their flights, parking attendants busy directing cars to park.

There are about 13 companies doing paragliding trips and launching off at the same place. Even if you hadn’t booked a paragliding tour beforehand, they also have booths there should you decide impromptu to get in the air! 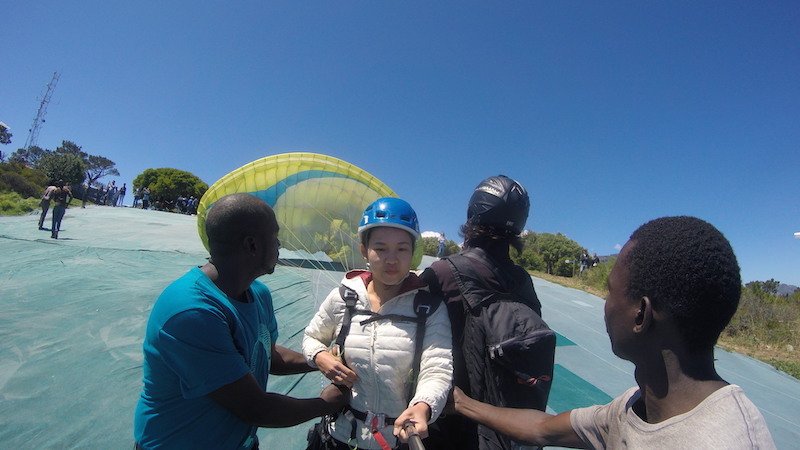 The Hi5 crew preparing me for my flight 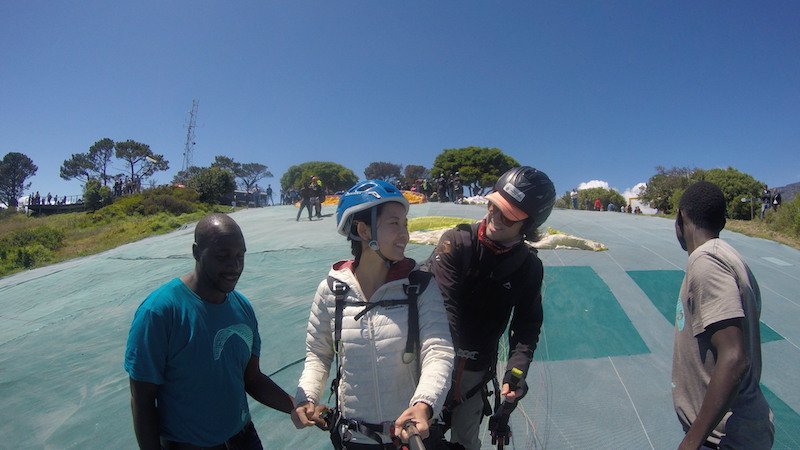 At 11:15am, I was led to Hi5 Paragliding’s team. They very efficiently made me sign indemnity papers and I was equipped in a jiffy with no time wasted. The whole process was very quick and smooth, it’s as if they’ve got their whole business flow down to a T.

Because of the big downpour the day before (yeah, we got stuck right in the middle of it driving from Stellenbosch to Cape Town it was horrible), this day started out fine, with perfect wind conditions in Cape Town. 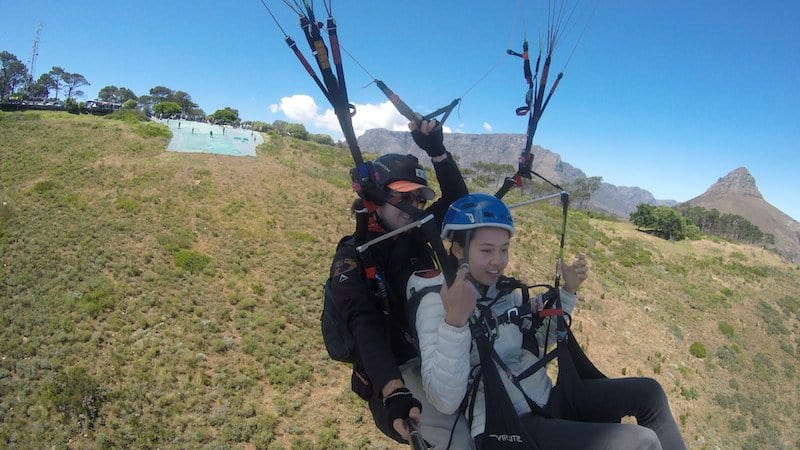 Taking off smoothly with the green launch pad behind us! 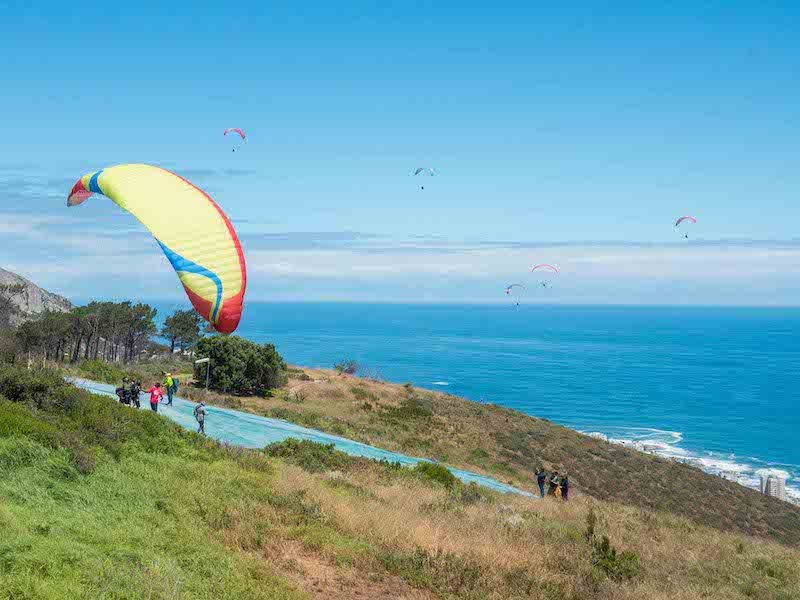 My only task for the flight was to hold the GoPro. Soon enough, my pilot, Ruard lifted the parachute and the wind lifted us off the ground instantly without even having to do a run to take off. 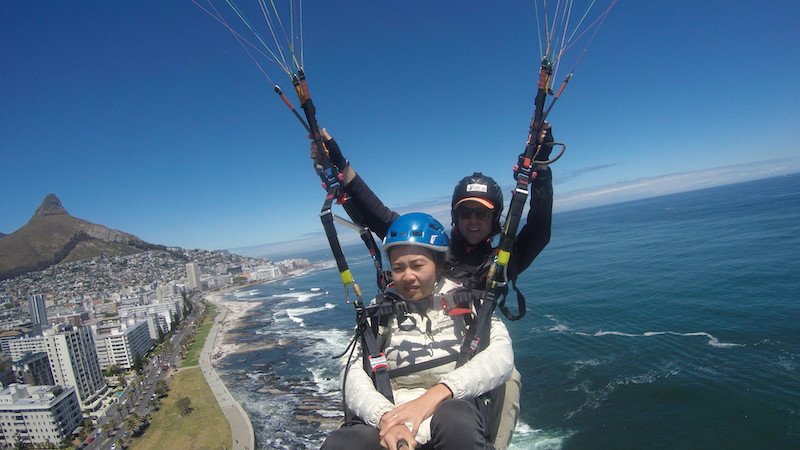 Throughout the whole flight, apart from Ruard, the GoPro was working the hardest. All I had to do was take in everything from up above. 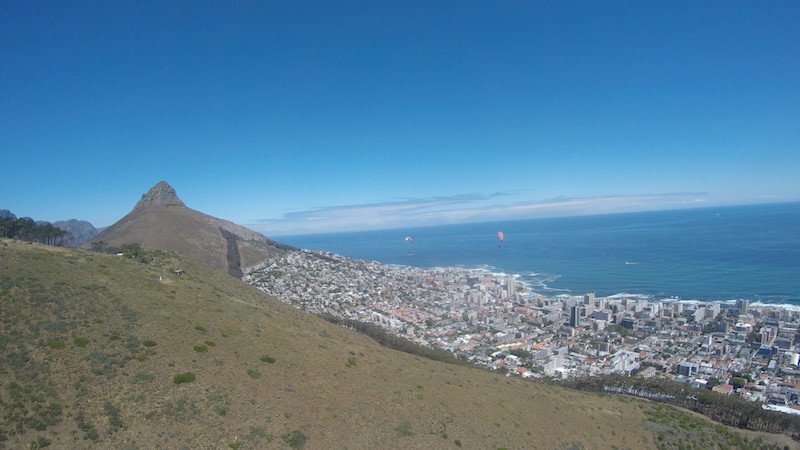 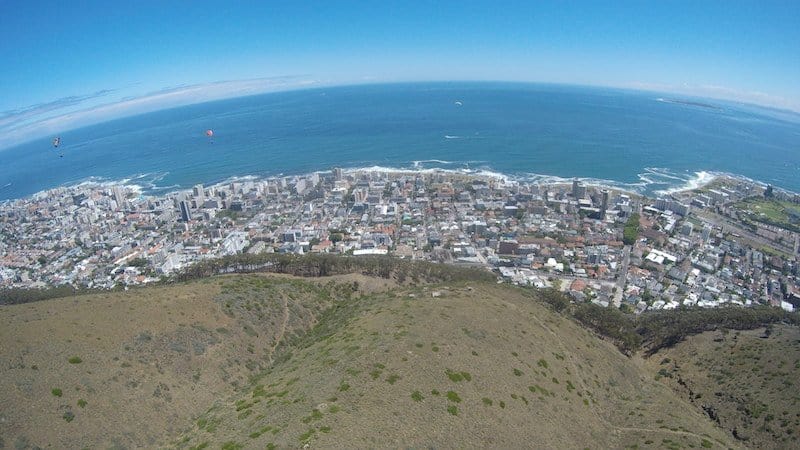 View of Camps Bay, Clifton and beyond

There was so much to take in from above flying off Signal Hill that the flight honestly felt too short, though I was told it took 10 minutes long! 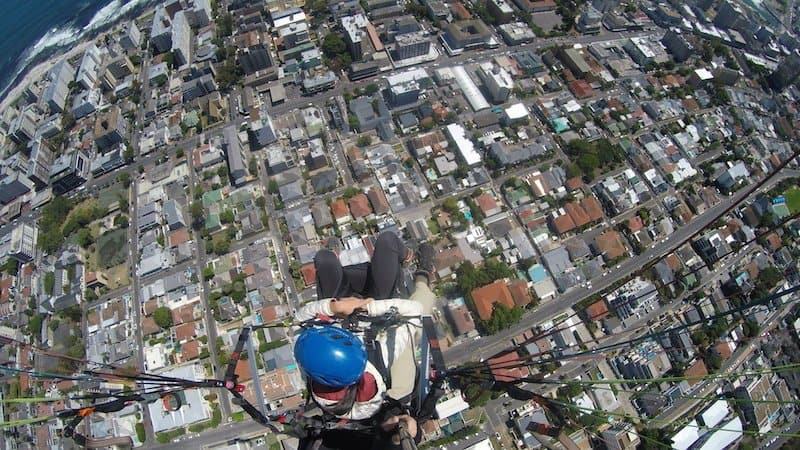 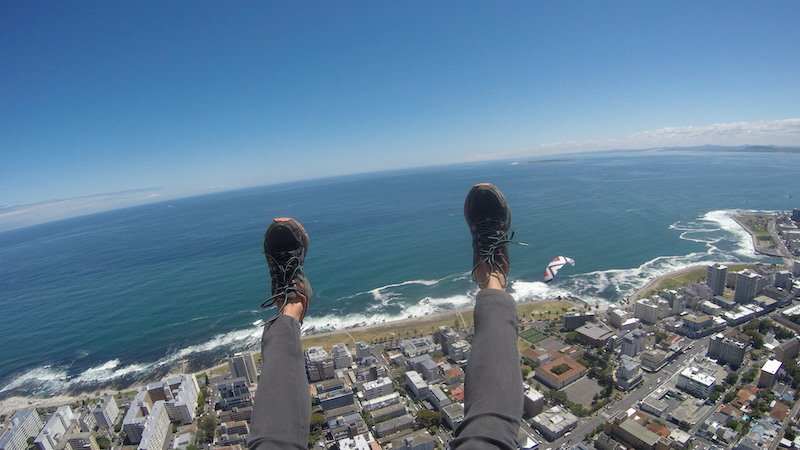 The view of the ocean, the mountains, Camps Bay, Clifton, Sea Point and the surrounding towns were all within my vantage point. All the houses seem like little building blocks from up above. I felt like I’d been taken on a ride on a drone.

It was further into my research about paragliding in Cape Town that I realise not every paragliding experience allows for hovering over the ocean. 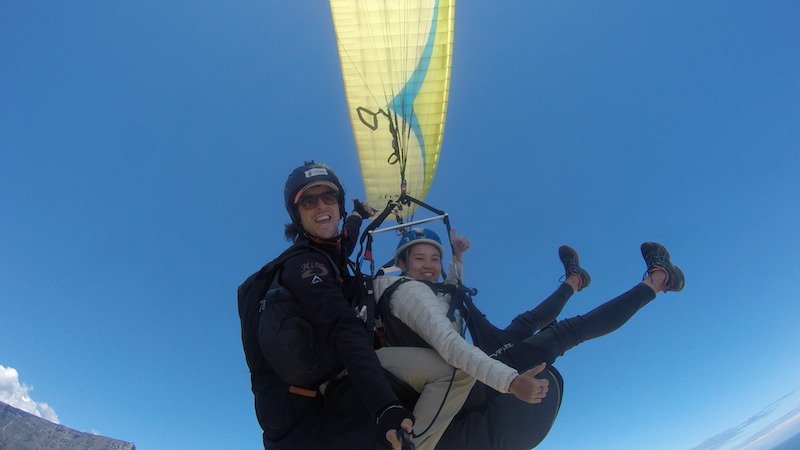 Therefore, the highlight of my flight was how Ruard did some stunts as we reached a lower altitude, when we were right above the water. I count myself pretty lucky as we did some wingovers and a spiral dive just seconds before we landed, which made feel like I’m free falling. It’s as if I was speeding down on a rollercoaster. I live for such adrenaline!

Catch the paragliding stunts towards the end of the video:

We landed relatively smoothly on a grass patch, and there was already a team on ground to help with packing up the parachute. Before long, I was already in a taxi they had called and Ruard was transferring all the pictures and videos taken on the GoPro to my phone in the car.

This company I flew with was professional, yet it felt a tad mechanical and impersonal, as if I was just one of his many clients for that day and he had to rush to finish the job with me to take on the next one.

Unlike the paragliding I did in Sedgefield on the Garden Route, everything seemed to happen very quickly that I didn’t feel I was able to converse much with him at all. 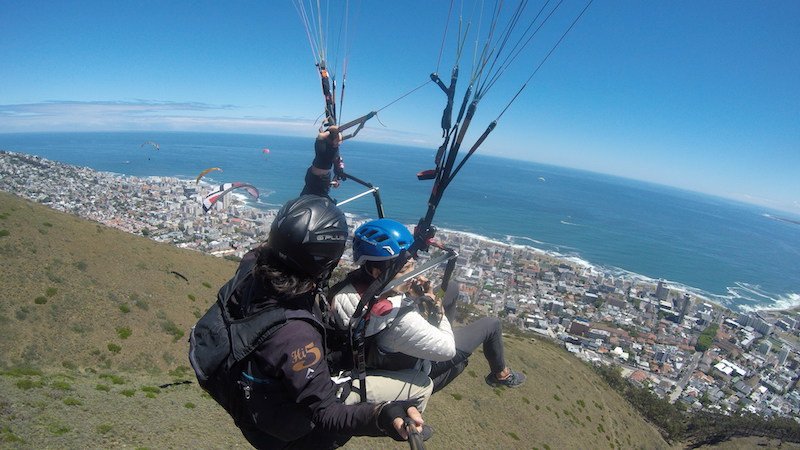 Even then, the views of Cape Town was so mesmerising that it’s hard to be distracted by anything else.

The cost of the tandem paragliding flight is R1300/ USD88, while optional photos and videos are R300/ USD20. You are advised to pay in cash in case of any refunds due to last minute weather changes.

What to bring to paraglide in Cape Town, South Africa

Regardless of which route you fly on, the experience in the air with unparalleled views is the reason why I enjoy being the air so much.

It’s as if the whole world fades away and you’re in an alternate dimension where it’s just you, the vast space around you and the wind drumming in your ears.

Travel Vaccines You Should Absolutely Know About

Nothing Can Beat These Top Things To Do In Cape Town, South Africa

Most Romantic Honeymoon Destinations in South Africa I’ve Ever Been

Exotic Wedding Destinations Around the World

Special thanks to Adrenaline Hunter for this experience! All opinions remain my own.