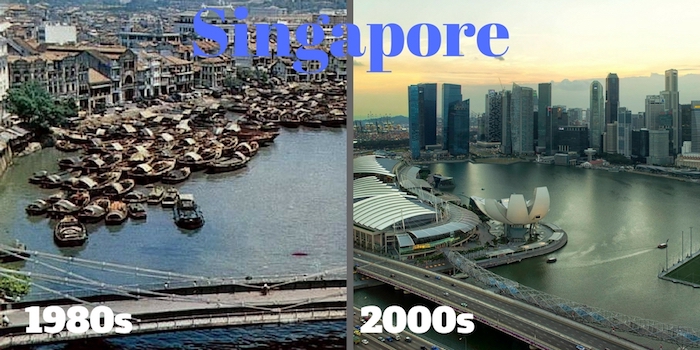 7 Amazing Transformations That Have Changed The Face Of Singapore

Home » 7 Amazing Transformations That Have Changed The Face Of Singapore

Ever wondered what Singapore was like in the past, and how much it has evolved over the decades?

Singapore has undergone an amazing transformation since its independence in the year 1965. In such a short period, Singapore has grown into a world-class city boasting of a state-of-the-art public transportation system, enchanting tourist destinations, economic hub for trade and commerce, and much more. Termed as one of the economic miracles in the 21st century, Singapore has always made a quest to be the best in whatever it does.

A Singapore city tour is enough to testify this amazing transformation. You will be stunned at the transformation the city has undergone in the last decade itself. This beautiful city-state’s phenomenal rise into an economic and regional hub for highly specialized services has had its own share of setbacks, but the rise from the ashes of Singapore is also a truly inspiring story.

Here are 7 amazing transformations which have changed the face of Singapore in the last decade or so.

Singapore River of the past

A look at the pristine Singapore River today gives you no indication of its tragic state back in the 1970s. Indeed, it is one of the most attractive tourist destinations in Singapore today. People love taking a stroll along the riverbank and enjoy the beautiful sights, vibrant sounds, and smells of Singapore’s diverse culinary treats at the nearby Boat Quay and Clarke Quay.

With an impeccable ambiance and dazzling skyline in the backdrop, you can’t ask for a better environment. A Singapore River Cruise is one of the most enchanting rides along this beautiful River where you get a sneak peek into the rich history and cultural heritage of this amazing city.

A visit to the Asian Civilizations Museum, which houses close to 1,300 artifacts would also give you insights about the the history of Singapore and how it has evolved.

Sentosa, present and past

One of the must-see attractions when you visit Singapore. In the past, it was termed as Pulau Blakang Mati, meaning “dead back”. Sentosa Island was primarily used as a training space for the Gurkha infantry units. It was then back in 1975 when Sentosa was restored and built as a pure leisure space for the locals and tourists.

Today, the future generations of Singapore will remember Sentosa only for world-class attractions such as Resorts World, Tiger Sky Tower, and the Universal Studios.

Accessible easily today by MRT, road, cable car, train or even the 770-yard boardwalk, Sentosa boasts of some incredible tourist attractions which offer only two things; fun and entertainment. There is a replica of the iconic Merlion statue in Sentosa Island. No matter which age group you fall in, the Sentosa has plenty of entertainment opportunities for all tastes.

3. The Green City of Singapore

Singapore was taking shape at the advent of the 21st century with amazing developments all over the city. There were many surprises which were thrown which have completely changed the outlook of Singapore in the world today.

The year 2008 saw the grand opening of the Singapore Flyer, the largest observatory wheel in the world.

A look at the dazzling Marina Bay today is in itself a testimony of the stunning transformation Singapore has undergone in the last decade or so.

A stroll through the Gardens by the Bay is a testimony of the Singapore turning into a green city. Two world-class conservatories houses plants from different parts of the world and in conditions that are as diverse as tropical highlands and almost 2,000 meters high.

Singapore was making rapid strides in development and trade in the 1990s and early 2000s. One of the major developments which took place was the restoration of the most vibrant and colourful district of Singapore, Bugis.

There are several temples and mosques such as Malay Heritage Center on Sultan Gate and Kwan Im Thong Hood Cho on Waterloo Street, but the emphasis will always remain on shopping. Nestled around restored shop houses, which encourages shopping for all weathers and for all budgets.

Whether you want local or international brands, Bugis has everything housed under one roof. A stroll over to the neighboring Arab street which is booming with cafes and a budding arts & crafts scene. One of the prime destinations for the Arab traders who were settled in Singapore, this place is a hot-spot for Arab delicacies.

A look back into the days when Singapore was a budding industrial city to the point today, one thing which has changed the way people perceive new Singapore is the world-class public transport system.

The evolution of the buses and the MRT system in the 1980s has inter-connected all parts of Singapore. Commuting from one corner to the other corner of Singapore is not a hassle today.

Great City World, present and past

People in their 40s can probably recall the old amusement park called Great World. But today, if the same thing is told to today’s generation about the Great World, then would term it as a hoax.

The Great World boasts today of a world-class shopping center along the River Valley. The incredible variety of brands are on display and you can probably shop till you drop. It’s literally heaven for the shopping addicts.

A look at the Great World City today is a testimony of the amazing transformation in new Singapore since the 1990s.

Chinatown, past and present

Singapore boasts of a major Chinese and Indian community and this is evident when you stroll in Chinatown and Little India respectively. Back in the 1980s, these ethnic quarters were stuffed with street hawkers and traditional tea houses selling their goods along with hipster cafes and chic restaurants. A major restoration was done in the 1990s where most of the traditional architecture has been well-preserved.

Today, Chinatown boasts of an incredibly delicious culinary treat center. The Chinatown Complex and the Maxwell Road Food Center along the South Road Bridge are the main drivers behind this incredible food scene.

Little India and Chinatown are also known for their amazing souvenir collection which offers incredible variety to gift your loved ones and friends back home.

Singapore has undergone some surprising transformations throughout the decades. Who would have known that a small city known for being a trading hub is now regarded as one of the best tourist attractions in the world?

Vast development in recent years has also transformed Singapore to be known as one of the greenest city in the world. Other modern advancements like change in transport service, amusement parks and markets for street shopping has given Singapore everything that city could ask for.