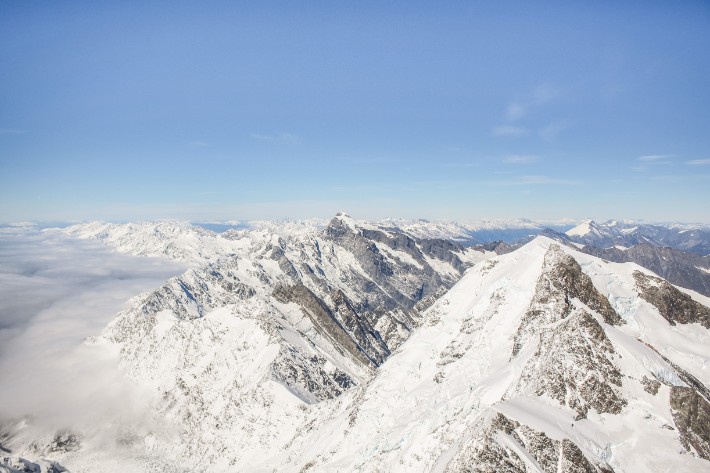 I’ve had the honour of flying with Air New Zealand on my last trip to New Zealand from November 2017 to May 2018. Yes, I was on an unplanned Working Holiday in New Zealand, hence the 6 months spent there!

On my flight from Singapore to Auckland, I was seated in the Premium Economy class, which had a limited seating of 17 spaces in all. I enjoyed the space, cosiness and exclusivity.

Each seat was provided with a pillow, blanket, bottled water, ear phones and socks.

Power plugs were also available at the bottom of every seat, or if you prefer, you can use the USB plugs situated at the side of the touch screen.

I liked how the safety video was filmed very interestingly. Instead of the standard, formal safety video that you’d see on every. Single. airplane you sat, Air New Zealand made the effort to engage passengers via a very entertaining video which incorporates not just the inflight safety aspects, but also with a special theme.

Starring the representatives of New Zealand – often TV hosts, actors or environmentalists from New Zealand, they very cleverly injected humour, history and environmental awareness into the safety video, making me not tire of watching it over and over again. This time, it was about the New Zealand team working in Antarctica.

It surely left me intrigued about Antarctica that I unknowingly opened an Antarctica documentary to watch during my journey.

The movie selection aboard Air New Zealand is also always so updated that I could watch the latest movie releases ahead of everyone else!

Whilst the air-conditioning was not adjustable, I didn’t feel a bit of dry air that you would normally feel aboard most other airplanes.

Air New Zealand’s meals are some of the most appetising ones. Add to the fact that they have a Fine Wines List which is compiled annually by six of New Zealand’s top independent wine experts. There’s no better way to welcome New Zealand than a glass of house wine, is there? 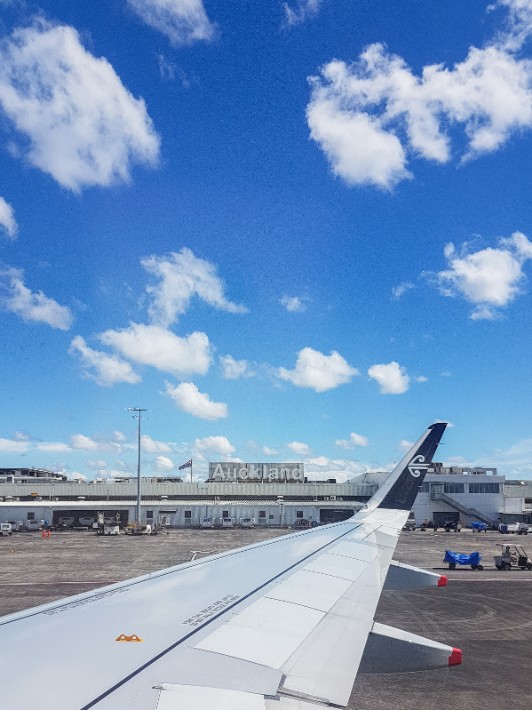 Being seated in the middle aisle, I could hardly feel the take off. The entire flight was very smooth and before long, I’d arrived in Auckland, a short stopover en route to our eventual destination in Queenstown.

Checking In At Auckland Airport 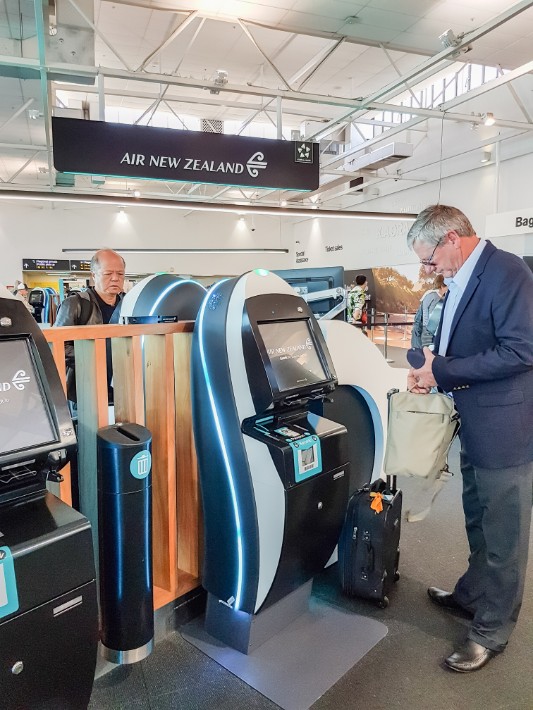 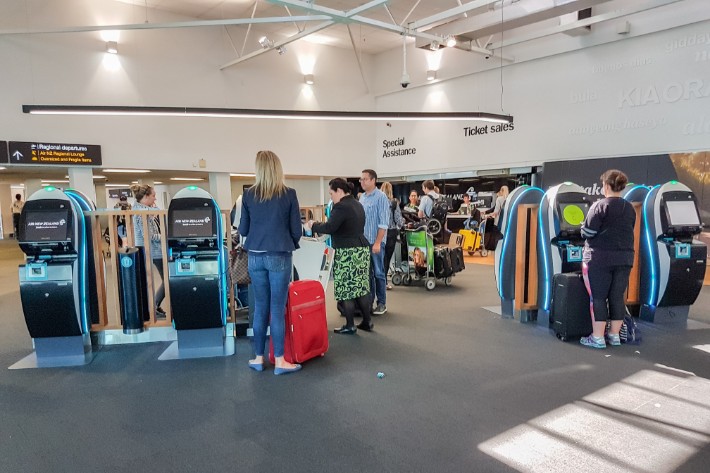 At Auckland airport, the Air New Zealand counters were easily identifiable – traditional desk counters are replaced with self-check in kiosks where you only have to scan your passport or boarding pass to get your boarding ticket and luggage tag. There is a conveyor at the side for you to drop your luggage that are for check in. 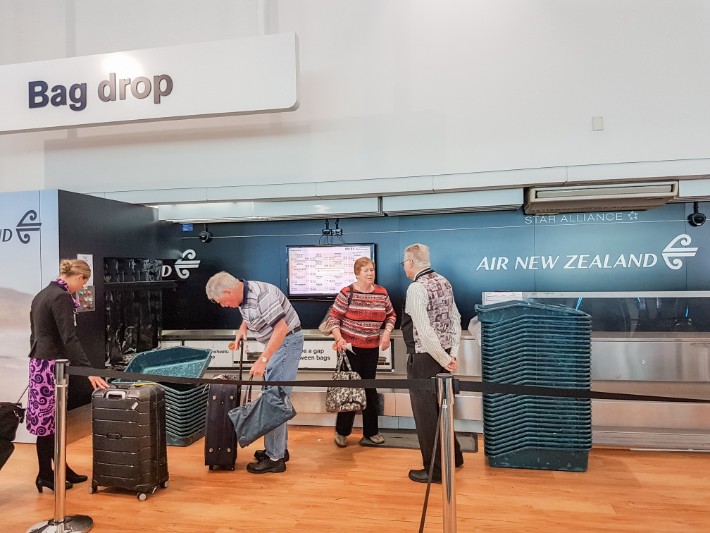 This reduced the need for any queue since everything was done at your own time and efficiently.

Arriving in Queenstown to the familiar smells of freshly brewed coffee and the electric energy in the air, it felt as if I was experiencing deja vu, as everything from my graduation trip in May 2016 came flooding back.

We drove past Fergburger and I couldn’t resist sticking my nose out to smell the whiff of freshly baked pastries from the Ferg Bakery beside it.

My thoughts were interrupted as we drove past The London diner. “Hey! That’s where we had pizzas on our last rare night out last May!” A flood of memories came flooding back as my thoughts drifted to our unforgettable graduation trip.

The colour of summer is infinitely better than the first time we were here in May 2016. As unwelcome as the Gorse weeds are, I like that it brightens the otherwise uniform green landscapes of Queenstown’s outskirts.

I also loved November’s air as the temperature is just right for the sun that is shining down on my skin. While it can go as low as 4ºC in the morning before the sun rose (when I woke to do The Air New Zealand Queenstown International Marathon), the afternoon’s sun is perfect for having lunch takeaways to have it by the grass patch along Lake Wakatipu. 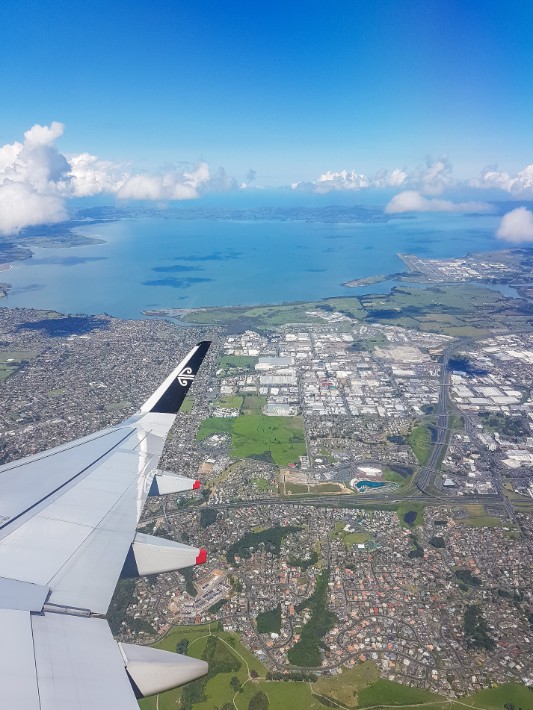 Fast forward to May 2018, after my last day of work at Fox Glacier Guiding, a good 4 months of working later), I was slowly making my way back to the North, back on the familiar roads. A couple of Intercity bus rides, Bluebridge ferry crossing from Picton to Wellington, and a Northern Explorer scenic train ride from Wellington to Auckland later, I was finally back where I’d started.

Along the way, I’d experienced a panic attack when I found out that I’d left my bag with all my electrical supplies and my backup hard disk of my ENTIRE New Zealand photos in Omarama (where I experienced gliding for the first time!) only when I’d arrived in Wellington. That’s an island and ferry crossing away, and I was bound for Singapore in less than 3 days! :O

Bless New Zealand Post for reliably sending over my items from the South Island to the North in 1 day!

In Auckland, I had very kind hosts that I stayed with, and I was really pleased that we managed to meet up them again after 5 months of me being on the road and away from Auckland.

Even though I didn’t like Auckland very much, I felt at home knowing I have friends who had very kindly extended their kindness to pick me/ drop me off at the airport, assist me in settling the administrative work so that I could legally work in New Zealand, go on runs/ to the gym with, and also for providing me with a roof above my head.

Checking In At Auckland Airport (Again)

As reluctant as I was to leave New Zealand, Air New Zealand provided a really seamless check in process and made my last moments in New Zealand that much more comfortable. 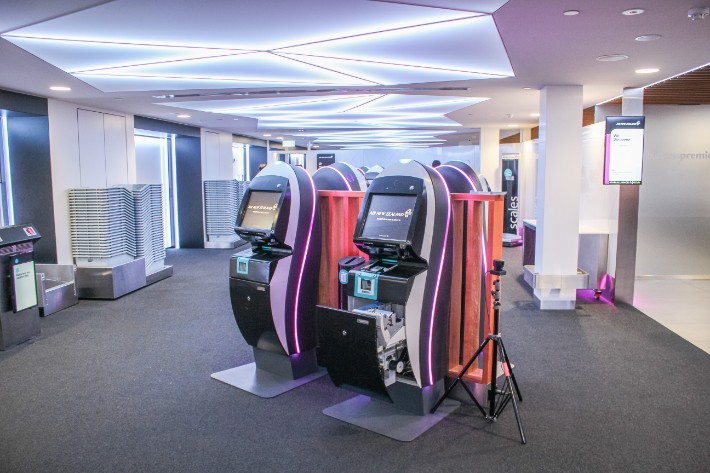 The Business Premier check in lounge in Auckland was in a more private space, enclosed from the rest of the hubbub of airport passengers, as compared to when I first checked in when I’d arrived in Auckland. 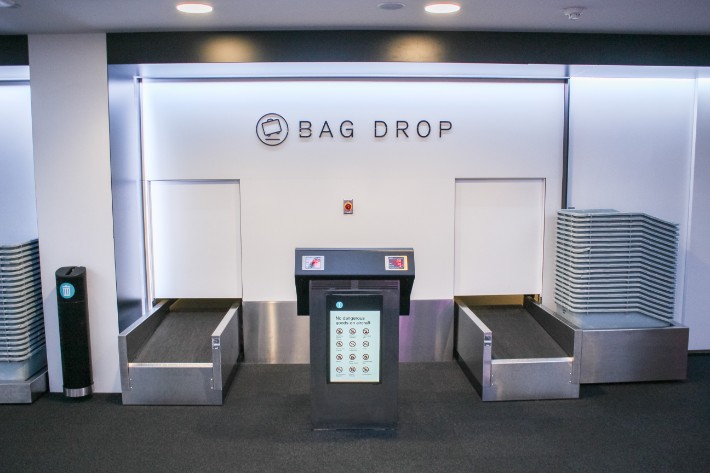 The Air New Zealand staff are also more readily available to offer help since there are fewer people checking into Business Premier. Apart from the self-service check in, you can also opt for a concierge to do the check in for you. 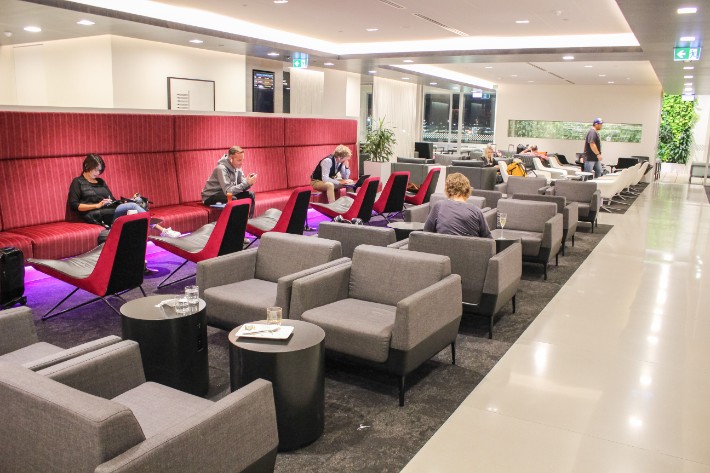 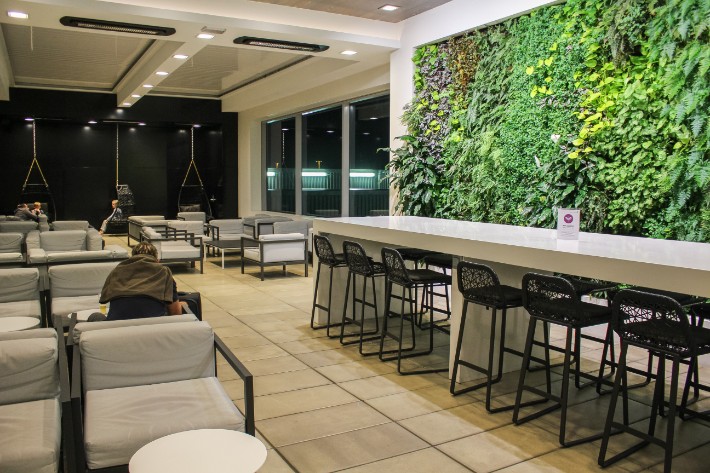 While waiting to board my flight, I was taken to the International Lounge to relax and refuel. The lounge was much larger than I expected, with both outdoor and indoor seating available – enough for 375 guests! 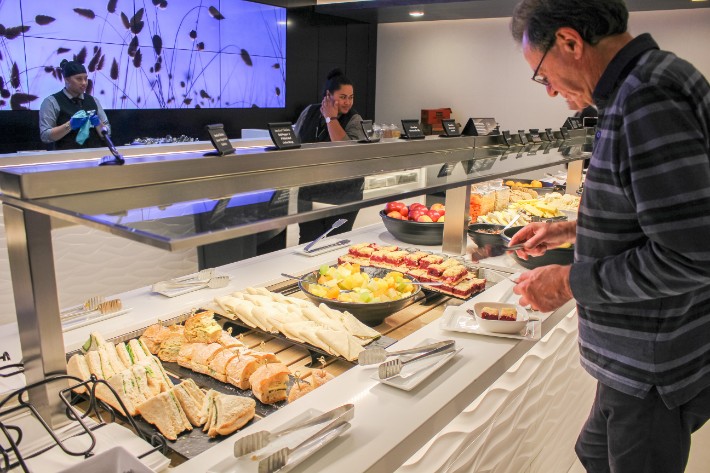 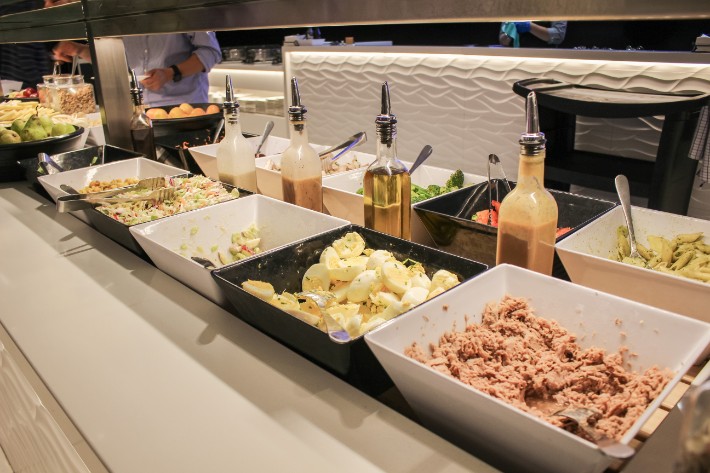 Seeing that it was almost midnight, as appetising as the finger food and salads may look, I gave it a miss. The selection is wide though, with sandwiches, salad, cheese and crackers.

I settled for some bubbling champagne and a couple of cheese, crackers and fruits. 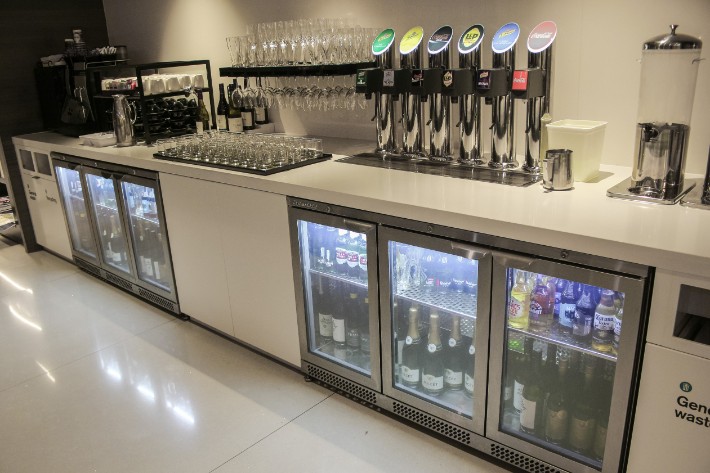 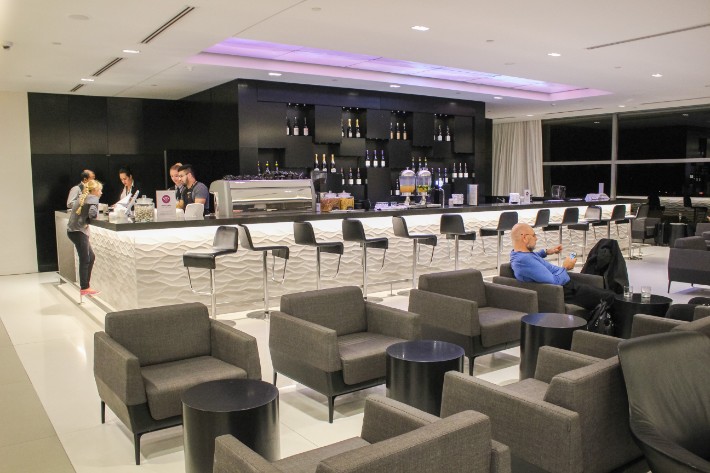 Yes, you can order free flow alcohol at the bar, if the refrigerator’s supplies or the draught beers are not enough. Even barista-made fresh coffee is readily available.

There is also free WiFi throughout the lounge.

Business Premier seating has 18 seats in total, with ample private space for each passenger. 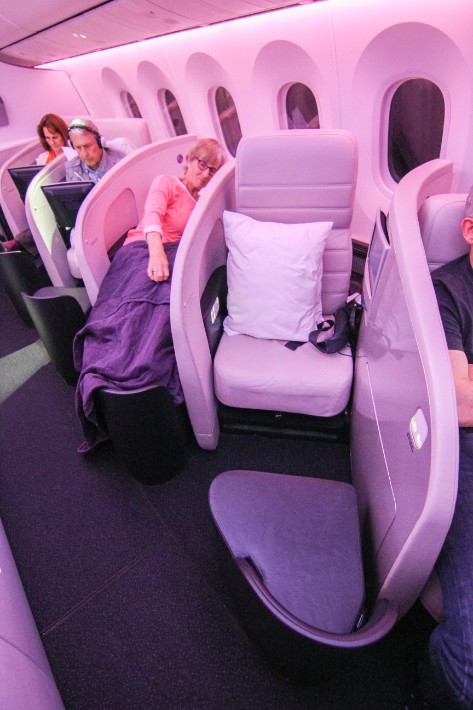 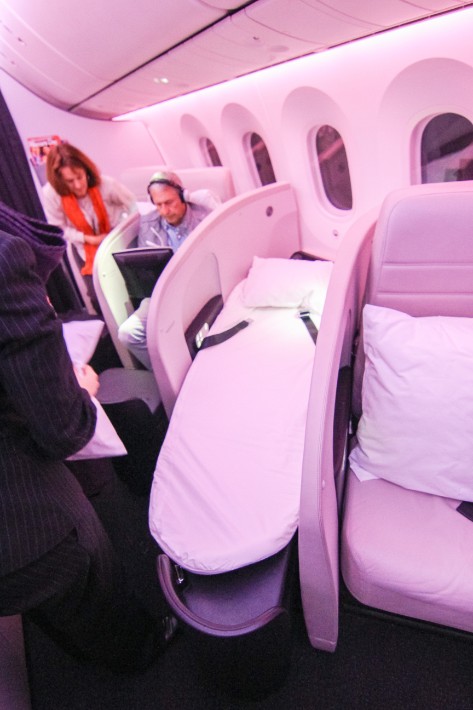 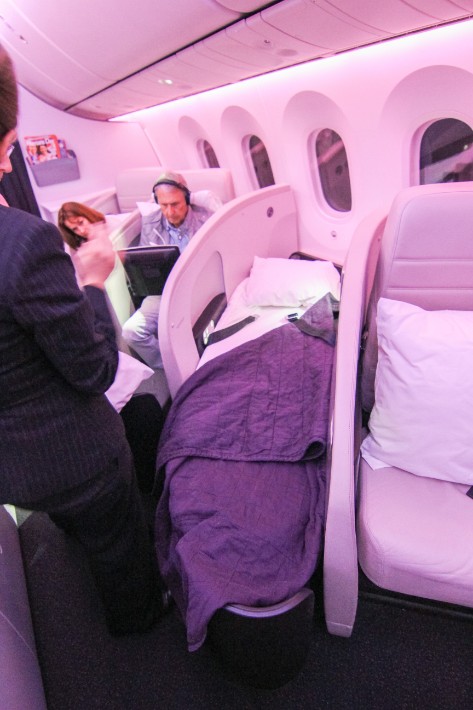 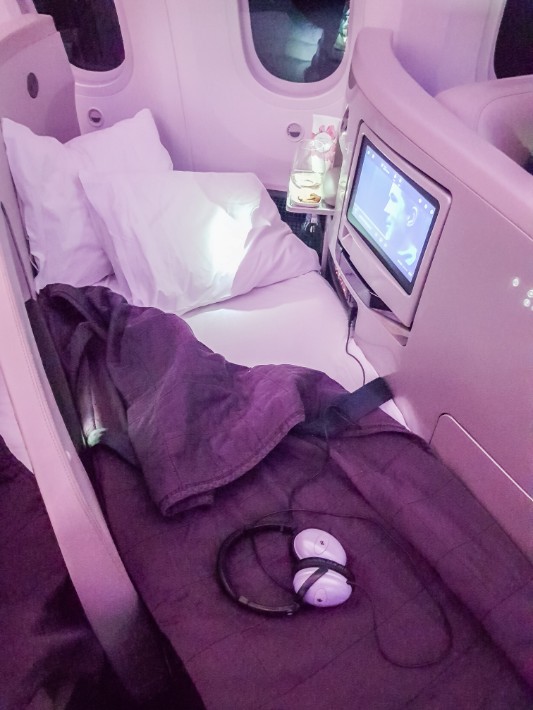 The feature I liked best and was most impressed about with the Business Premier seats on board the flight was how easily you can recline your seat to a comfortable bed, with bedding and blanket provided so you won’t even feel like you’re on a plane when you’re sleeping!

With reclining your seat, there is also an option to recline such that you get lumbar support, though I can’t vouch for its effectiveness as I hardly felt the support.

There is a coat cupboard on both sides of the aisles for if you need to hang your business coats up.

I knew it from the moment they introduced themselves to us that the air stewardesses were attentive and ever ready to help.

You needn’t have to lift your finger if you wanted your seat made into a bed. The air stewardesses would spare you the frustration of having to figure out what button gets the job done.

On to the topic of food, and also what I look forward to the most on every Air New Zealand flight.

Apart from the pre-meal drinks of your choice available, the food options for every meal were equally enticing I had to get the stewardesses to come back again while I made up my mind.

Never mind the delicious food. What blew my mind was the breakfast smoothie they served when I woke. It was a boysenberry banana smoothie made with such perfection I had to order a second glass.

I remember my first feeling upon waking up 10 hours later – wistfulness. It felt like the 6 months of New Zealand is about to cease to a dream… and I would do anything to go back again.

The draw about Business Premier seats is ultimately the space and comfort for each passenger. They very cleverly maximize storage with storable table and lamps that it was amusing trying to explore every nook and cranny within the confines of my seat. 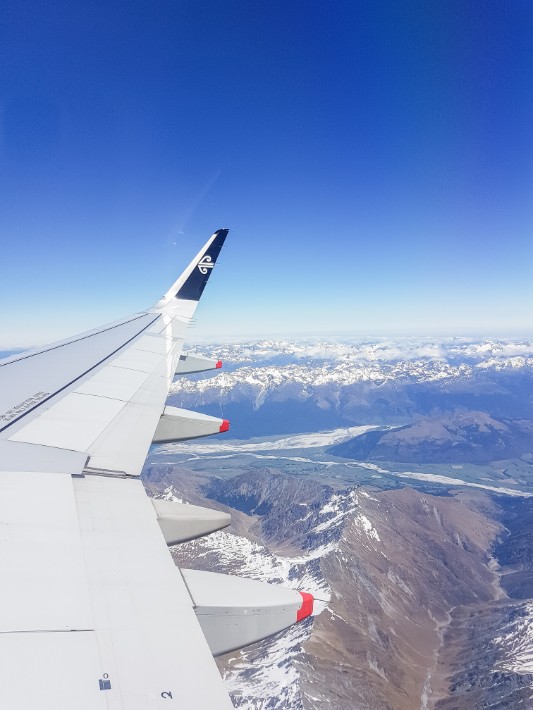 If you are a light sleeper and require the comforts of a bed to be able to have a good sleep, the Business Premier option is right for you. Otherwise, the Premium Economy class offers good enough service to make you feel important.

Whatever type of seating you choose, and don’t ever leave the flight without having a taste of their boysenberry banana smoothie!

Special thanks to Air New Zealand for this experience! All opinions remain my own.

Other useful posts on New Zealand: