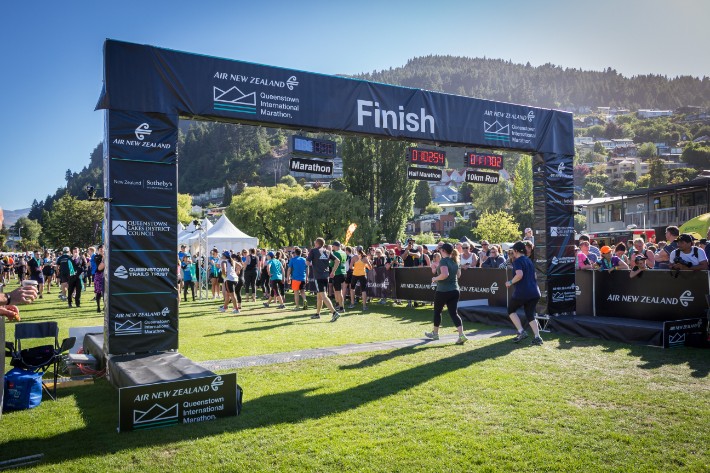 This is a familiar conversation starter as I journey around New Zealand exploring the South last November. Held on Saturday, 18 November 2017, that weekend saw a flurry of activities in what would have been a quiet November for Queenstown.

According to Bruce Parton’s, COO of Air New Zealand, 2017 was the fourth year Air New Zealand has sponsored the marathon in Queenstown. Air New Zealand is committed to supercharging New Zealand’s success socially, environmentally and economically. By sponsoring events in regional New Zealand, local business owners and tourism operators are able to benefit from the increase number of visitors to their regions.

The Air New Zealand Queenstown International Marathon is one of the flagship events of Queenstown. This marathon, comprising 42km, 21km, 10km and 2.2km kids race categories, is set between the backdrop of the spectacular Crown and Remarkable mountain ranges, with race routes that overlook the Queenstown Lakes region including Millbrook resort, Arrowtown, Lakes Hayes, Shotover River, Lake Wakatipu, and Queenstown Gardens.

Queenstown from the top

With Queenstown’s reputation as a world-class holiday destination, combined with off-road, easy running, trails that make up the bulk of the race routes, the Air New Zealand Queenstown International Marathon is hugely attractive to overseas runners who are looking to clock some miles while exploring the town. This is indeed the case, with a record of 5 nights’ average stay in Queenstown for international visitors and 3 nights’ average stay for domestic visitors.

The strong interest in the Air New Zealand Queenstown International Marathon is also reflected in the numbers. With over 40 countries represented in this marathon, including more than 1200 from Australia, as well as runners from the US, UK and China, you can imagine how much diversity this marathon has. Out of the 10,000-odd participants this year, the overseas participants make up 20% of them. Because of this event alone, Air New Zealand has brought in almost 3000 extra seats that service Queenstown.

In it were some energy bars and my race tag. I was pleasantly surprised to find that my race tag had my country flag on it – that is how much they embrace the international scene and diversity! It was nice having a familiar identity on a foreign land.

Merchandise like shoes, tees and sporting accessories were also available on sale on site at the Sports Expo.

Special mention must be made about the Queenstown Marathon app that they had created. Not only can you check all the latest information about the race, it also includes an interactive map, and sends out push notifications about collecting your race packs and your event schedule.

The best part about it? It lets you be up-to-date about the progress of every single participant you choose! Friends and family, whether present or supporting from your home country, can follow real-time updates of your mileage and pace. Push notifications are sent for every milestone the participants cross. The app is so comprehensive that it even details instructions about aid stations and bag drop.

While Singapore races recruit a single or group of runners to act as pacers, running with a balloon or some indicator to show that they are pacers, Air New Zealand Queenstown International Marathon offers you your very own personalised pacer tags. You simply input your goal time or goal pace, and your personal pace and timing are electronically calculated and printed out. You can then wear the pacer tag on your wrist and refer to it as you run. This, I thought, was an innovative move and extremely helpful for someone like me who has a set end goal time in mind.

While starting at 7:45am is late by Singapore’s standards, on hindsight, I wouldn’t want it any earlier. With the sun still shrouded at 7am, breaths of warm smoke came out of my mouth in the 7-degree icy morning air, as I moved my stiff muscles in an attempt to wake my body up. Credits to the organisers for putting on a warm up session for all the runners to warm up. The fact that some racers were in tank tops and shorts eluded me.

As we were ushered to the start point of my 10km race, the sun rays started streaming in. Finally! There’s nothing like the warmth of the sun’s rays on one’s skin. There were markers to indicate 40-50min runners, 50-60min runners and so on so as to reduce human congestion. As we hit 7:35am, the buzzer sounded and off we went!

The running terrain is a mixture of concrete road and gravel. Rather than road blocks like you would see in Singapore races, New Zealand has amassed enough hiking and park trails for them to be included in the race, so you are pretty much running amidst nature. The 10km route saw me running beside the picturesque Wakatipu Lake, passing by private homes and through Queenstown Gardens.

The community is a supportive one, to say the least. Families, large and small, 4-legged or 2, stand on the borders all across the running route to show their support. Some hold boards, others with clappers. A particular puppy simply barked enthusiastically away. Even the weather, with the cloudless, sunny sky, held up for all 10,000 of us.

Crossing the finish line was akin to descending down a flight landing strip, an apt reference to Air New Zealand’s involvement in the marathon. You would think the finishing line is a benchmark to mark your race accomplishment as a member of the Air New Zealand cabin crew presents the medal over your head, but as I stood in the Air New Zealand VIP tent, I bear witness to more than just the mere completion of a race.

Third generation toddlers holding tight to the hands of granny, dashing to finish the last 200 metres with her.

Other couples with their fingers interlocked with each other, with a single aim in mind – to complete every hurdle, hand in hand together.

There was even a dinosaur who took part in the marathon!

There were also participants lugging a 3kg luggage crossing the finish line of whom I admire. They were participants of the Air New Zealand competition, where they stand to win tickets on board Air New Zealand. Running a marathon 3kg heavier? Thanks, but no thanks!

What touched me the most was seeing the familiar face of the Queenstown crowd – the 93-year-old Colin Thorne – cross the finish line of his half marathon. There’s something about marathons that keeps him coming back, he says. That’s one hell of a role model to emulate.

Full marathoners are another sight on its own. Seeing them push through with grit and determination, clenching their fists in their sweat-drenched tees, the spectators erupt in a standing ovation.

While you’re in New Zealand, Parton recommends travellers to complete one of the nine Great Walks of New Zealand. The Great Walks are located all around New Zealand showcasing our diverse landscape, native forests, mountain peaks, deep gorges and vast valleys.

With more than 9,800 people taking part, it certainly exceeded their goals of getting more people outdoors and doing active sports, and bringing more people to Queenstown and have them discover its scenic landscapes.

“New Zealanders are extremely welcoming and down to earth and are very passionate about our history and culture. Our cities and regions have their own unique offerings, meaning there is always a new adventure to be had or place to explore,” says Parton.

Indeed, I have experienced the real hospitality of the Kiwis during my visit to New Zealand throughout the various cities and towns I’ve visited, and I’m not sure I’ll get tired of the mountains and lakes.

Special thanks to Tourism New Zealand and Air New Zealand for making this trip possible! All opinions remain my own.

Want more stories of New Zealand? Find them in your inbox!