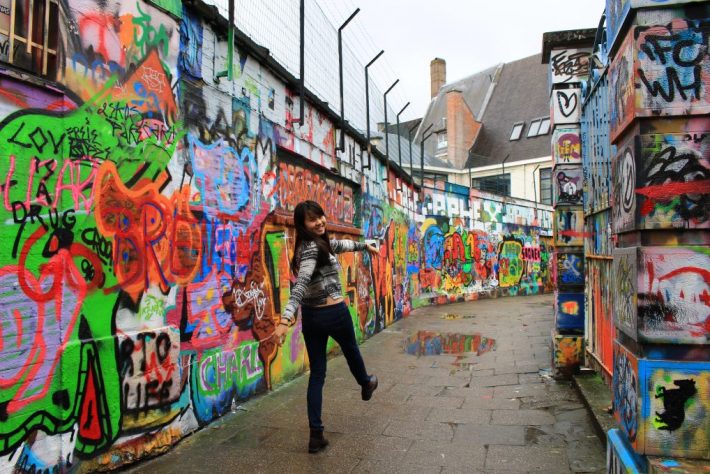 Best Things to Do in Ghent, Belgium + Complete Ghent Guide

When we think of places to visit in Belgium, we always think of Brussels. However, just an hour away is the cyclist-friendly, clean, unpolluted, medieval city of Ghent. The best thing about it? It is not overly touristy i.e. crowded. There is a certain peacefulness and authenticity that emits from this city.

Getting from Brussels to Ghent, Belgium

Getting from Brussels to Ghent is straightforward. Just purchase your ticket from Belgian Rail online or purchase it at the station.

If you are under 26, the train from Brussels to Ghent are discounted at 6.60€ one way, while for everyone else, it is 9€ each way. You would notice that there are two train stations in Ghent – Gent-Sint-Pieters (30 minutes from Brussels) and Gent-Dampoort (1 hour from Brussels).

I would suggest stopping at Gent Sint Peters and taking the tram into the city center.

Getting around Ghent, Belgium

Getting around Ghent city is easy. Choose to walk or take the tram. Ghent is a very walkable city and I would encourage you to do a walking tour to really take in all the nooks and crannies of this city.

If you are planning to hit up a couple of the attractions, it might be worth to buy the CityCard Ghent which includes all rides on the trams and buses too. You can check the details of that out here. 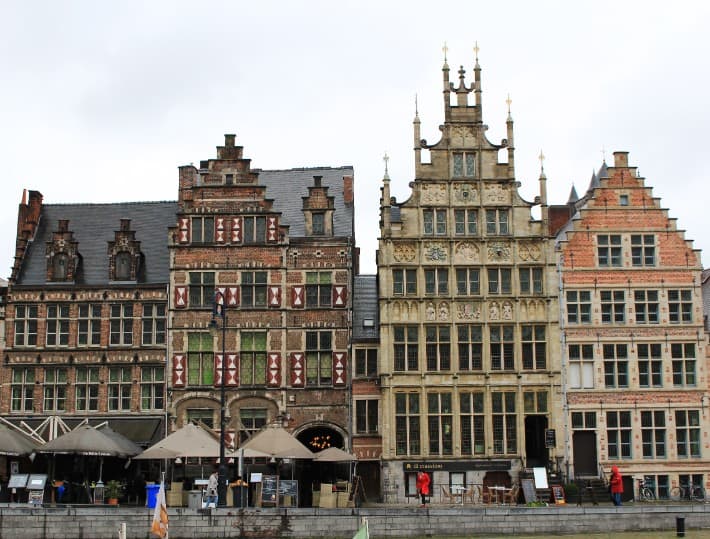 Just a short introduction on Ghent city. The Flemish name ‘Gent’ derives from the Celtic word ‘Ganda’, meaning ‘confluence’ as the city of Ghent first started at a confluence between the two rivers, Scheldt and Leie.

Ghent used to be famous for the production of cloth from English wool, however this trade died off in the 15th century. It is now a university town and a rich cultural hub.

The first thing you would probably notice in Ghent is that the signs that spell Ghent is now ‘Gent’. Ghent is in the Flemish region in Belgium and the people speak Flemish Dutch, unlike the people in Brussels who speak French!

The best time to visit Ghent or Belgium in general is from mid-May to mid October. These are also the times where they have the most festivals around Belgium as the weather starts to warm up.

Being Singaporean, I would not say that it gets hot in Belgium at all but the warmest month is July at about 24 degrees celsius – a comfortable cool temperature indeed! 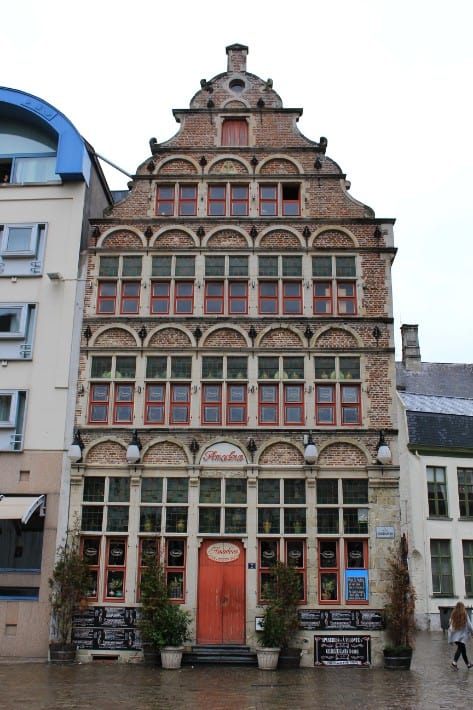 Now, on to the exciting stuff! What to do in Ghent and what are some of Ghent’s points of interest?

Best Things To Do in Ghent 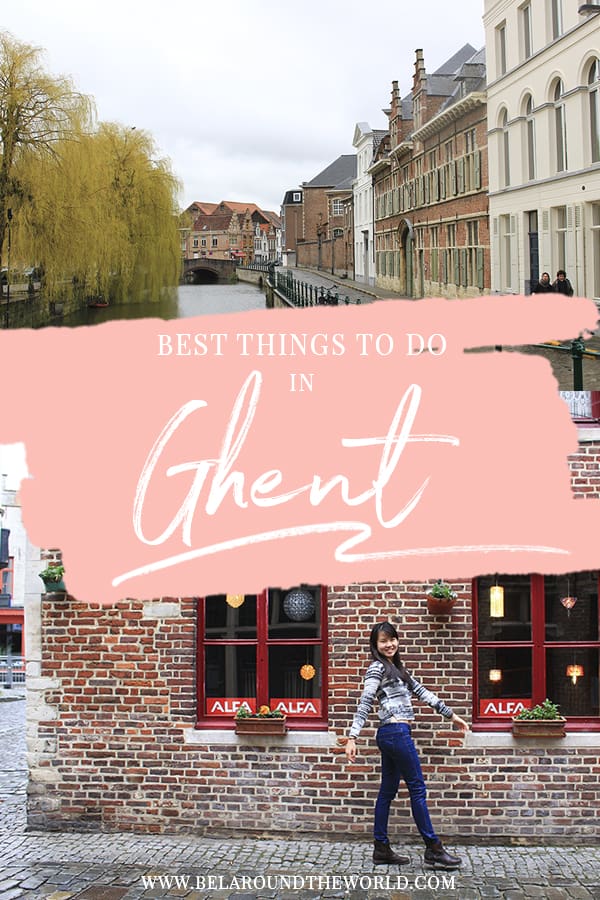 Pin this for later! 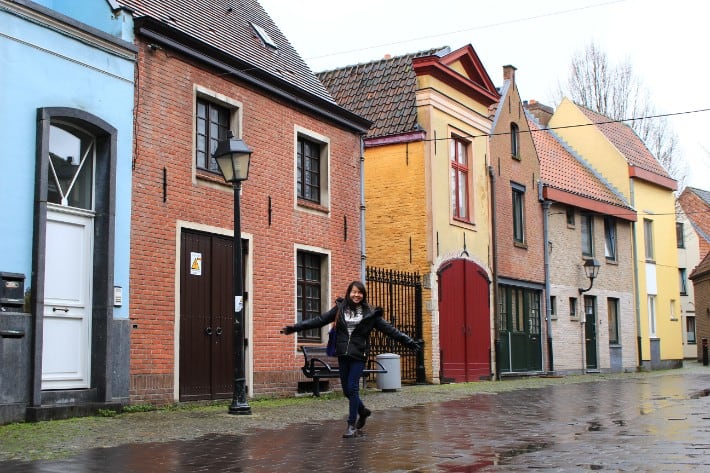 Meander through this neighbourhood and fall in love with all the colourful houses. Every building is intrinsically decorated with coloured glass. While they are old buildings, the wear and tear does add to the old school charm.

There are many half-hidden restaurants in Ghent through the narrow cobblestone alleys so be sure to take some time to explore. This might have been the turning point where I started falling in love with Belgium.

An ancient gothic architecture cathedral, this has been a place of Christian worship for a thousand years. This was initially a Roman-designed church before it is what it is today.

Entry to the St Bavo’s Cathedral is free. However, visitors are not allowed to get up to the top of the cathedral except for during the Ghent festivities which is in late July.

Did you know, Ghent is crowned the “Creative City of Music” in honour of its many famous festivals and music schools, and its more than 600 rock and pop bands? The Ghent Festivities – a music and theatre festival is one of them. This is a 10 day event and it is free! If you are lucky to be in town for it, be prepared for a wild and colourful array of parades, performances and exhibitions.

For more information on the many other arts events happening in Ghent, refer here.

3. Climb the Belfry of Ghent 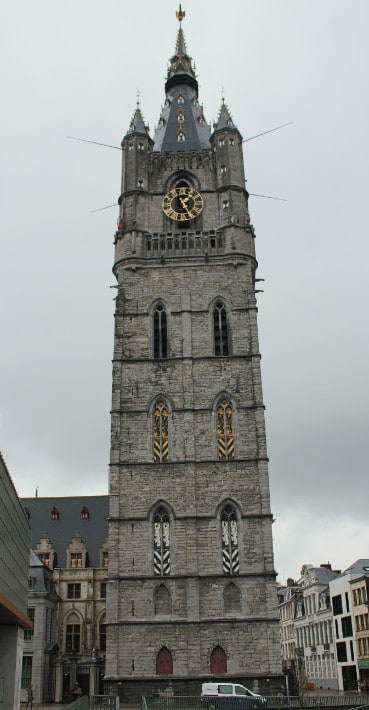 At 95m high, this tower definitely is one of the architectures that stands out in the city’s skyline.

At the top of the tower is a golden dragon, a symbol of the city. I would suggest popping by to admire it again when the sun sets – it looks even more magnificent at night!

You can choose to pay a small sum to climb to the top of the tower. If you have they Ghent Citycard, it is included!

Carved out of Belgium bluestone, this is one of the city’s iconic architecture. It has taken on the classic Gothic style and is gorgeous to look at at night!

If you are there on a Saturday, the front of the church transforms into a book market with tons of books sharing about Ghent’s history and culture.

5. Stop by St Michael’s Bridge for a photo

The bridge provides a 360-view of this beautiful Ghent city. Take some time to just stand on the bridge, look around and take in what this city has to offer. It is also from here where you can see all three Medieval Towers of Ghent – St. Nicholas’ Church, the Belfry of Ghent and St. Bavo’s Cathedral.

6. Take a chill afternoon off in Graslei 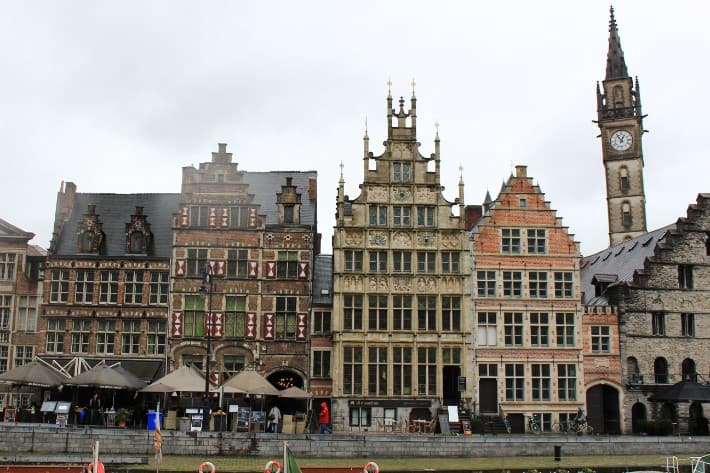 A row of traditional crow-stepped gable roof lines across the river awaits the perfect capture. These mellow brickwork structures in the city centre of Ghent really throws you back into the medieval times. 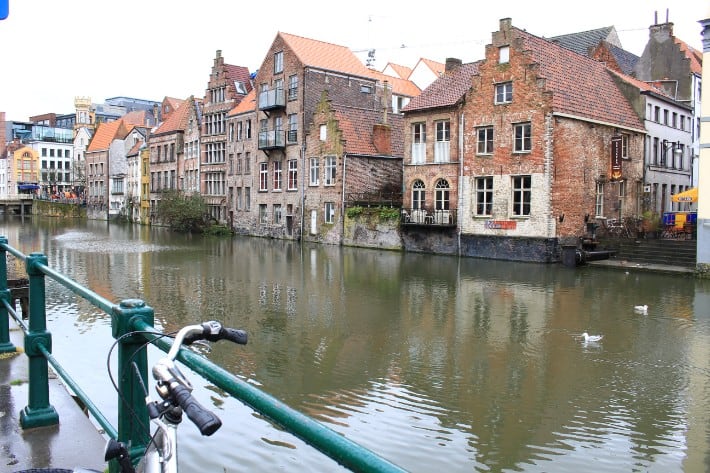 My perfect afternoon was spent here in one of the cafes people-watching along the embankment.

7. Admire the colourful graffiti in Werregarenstraat 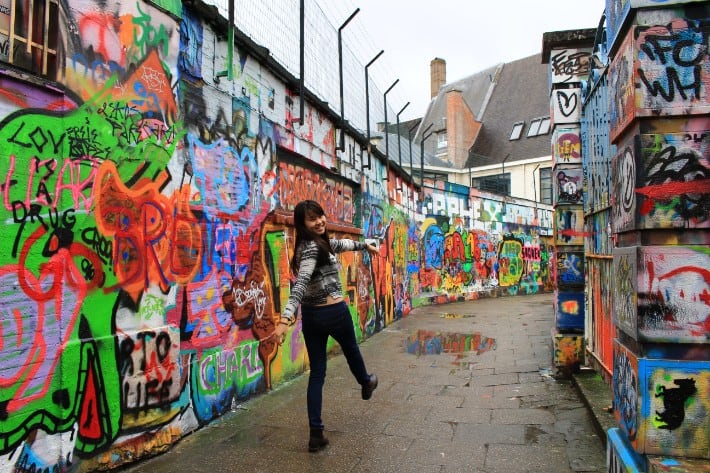 This is a secret street in Ghent and the only place where graffiti is legal. Only locals know of this hideout. If you’re in Ghent, you HAVE to visit it and be awed by the kaleidoscope of loud colours. 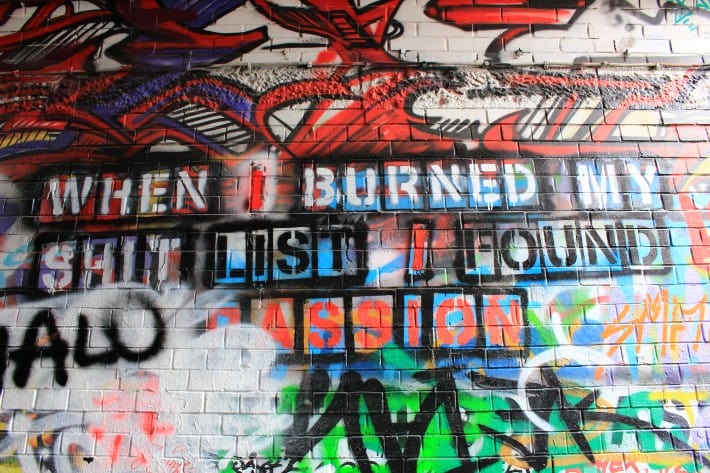 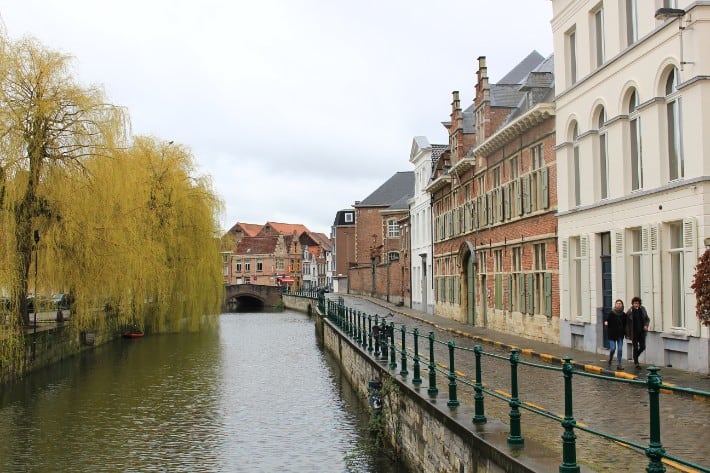 If you have some cash to spare, seeing Ghent by water is an experience worth the money. There are several companies that offer boat trips through the many rivers and canals present in the city.

You can choose to take a relaxing afternoon ride to see Sint-Martens-Latem (the artists’ village) or even opt for an evening of music and dance on board the cruise.

If you bought the Citycard, the city’s water tram does run on the weekends and is included in your package too.

The Gravensteen is also known as the Castle of Counts. In its entire existence, it has acted as a place of many purposes – a centre for the administration of justice, residence to the ruler and even a prison where many have been tortured.

Apparently, the people of Ghent do not think very much of this castle and see it as a symbol of oppression and a reminder of the abuse of power.

The Ghent city council, however, decided to restore it to its current glory and is now a tourist attraction. It includes an arms museum featuring medieval weapons and armoury.

It is 10€ to enter if you do not have the CityGent card.

If you are vegetarian, you would be pleased to know that Ghent is known to be the vegetarian capital of the world. There is even a meatless Thursday! Throughout Ghent city are a ton of restaurants selling vegetarian and vegan food.

While I’m not a vegetarian myself, it was sure interesting trying out the many creative ways that vegetables can be cooked, prepared and presented. 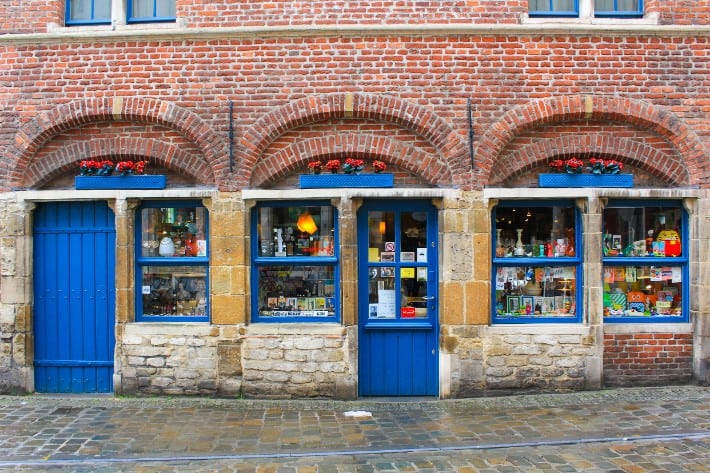 Other beautiful brickwork buildings in Ghent that have captured my fancy are shown above and below. Imagine walking on cobblestone walkways, peering through narrow sidewalks, with the smell of rain fresh in the air, leisurely pedestrians passing your way and occasionally chancing upon riversides.

This is what I absolutely love. 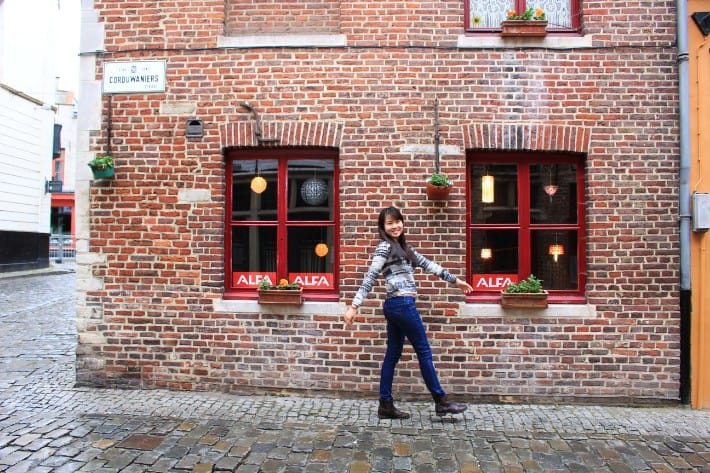 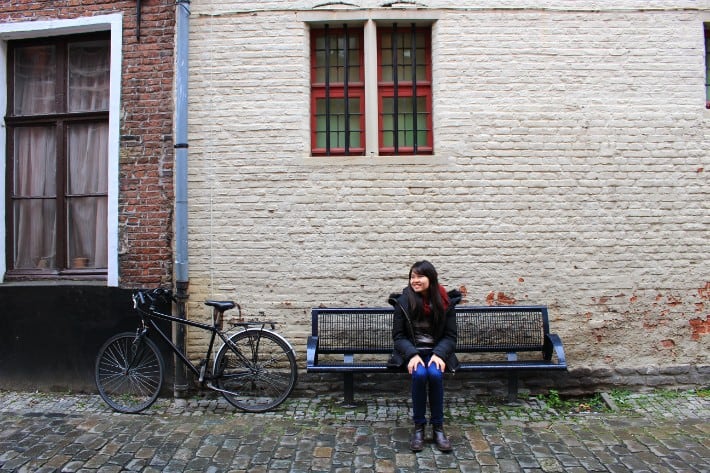 At night, the whole city is even more beautiful because of its specially choreographed urban illumination.

The city of Ghent has even come out with a self-guided tour for this. Similar to Colmar and Strasbourg in France, it is by far my most ideal little town side to retire in!

And so, that concludes my list of the best things to do in Ghent, recommended by a local! (Couchsurfing FTW!)

Pin this for reference!

Have you been to this lovely city? What was your favourite thing about it?

Best Things to Do in Ghent, Belgium + Complete Ghent Guide