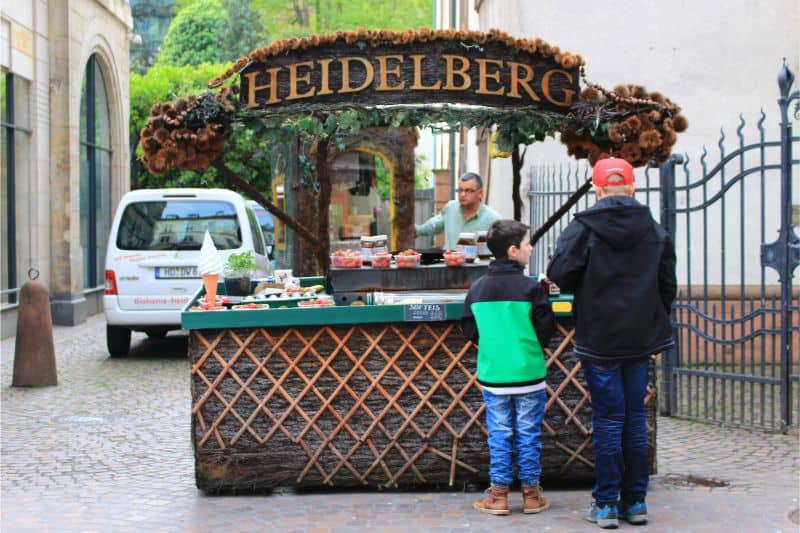 Absolutely Romantic Things to Do in Heidelberg, Germany

Home » Absolutely Romantic Things to Do in Heidelberg, Germany

Our first stop from Frankfurt after reuniting with Brigitte was Heidelberg! To find out about the reason behind this reunion, the story goes on in A Tale of A Touching Reunion Across Continents, After 25 Years. 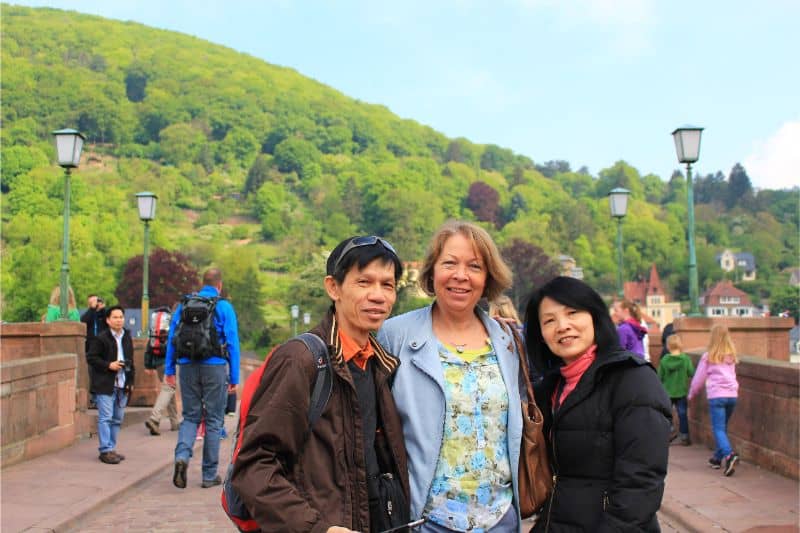 Visiting with our German friend, Brigette!

Heidelberg is an easy day trip from Frankfurt and a city rather different from its financial capital. A university town, you can definitely expect it to be filled with a younger crowd yet has this old school romantic charm to it.

It could have been the castle, the pastel buildings, or the river idyllically flowing through the city, but visiting this town left me filled with a certain calmness that is just hard to describe.

There aren’t many hotels in this small town and unfortunately not all of them are very affordable. If you are just stopping by for a short stay and would prefer to stay near the train station to facilitate getting around, I would suggest Hotel ibis Heidelberg.

If you are in no rush, choose a hotel in the old town itself, so it would be near to the shops and restaurants.
I recommend Leonardo Hotel, Hotel NH Heidelberg for a fuss free stay. If you prefer a slightly more luxurious stay, go for the Holiday Inn or Crowne Plaza.

What to do in Heidelberg, Germany

When I first arrived in Heidelberg, it looked like a scene from a fairytale – 18th century buildings, a stone bridge and a castle. There is something about old buildings and ancient architecture in Europe that is so romantic, isn’t it?

I would not say there is a lot of things to do in Heidelberg but if you are like me and love just walking around, carve some time out of your itinerary and make a stop here to explore this small historic town.

If you have a day here, I would suggest taking a hike to explore the Heidelberg Castle in the morning before walking around the old town in the afternoon to have food and have a relaxing afternoon, before going to see the old bridge in the evening. My family and I did all these by the afternoon before moving to our next destination.

If you’d like to get down and dirty on the interesting things to do in Heidelberg, read on! 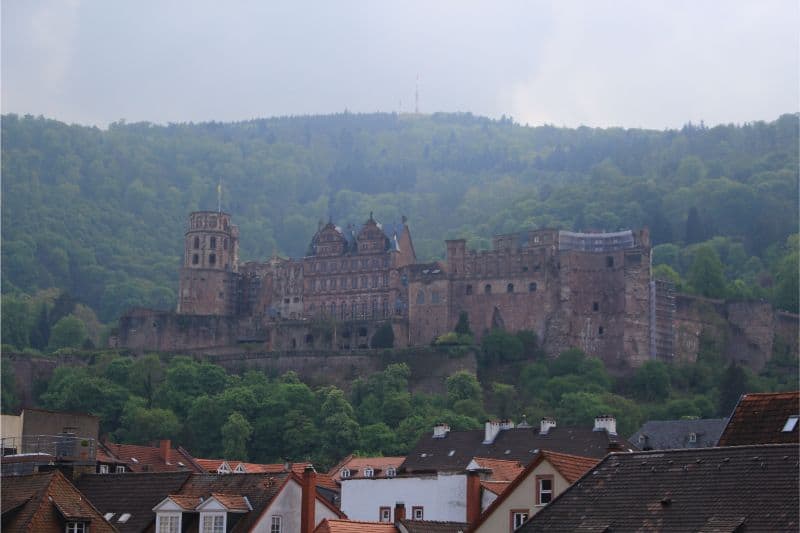 This rust-coloured sandstone castle overlooks the rest of the city and is one of the most prominent structure. From the top of the castle, you will be greeted with a panoramic view of the city’s many orange and red roofs with lush greenery peeking out here and there.

One way to get to the castle is by the funicular. This funicular is one of the oldest ones in Germany and still has its original railcars which dates back to more than a century ago!

There are 2 funiculars to take – the lower and the upper. The lower funicular ticket does include entrance to the castle so I would recommend this option. You can purchase the ticket at the entrance. The price list is available here. To get to the funicular station, take electric bus 20.

We did not have time to go into the castle but if you do, take a wander around to see the flowers in bloom in the gardens and the Apothecary Museum. The museum does charge a fee for entering and the Heidelberg Castle do offer tours. You may find more details on it here. 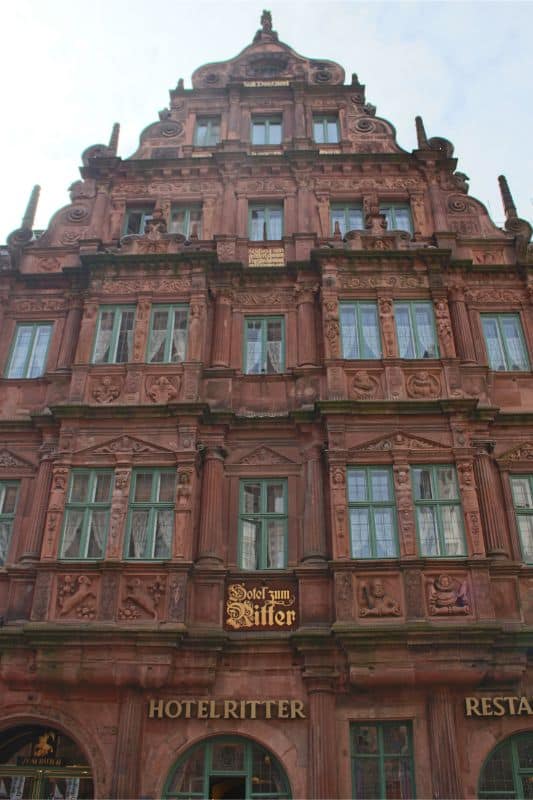 Here’s another facade of an old castle-turned-hotel!

Read on for 12 other beautiful castles in Germany!

After we were done exploring the castle, we strolled back down the path and ended up in the historic old town named Altstadt. Many colourful buildings line the cobbled stone streets and it does remind me of many of the market squares I had been to in my entire journey through Europe. 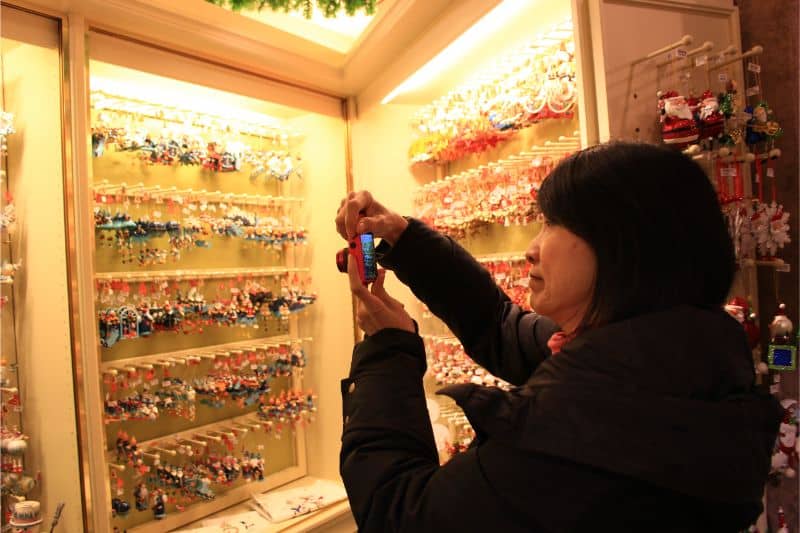 Take a walk around and you will find many cafes and shops. While it is now a place for people to sit and relax, it used to be a place for public hearings where people were hanged and witches were burned in front of the entire town, similar to the horror stories I heard in Edinburgh’s history! 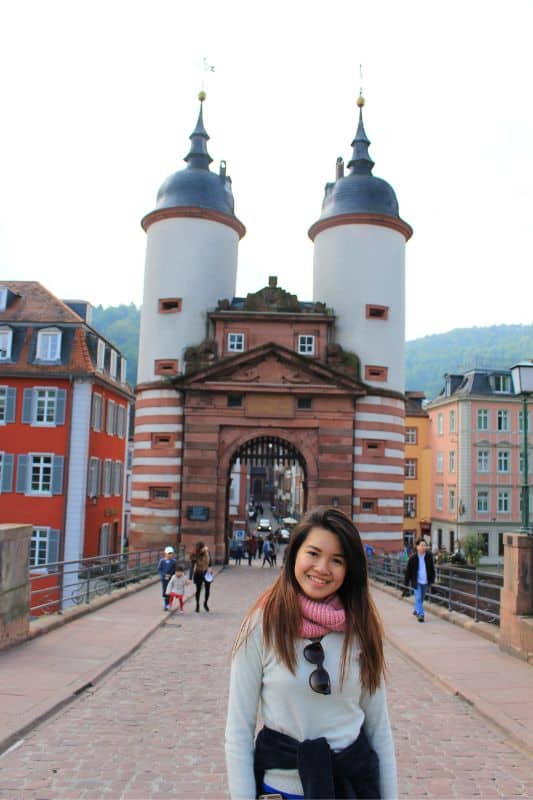 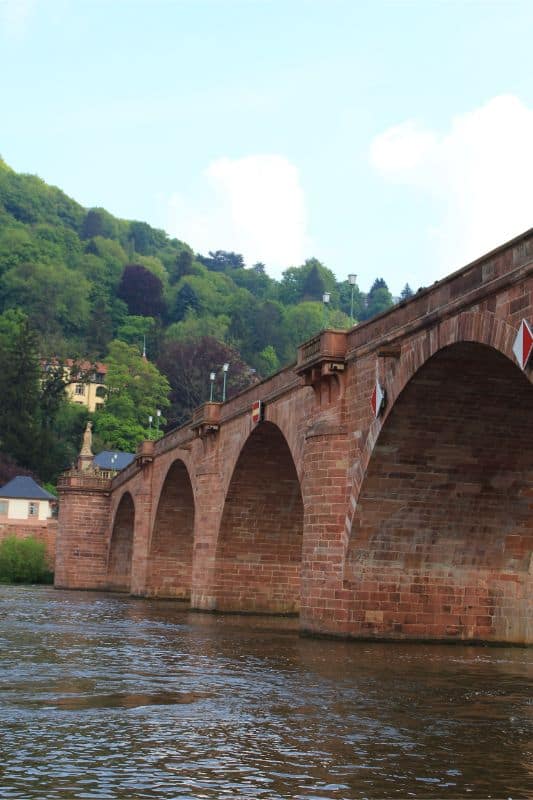 The Old Bridge is also known as Karl Theodor bridge and is the fifth bridge to be built on the Neckar River.

While we did not have the time to visit the old bridge at dusk, I wished we did because I have seen spectacular pictures of the old bridge after night falls. The light engineering on the bridge is specially designed and lights up beautifully with the castle in the background. The reflection of the bridge in the water creates a stunning symmetry for photos. 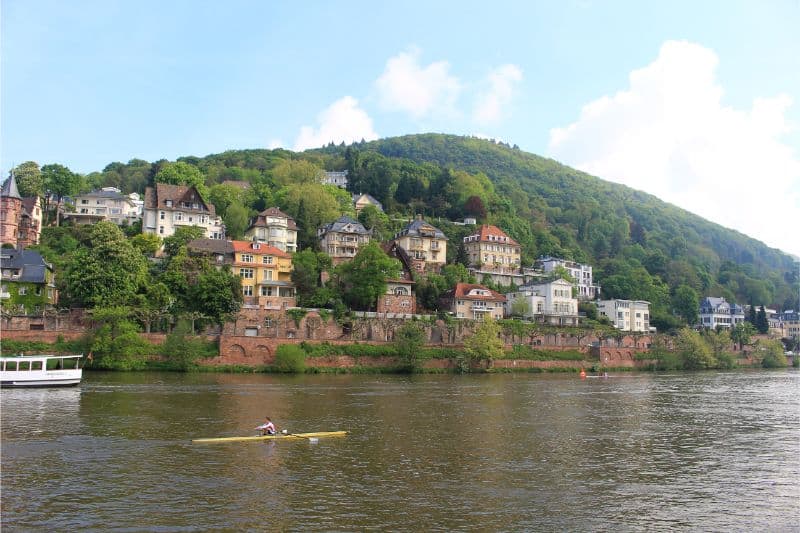 The beautiful houses across the river along the mountains are somewhere I would absolutely love to live if I ever had a chance. I feel like they are close enough to the city yet still secluded in the mountains and nature, don’t you think?

Getting to Heidelberg, Germany

It usually takes slightly less than an hour by train, and you can easily book tickets at Frankfurt main station. Depending on the timing and train, the price might range anything from 20€ to 30€.

If you are landing in Frankfurt airport, there is also a shuttle bus by Lufthansa Airport Shuttle that can take you to Heidelberg for 25€. This bus drops you at Crowne Plaza Hotel right in downtown. From there, you can opt to take a taxi to your accommodation or rely on public transport if you are on a budget.

Getting around Heidelberg, Germany 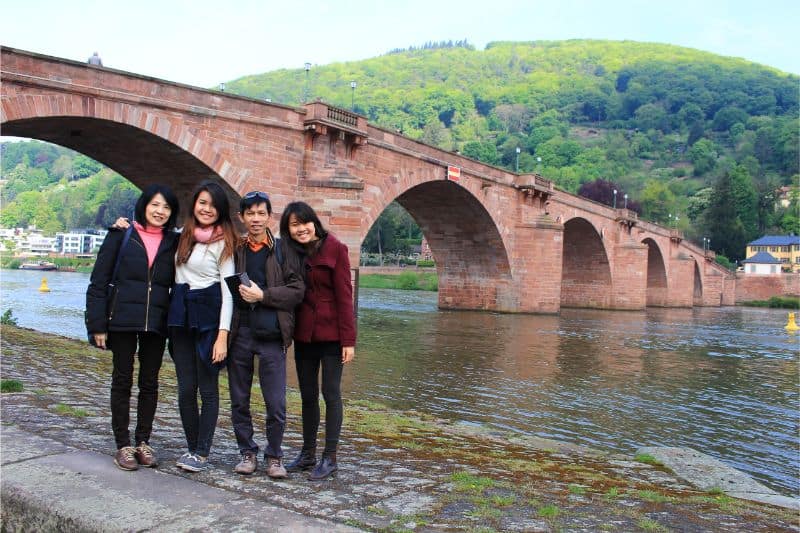 Getting around Heidelberg is pretty easy. The city is very walkable and you would be happy to know that most of the attractions are located close to each other. My family and I were there in May and the crisp chilly air made it rather refreshing to walk around.

You can read more about the getting around Heidelberg in this Heidelberg City Guide.

Heidelberg was a short stop en route to the South of Germany, which holds its own unique rustic charms. Unfortunately, (and maybe partly my fault because I’m promoting its beauty to you!), it seems to be filled with tourists more than locals these days. The other pitstops we did was in Georgensmuünd, Ulm and Munich, all while enjoying the views of Bavaria en route.

A Tale of A Touching Reunion Across Continents, After 25 Years

How to hire a tour guide for free?