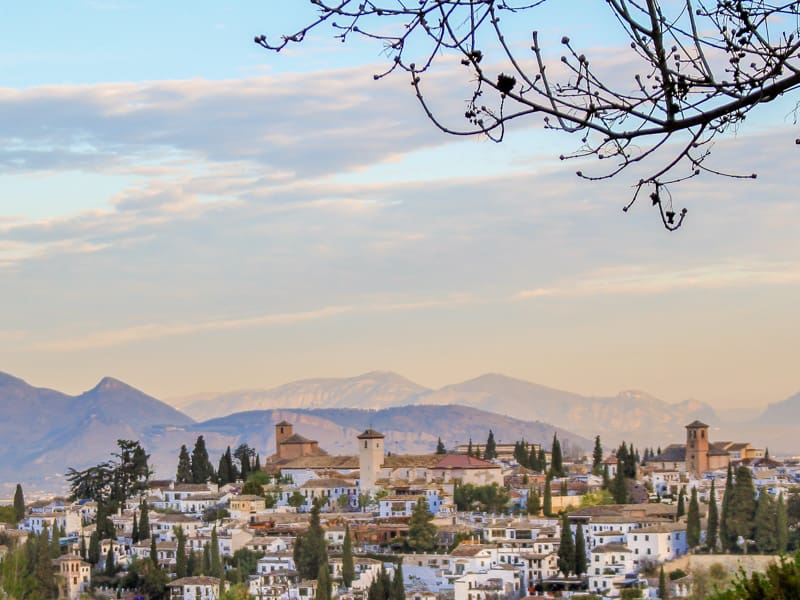 Home » Majestic Things To Do in Granada, Spain So You Don’t Miss Out!

The next time you are planning a trip to Spain, you might want to take a respite from the humdrum of major metropolises like Madrid and Barcelona. Don’t discount the city of Granada, which is considered one of the pearls of Spain.

Historically, Granada sits at the convergence of two epochal periods of Spanish history – when it was partially occupied by the Muslim Moors, and later, the Catholic Monarchy.

This travel guide to Granada aims to help you plan out your itinerary so that you can fully immerse yourself in the tapestried and rich culture of this charming city.

Located in the Andalusian region of Southern Spain, Granada is framed by the picturesque Sierra Nevada Mountains and is home to beautifully preserved architecture from Moorish Andalusia, which it was the long-time capital of. 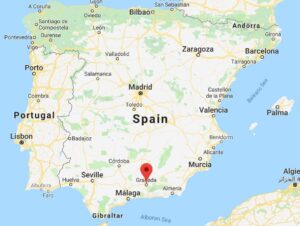 The climate of Granada is rather mild, with summers not getting blazingly hot, nor with winters going below zero degree celsius. Generally, you can survive with a light jacket for most evenings, with the exception of the winter months that might call for a padded jacket.

Summer is usually arid and cloudless, but the low humidity makes the heat bearable, unlike that of Madrid and Barcelona where summers are muggy and sticky.

Rainfall isn’t particularly heavy year-round. There might be light showers, but nothing that will really dampen your spirits or ruin your travel plans. Perhaps bring along a pocketable umbrella to play safe!

Getting to Granada, Spain

Flights run daily from international cities like London and Paris, or regional centres like Seville, Madrid and Barcelona to Granada.

Granada Airport is approximately 12km from the city centre, which translates to a 30-minute drive. If you take the airport bus, it will set you back only €3.

The other major air terminal is the Malaga Airport, which is a considerable 90km from the city and will cost €12 if you do opt to take a bus from the airport to the city centre of Granada.

Alternatively, you can jump on a 4-hour train ride from Madrid (approx €77) or a 3-hour ride from Seville (approx €30), which will bring you closer to the city centre. It is recommended to hitch a bus ride or a private vehicle from the train station to actually get into the city.

The Granada Metro recently opened, which is a light rail line that connects the city centre to nearby towns if you intend to stay there.

What to Do in Granada, Spain 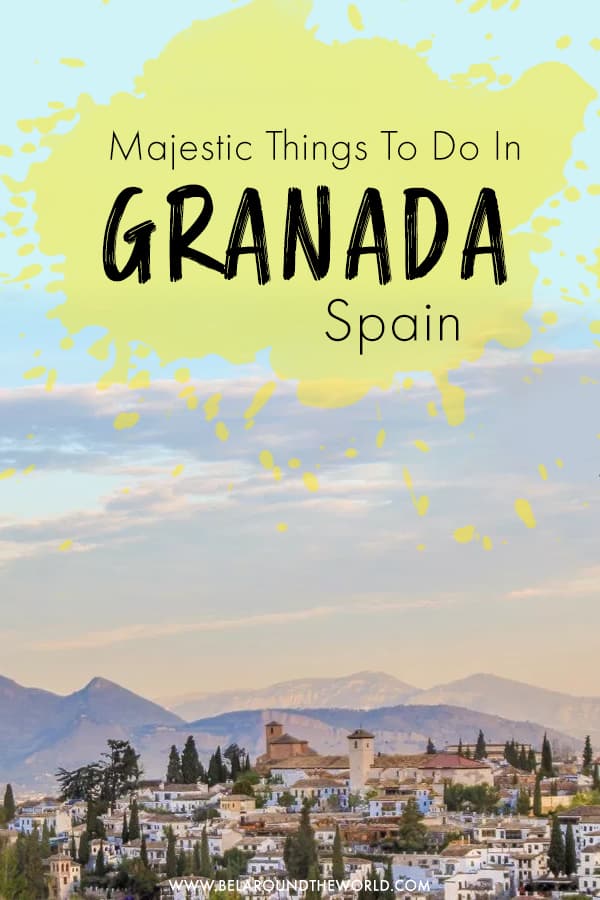 1. Spend a day at the sprawling Alhambra

Granada might have the usual quotient of churches and museums like any other historically and culturally rich European city. However, what sets it apart is the massive Alhambra that dominates the city, which is considered to be the eighth wonder of the world for many. 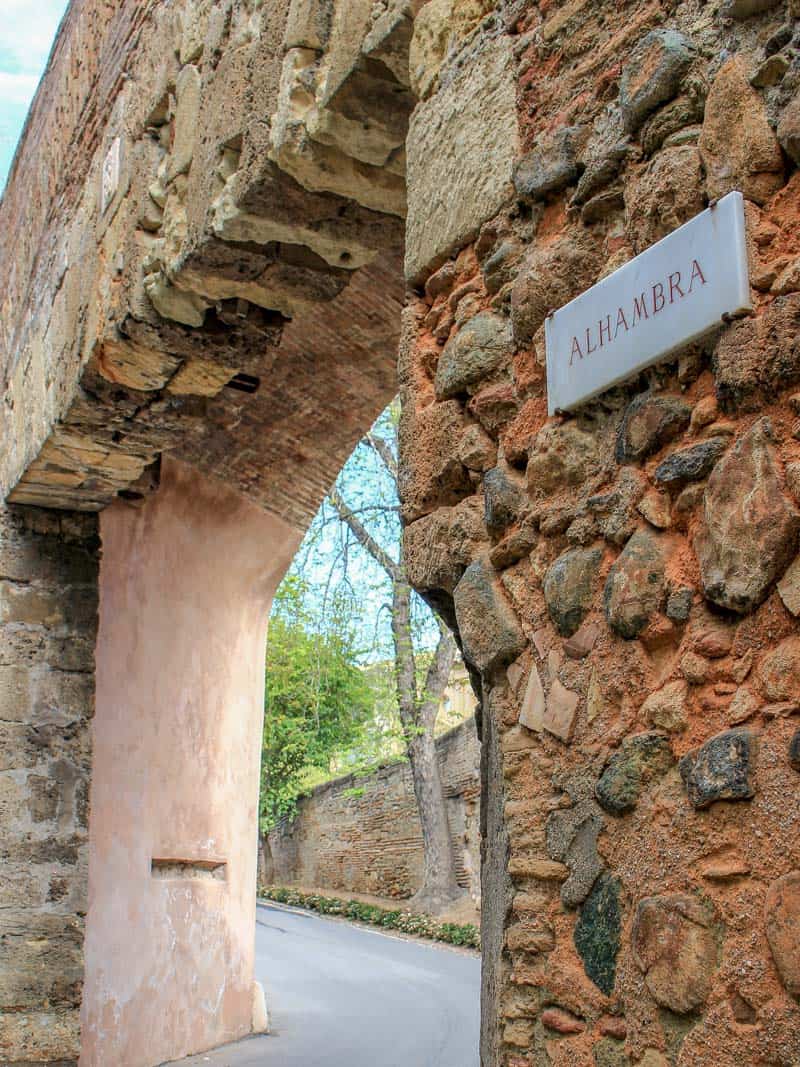 It will cost €14 for an adult to enter the Alhambra if you purchase a ticket in person, but entry is free for children under 12. If you choose to buy the ticket online, the prices will usually go up slightly to €14.85.

It’s essentially a sprawling palace complex that has been slowly built and expanded over the centuries. What makes it so special is that its tapestried history reflects the influences of the two major regimes that ruled the region during its construction. 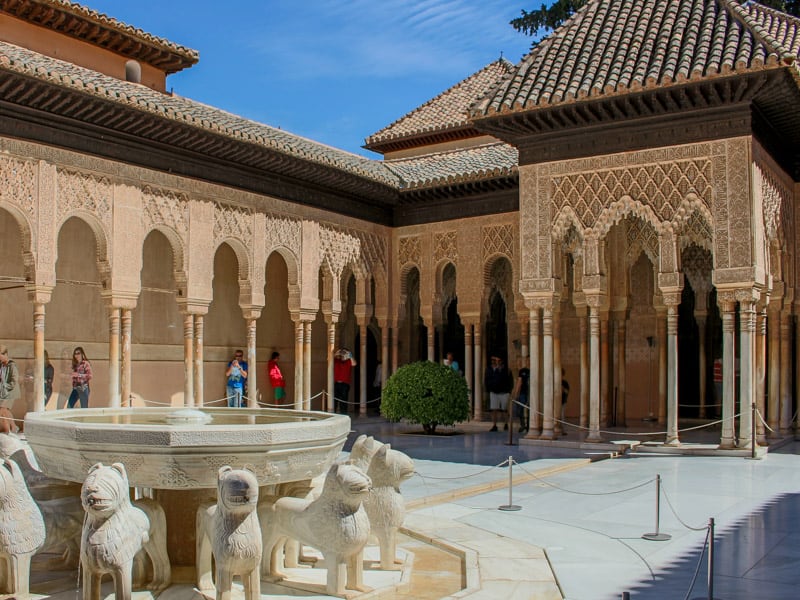 While the Alhambra was initially constructed as an effort to “reconstruct heaven on earth” for the ruling Muslim Nasrid regime, it later became the palace for Catholic monarchs Ferdinand II of Aragon and Isabella I of Castile. 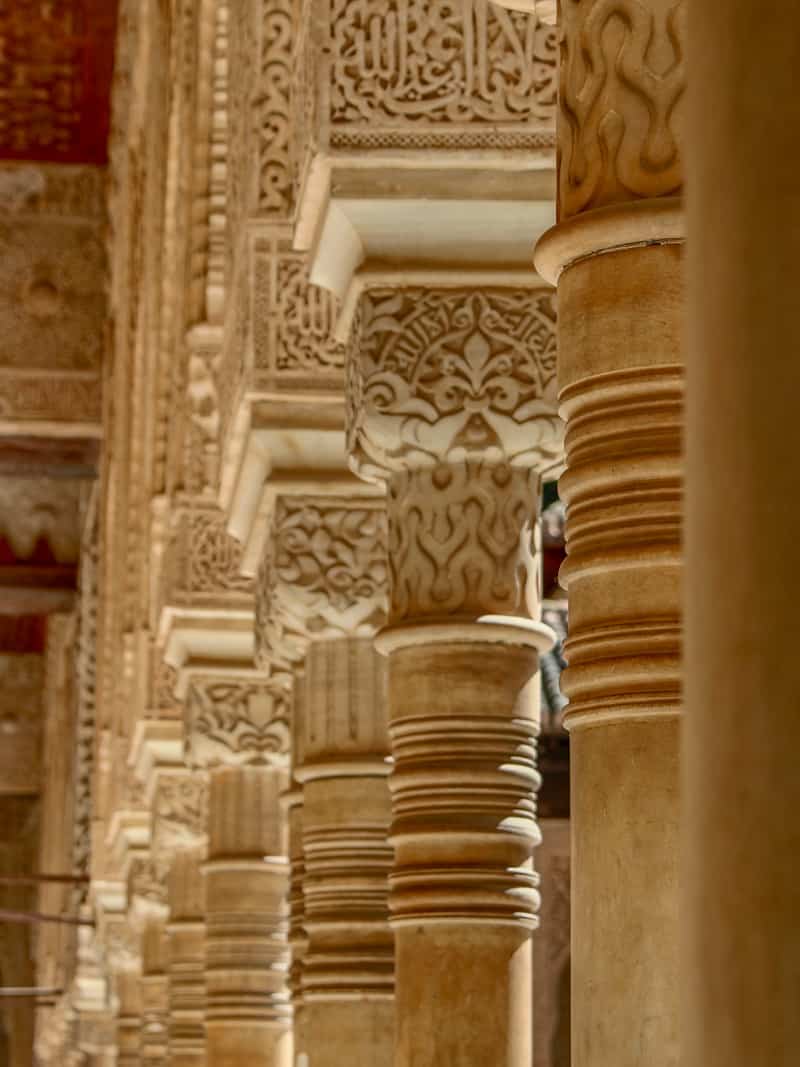 Alhambra means “The Pink One” in Arabic, but don’t be fooled by the deceptively simple pink brickwork – hidden within the walls are delicate and intricately crafted interiors, tranquil open-air courtyards and meticulously kept gardens.

Do note that there is a hard cap of 6,800 visitors allowed into the complex each day. This sounds like a huge number but you’ll be surprised to see it run out during peak tourist seasons – but you can try to get around this by booking a walking tour of the UNESCO Heritage Site with many of the local operators.

2. Be amazed at the Generalife Gardens

Spend some time at the Generalife Gardens before entering the Nasrid palaces, and marvel at this ‘Garden of the Architect’. The Court of the Long Pond still remains one of the most photographed garden features in Europe, ranking amongst heavyweights like the Gardens of Versailles – for a good reason. 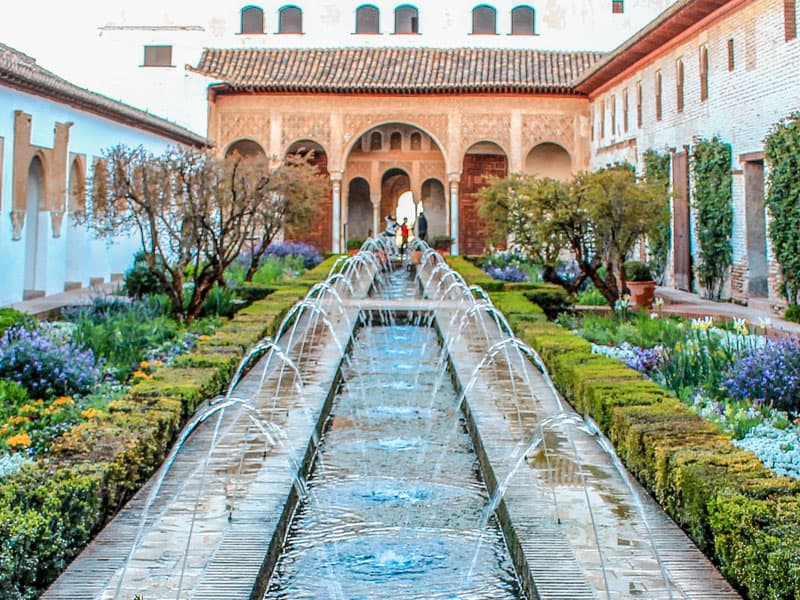 Entry usually comes in a package with the Alhambra ticketing, so make sure to get the bang for your buck and drop by this exquisite garden.

The gardens are designed in a very traditional, formal and arguably timeless style, while incorporating elements of traditional Moorish architecture. 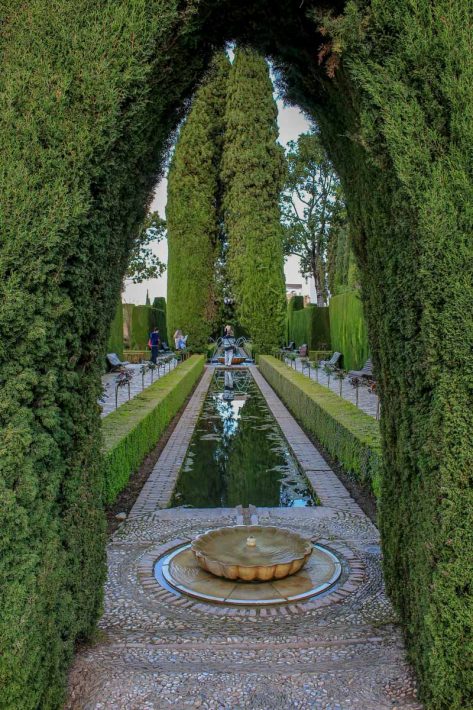 Experience how the water elements interplay with natural lighting, and the positioning of lush greenery designed specifically to please the eye.

A personal tip – if you ever feel hungry after a long day of walking, you might want to have a little pit stop at the Restaurante Calle Real, located within the Granada Parador Hotel. It boasts magnificent and expansive views of the Generalife Gardens, so you can look forward to recharging over a hearty lunch of traditional Spanish foods while enjoying the splendid view.

Andalusia might be home to many neighbourhoods that retain their historical roots, but Sacromonte certainly stands out as one of the most unique. 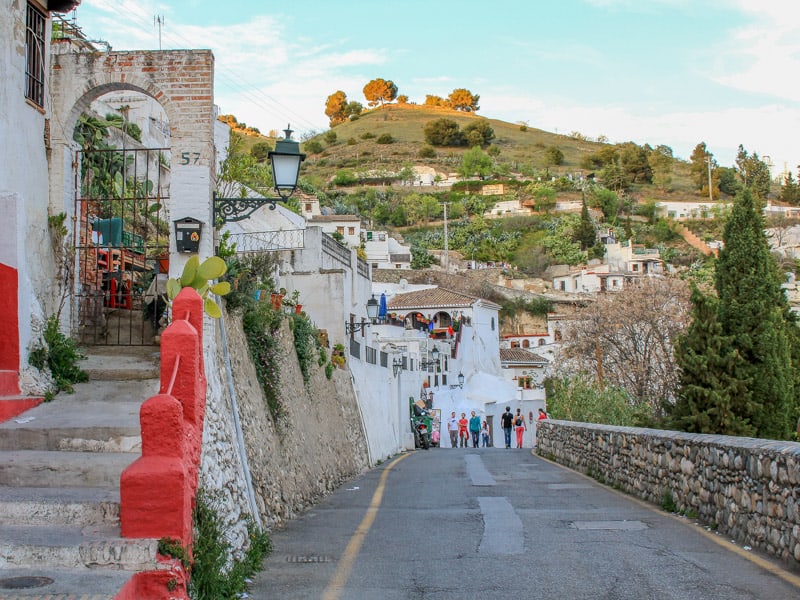 High up on the hillsides of Albayzín, it was the original Gypsy quarter of the city. Many locals still live as the Gypsies originally did, within marbled white caves hand-carved out of the rocks. Pop by for a visit and be amazed at the rustic charm of this unique neighbourhood!

Marvel at the ingenuity and tenacity of locals who have made a home out of practically nothing. You might notice dwellings improvised from wood, cloth, and scrap metal, an uncommon sight in other major cities in the region. 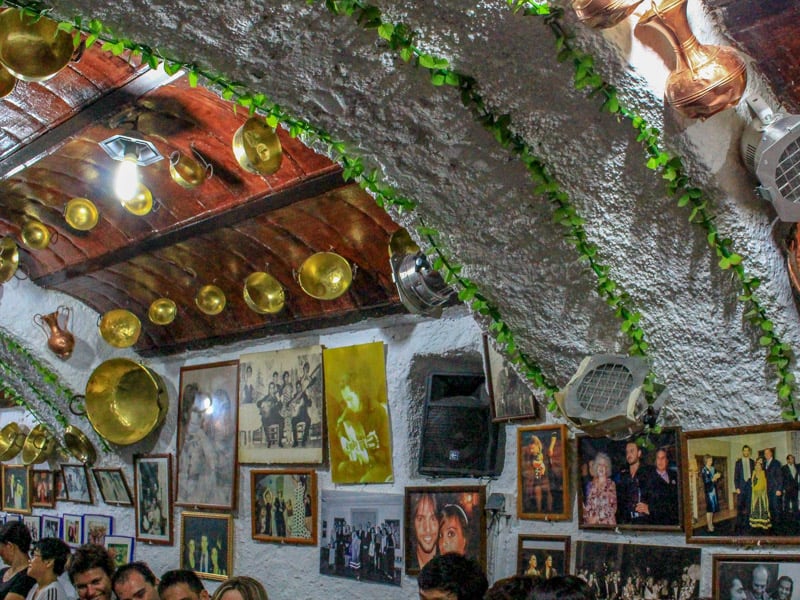 Flamenco remains one of the quintessential aspects of life in Sacromonte. Fully immerse yourself in this demanding art form within a traditional setting by heading to any of the little theatres or bars housed within the hillside caves.

Shows are often held nightly, where you can appreciate the passion and energy of the flamenco in an intimate and cosy cave. Discover the love for flamenco which Granadinos are so proud of!

4. Take a walking tour in the winding alleyways of Albayzín

If you ever do find yourselves with some free time on your hands in between visiting places of interest, you might be interested in taking in stroll in the old Arabic quarter of Albayzín. 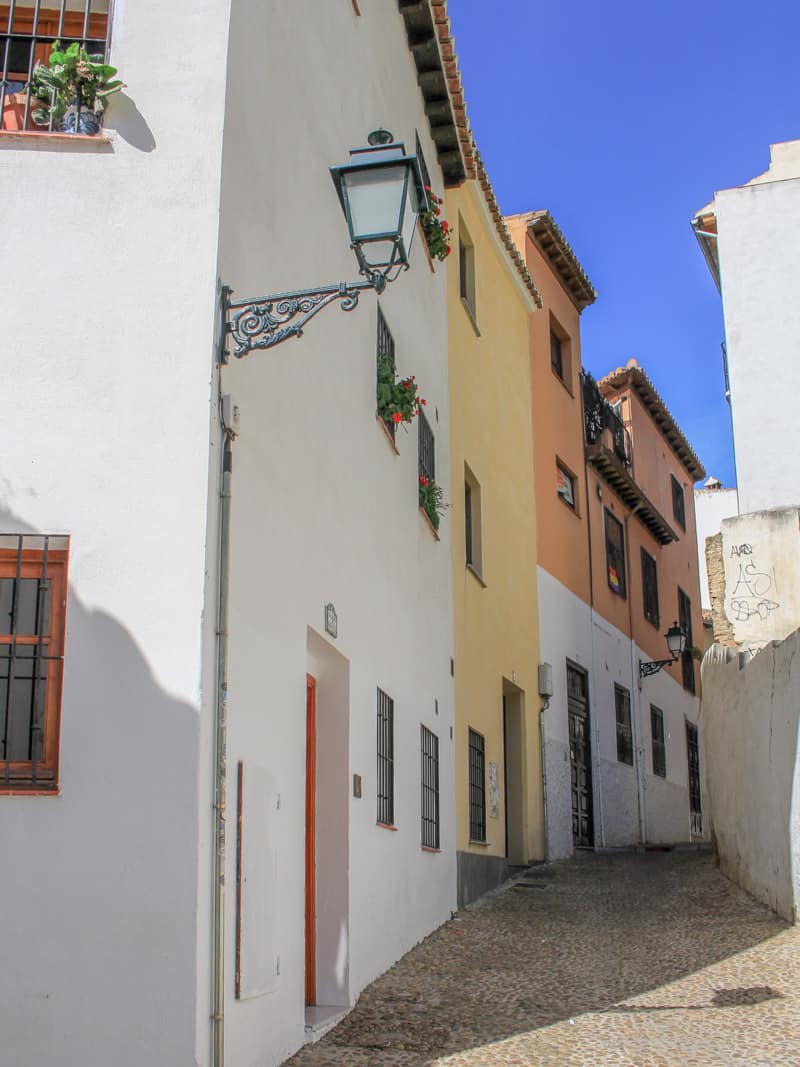 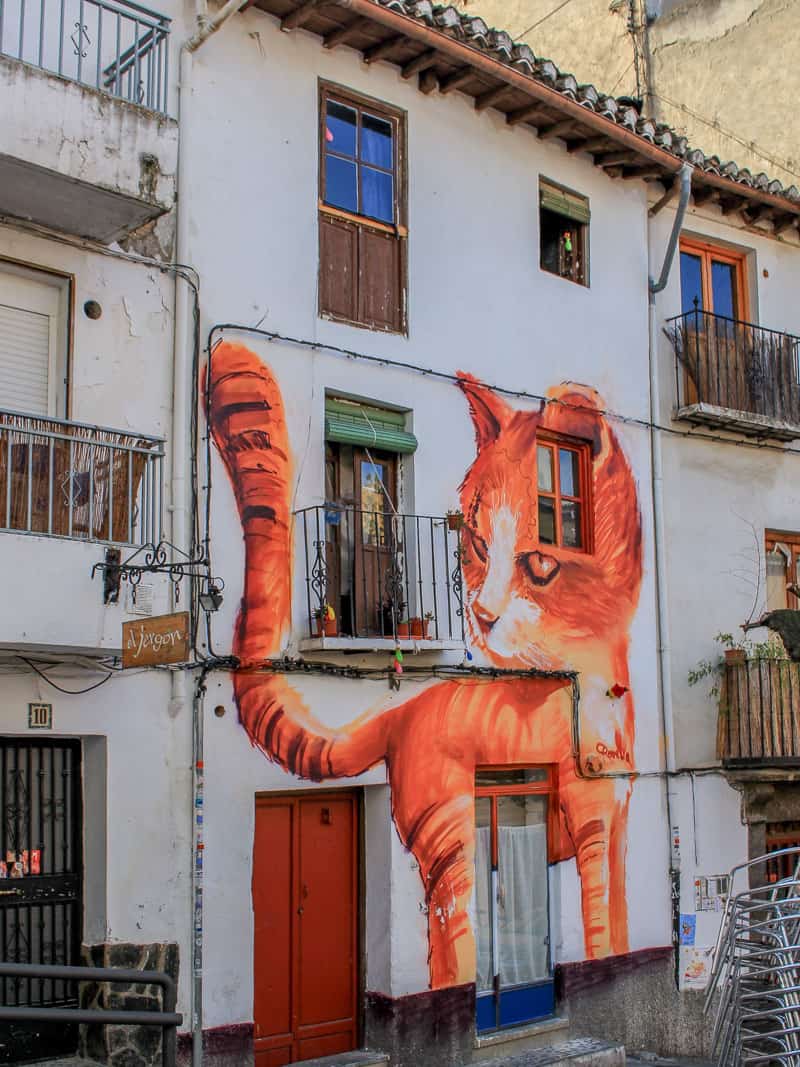 Cobbled and winding alleys, white houses and open, flower-filled squares intertwine to form a scruffy yet beautiful network, all perched atop the hillside across the Alhambra.Slow down and smell the roses, and get lost while soaking in the atmosphere.Alternatively, you can sign up for a guided walking tour of the Moorish quarter with a local who knows the ins and outs of the place. 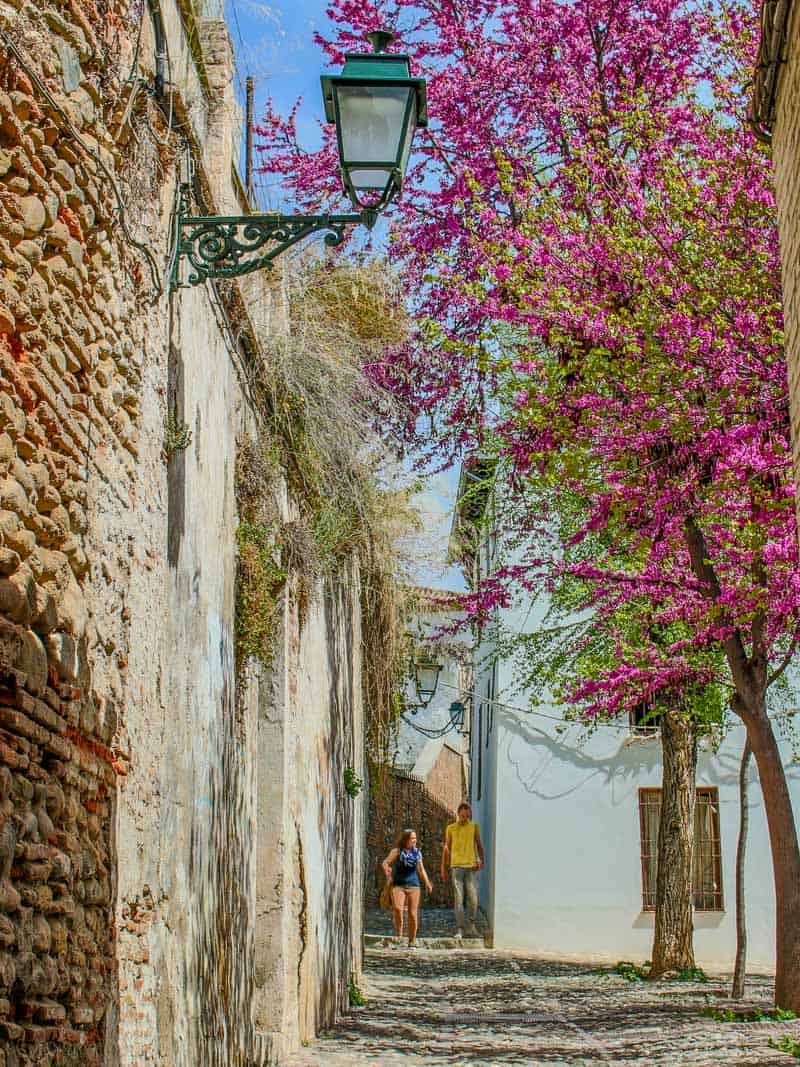 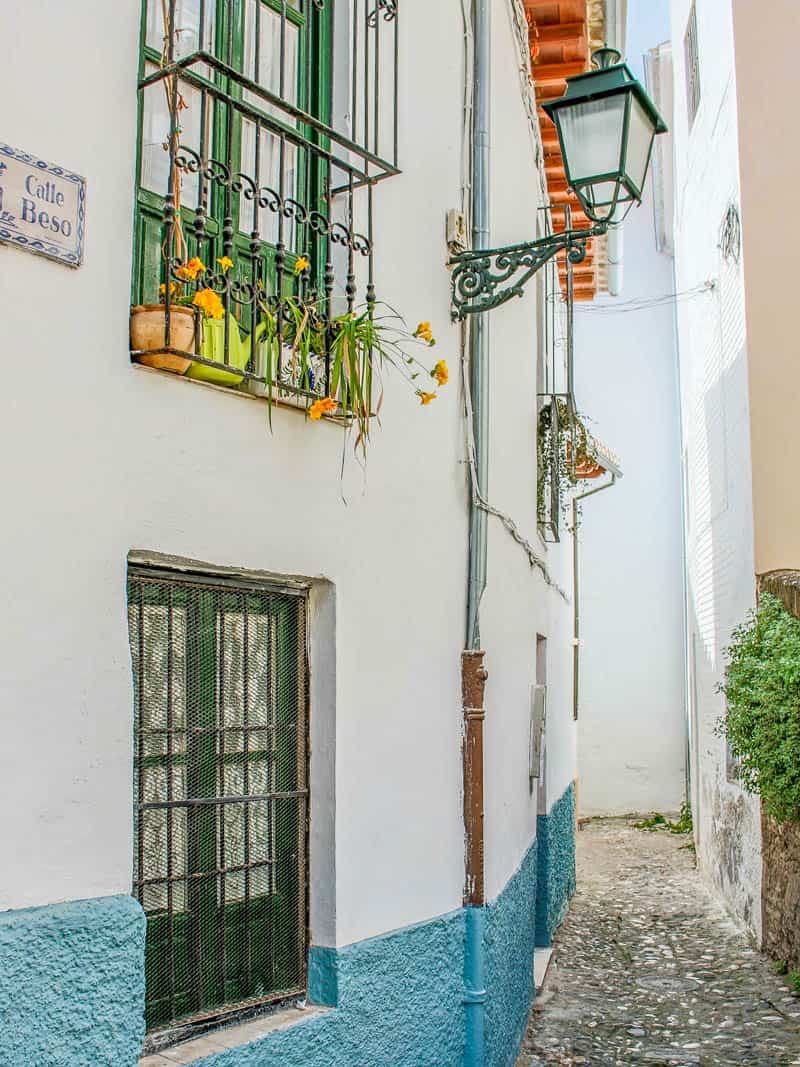 One of the understated pleasures of this neighbourhood is catching a glimpse of the majestic Alhambra and the picturesque Sierra Nevada mountain range. 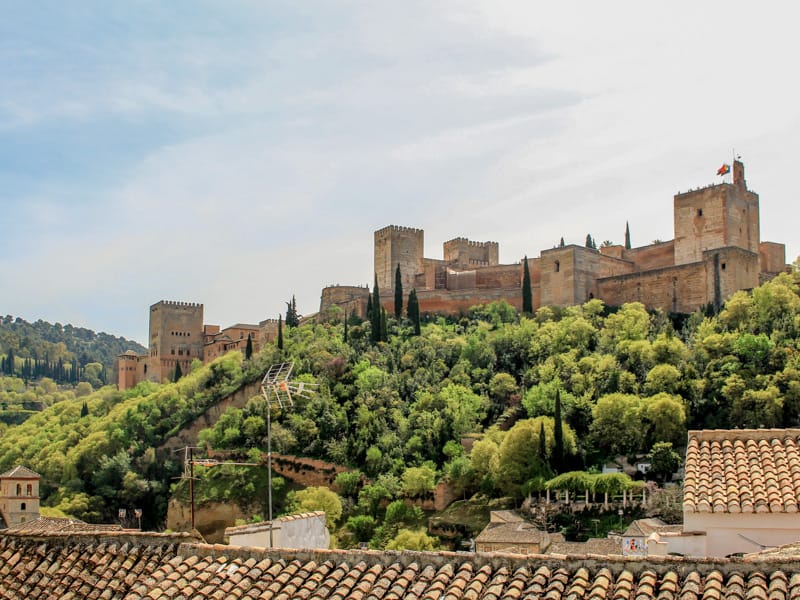 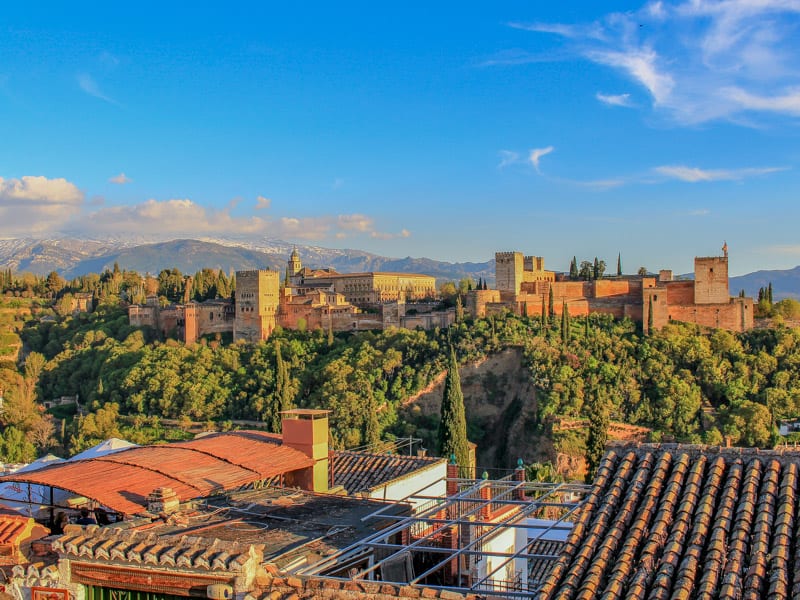 The famous Plaza Nueva and Mirador San Nicolas Square are also located here too. The San Nicolas Square in particular is considered to be one the best in the city, perfect for a lazy afternoon of people watching, or to quote ex-US President Bill Clinton,

To catch the most beautiful sunset in the world.

If you’re lucky, you might even stumble across an impromptu flamenco performance from the local gypsies at the Plaza Nueva, located only a few minutes from the centrally located Alhambra! 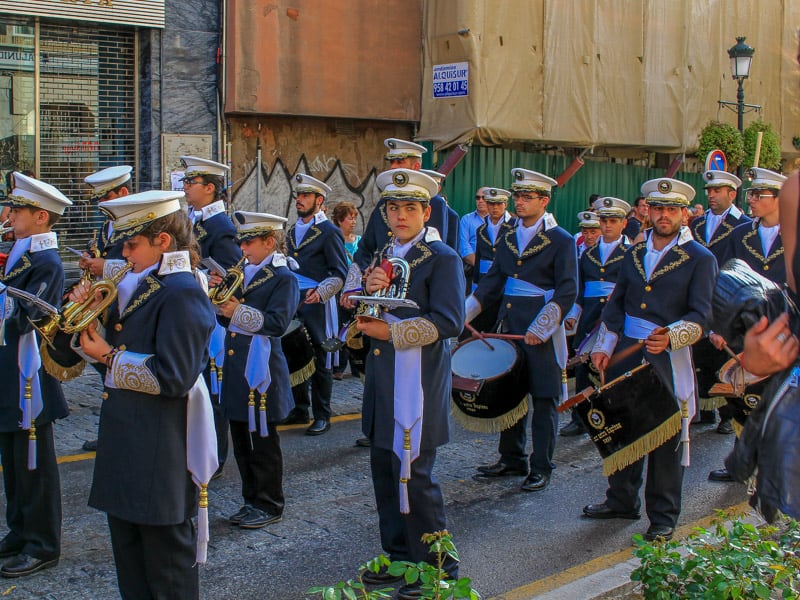 As you traverse down the street, keep your eyes peeled for great deals on colourful pottery, handicraft and generally a whole range of goods that you might want to bring back home as keepsakes, or simply to admire. 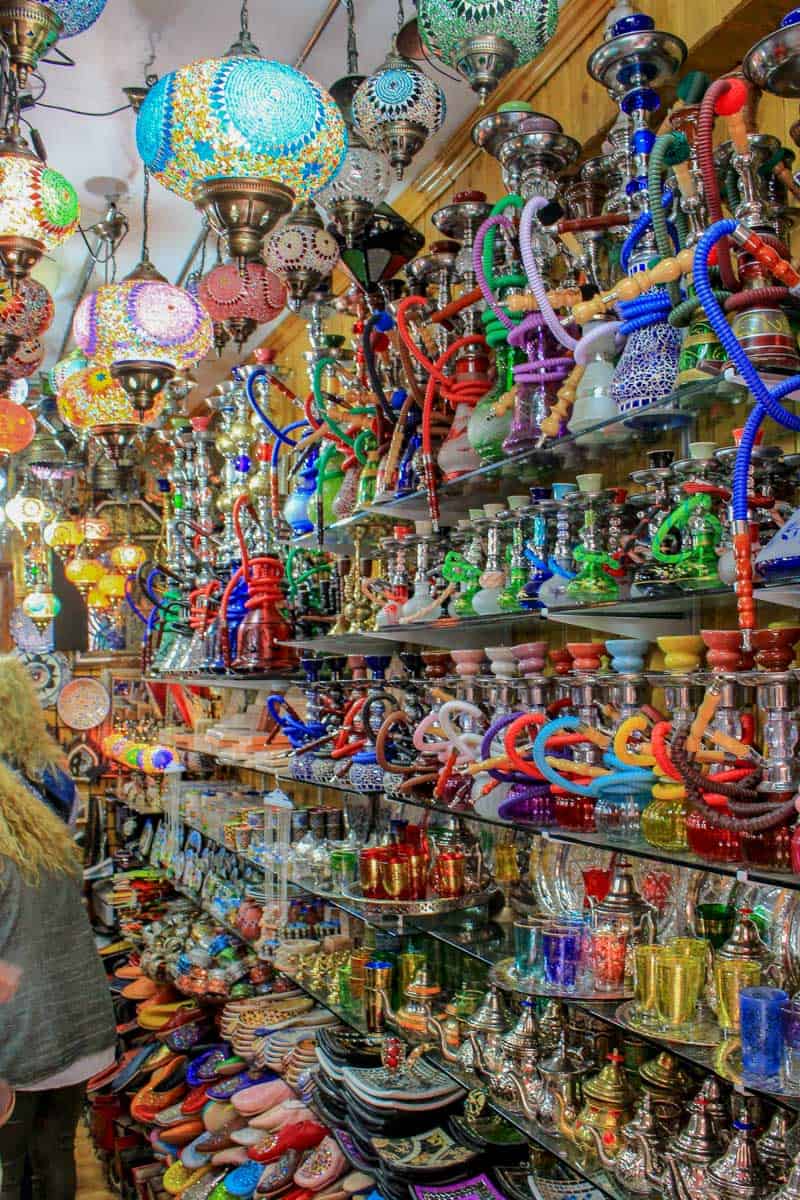 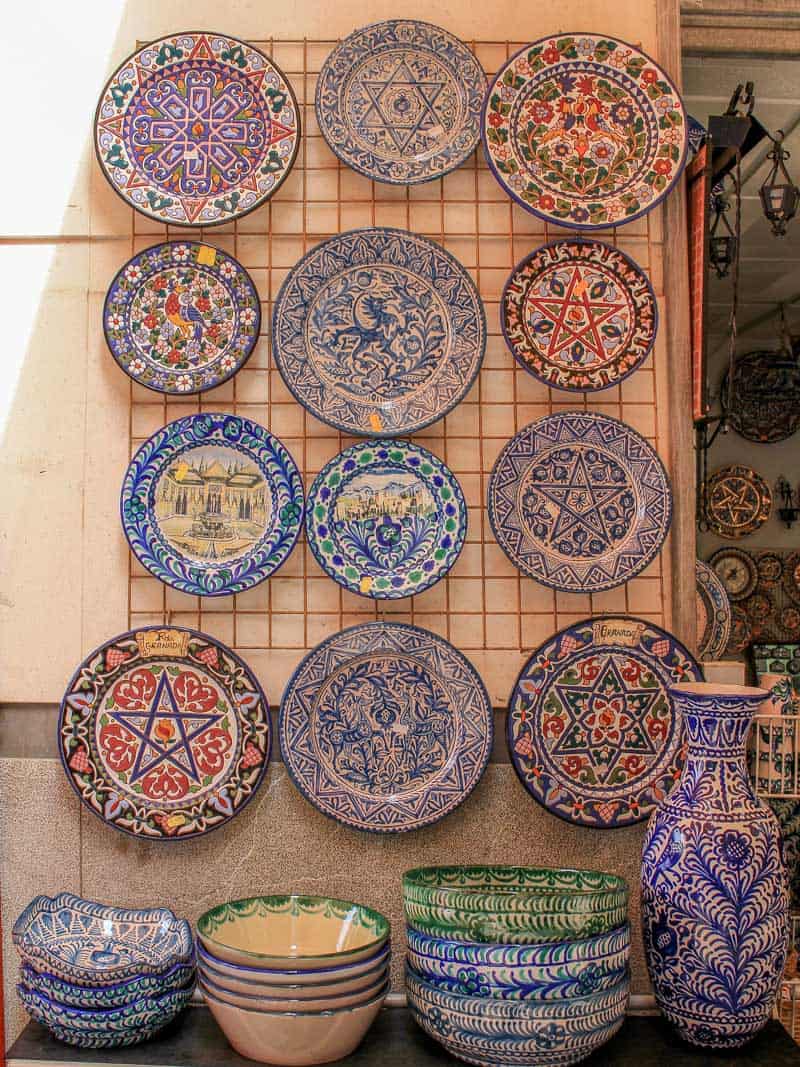 5. Steep yourself in history at the Royal Chapel

The imposing Royal Chapel of Granada is, to this day, the final resting day of the Catholic monarchs Ferdinand II and Isabella I, as well as their children, Phillip, Juana and Miguel. 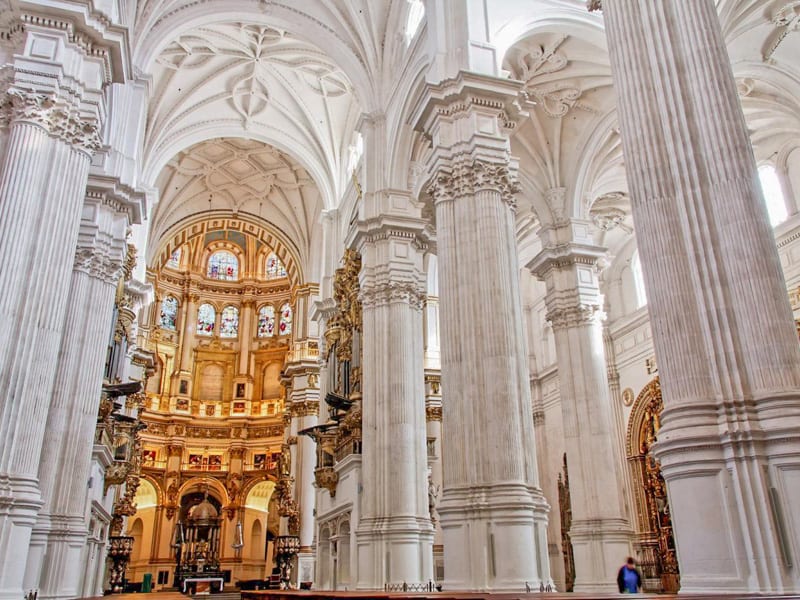 It is located between the Granada Cathedral and the Old Fish Market, and was designed specifically to complement the existing architecture of the cathedral that was already standing at the time of construction.

Entry prices range from €5 for general admissions to €3 for children and those with disabilities. These do come with a free audio guide that will aid your appreciation of the Royal Chapel. 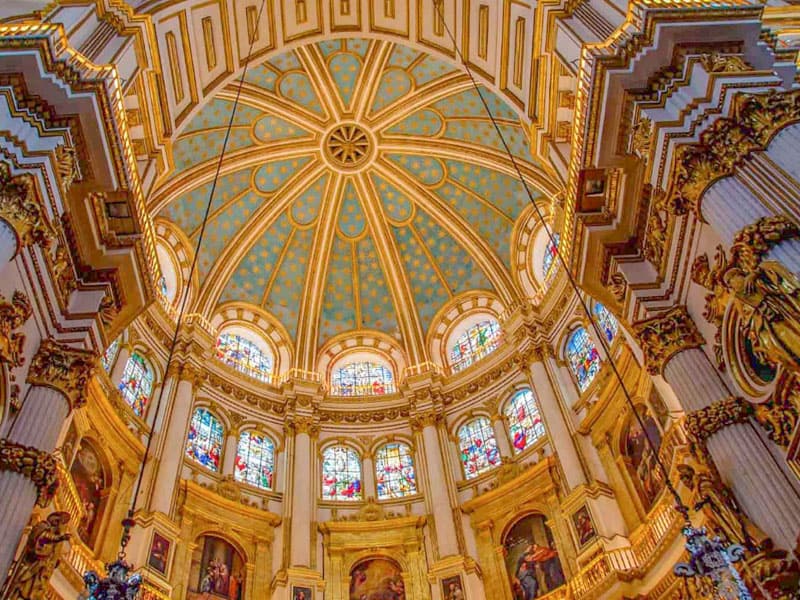 Alternatively, get on a guided tour to fully appreciate the history and architectural nuances of this wonder!

6. Ski down the slopes of the Sierra Nevada

Although most people will associate Spain with sunshine and beaches, Granada stands unique in its geographical proximity to the most southerly ski resort, Sierra Essence. 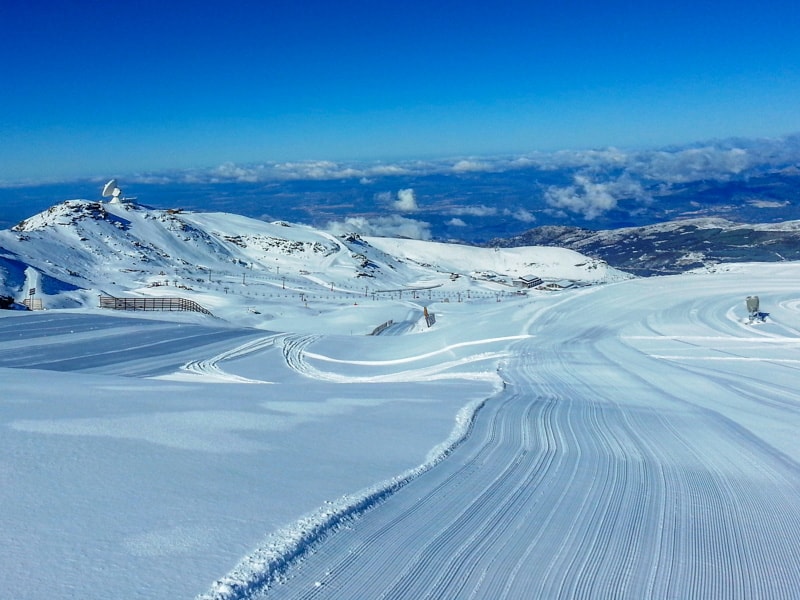 It is possible to spend a morning whizzing down the powdery snow of the Sierra Nevada, and spend an afternoon sunbathing on golden, untouched beaches in Almeria.

If you’re lucky enough, you might even be able to spot North African mountains just a stone’s throw across the Mediterranean on a clear day! How great does that sound?

7. Gorge yourself on tapas

What better way to learn about Granada than through its food? You might be pleasantly surprised to find a complementary platter of snacks that come along with tipple if you do order them in Granada. 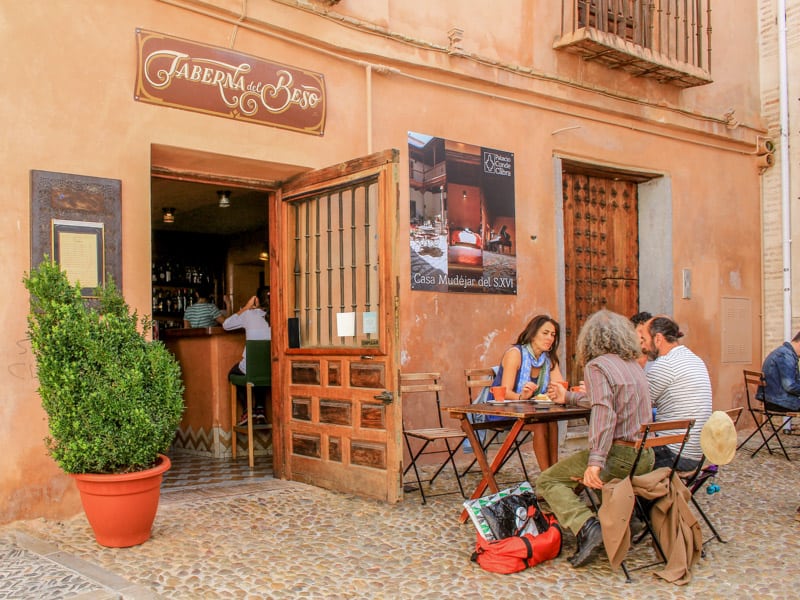 Serving tapas are one of the customs held in Granada, be it a sizzling pot of seafood, hunks of bread served with stew or paella. This means that there is such a thing as a free lunch in these parts! 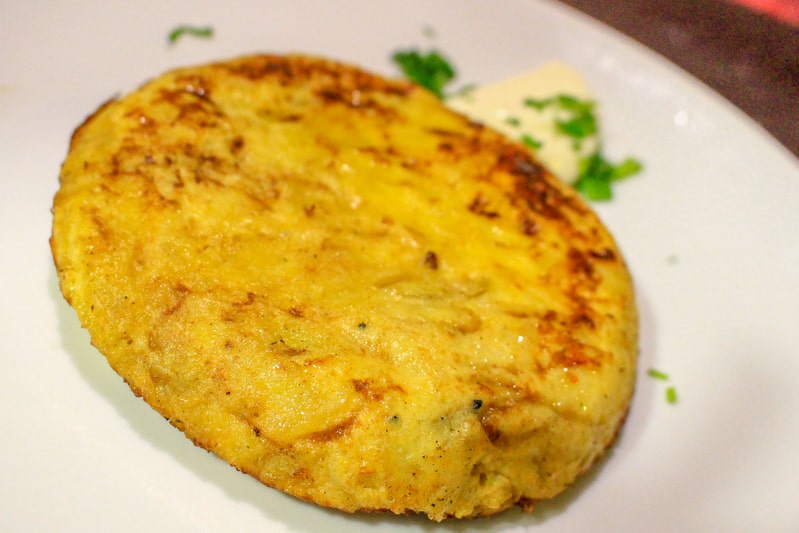 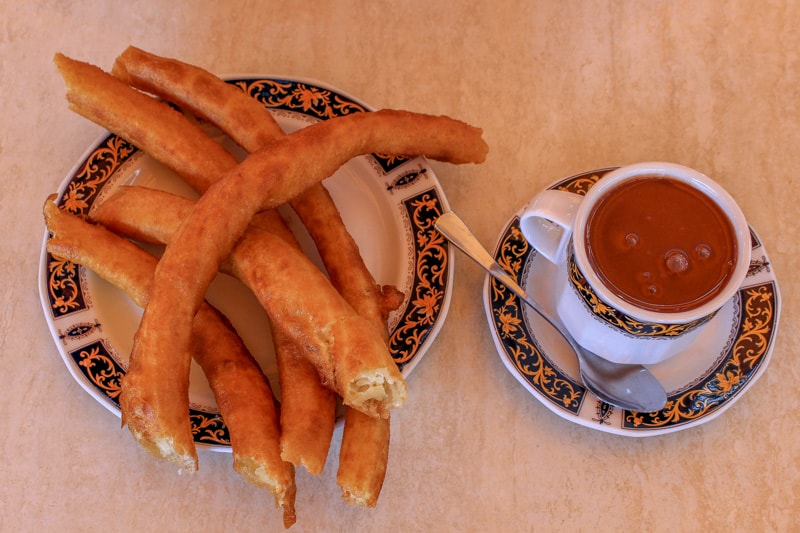 You can opt to go on a guided food tour hosted by the locals, or even drop by any of the many tapas bars situated along virtually every street while exploring the vast networks of squares and alleyways.

8. Chill out in a traditional Arab bath

Although the climate in Granada is rather mild, and things usually don’t get blazingly hot, you still might find yourself wanting to unwind with a hot bath.

The traditional Arab bath was a focal point of Moorish social life, second only to the mosque. People would cleanse their bodies in baths of different temperatures in several rooms, often opting for a massage to reduce stress, improve blood circulation and provide essential minerals and vitamins for the skin.

Prices range anywhere between €20 for a basic 90-minute bath at Baños Elvira, to €86 for a bath and a 30-minute massage at the Hammam. 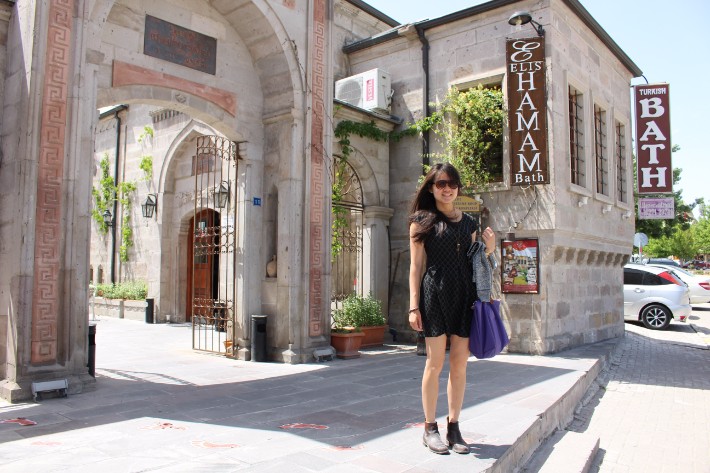 Doing a Turkish bath in Cappadocia

There are many of these traditional Arab baths located around the city, and it is relatively inexpensive and convenient to drop into any one of them for a nice chill out session after a long day of walking and eating! 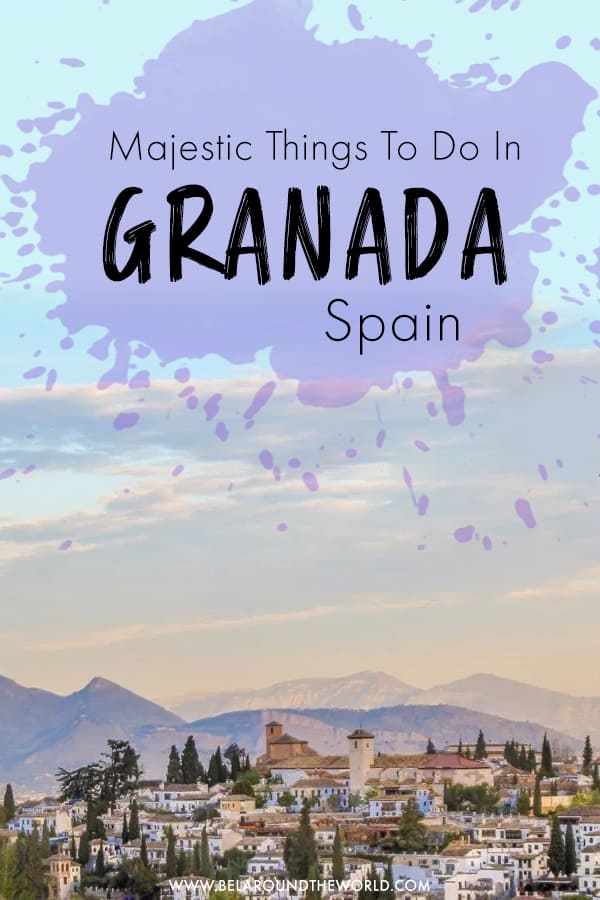