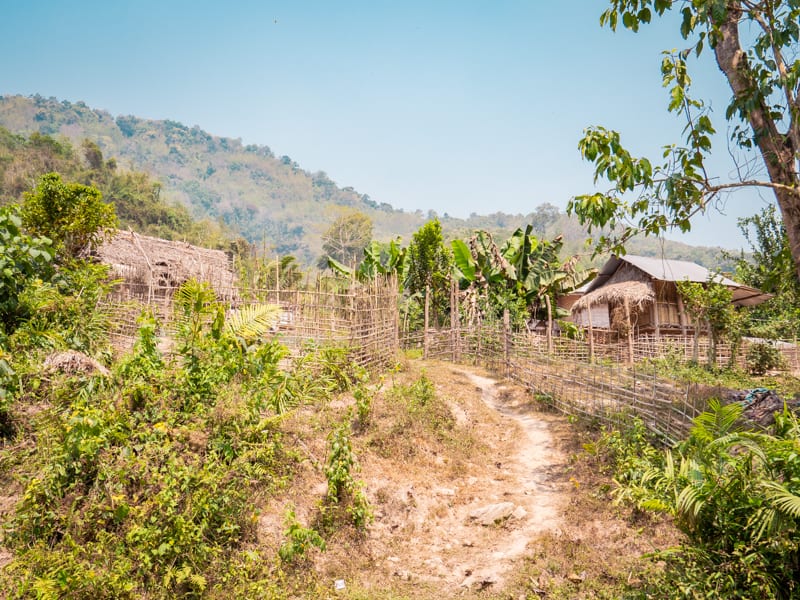 Have you really done primitive living if you haven’t done these?

I don’t know about you, but most of us live in a first world country where – pardon the odd example – having soap is taken for granted.

The most primal living I’d consider myself to have done was back in my university days where I signed up for an Overseas Community Service project doing community work in a village in Vietnam – Gia Bac.

The group of us students lived in common quarters which also doubled up as our living and play quarters. It was in the village’s community library.

We were there in Gia Bar to educate the school children about hygiene and sanitation. We donated sustainable water filters brought over from Singapore. We carried bricks and built toilets.

Our shared toilet was dark and dingy to the point where I remembered not wanting to poop, for fear of staying a minute longer in there and being attacked by creepy crawlies. Call me spoiled, but I have also learned important lessons from such humbling experiences. 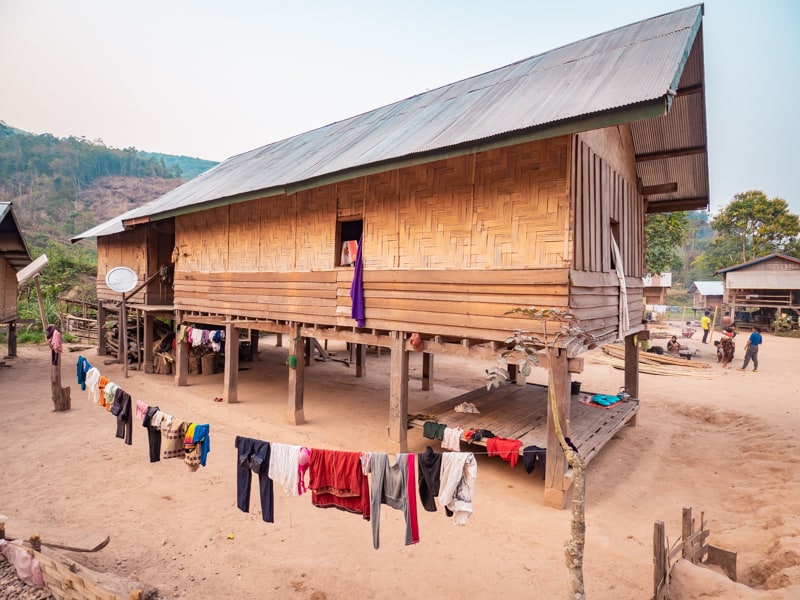 Fast forward to 2019, my travels have brought me to yet another primal experience. As part of Luang Namtha’s push to encourage tourism to visit their grounds and understand local living and the ethnic minorities, I was invited to try out local homestay experiences.

There was this one homestay I can never forget about.

The homestay at Nam Ha village. 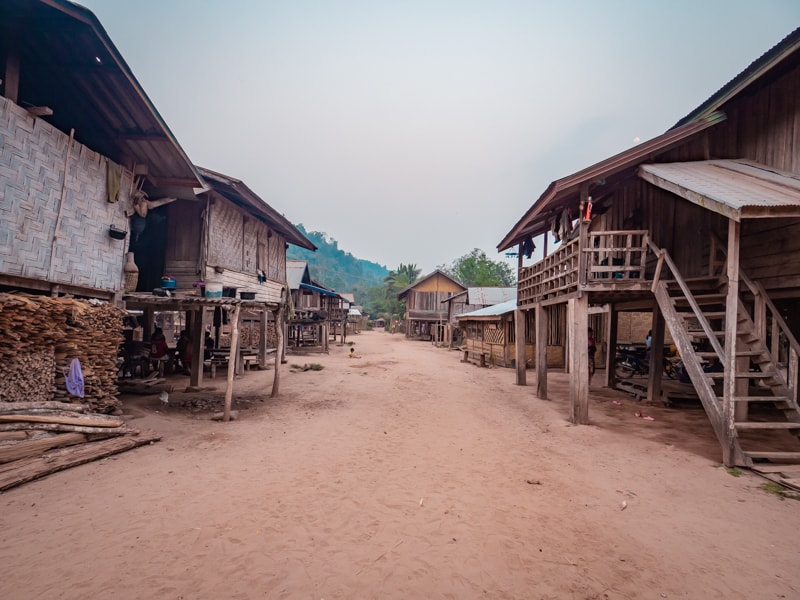 Nam Ha village is dominated by the Khmu people (an ethnic minority in Luang Namtha). With a small community of 53 families and 208 villagers that make up the village, there are 12 homestay and 1 eco lodge available for passing tourists to stay and experience the local life.

Unlike the other homestays we stayed in Luang Namtha, this felt like the truest homestay experience. They live without electricity and power lines, relying mostly on the natural environment to get by. 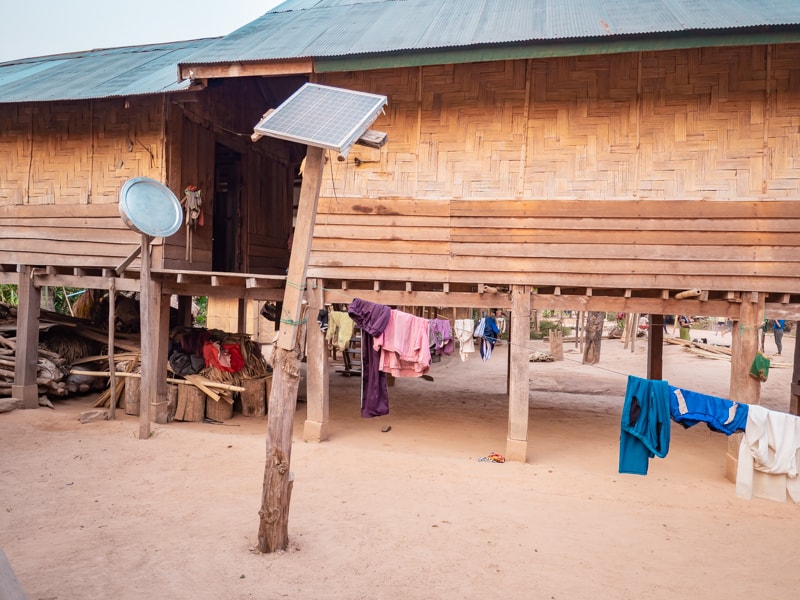 The one and only solar power panel in the village

Villagers, I notice, get by their days sawing wood for building houses, playing speak takraw with a rattan ball, and sitting around chatting. Chickens would roam the village grounds with their convoy of chicks, while the elderly spend easy days smoking and drinking.

1. Want to get clean? Shower (almost naked) in the public river. 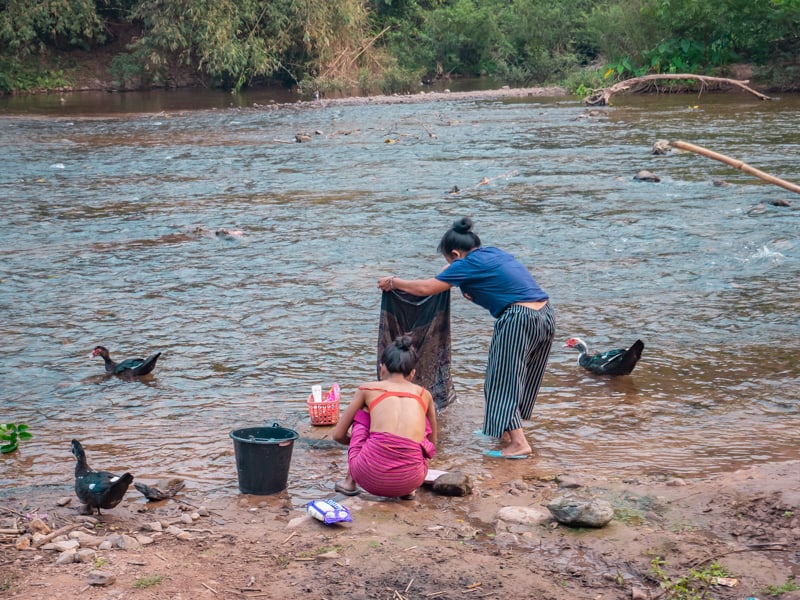 Doing laundry and showering in the same river.

It is where everyone from the village go to shower daily – men and women, boys and girls. At the risk of sounding like a creep saying this, it’s quite a sight to see the little children splashing about while showering in the water.

How do we shower in full view of the village? The standard practice is, after changing out of our clothes, we wrap our bodies with a cloth, and plunge ourselves into the cool river to clean ourselves.

2. The very same river is used to clean meat for cooking. 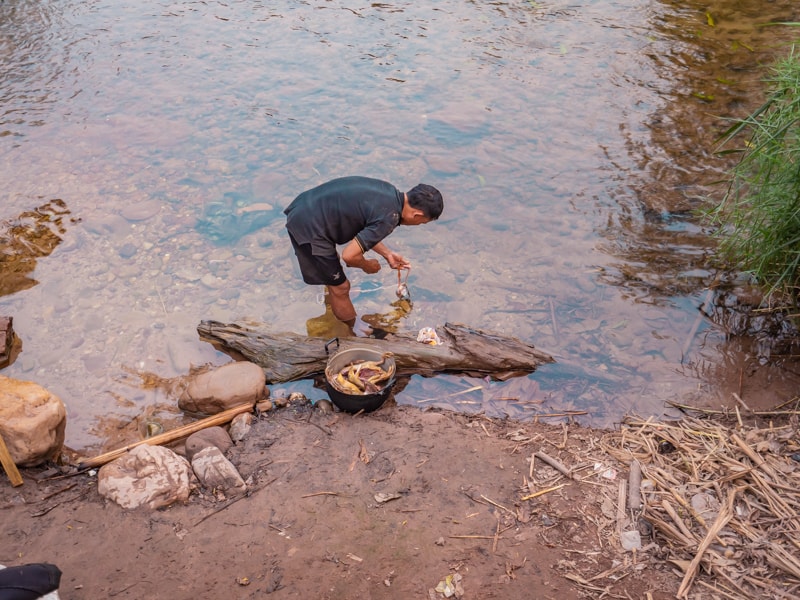 Washing our duck in the river

On that note, it was after the bath when we were strolling downstream that I noticed the village chief washing the duck that will be our dinner that night in the very same river.

The key here is to keep an open mind. 😁 After all, we were all famished from the full-day hike to get to the village, and were well-fed and healthy after. Mostly, I was filled with gratitude at the spread they prepared for us.

3. We witnessed our dinner being de-feathered and de-skinned. 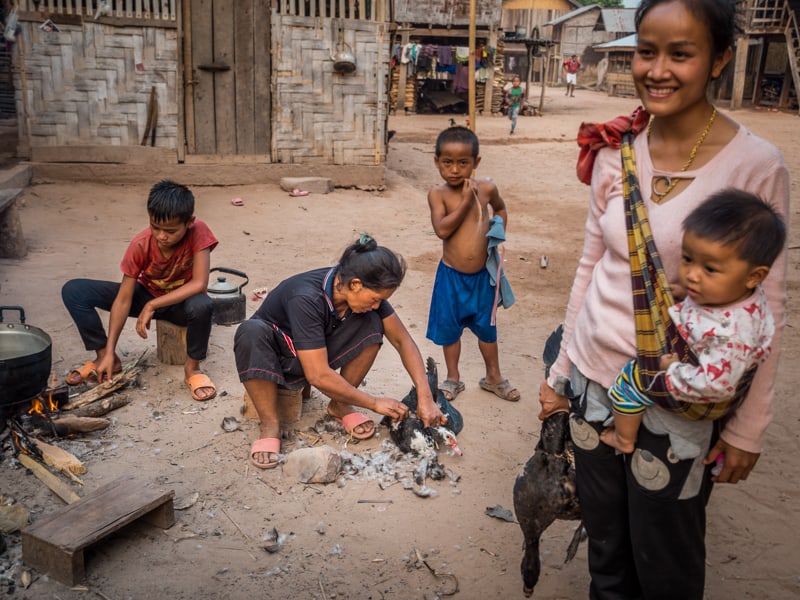 De-feathering the duck that will be our dinner.

We watched them de-gut, de-feather and cook the same poor ducks that were roaming just moments before we arrived for our dinner.

Before you call me a savage and inhumane for being able to stomach what I saw being killed, this is the village’s way of living.

May I remind us omnivores (or non-vegetarians) that the very piece of chicken you eat from KFC is also slaughtered this way, if not worse. They are injected and placed in cramped spaces with nowhere to roam. Talk about humanity. If you haven’t watched Food Inc, I highly recommend you to!

It also explains why meat in Laos is significantly tougher and less meaty than most other meat I have at home – the poultry are all free to roam here.

More countries need to ban killing like how Bhutan’s law prohibits killing of any kind – including animals!

This is also similar to the Farm to Table campaign I experienced in Thailand’s Samut Sakhon, where we visited farms and procured ingredients direct from farmlands to put on our dining table. You then know that these dishes are 100% organic! 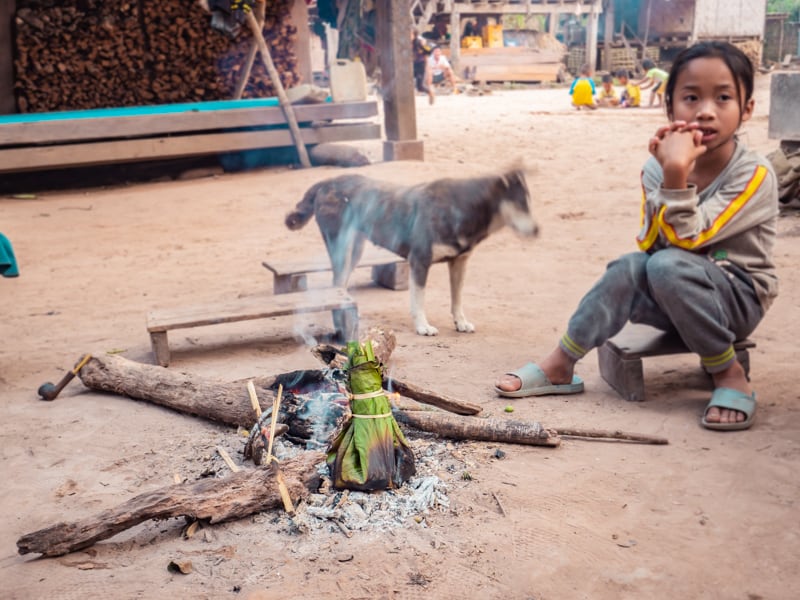 To get to Nam Ha village, we had to do a whole day trek. We were trekking in Nam Ha National Biodiversity Conservation Area when it was time for lunch. We stopped at a clearing, and the guides were on to it, preparing our meals over a campfire.

Sure, this might not sound out of the ordinary since we roast marshmallows over campfires all the time. What is impressive though, is how they used almost all the materials for lunch from the natural surroundings – spoons folded from a leaf and fastened with a toothpick, the table mat for food made of large banana leaves, the “pot” for boiling soup using the hollow of the bamboo plant, the “bowl” to hold soup also using the hollow of a bamboo plant sliced vertically into two. 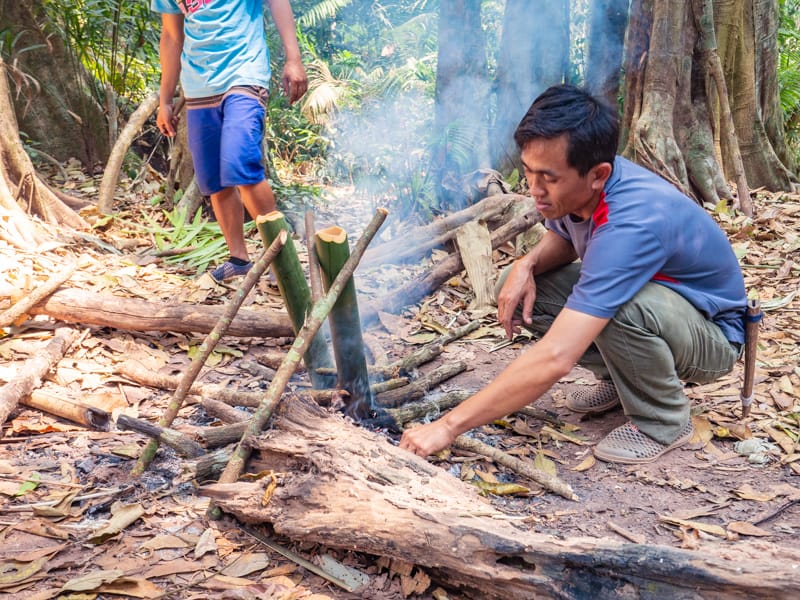 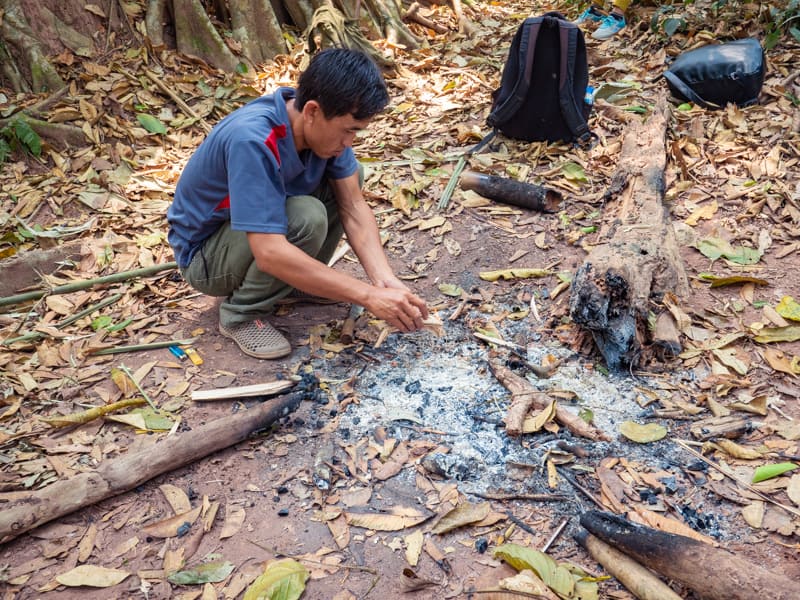 The last time I experienced jungle cooking was in Khao Sok National Park when I stayed at Anurak Community Lodge. I found the whole nature living something we first-world descendants should really experience as it teaches us to appreciate what we have. Instead of fussing around that the utensils being served to you at restaurants are not clean or how the food is served too late or too cold, we should give thanks for having food on the table.

Along with our lunch, there would be the occasional falling leaf or visiting ant, but mostly, we were grateful for having our bellies filled and our energies recharged for the rest of the hiking in the afternoon.

6. Eating with your fingers. 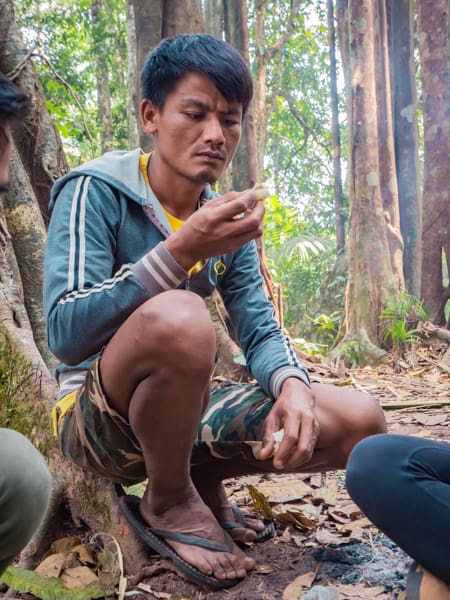 This is definitely a new cultural practice for me. If eating with your hands is unthinkable to you (well I was definitely not used to it), you better get used to it here in Luang Namtha. What makes it easier is that the traditional staple food in this region of Laos is sticky rice. We are given a ball of rice, and you simply pluck out a mouthful of rice and pair it with the dishes.

Which brings me to another first world problem… 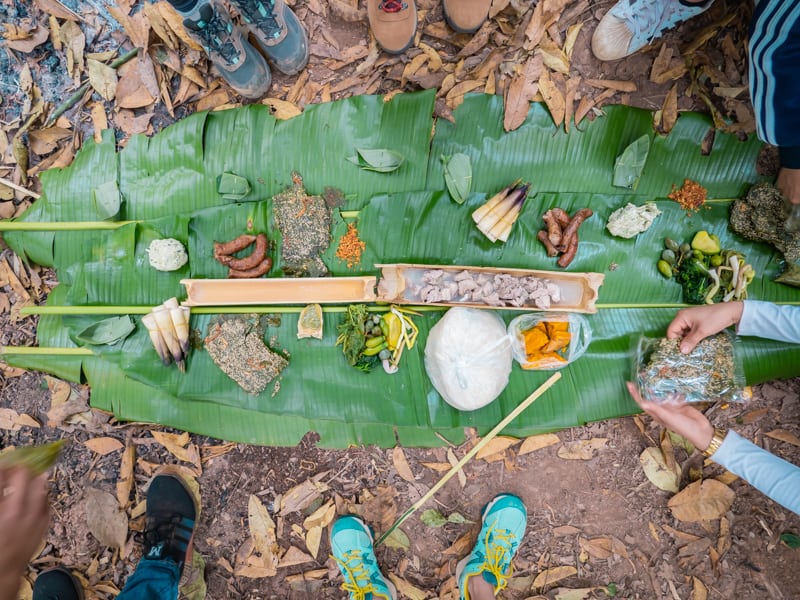 Making a “table” out of banana leaves

Having oily fingers makes me uncomfortable. I like to think that I’m unlike the entitled. I’m alright with living with discomfort (for awhile). I have no qualms about having to pee in wild bushes (maybe a little). But oily fingers…hmm nope. 😄 It’s not something I can’t overcome though. The solution is bringing along wet wipes or hand sanitiser!

Which I mentioned as part of my video on what to pack for Laos:

8. Using fans made from banana leaf.

Apart from using banana leaves as placemats for putting food on top of it while eating from the ground, our humorous guides noticed us fanning ourselves so much during the hike that he cut off another gigantic banana leaf and made fans out of it!

9. Eating plants right off the bat.

Along the way on our Nam Ha trek, our guides would stop and share with us about the different types of edible and non-edible plants. Some are good for its healing properties. Others are used in dyeing. They would prompt us to try them (if edible). One of the most common form of plant eaten in Laos is the rattan, a taste I found myself getting used to. Young rattan shoots are often eaten raw, or used to make soup.

10. Relying on the moon’s beam for light

Nam La village is a village that relies on solar power and zero service connection. You’ll see households having open fires to cook their dinners before the sun’s out. Come night, you’ll see either fireplaces or the occasional torches. Getting from the wash basin to brush our teeth to our homestay, we had to rely on the moon’s beam. 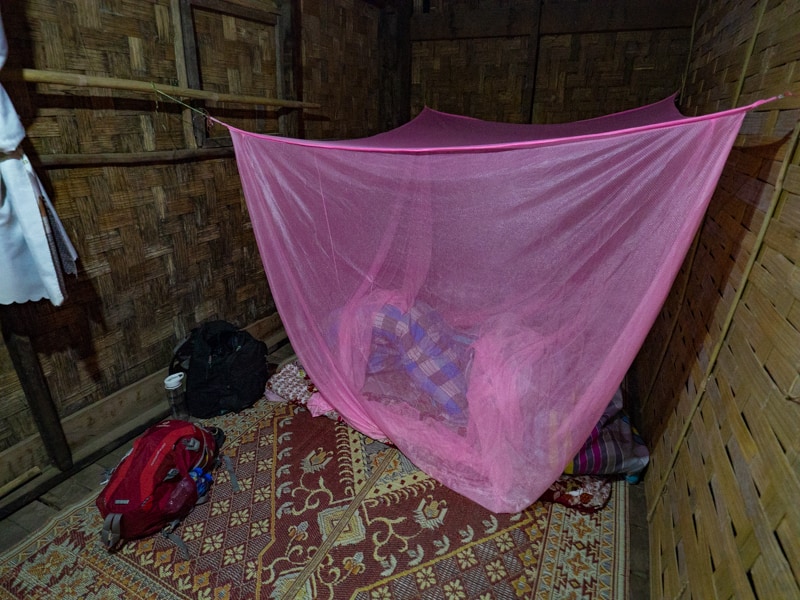 Our sleeping quarters, lit only by a bulb.

We were very privileged to have a small bulb to light up our sleeping quarters. I wonder how the rest of the households got by without light! Maybe they’d memorised the number of steps it takes to get out of their house.

11. Their craftsmanship is deft.

Almost everything is made by hand – from the crossbows used for hunting to the making of whiskey and noodles. We watched as a guide passes time by carving on a bamboo shoot with his knife. We watched old ladies pound rice by hand effortlessly (when in actual fact it required immense effort – we tried!).

12. You can have a shot at hunting or farming. 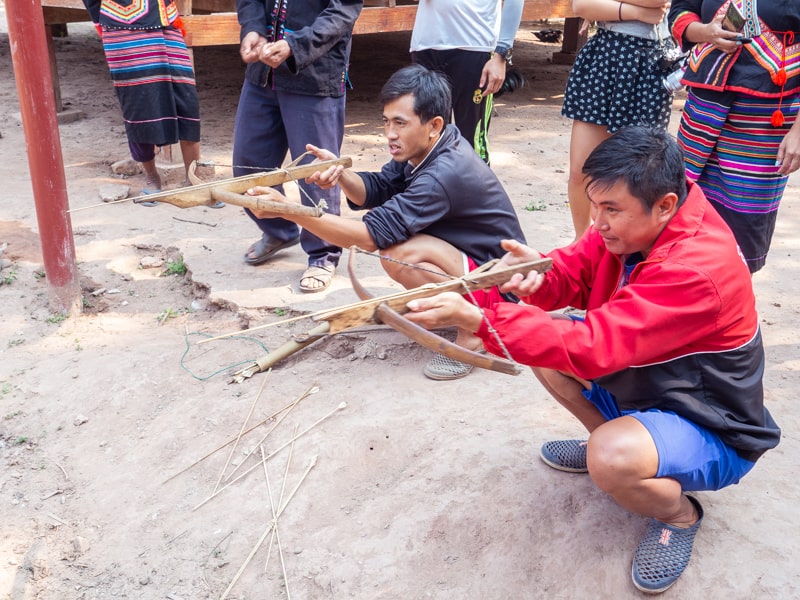 By that, I mean shooting with the crossbows at the bullseye markers made out of cardboard. How else do you think they hunt for birds and fish?

There is no point in having clean feet because the sand gets stuck on them the moment you step out of water. Sometimes I think you might be better off walking barefoot.

Have you ever experienced living primitively? What are your thoughts about it?

Read other useful posts about Laos!

Special thanks to Luang Namtha Tourism for this experience! All opinions remain my own.