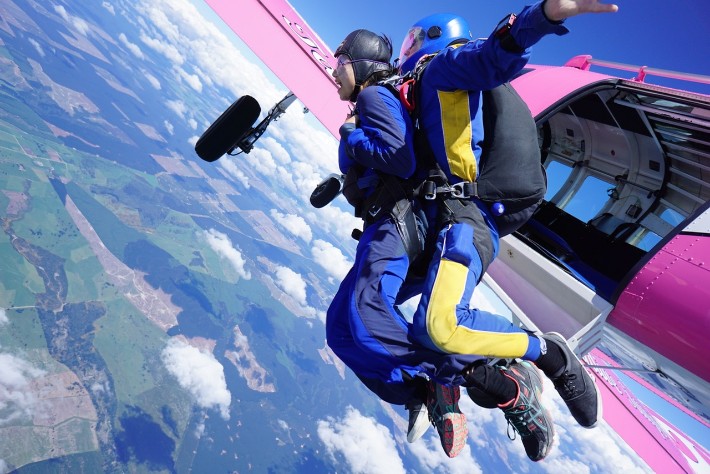 What Exactly Happens When You’re Skydiving at 15,000 Ft in Taupo, New Zealand?

Home » What Exactly Happens When You’re Skydiving at 15,000 Ft in Taupo, New Zealand?

On my first visit to New Zealand in May 2016, I was filled with anticipation as I was about to tick off my first adrenaline-pumping skydiving experience in the adventure country of New Zealand.

As luck (and the weather) would have it, we failed to do it time and again due to the poor, cloudy weather of May, the beginning of winter.

Fast forward to the end of 2017, I had this valuable opportunity to come back again thanks to a partnership with Tourism New Zealand to promote the Queenstown International Marathon. In the heat of the summer in November 2017, I knew I had to tick this bucketlist of one way or another.

I had made use of the beautiful warm weather in November and December to travel across the entire country, starting from Queenstown. Covering places I haven’t been since my last trip in May, we covered the South and East of the South island, and then moving on to the centre of the North Island.

When I found out Taupo had some serious skydiving available, you bet I hopped right into it.

Bless the clear, sunny skies that day, I was picked up by their hot pink limousine right at my doorstep of my Airbnb. In the car, there were already a couple other people – young, fresh blood, all doing skydiving for the first time. The air was palpitating with fear and excitement. 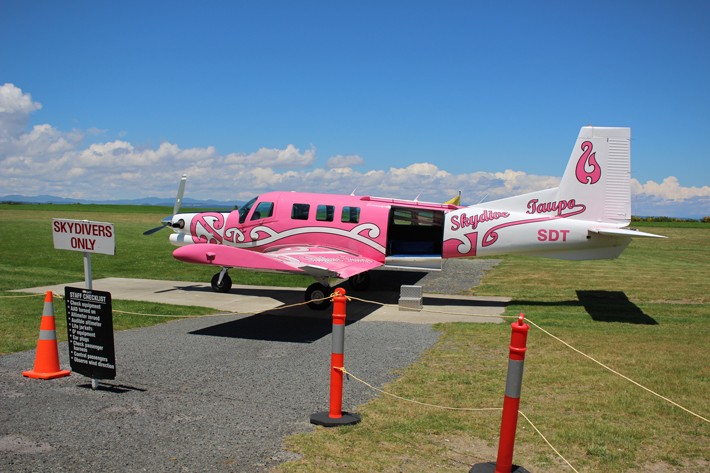 After arriving at the dropzone, we quickly filled in our information, sat down to listen to a safety briefing, and made our decision on how high we wanted to fly.

Seeing that I didn’t know when I would get another extreme experience of this sort, I went full on with the 15,000 feet option with the Freefall package – photos and video included (NZD 559) from a third-party point of view. That means I had another skydiver cameraman following me around and taking photos and video of me doing the whole jump from start to end! 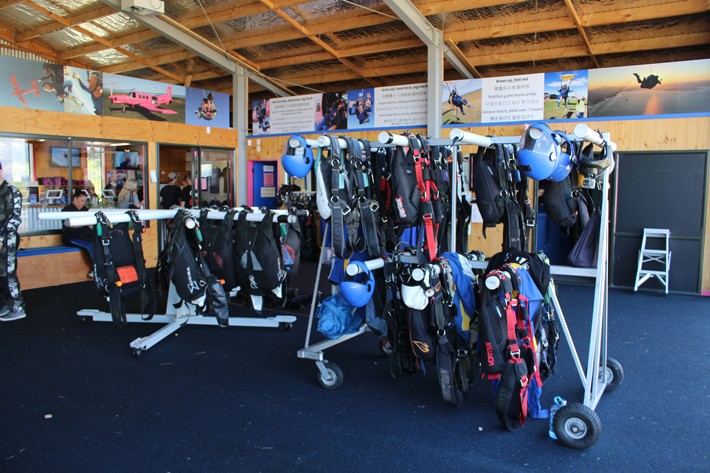 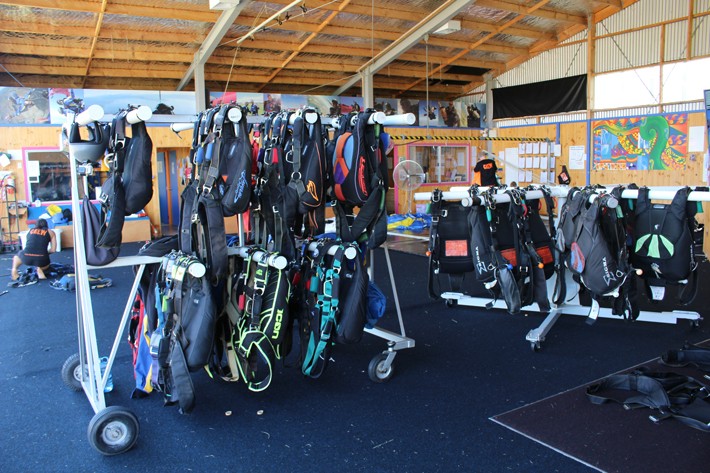 Because of the large crowd of people coming and going all the time, I didn’t find the service too friendly or warm. For that reason though, the staff went about their jobs pretty smoothly and routinely.

After locking our belongings in the provided lockers, we proceeded to equip ourselves with the jumpsuit, harness, hat and goggles. We were introduced to our tandem skydiver, and I had big, burly, handsome Dan to be strapped on behind me and Mike to be my appointed cameraman.

From the point where we got up the plane, everything else happened in a flash as I tried to take it all in.

I was the first to enter – which means the last to jump. There were at least 7 jumpers loaded per plane ride in two rows, and with some extra cameramen on the plane, the plane sure was a cosy squeeze. It was a thigh-to-thigh seating arrangement. There wasn’t space to move at all, but I took in as much of the aerial view as I could in the 20-minute flight as we climbed up the altitude. At one point the straps to my skydiver got so tight and fitting that I was literally sitting on his thigh.

Periodically checking Dan’s watch which shows the altitude, I mustered as much courage as I could as they started fitting us with oxygen masks at the halfway mark.

There was only about 10 seconds between each drop, and there was barely time to think about what was happening! Everything was directed by the skydivers, and all I had to do was basically lay limp as Dan dragged me to the entrance, started rocking back and forth, and jumped off the plane. Mike, my cameraman, was lingering at the edge of the plane, capturing us as as we jumped off.

At 200km/h, the only feeling I felt right there and then was the immense impact of the wind hitting against my face, and I probably look all contorted in my facial expressions as I was in the air.

It felt like forever that I was free falling (it was actually just 60 seconds), before Dan pulled the parachute out and there was a sudden halt in the drop and my legs bounced right up by the sudden change in speed. It was at 5,000 feet when the parachute opened. 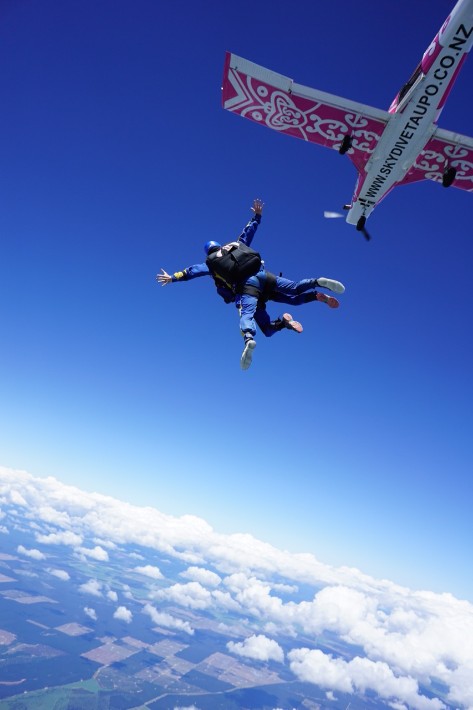 Dan taught me to toggle the parachute to steer left and right, and he did some 360-degree spins while we were still in the air. The entire experience surely was brief, with only 5 minutes of air time, but it sure was intense and exhilarating!

I’d done free fall bungy jumping in 2012, and I can say, the free fall from skydiving is less scary than bungy jumping, since the actual jumping from the plane does not involve you personally stepping off the ledge, and you know you’re in safe hands when you’ve got the professionals right behind you. The wind also buffers against the speed of the drop (whether this is psychological or not, I can’t be sure).

It had been a busy period in the time I went. The moment we landed, I didn’t really get to have much of a conversation with them before they were soon off on another new jumping assignment. I queued to collect my finisher shirt and was soon escorted back to my place in the same outlandish pink limousine.

The video below perfectly sums up my first skydiving experience, a memory to remember!

The video sure captured every essential moment, from the point where we boarded the plane to the split second where we jumped off the plane and landing back on ground.

Since they didn’t have a shortened video version that I could put up on Instagram, I’ve shortened it myself so you can watch it on Instagram here!

Sure, there are more exciting things to do around Taupo, but this skydiving experience will totally be your highlight on your visit to Taupo!

Special thanks to Skydive Taupo for making this experience possible! All opinions remain my own.

Want more New Zealand stories? Subscribe and be in the loop!