How to Record Silky Smooth Video For Your Travel Vlog

Unless you’re filming the next Blair Witch Project or Cloverfield, there’s really no excuse for excessive camera shake in your videos. Recording smooth clips not only adds a touch of professionalism but also helps the viewer to follow the action and keep up with what’s going on. So, if you’re serious about your vlog, you need to take some measures to minimise camera shake.

Now when you’re recording at home in a controlled environment, smooth footage is easy to achieve. However, as a travel vlogger, your most exciting videos will inevitably be the ones taken when you’re out and about exploring new places. Be it a stroll through the bustling city of New York or a ride in the back of a moto-taxi in Peru, filming on the move outdoors makes it challenging to keep your camera steady.

Fortunately, with the right equipment, skills, and a bit of help from some very smart software, you can achieve silky smooth video in even the toughest of situations. Let’s go ahead and discuss them right now. 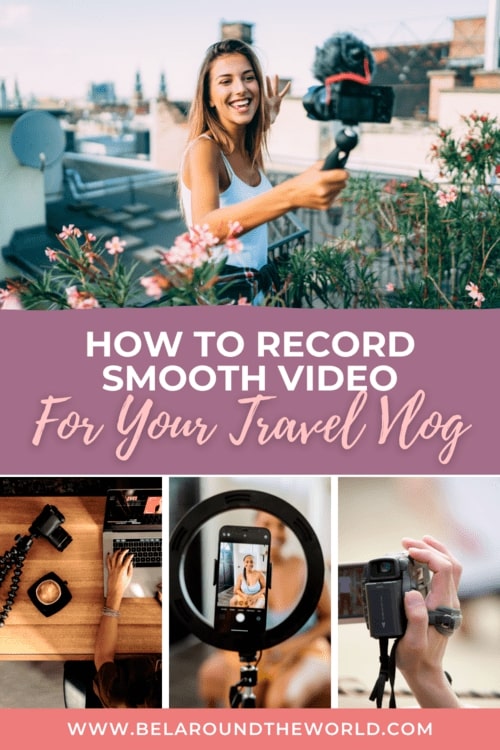 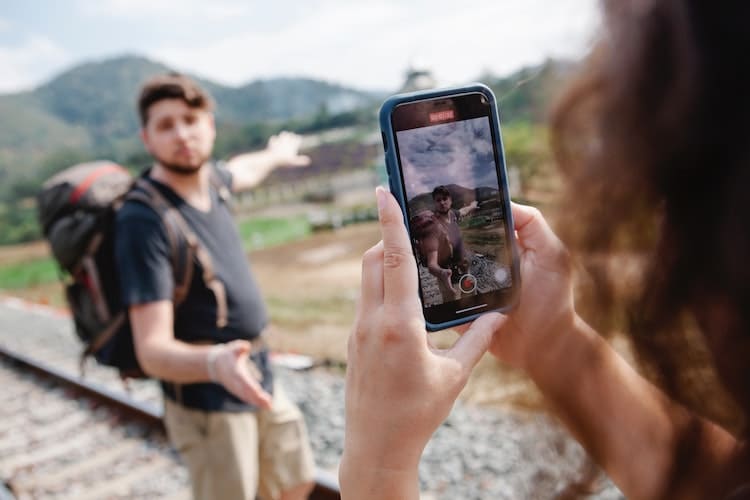 When you’re buying a new camera for your vlog, your attention is easily drawn to things like the maximum video resolution, frame rate and performance in low light.

Optical image stabilisation is where the lens or sensor physically moves to compensate for any camera shake and jitter.

Electronic image stabilization, on the other hand, is a software-based approach that works in real-time by intelligently cropping out a more stable video from what’s being recorded.

Most premium smartphones, action cameras, and mirrorless cameras will have some form of image stabilisation built-in these days. Unfortunately, it is difficult to know how good it is until it’s in your hands. That’s why it pays dividends to do your research beforehand and review footage taken by others when deciding on a camera to take on your travels.

In the world of smartphones, it is no surprise that the latest offerings from Apple, Samsung and Google capture the smoothest video. If you’re looking to take your video to the next level, the Fujifilm XT-4 or more affordable Panasonic GX9 are great options. Finally, for the most adventurous trips, it’s difficult to beat the GoPro HERO10 Black which uses the latest iteration of GoPro’s HyperSmooth electronic image stabilisation technology.

The Gimbal: A Must-Have Camera Accessory

While cameras have come a long way, their built-in solutions are still far from perfect. As soon as you start walking briskly or pivoting on the spot, things can go awry. Even the steadiest of hands won’t be able to guarantee smooth footage.

That’s why many vloggers are packing gimbals in their shooting kits today. This clever accessory essentially cradles your camera and keeps it still by producing movements in the opposite direction of any shaking. Three individual motors in every axis create these countermovements, which is why a more accurate term for them is ‘3-axis gimbal stabiliser’.

Gimbals allow you to produce much more stable footage than using a camera alone. However, keep in mind that they can be quite heavy and take up a good chunk of space in your bag. They also have a battery that needs to be charged and attaching or detaching your camera can be a fiddly process, so they’re not something you will necessarily want to be filming with at all times.

You can find gimbals for most devices, including smartphones, GoPros and DSLRs or mirrorless cameras. You need to make sure the gimbal can accommodate the size and weight of your camera, and generally want to go for one that is comfortable to hold and easy to mount your recording device onto.

If you want to drastically improve the videos you record with your smartphone, the DJI OM5 gimbal is highly recommended because of its magnetic clamp which makes mounting and unmounting a total breeze. Alternatively, if you just want one piece of equipment to do it all, the DJI Pocket 2 is a great camera-and-gimbal that feels like it was made for travel vlogging.

A gimbal isn’t the only tool at your disposal for steadying your camera. A versatile camera tripod is highly recommended for stationary shots because it’ll always steady your camera better than holding up the camera with your bare hands.

While you can sometimes find flat surfaces to rest your camera on, they’re not always perfectly level with the horizon. The legs of a tripod can be shortened or lengthened individually, making it possible to straighten things out regardless of the surface.

Another useful accessory is a handheld stabiliser. These can take the shape of a stick or a ring and are much more comfortable to grip than simply holding the camera. Some of them feature weights and moving parts that can compensate for unwanted movements. They’ve become a bit unfashionable since gimbals became mainstream, but they’re an especially good alternative to mirrorless or DSLR camera gimbals which are often prohibitively expensive or heavy to carry.

Having a good camera and accessories like a gimbal or handheld stabiliser will dramatically improve your shots, but they’re only part of the equation. There’s a big human element in the quest for smooth footage, and simply taking your shiny new toys outside and expecting magical results is unrealistic.

The first step is preparation. Before you’ve even left your house or hotel, you need to be thinking about the locations and what kind of scenes you might end up filming during the day. If you’re just going out for a casual walk along the beach for your daily vlog, you might get away with just a camera. But if you’re documenting a journey on a motorboat to a remote island, for example, then you’ll want to bring a gimbal and wear comfortable clothes that don’t restrict mobility.

When it comes to actually recording clips, it’s all about practice. If you’re new to vlogging, the first few takes will feel overwhelming, because you’re simultaneously thinking about how to operate your camera, how to frame the subject, and what’s going on around you.

It’s important to get comfortable shooting video before worrying too much about reducing camera shake.

Once you’re comfortable with your camera, that’s when you can focus on steadying your footage. Aside from keeping your hands and arms steady, it’s vital that panning and tilting movements are performed smoothly with no sudden movements. You also need to start moving like a stealthy ninja, taking delicate steps and no excessive bobbing. Over time, your muscles will strengthen and your body will naturally adjust to keep the camera steady.

The most important point to say here is that you don’t want to leave this to the last minute. You should spend some time recording meaningless things at home and outdoors for the sole purpose of training your technique.

There will inevitably be times when you end up with shaky footage that doesn’t make the cut. Maybe it was a spontaneous act where you had no time to set things up or maybe you simply forgot to bring the right gear. In such cases, there is fortunately still the potential to salvage what you’ve got.

Most video editing software has some stabilisation tools that work in a similar way to a camera with electronic image stabilisation, i.e. intelligently cropping out steady video from the original recording.

In Adobe Premiere Pro, for example, this is achieved using the “warp stabilizer effect”. Other popular video editors like Final Cut Pro and DaVinci Resolve have similar tools.

Just remember that you don’t want to depend on post-production methods for steadying most of your videos. It makes your workflow less efficient and crops out some of the picture, so you won’t know what you will end up with until you’re at your computer. Think of it a last resort that can be used if the original source material isn’t up to par.

With so many tools at your disposal, it isn’t hard to achieve silky smooth footage that’ll wow your audience. But when you’re filming your travels, you will always encounter less than ideal conditions which make shake and jitter unavoidable.

However, a little bit of natural movement can increase the sense of immersion and add a bit of authenticity. So your goal shouldn’t necessarily be to always end up with perfectly steady recordings, but rather produce something where camera shake becomes distracting.

With some investment into the right gear and enough practice, producing smooth and professional-looking videos for your vlog will become second nature.

Pin this for later: 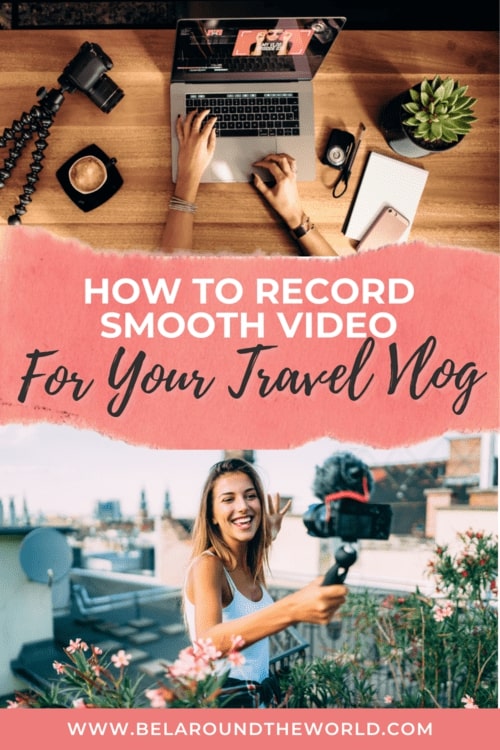 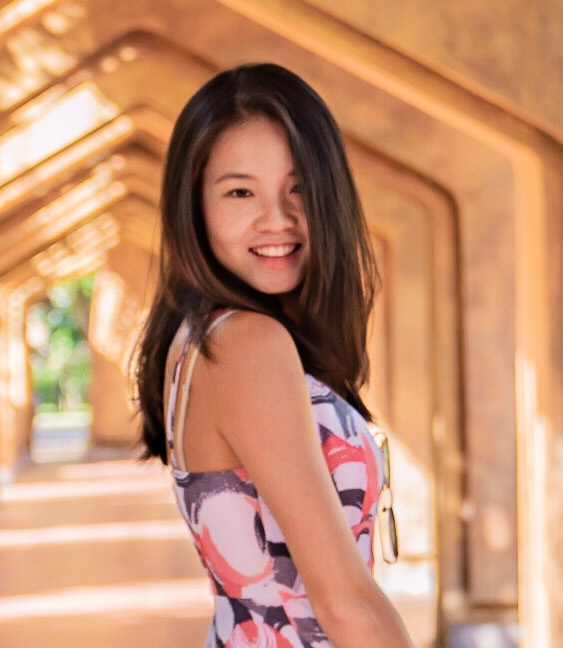 Hi! I'm Isabel, a full-time traveller and digital nomad. Pulling from my own world travel adventures and lessons, I share my tried and tested travel tips, so that I can get YOU to take action and fulfil your travel dreams! :)

© 2022 Bel Around The World. All Rights Reserved. Website design by Hello Pomelo.