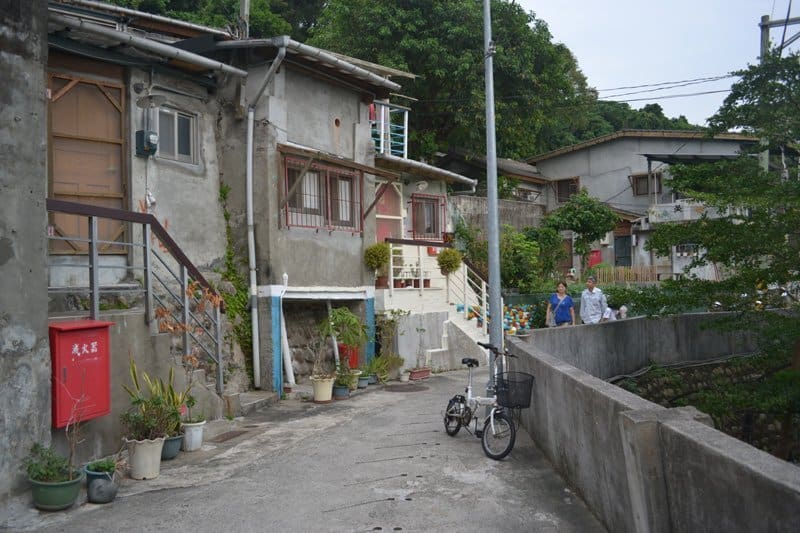 These 7 Things To Do in Taiwan Will Make You Drool

By Isabel Leong 10 November 2019 No Comments

Taiwan is known for its dynamic economy and record-breaking skyscrapers. But it’s also hugely underrated as an Asian travel destination that offers a rich culture and an incredible food scene.Despite its convenience stores and towering apartment blocks, Taiwan hasn’t shed its traditions amid the modernity.

In its capital Taipei, the city’s eclectic cityscape includes ornate temples squeezed into narrow side streets and night markets with delectable street food.

Here are the experiences you shouldn’t miss.

7 Things to do in Taiwan to complete your Taiwanese experience! 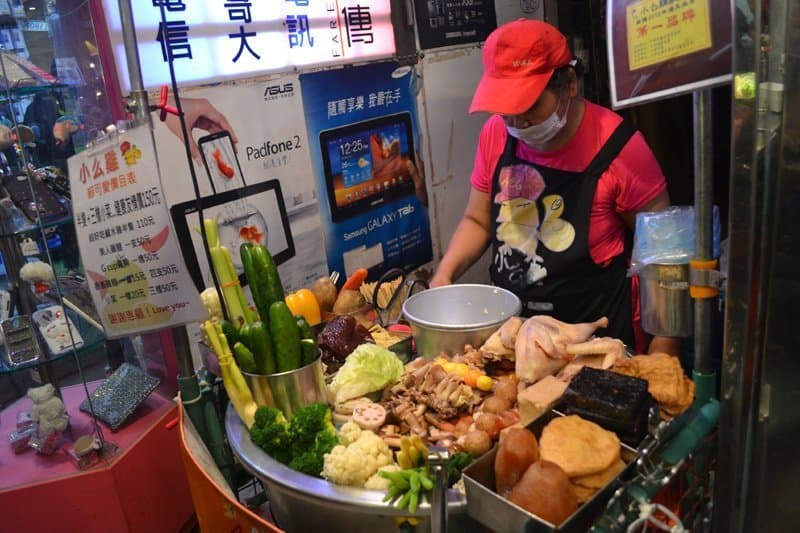 Taipei is famous for its bustling nigh markets and there are over a hundred of them scattered throughout the country. They’ve played a vital part in the city’s nightlife for thousands of years – and they’re just as vibrant today.

The night markets are packed with stalls full of Taiwanese specialties such as stinky tofu, which gets its odour from its fermentation in a brine mix.

There’s also bubble tea in endless varieties and flavours, which was invented in Taiwan, and tiny shops full of household items, racks packed with the latest fast fashion trends and cute candies and toys printed with colourful anime characters.

There are a few very famous night markets in Taipei that are packed every night, but I love the less touristy (yet still very lively) Tonghua (Linjiang) Night Market. It’s a short walk from Taipei 101, which means it’s a great spot for dinner when you’re sightseeing in downtown.

My favourite food is the sugar cane juice, served hot with a generous dash of ginger, and the perfectly-seasoned fish patties sold on a stick.

Night markets, if you’ve never experienced them in Asia, are a feast and an inside look into the locals’ daily lives.

I’d recommend at least a couple of hours of browsing. Though if you’re a vegetarian, things can get tricky – many of the cooks don’t speak much English so I’d recommend sticking to foods you know.

As mentioned before as part of some of the spots in Taipei you’ll obsess over, this trendy district is packed with fashionable boutiques, mega cinemas, hip cafes and colourful pubs – always buzzing at night with young people shopping and street vendors selling oyster omelettes or bite-sized baggies of tropical fruit.

Known as “little Tokyo,” the Ximending district is a neon-light homage to Japanophilia and a paradise for anime or Hello Kitty fans. Tiny alleys are lit up with lanterns or packed with street art while giant posters of scantily-clad anime characters hand in shop windows. 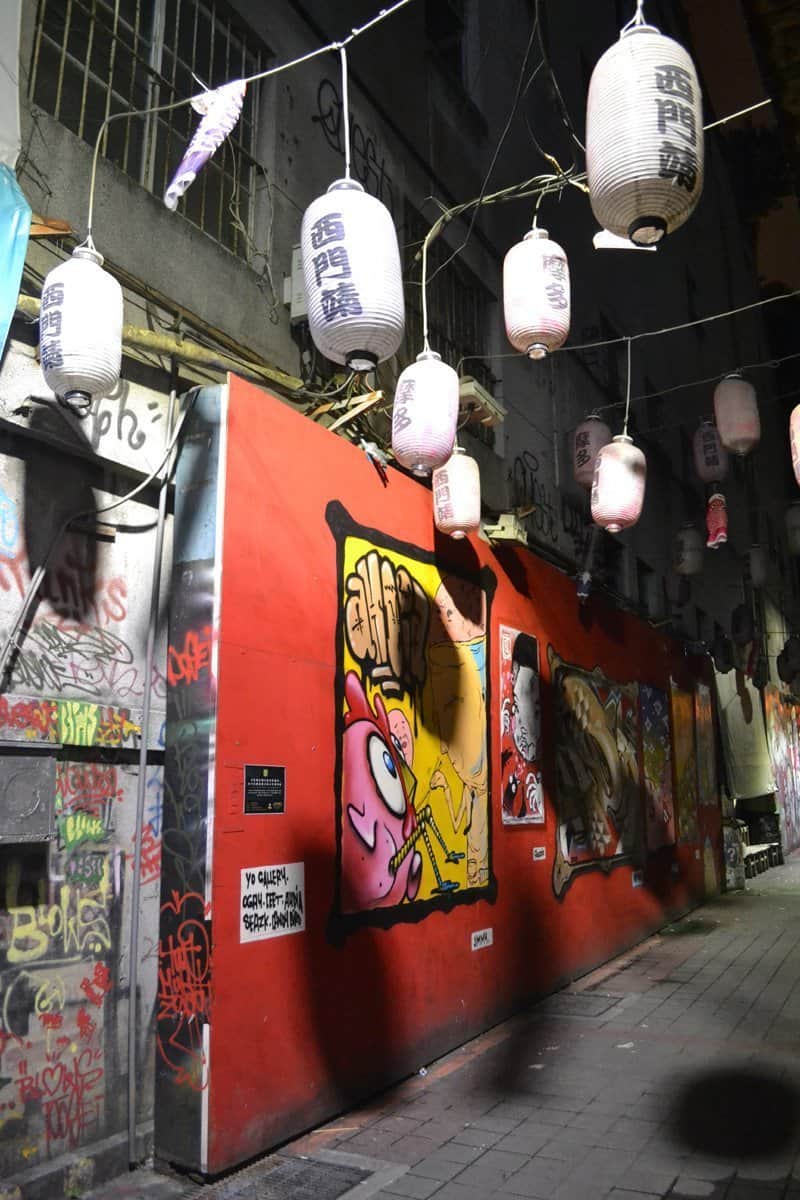 There are also tiny temples to explore, like the Jin De Temple at the end of Cinema Street that’s one of the district’s historical gems. Dedicated to the Taoist deity General Zhushun, it’s filled with gods and heroes and topped with a roof swelling with ornate carvings and bright flowers.

Ximending is also a very safe and well-lit district that I’d recommend staying at for female or solo travellers who aren’t familiar with Taiwan. It boasts many upscale hotels and hip boutique hotels as well. When I wandered alone at night, I always felt safe and most of the streets were still vibrant with nightlife.

The Taiwan Design Museum inside Songshan Cultural and Creative Park is a fascinating look at creative Taiwanese and international design.

You can admire the original French Chanel no. 5 bottle, a series of Taiwanese bicycles, or a set of 1990 Taiwanese blades forged from bomb shells all in one place.

If you’re a history or design buff, then plan for at least a few hours of browsing. Set in a former tobacco factory that was set up during Japanese rule, the museum includes great collections of furniture, household items and incredible designs that blend creativity with function. 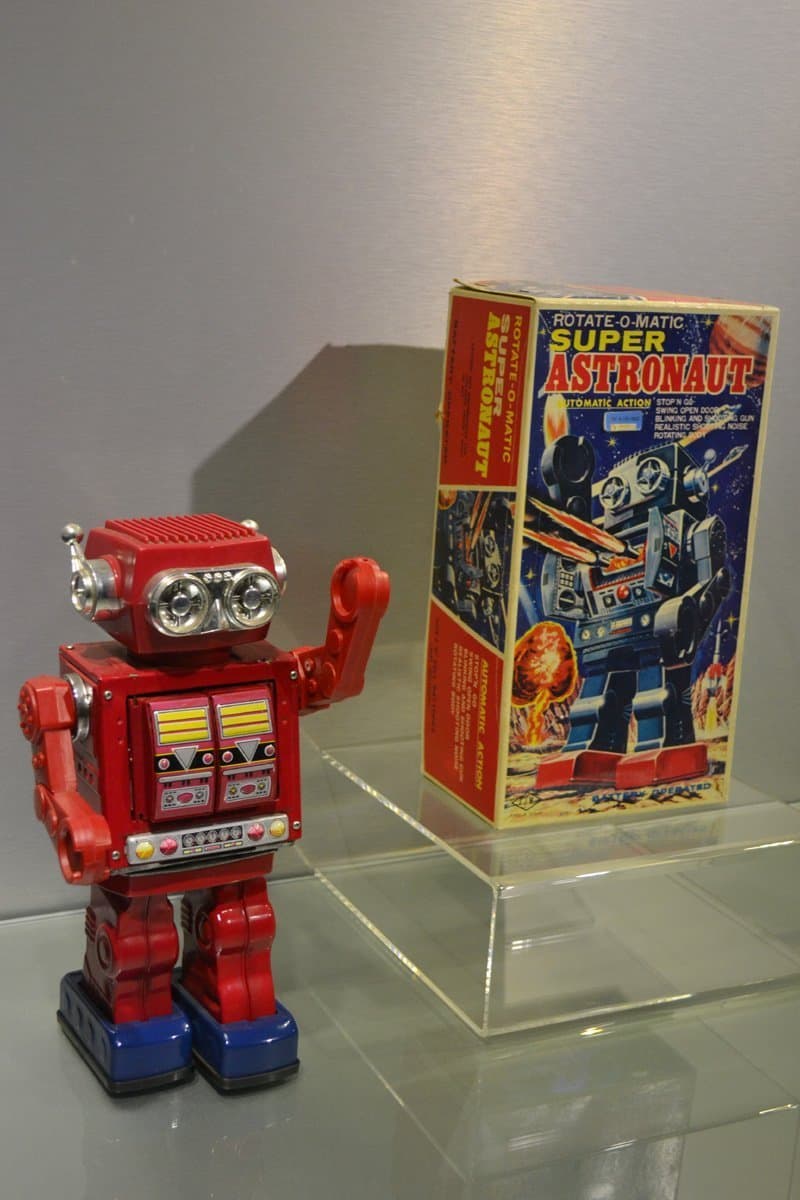 Also, don’t miss the Song Yan Gallery at this creative park either. It’s a beautiful shop filled with quirky and fun designs and makes a great spot to pick up some adorable rolls of washi tape or cute pencil cases.

The park is perfect for a sunny afternoon with its gardens and cafes, and it’s worth checking ahead because there are often festivals or performances happening.

Called the “creative hub of Taipei,” the park often serves as a venue for fashion shows, seminars and short-term exhibits. There are also occasional fun events for children.

These clusters of grey houses perched along a hillside are a fascinating maze of passageways and staircases leading to adorable cafes or artists’ open studios.

The Treasure Hill Artist Village is a former air raid shelter that’s been transformed into a creative community full of boutiques and galleries. Can you believe, it was once filled with squatters and war veterans escaping mainland China?!

Today, it’s become an eco-friendly art village that occasionally hosts farmers markets and music events. It has reopened as an artist village in 2010 and draws in visitors with colourful murals and decorations.

I’d recommend a couple hours for browsing and walking around, though you should prepare to do plenty of stair-climbing. 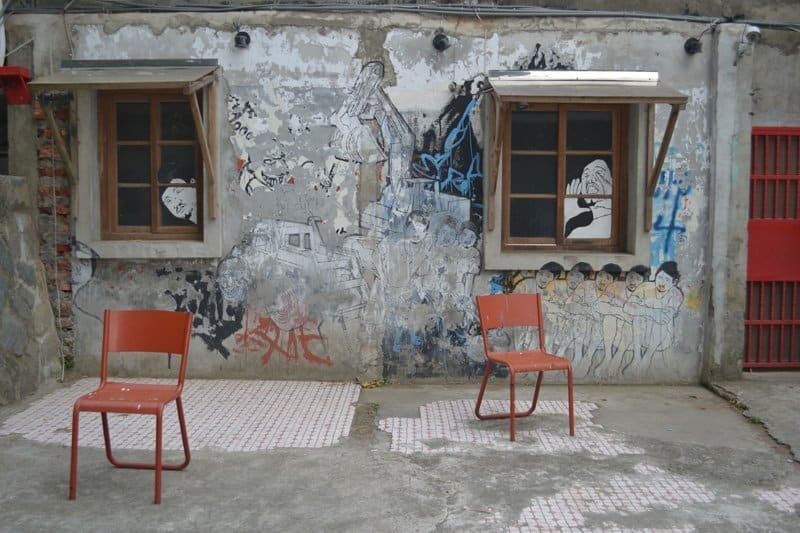 The village currently has 14 studios, though keep in mind that artists live and work here and not everything is open to the public.

The village aims to work on historical community preservation, and it also runs the Attic Treasure Hill Traveler’s Hostel if you want to stay awhile and get immersed in the community. There’s an artist-in-residence program as well.

The Treasure Hill Artist Village hosts events including exhibits and talks that are worth checking ahead on their website. 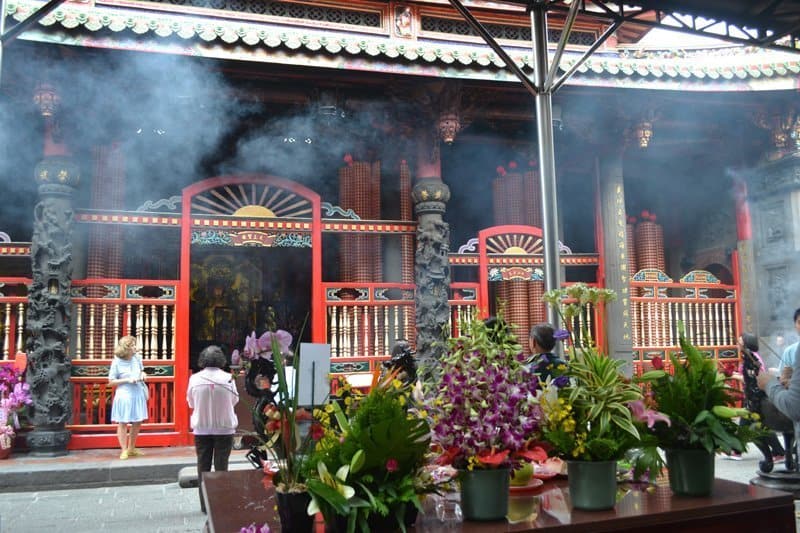 This gorgeous temple was built in 1738 by settlers from mainland China, and contains both Buddhist elements and alters to Chinese deities.

One of the city’s most famous temples, it’s fragrant with incense and filled with vases of purple orchids.

Most Taiwanese practice a mix of Buddhism and Taoism, along with various folk beliefs, and this temple is testament to that diverse mix. Longshan was built as a Buddhist temple that later added Taoism deities. It now contains more than 100 gods and goddesses.

It’s a vibrant and busy temple but yet doesn’t feel overcrowded. Nestled in one of Taipei’s most historic neighbourhoods, it’s still full of young people and urbanites taking a few minutes out of their day to pay their respects at the alters.

There’s something otherworldly about watching thick incense smoke rise past the ornate roofing and out past the modern and tall buildings surrounding this architectural treasure. It’s a spiritual place that’s also grounded in the everyday reality of the city.

There’s a small shop where you can buy some gorgeous-smelling incense, bracelets or other mementos from the temple.

Since it’s one of the city’s best-known temples, come early if you want to avoid the crowds. 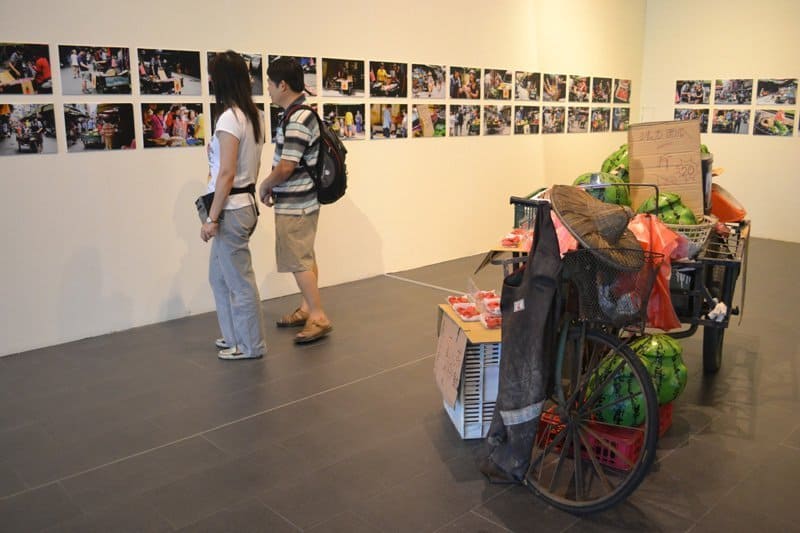 The National Taiwan Museum of Fine Arts is one of Asia’s largest with 102,000 square meters of diverse collections from traditional to contemporary.

If you’re an art lover, I’d recommend at least a few hours exploring the permanent collection. Pieces like Daniel Lee’s Nightlife, an imitation of The Last Supper but set in a seedy nightclub, are striking and worth a second look.

Established in 1988, the museum remains the only national-grade fine arts museum in the country and has an unsurpassed collection of modern and contemporary Taiwanese art that’s an invaluable insight into the country’s culture.

There’s also a vast outdoor sculpture park and a branch of the Chun Shui Tang teahouse on the grounds, which make for plenty of space to rest your legs between exhibits.

I found the collections impressive, and a perfect blend of traditional pieces like Chinese brush paintings and more quirky avant-garde art and surreal sculptures. 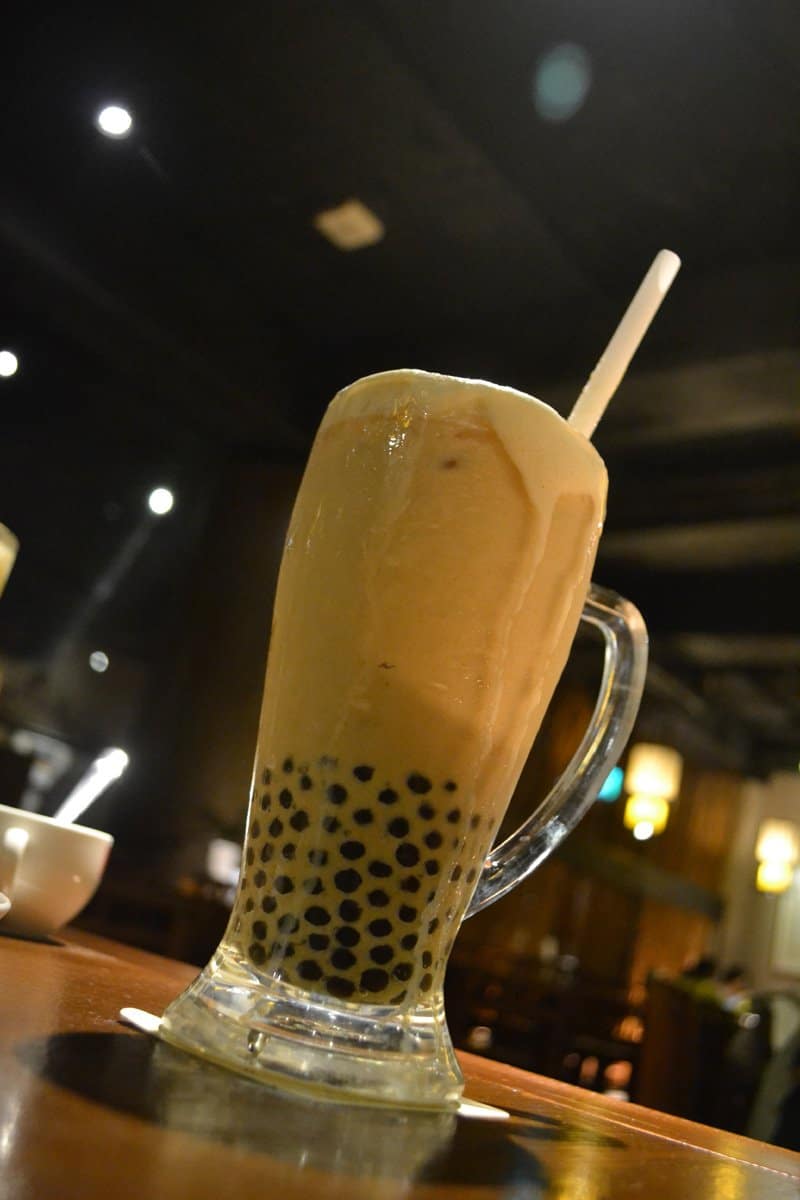 The drink that’s now so popular worldwide was invented in a humble tearoom in Taichung. It has now grown into an iconic franchise and a household name for itself.

The Chun Shui Tang teahouse are the claimed originators of the famous bubble tea (or boba tea as the Westerners call it), and they serve it up in dozens of varieties at locations all around Taiwan.

I’d recommend their location inside the National Taiwan Museum of Fine Art, whether you prefer a more minimalist setting or their dimly-lit and cosy tables. It truly is a strikingly gorgeous spot.

The bubbles in the drink are tapioca balls that naturally sink to the bottom and are then sipped up through a straw. It’s said the tapioca balls were added after a boring meeting in 1988 where the teahouse’s product development manager poured her dessert into her tea.

The drink has since soared in popularity, and it’s worth making a stop at this location for a refreshing rest after a few hours inside the art museum.

Taiwan is an ultra-modern nation, but it also boasts a rich blend of cultures and incredible food that makes it an underrated gem for travellers.

You can visit centuries-old temples and explore vibrant night markets, then a few minutes later relax with a latte inside a convenience store.

Taiwan’s seamless blend of history and modernity makes it ideal for an exciting and hassle-free destination. 🙂 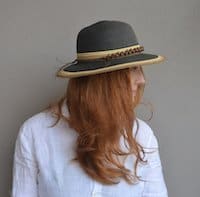 Dee Nowak is a travel writer and photographer living as an expat in Cairo, Egypt. She loves slow travel and exploring off the beaten path. She’s also a minimalist who writes about how to slow down while living in a big city.

Things To Do in Taipei, Taiwan That You’ll Obsess Over

This 5-day Taiwan Itinerary Is Everything You Need

These 7 Things To Do in Taiwan Will Make You Drool