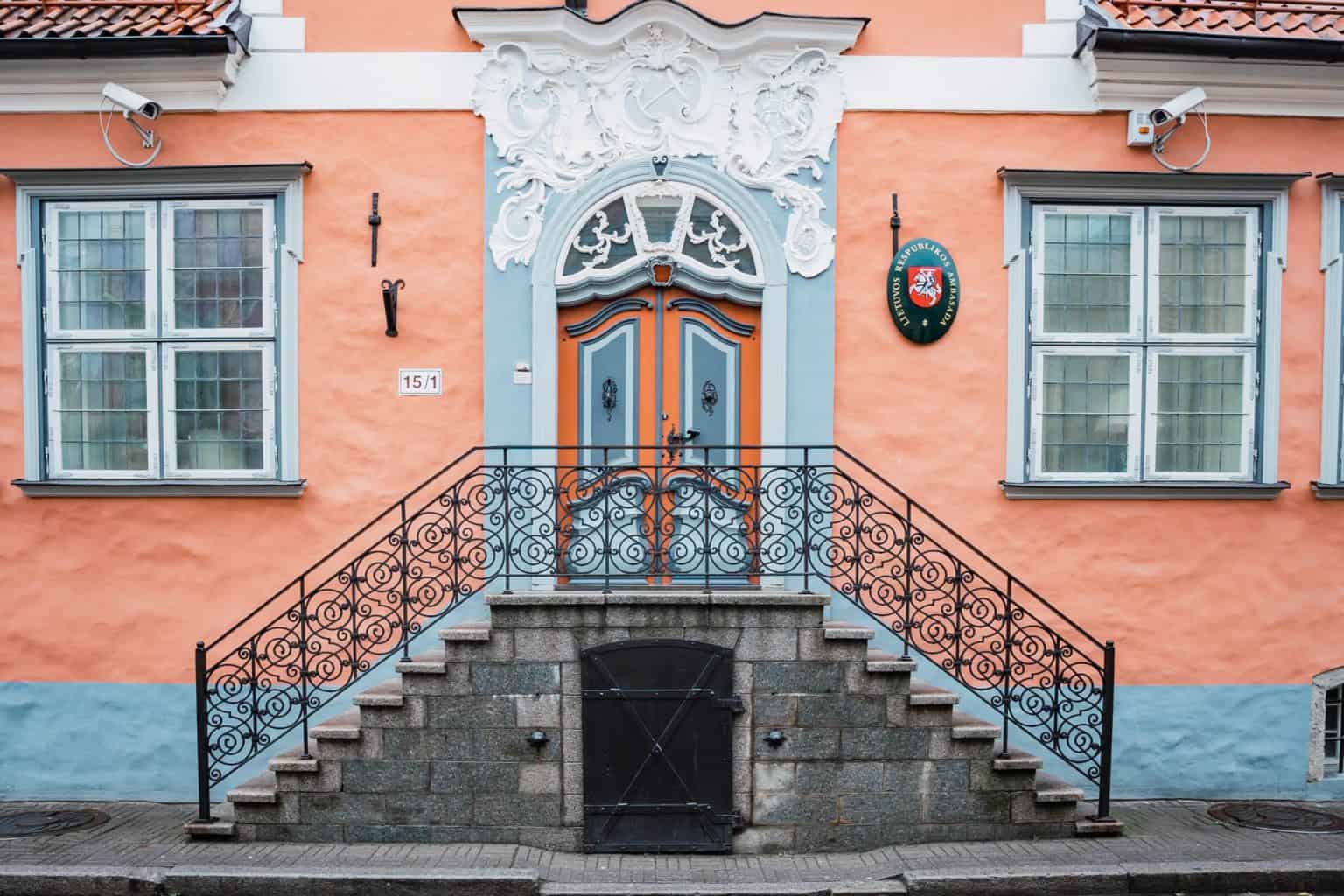 All The Colourful Things To Do in Tallinn, Estonia!

Home » All The Colourful Things To Do in Tallinn, Estonia!

There are a ton of things to do in Estonia. One city you won’t miss out is the capital of Tallinn, born at a crossroads of medieval trade and is now a treasure of the Baltic. Estonia’s capital combines ease of travel with cultural richness, culminating in a destination delighting travellers from all over the world of all tastes.

Here, you can find hipster hotspots splashed with historic and cultural treasures from the Medieval era to its Soviet occupation amongst some of the 450,000 that make Tallinn their home today.

This guide hopes to inform you on what to do in Tallinn, Estonia. Hopefully after consulting this, you’ll get a better idea of what to see in Tallinn and some of things to do here!

Partially due to it being a historied and super-old city, much of Tallinn is super compact, with the major areas of the airport, Old Town, port and major tourist attractions all being within walking distance, or a 15 minute drive.

Today, Tallinn is home to over 450,000 residents. At the centre of the city is the historic hill of Toompea, which is circled by the city wall. This wall also helps separate the city into Old Tallinn and New Tallinn.

Things to do in Tallinn, Estonia

Dating as far back as the 13th century, the old section of Tallinn is perfectly preserved, and contains a treasure trove of secret spots and attractions that can keep you occupied during your stay.

You can sign up for guided tours with locals that might lend you some extra insight into the many stories that Tallinn has hidden under its exterior. Some of these can be found here:

The good news if you are on a tight budget is that there are free walking tours around Tallinn! This walking tour, guided by local young students, is an alternative to normal sightseeing trips, and is made specially for true travelers.

These are some of the gems you will stumble across as you explore the historied, street art filled walls of the Old Town. Make sure to grab some craft beers and local foods at any of the eateries dotting the streets if you’re hungry during your explorations!

As a medieval market and a modern meeting place, Town Hall Square has been the heart of city life for centuries. Goods from around the world came in through the port and were traded on the market here.

The jewel of the Old Town would have to be no other than the Town Hall (Raekoda), which served as the centre of civic rule from the Middle Ages to the modern day. This dominating stone structure has been refurbished to become the Tallinn City Museum, that traces on the history of this city from inception to contemporary times.

One of the prettiest littlest walkways in all of Old Town, the medieval St. Catherine’s passage connects Vene and Müürivahe streets. On the northern passage you can find what’s left of St. Catherine’s Church (hence the passage name) and various large, ancient tombstones that used to line the inside of the sanctuary.

On the southern portion of the passage, you’ll find numerous artisan workshops, where you’ll get to catch artisans hard at work creating new items.

Films and hands-on displays at this extensive museum covers Estonia’s history from prehistoric times’ right up to the end of the 20th century, showing how Estonians lived.

It makes its home in the 15th century Great Guild Hall, itself a splendid relic of Tallinn’s historied past. You’ll definitely be impressed at this gabled, hulking hall with its magnificent lion’s head door knockers, giant porch and vaulting ceilings.

Museum entrance is free with Tallinn Card, so do make the most of out it!

One of the oldest continuously running pharmacies in Europe (almost 600 years old now!), no one really knows exactly when it was opened.

Keeping up with the times, the pharmacy sells the usual aspirin and condoms, but part of the shop is also a museum, displaying old medical instruments and other curiosities. Here in this gabled house, we found ancient pharmacy jars made of wood and ceramic.

The main entrance into Old Town is marked by these twin gate towers, which unfortunately are a shadow of its former glory. Initially part of a larger system of 8 towers that formed the defences of the city, most were torn down to make way for traffic.

Today, the ivy-covered twin towers are a longstanding symbol of the city and its past, with visitors seemingly getting teleported back to the 18th century when they walk past these gates.

2. Take a stroll in Kadriorg Park

Kadriorg Park is possibly the most magnificent urban park in Estonia, spanning over 70 hectares. Its construction began in 1718 by the behest of Russian Tsar Peter I. The park contains design elements from different centuries, but the most popular places for a stroll here are around the Swan Pond and the promenade leading to the president’s palace.

There are quite a few art museums in the proximity of Kadriorg Park, including KUMU Art (the Estonian Modern Art Museum), Kadriorg Art Museum and the Mikkeli Museum, so make sure to come here to catch a breath of fresh air while hopping between the museums!

3. Sail the seas at the Seaplane Harbour (Estonian Maritime Museum)

Seaplane Harbour is the name of the Estonian Maritime Museum, which is arguably one of the most interesting in all of Europe. The historical seaplane hangars here display over 200 artefacts: a real submarine called Lembit, a century-old icebreaker called Suur Tõll, as well as a working Short 184 seaplane.

The Estonian Maritime Museum is certainly a place for the whole family to have fun, with a cinema, children’s playground, simulators and a large aquarium to keep the kids entertained.

Located in a former industrial complex contiguous to the Old Town, Pelgulinna and Kalamaja districts is Telliskivi Creative City, the creative centre of Tallinn. This is the largest creative centre in Estonia, containing the offices of many international NGOs, creative organizations and artists.

There are several small designer stores and studios, 10 unique eating and drinking places, photo galleries, and tons of street art to satisfy both you and your camera.

Nearly 600 cultural events take place here every year, with a weekly flea market held every Saturday. Make sure to time your visit here to coincide with this so you can immerse yourself in the atmosphere here!

5. Be impressed at the St. Alexander Nevsky Cathedral

High up on Toompea Hill are the upper functions of Estonia’s government, with Toompea Castle housing the Parliament (Riigikogu). Equally as impressive is the St. Alexander Nevsky Russian Orthodox Cathedral, located right in front of the castle.

Step into this impressive building, breathe in the lingering scent of incense in the air and be dazzled by all the gold. This classic onion-domed 19th-century Russian Orthodox church has become a symbol of the city, and has become a stop that no tourist should overlook!

Perfect for a day trip, Lahemaa National Park is perfect for a hiking trip and nature watching. Here, you will find stony seashores, picturesque bogs, pine and cliff forests, rivers that cut into the limestone cliffs, as well as erratic rocks left over from the last Ice Age.

Lahemaa is one of Europe’s most important forest conservation areas, home to moose, wild boars, brown bears, lynxes, foxes and other wild animals.

Out of ideas of what to do at here? These are a few tours that might interest you:

Getting to Tallinn, Estonia

One of the easiest ways to get here is by ferry. One of the most popular routes is the ferry from Helsinki, Finland to Tallinn, which has upwards of 20 departures daily.

In Helsinki, take tram  #7 from the central railway station to Länsiterminaali (West Harbour) and get off in the very last stop, called “Länsiterminaali 2” (T2)  in Jätkäsaari which is in front of the terminal building.

Depending on the ferry, journey time is anywhere from 1.5 to 3.5 hours and will set you back €16 to €30 one way, depending on operator, season (costs spike in summer), and time of day (avoid the morning and late afternoons). That being said, you can get a return day ferry from as low as €19 if you know where to look!

There are up to 20 departures a day, most of which dock at Reisisadam port. From there, you can take Bus #02 to the Old Town, train station and even the Tallinn airport. It’s a remarkably compact city so everything is really close to each other!

Cafe in the ferry

On board the Tallink Silja ferry, there are activities aplenty to keep you occupied even in the short 2 hours. We hung around bars with live music, stuffed ourselves silly hopping from cafes to restaurants and buffets, and killed time being kids in the arcade.

Shopping on board, anyone?

There is no doubt also a shopping section for shopaholics to shop travel products too.

Can you believe there is also a supermarket within the 2-storey ferry?

There are also many flights to Tallinn, with the Tallinn Airport only a mere 5 kilometres from the city centre. Via plane, it’s only 30 minutes from Helsinki and 3 hours from London – once past the departure hall, you may hop onto Bus #02 or Tram #04 that will bring you to the city centre.

I hope that this short guide helps inform you on what to do and what to see in Tallinn, Estonia. Which is your favourite activity? What other hidden gems did you discover – do tell!

Special thanks to MyHelsinki and Tallink Silja for this experience! All opinions remain my own.