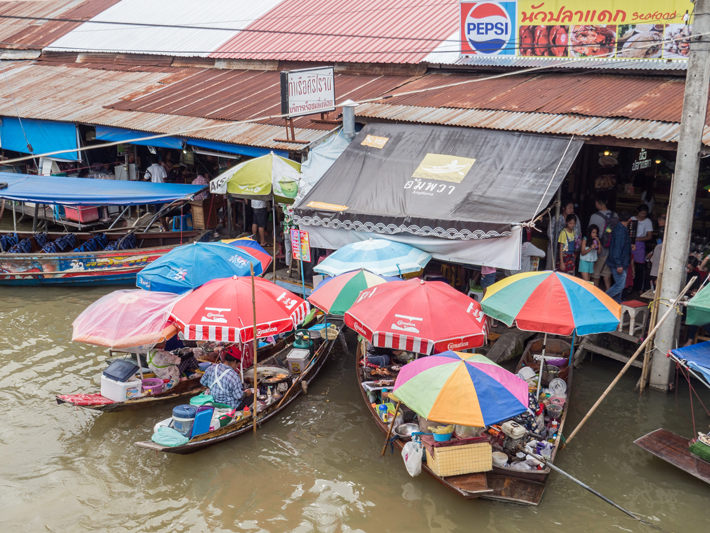 We were greeted by our host, Trin, and a minivan promptly at 8:30am at our hotel entrance.

He would be taking us to Samut Songkhram province to visit a local community, the well-known Maeklong Railway Market and Amphawa Floating Market.

Our first stop was to Maeklong Railway Market, 80 kilometres outside of the city, to catch the train intersect a market that is built right on the narrow train track!

If you haven’t heard about the railway market, what many tourists come to see and be in awe of is how the market vendors manage to make a living selling their fresh meat, dried goods or packaged foods right beside the narrow crevices of the train track.

Each time the train is about to pass, there will be a bell signalling its arrival.

Within that 2-3 minutes, every street vendor has to pull up their overhead tents and umbrellas, and await the passing of the train. I expected more scrambling by the stall owners within the seconds of the chiming of the bell, but no – they are so used to this train life that they do it in an agile and practiced manner.

Passers-by like us will be squashed right at the edge of the stalls and have our noses inches from the train. Tourists would be frantically taking out their cameras and snapping as the train passes by.

It takes all of 5 minutes for the whole commotion to end. The vendors would then put their stands back out and the market business will resume as usual – complete with housewives haggling, owners chopping fish up and tourists surveying the local produce.

Following that, we were on our way to visit a local community.

From a self-sustaining lifestyle to knowledge-sharing to strengthen the local community, this is what the second part of my day trip from Bangkok to Samut Songkhram is about.

Life in Ban Bang Phlap community revolves around water, with many canals and freshwater from Mae Klong river running through the community. There are many well-irrigated orchards producing coconuts, pomelo, lychee, papaya and other tropical fruits, as well as numerous vegetables and herbal plants.

A strong feature of the Ban Bang Phlap community is the locals’ intention to consume non-toxic, organic produce, and we had our fair share of tasting them during our afternoon there.

We first assisted in cooking a Thai meal at a local home owner’s place, learning about all the different ingredients used to make a typical Thai dish. We made both papaya salad and Pad Thai. Tom yum soup was also served as a side dish.

Although the Pad Thai didn’t taste up to my expectations of Thai food, I relished in the spiciness and sourness of the papaya salad and tom yum soup.

After a hearty lunch accompanied by the cacophony of the resident parrot that wouldn’t stop mimicking “sawadeeka” the whole time, we hopped on to the bikes to explore around the community of Ban Bang Phlap.

Cycling around the fruit orchards

Quite a delightful way to get close to the community by cycling around, we greeted workers in the fruit and vegetable orchards as we passed them by on our bikes. With each conversation, we learned more about the self-sustaining lifestyle that they have grown to be a part of.

The wooden houses we passed by are usually owned by one family over several generations, and it can go back to as far as 100 years.

One of the families we met preserve fruits and vegetables for a living.

The family of Chawiwan Hatthakam has secret recipes accumulated from over 160 years of wisdom passed down through generations on the processing and preservation of vegetables and fruits. They turn bitter tastes into traditional Thai sweet delicacies.

These fruits and vegetables are soaked in sugar and salt syrup separately for extended periods of time to get rid of the bitter taste.

It takes 2-3 weeks soaking them in salt water, followed by 1 week of boiling them in water with sugar. The whole preservation process normally takes up to 1 month, but can go up to 3 months depending on what fruit is being preserved.

By the time it is ready, the fruit or vegetable becomes a sweet treat favoured by all.

One of the other pit stops saw us at an abandoned hut where fruit is made into charcoal with the purpose of ridding fishy smells. They can be placed in refrigerators and closed spaces where it tends to smell.

Now that’s one household trick I never knew about!

We watched as a family production team went through different steps to remove the husk of coconuts. First, the big, burly man of the household would throw the coconut against a spear to cut the outer husk.

It looks like a highly dangerous affair, and we noticed that he had previous scars on his forearm from this profession of his. I can only imagine just how deep the cuts go in his forearm.

That is followed by several more rounds of cutting of the coconut husk by different members of the family until the eventual white meat of the coconut reveals.

These coconuts are then sent to Bangkok, where they are sold to people like you and me!

Each day, around 1000 coconuts would be de-husked, carved and peeled this way, depending on the demand from the factories in Bangkok. These workers repeat the laborious process from 7am to 5pm every.single.day.

The external husks are used as by-products for making charcoal and coconut oil.

Living on such fertile land, the community is almost self-sufficient in food. We had a good taste of some of the fresh produce on this area.

Two of their best produces are coconuts and pomelos.

The pomelo of the Khao Yai variety is distinctive, with a soft and naturally sweet taste. The fruit sells at a good price and has a long shelf life because the flesh is perfectly dry but juicy.

I was in disbelief that the pomelo had not been artificially sweetened when I had my first taste of it. It’s just so succulent and sweet with no hint of bitterness that you would usually find in other pomelos!

Ban Bang Phlap’s coconuts can be said the same – juicy and sweet. Best enjoyed after a workout on a warm day, that’s exactly what we did after our cycling jaunt. Nothing like a fresh, cool, thirst-quenching drink to cool us down.

For the last of our day trip from Bangkok, we drove to Amphawa Floating Market.

Apart from the other floating market, Damnoen Saduak Floating Market, this is another popular market for tourists to visit.

The market is built along the Amphawa canal, part of a network of more than 300 canals that stems from the Mae Khlong river. Amphawa Floating Market officially opens on Friday, Saturday and Sunday and on official Thailand holidays, from 12pm to 9pm.

This market is flooded with tourists when we were there on a Sunday, so much so that we experienced human jams whilst crossing from the bridge from one side of the canal to another.

Catered to tourists and locals alike, you can find street-side stalls selling everything from souvenirs, accessories (socks, earrings, wallets), toys, food and dessert.

The highlight of this floating market is watching your chefs cooking and preparing your seafood barbecues from their boats in the river and then serving you across the boat to the platform, where eager patrons will be waiting for their piping hot food. All that while being segregated by a body of water between you and the cook.

Longtail boat rides are also available if you wish to hop on and explore the surrounding canals and rivers. We opted out of it as a walk around the market sufficed for us.

The Amphawa Floating Market and Maeklong Railway market are situated less than 30km apart. That makes it perfect to combine both places into a single day trip from Bangkok.

We’d finally checked off two of the most popular day trips from Bangkok – the Amphawa Floating Market and the Maeklong Railway Market. It’s fascinating how the Thais have managed to build a bustling market from the unlikeliest places, like a canal and a train track.

Where to stay in Bangkok

We stayed at the centre of Bangkok during our stay in Bangkok, at Novotel Bangkok Sukhumvit 4.

Catering to business and mid-luxury tourists, we had a spacious room complete with 2 single beds, a desk, and a couch, while not compromising on the bathroom space.

It was in the heart of the red light district and walkable to major shopping malls.

We had some difficulty to get recommendations from the front desk for local food or decent Thai massage around the area though.

View from our hotel room

Our favourite Thai massage in Bangkok

While massage parlours were aplenty along the streets of Bangkok, we stuck to Healthland, a popular massage and spa chain around Bangkok. For the price of 600 baht/ USD18, you are treated like royalty for the 2 whole hours, with fresh clothes to change into, clean beds and linen, and tea served at the end of the massage.

It’s perfect that we had one walkable from where we stay.

While this tour had no doubt been informative learning about the local community of Ban Bang Phlap, it felt as if we had to squeeze every bit of information out of our guide, instead of him voluntarily sharing the information with us.

That said, the minivan was a luxury to commute around in, with plenty of space and no shortage of drinking water provided for us throughout the journey.

We came across tourists who stopped our driver, asking for a lift back to Bangkok city. We were glad we didn’t have to be put in that situation. That is one of the perks of following a tour – you don’t have to crack your head trying to figure out directions in Thai.

Special thanks to TakeMeTour, Air Asia, Novotel and dtac for this experience! All opinions remain my own.

Where to stay in Bangkok, Thailand

11 Reasons Why You Should Visit Phuket, Thailand

Things to do in Krabi, Thailand, That Will Make Your Trip Worthwhile