Visiting Amsterdam for the First Time? Know these.

Home » Visiting Amsterdam for the First Time? Know these.

First time in Amsterdam? Prepare yourself for an explosion of colours, culture and variety when visiting Amsterdam.

Know these travel tips for Amsterdam to prepare for your travels there.

What to do in Amsterdam, Netherlands

If it’s your first time to Amsterdam, you’ll absolutely LOVE visiting these food, flower and second-hand markets. Here are but some to visit:

ONLY open on Saturdays! A farmer’s market selling organic food.

My favourite market because they have food stalls as well as knick knacks e.g. bags, winter accessories, clothing at affordable prices! 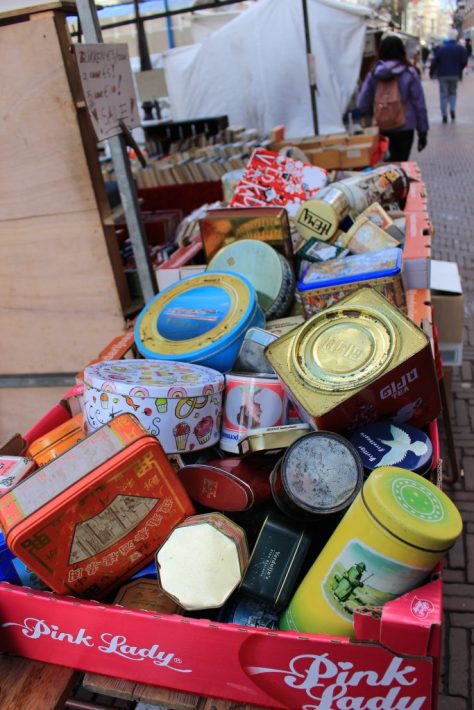 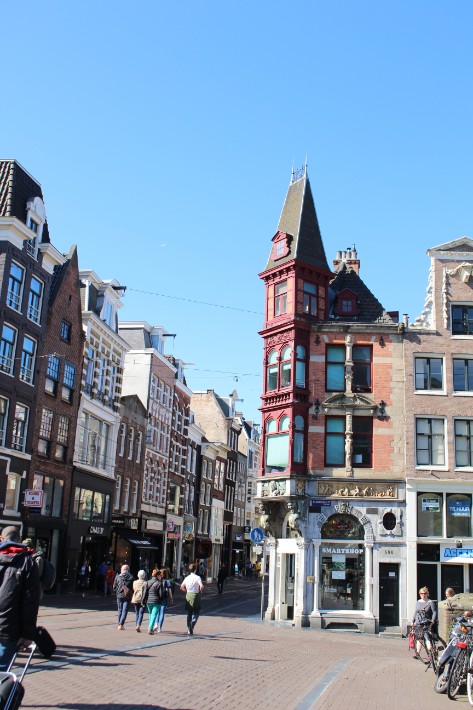 You want to be hanging around Dam Square. You can find never-ending shopping on the streets surrounding Dam Square. Brands such as Forever 21, H&M, Esprit, Urban Outfitters, Timberland, Body Shop.

Check out the Red Light District 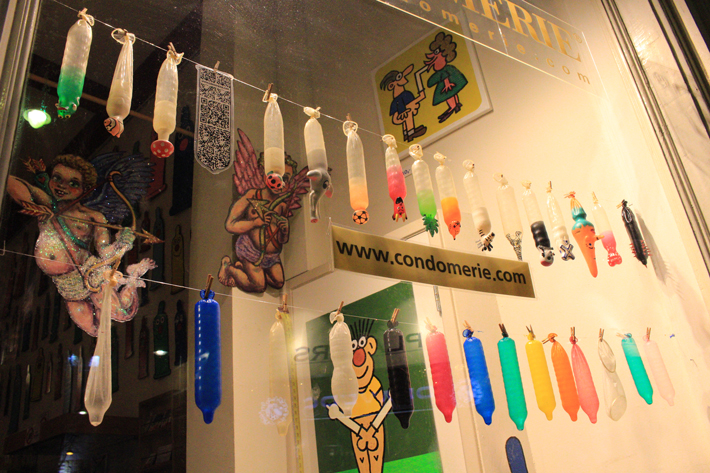 In case you can’t tell… They are condoms!

The Red Light District is quite possibly the best part of Amsterdam, and what Amsterdam is most famous for. Who knows, you’ll be smoking weed for the first time in Amsterdam too, since it’s so commonplace. 😛

Thanks to Florian, we found the Blue Light area that we never knew existed! Who would have known they are hidden in this red light district?! It was pretty amusing looking at the transvestites bathed in blue light. chuckles

It surely is entertaining peering into the windows of this district. We spotted one really steamy window pane and sneered. I did what I do best – checking out them chicks. 😉 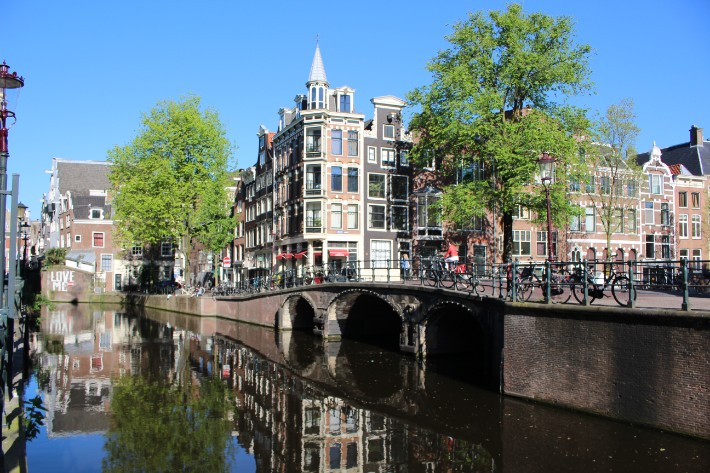 Weather is unpredictable at best. It’d be bright and clear one minute and a downpour or snow-pour in the next, for about 30 minutes or so, then (thankfully) it’ll clear.

Getting Around Amsterdam, Netherlands

Public transport in Amsterdam is a pain when I first went to Amsterdam for the first time. I tried to master it but the long names don’t help me one bit.

The best way? Go on foot, since everywhere in the city centre is reachable by walking!

Otherwise, being the cycling capital of the world, you can definitely get around easily

Amsterdam has a really small population of 800,000.

Already the tourist numbers way surpass this population, at 3 million per year.

Reminds me a lot of New York‘s. You see “I Amsterdam” plastered on every imaginable souvenir item.

There are 165 canals in Amsterdam alone!

Love every single house along the canal. These long house boats on the river are also liveable. It can occupy up to 80 square metres, and apparently the rent is exorbitant! 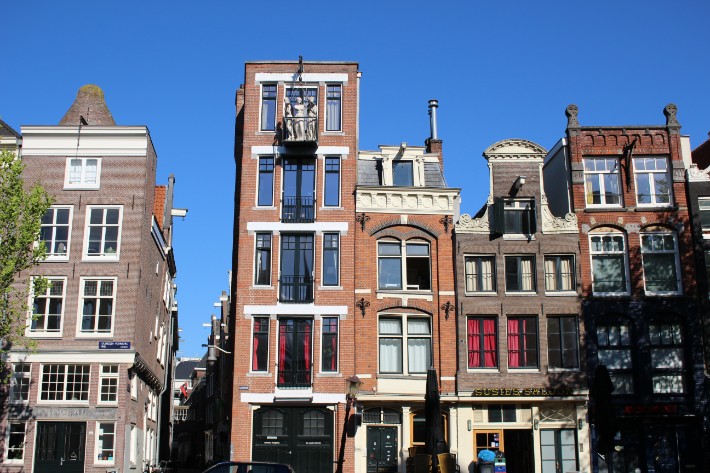 How do you bring up furniture up the narrow houses along the canal?

Because the houses along the canal are very narrow, it is difficult to move bulky items (e.g. furniture) up the house.

Hence, at the tip of every house, a hook is installed, where former sailors would use a pulley system to pull the items up.

Because of this, most houses are tilted forward. Interesting fact! I never noticed these details until a local shared it with me. 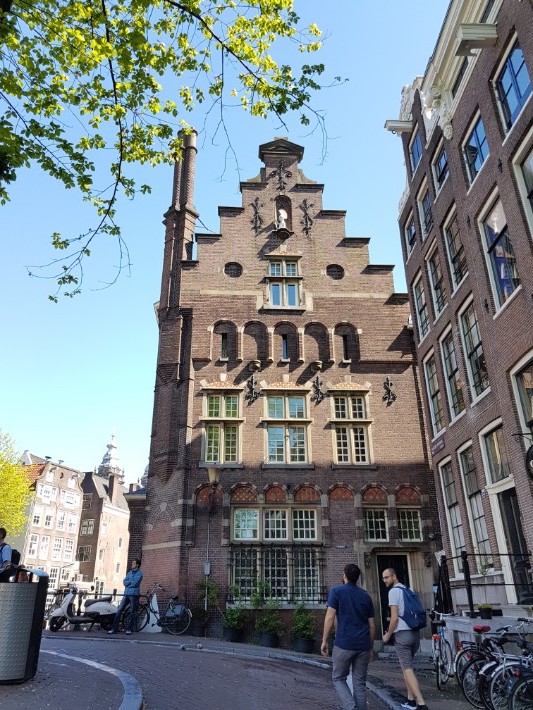 They space upwards instead of sideways.

This means not having to pay extra tax tax for a larger area of the house, since tax is calculated based on area of land occupied.

Most of the houses are slanted and never parallel to the ground.

That is because Amsterdam was built on marshland. So, houses slant and lean on the neighbouring house, which leans on another. Funny how they won’t collapse! Once I found out about this, I cannot help but notice the off-kilter houses lining the canals. Ha!

These houses used to be made from wood, but because wood catches fire, most houses along the canals are made of bricks now. 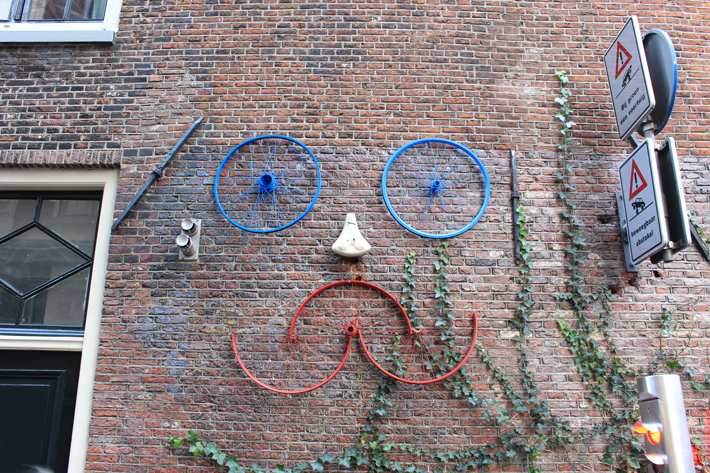 Add to the lit lamp posts along the canals at night, it lends such a romantic feel to it, especially when it was snowing heavily on the first night we arrived! I would brave the cold to soak in the sight once more… 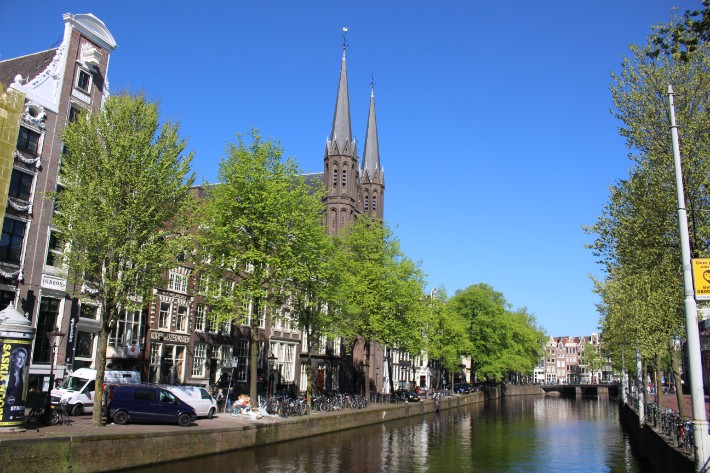 The trees by the river are not for decorative purpose.

They are elm trees, used to hold the canal in place with its roots. 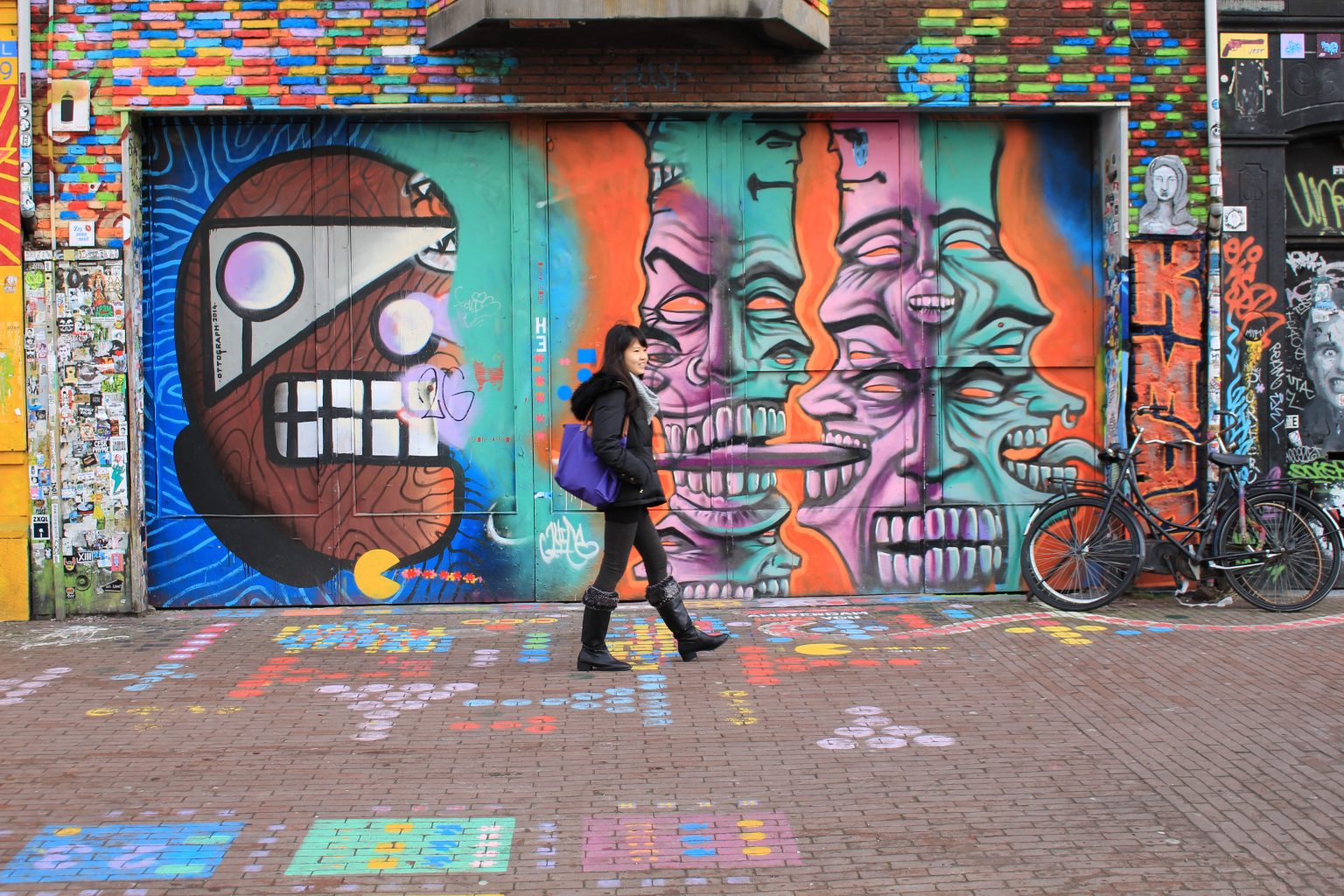 LOVE this street with all the vibrant colours. I was so happy when RQ and I chanced upon all the graffiti. We easily dubbed it one of our best highlights in Amsterdam. Every brick was shouting in different colours at me. 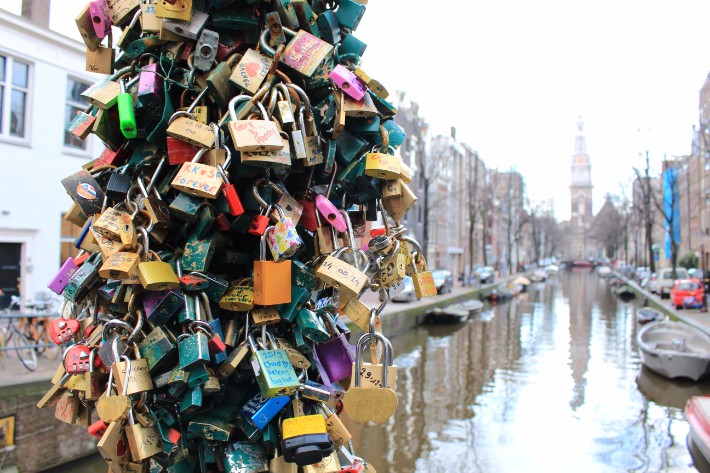 This building below is the widest house by the canal aka most expensive.

Know why? They used to own a weapon & trade business.

This restaurant below, In de Waag, was part of a border that allows people into Amsterdam.

Now it’s transformed into an expensive restaurant in the middle of a square at Nieuwmarkt. 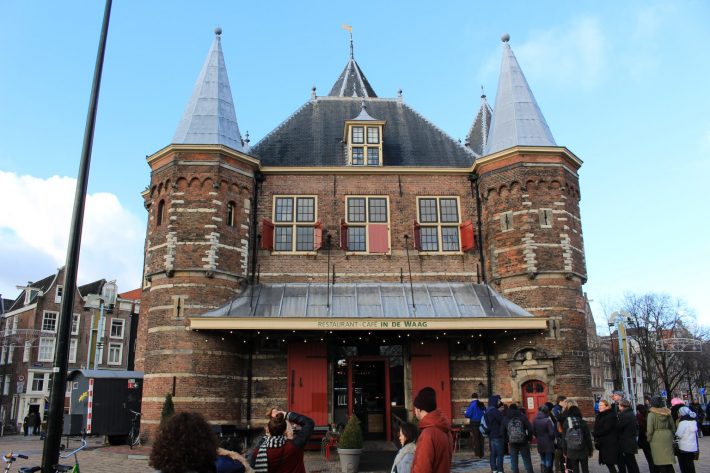 A temple actually exists in Amsterdam, right in the heart of the Chinatown street.

This goes to show what a cosmopolitan city Amsterdam really is. These cars are supremely tiny they can fit & squeeze in at any corner of any tiny little street. Once we saw 2 humungous guys sandwiched in this car- it was such a hilarious sight! I’m pretty sure I could drive that car too… It looks like a toy.

There are 1753 bridges in Amsterdam.

That is almost 3 times more than Venice! Below shows a crowned bridge, the Blue Bridge. It’s situated near Intercontinental Hotel, which explains its royalty. 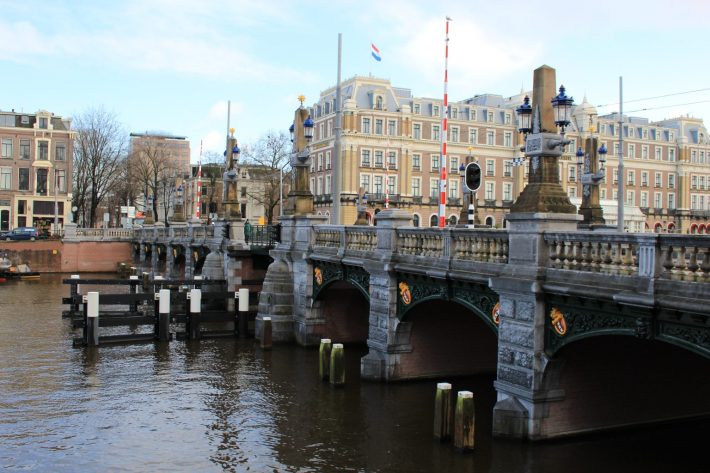 The Dutch are one of the tallest people in the world.

I tried going on a Dutch hunt but it was so so difficult to identify a genuine Dutch because everywhere we go, tourists infiltrates! So based on Florian’s description, a stereotyped version of a typical Dutch male is: tall with long hair swept behind. Haha!

The first gay marriage in the world happened at Waterlooplein, Amsterdam.

Gay flags are displayed proudly at a couple of shops here.

My tour guide claims Amsterdam is a pretty liberal and diverse place that is comparable to NYC. But I’m skeptical about that after having witnessed New York for 14 days.

I haven’t seen any peculiar or queer living beings in Amsterdam either, except on 1 encounter, where a guy wore matching blue with white stars pyjamas & socks on the street.

Amsterdam is a predominantly black population.

This is true where I lived, in the residential neighbourhood.

So we were approached by a Singaporean, who noticed our accents. Turns out he’s here on exchange too at Delft and travelling alone in Amsterdam. I thought that was the end of our brief encounter with a Singaporean in a foreign city.

Fancy bumping into Christopher again, as I was leaving Amsterdam! It was unbelievably coincident. I just happened to turn around to have my last wistful glance at this beautiful city that I may never step foot in again and I came face to face with this familiar face! 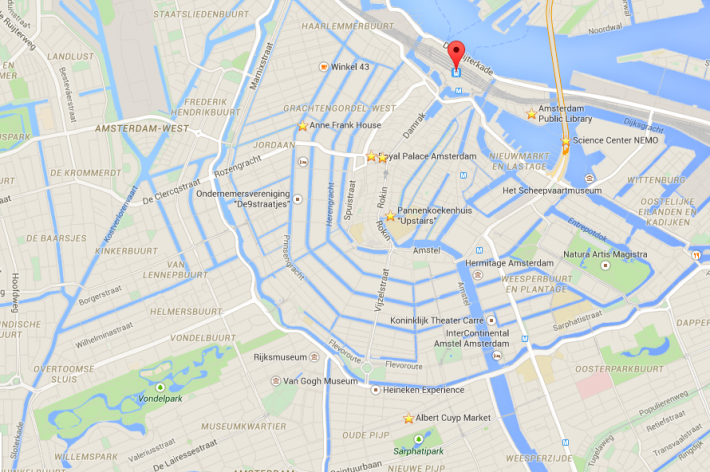 Street names were a little confusing ‘cuz Dutch words are so long. Streets appear long too ‘cuz they are shaped like a horseshoe surrounding the Centraal Station. (observe map above!)

Another strange but noteworthy phenomenon is that the shops are open the latest on Thursday (9pm), and close the earliest on Sundays (6.30pm).

Apparently, Tuesdays and Thursdays are the days for students to spend late nights here. Saturdays are also the party nights. I spent 3.5 days and I found our itinerary to be pretty packed.

I love looking at old couples holding hands and walking down the streets of Amsterdam. I thought the photo below with the couple’s silhouette against the (rare) strong sun was particularly mesmerising.

Travelling experts have made a study to see what exactly is the average amount spent by travellers in Amsterdam while taking in the full experience of the city.

This reflects what everyday travellers tend to spend in Amsterdam. Think mid-range – most of the major attractions, a few cab rides, maybe a big night out, and a bit of shopping on the side.

It doesn’t include the cost of hotels or car hire in Amsterdam as these are often booked in advance.

Want to see where it all goes? Read on!

Cost of Entertainment in Amsterdam

Cost of Food and Drink in Amsterdam

Cost of Transport in Amsterdam

Taxi from airport to the center: €45

Train from airport to city center: €4.20

Bus to Venice dock from the airport: €9

Cost of a Shopping Trip in Amsterdam

Recommended number of days in Amsterdam

4 full days, if you want to do everything I listed at a leisurely pace yet be able to people-watch and leave time to shop. If not, 3 is enough.

Strangely, we always have the 7pm-8pm block where we’ll find ourselves with nothing to do. Done with dinner but too early for drinks.

We didn’t have time to people-watch, on hindsight. The only time I did that was when I was in the car on the way to the Centraal Station when leaving Amsterdam… :/ It was then that I saw how the cyclists do their thing, how girls cycle in heels without effort, how they carry their handbags and still were able to cycle so effortlessly. Didn’t club nor try their “specialty” too, which is a pity.

All in all, my first impression of Amsterdam is that it’s a beautiful city with beautiful people, both inside and out. There was a time when a passer-by called out “beautiful ladies!” to us as we strutted past him along the streets. They all have good hearts. 🙂 Everyone dresses well here.

This was my first trip out of France and first time to Amsterdam. I’m so glad RQ and I managed to make it happen. We were planning it months before I left for France (on NYE).

Being brought back into a land of my native language made me realise how I’ve become more acute to body language when you don’t understand the language being conversed.

That said, I hope to be able to understand French better by the end of this trip! 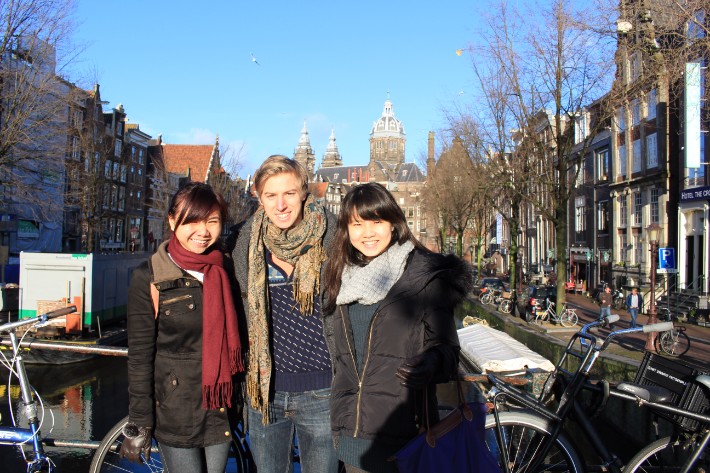 Oh, how I will miss you too. Who knows when I’ll see you again.

Read other posts about Amsterdam: