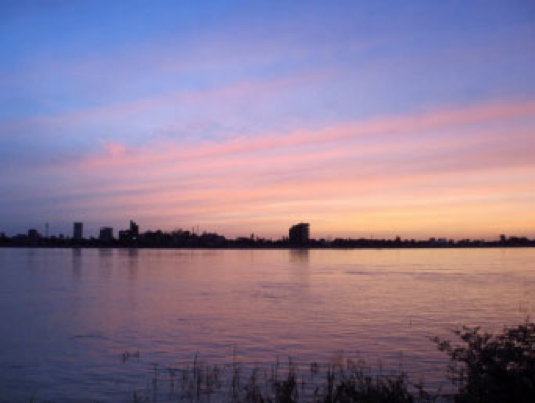 What to Do, See and Where to Stay in Kampot, Sihanoukville & Koh Rong, Cambodia

When you think of Cambodia, Siem Reap’s Angkor Wat and Phnom Penh’s Genocide Museum come to mind. Is there really nothing else to do or see in Cambodia? Wondering if you should pick the lesser known parts, Kampot or Sihanoukville?

During my trip to Cambodia, we visited Kampot, Sihanoukville and Koh Rong. Along the way, we found a couple of exciting gems for the adventurous. There are activities ranging from via ferrata and rock climbing in Kampot to living on a treehouse overlooking the sea in Sihanoukville. Those alone will want you extending your Cambodia trip for it! 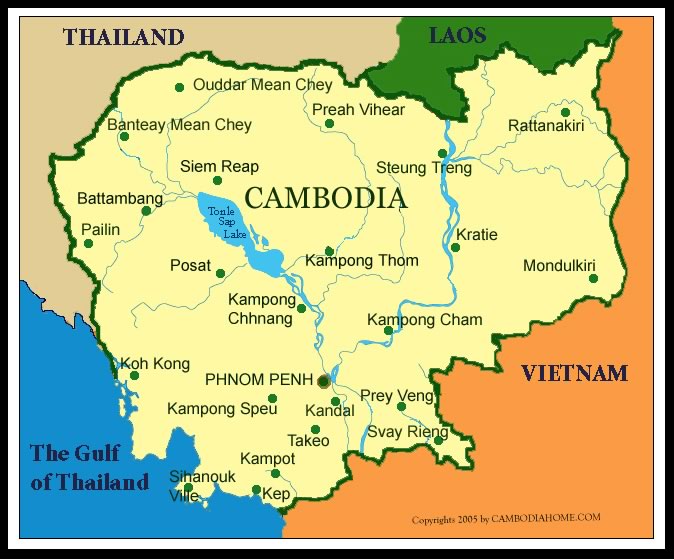 Kampot is a peaceful little province Southwest of Cambodia, a great respite from the bustling Phnom Penh. Here, rather than tourists looking for the nearest sights, you can find many seasoned backpackers who come here for work and travel, or simply as a stopover from months of Southeast Asia travelling. 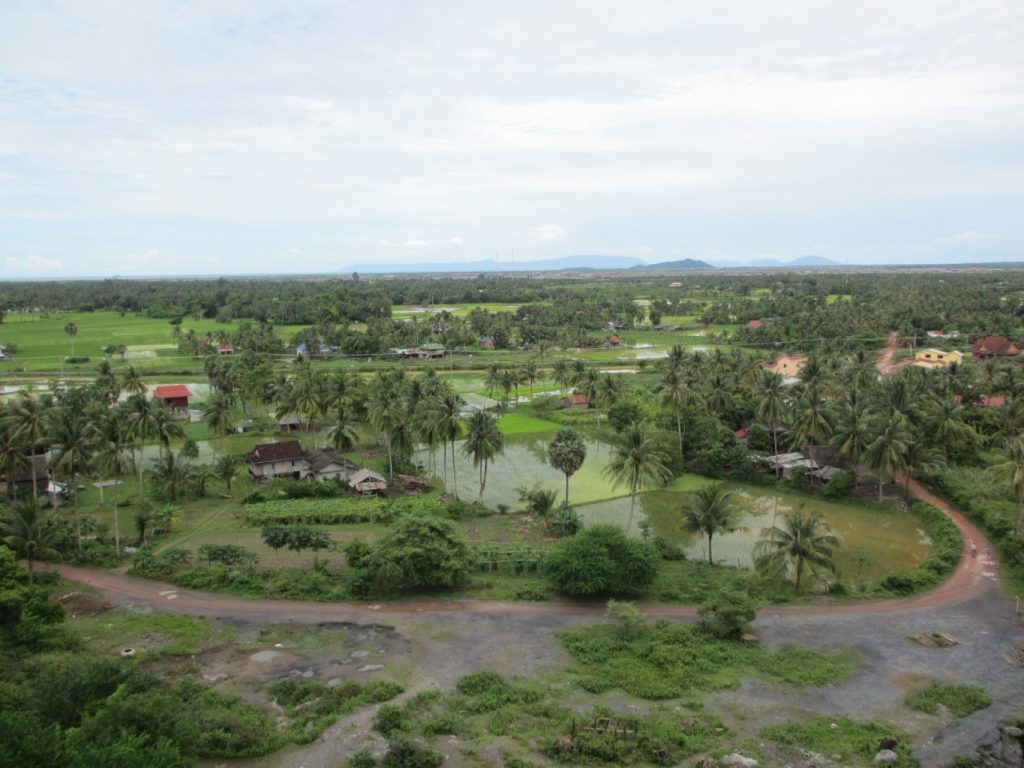 Kampot province is renowned for the quality of its fruits (durian, coconut, mango, etc.), its sea salt and their famous Kampot Pepper. Kampot’s climate and soil type combined with generations of pepper farmers make Kampot’s pepper very much sought-after worldwide. 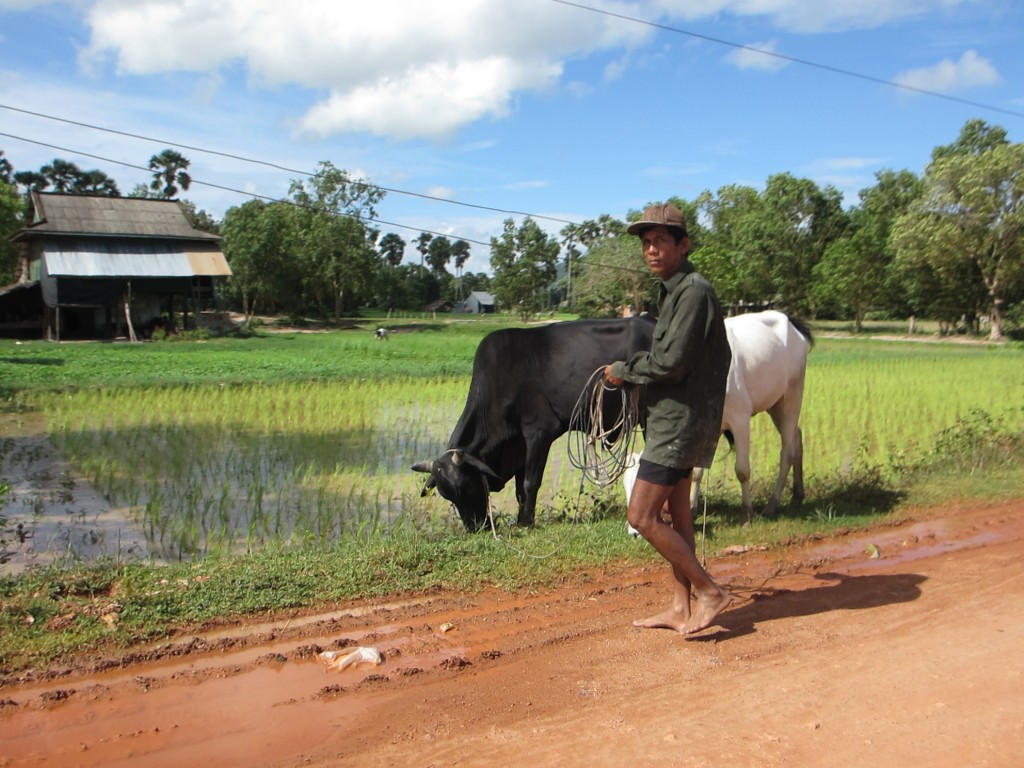 Famous attractions in Kampot include the Bokor Mountain, salt fields and pepper plantations. There are also plenty of villas and old shopfront trading houses to check out, making Kampot a pleasant area to wander through.

What to do and see in Kampot, Cambodia

Because Kampot is not as developed and touristy as Phnom Penh or Siem Reap, to get to most of the places stated below, you would require a driver. You can hire a tuk-tuk driver for a fixed full day fee to bring you around these places!

As climbers, when we found out that there was an opportunity to climb in Cambodia, we unhesitatingly made a go for for it!

Climbodia is managed by David, a Belgium who discovered the limestone rocks that are perfect for climbing. This project is managed solely by him, who created the routes for rock climbing, via ferrata, abseiling and caving. 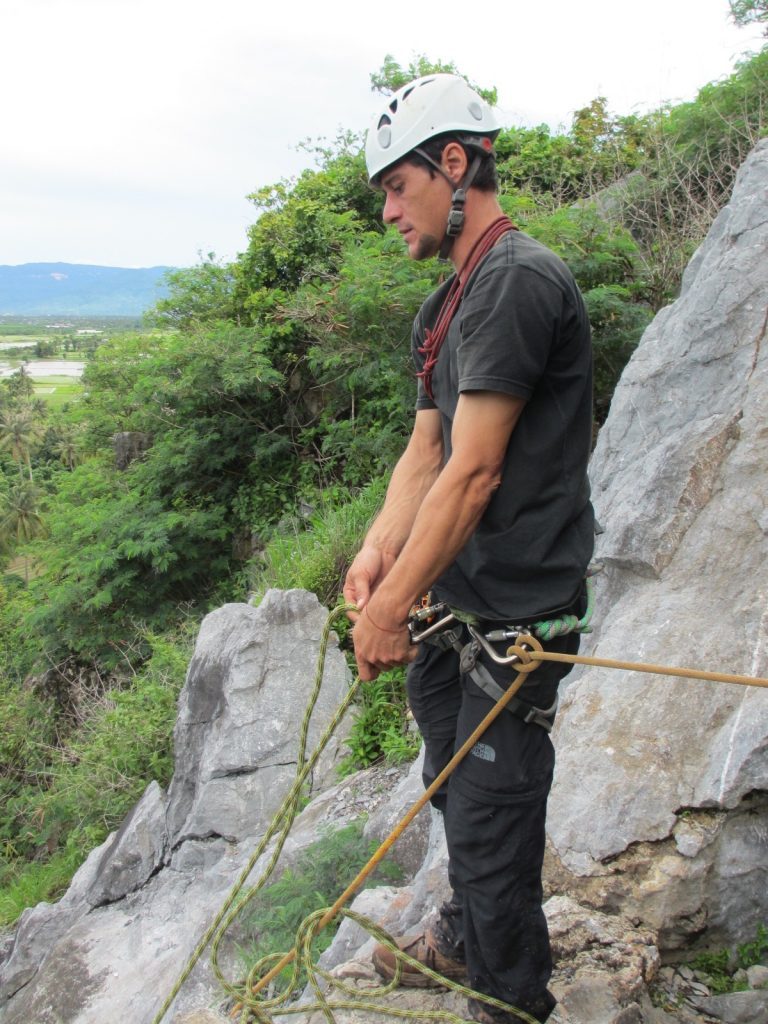 David is a genuine and sincere man, whom we corresponded through Facebook prior to our visit. On the night we arrived at our villa, he personally came down to talk us through the package, which included picking us up and driving us to the location. All equipment was provided by him and certified safe, and his helpers are all very professionally trained by him. 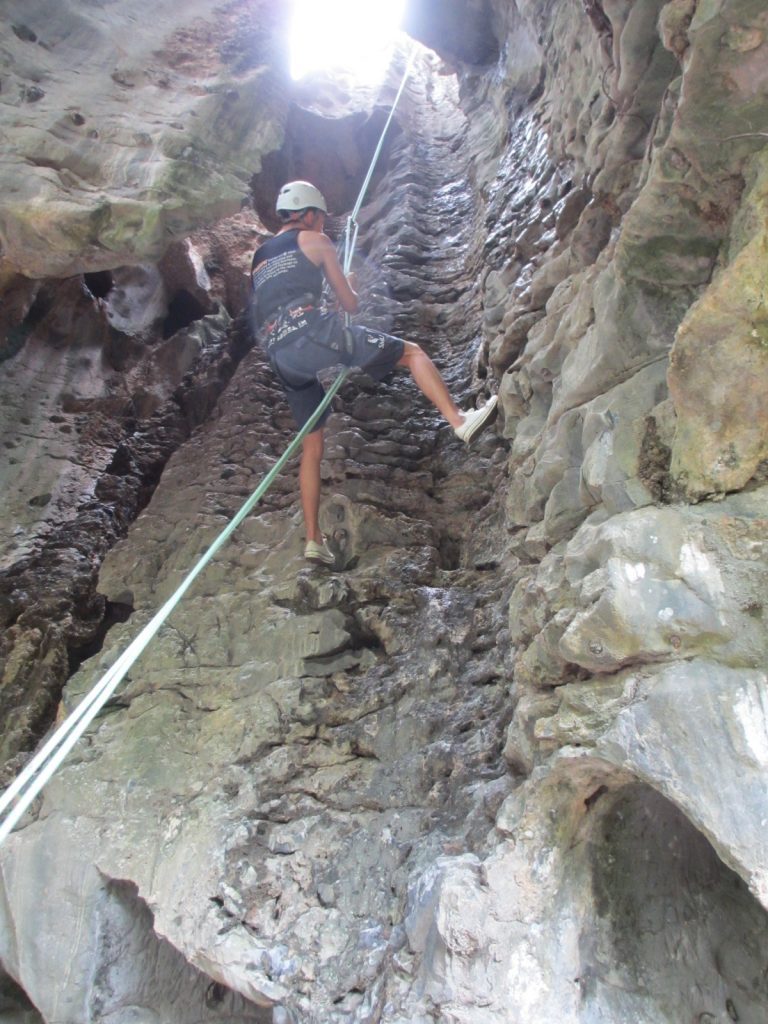 We opted for a half a day tour (you can also choose a full day tour), which includes via ferrata, abseiling, caving and rock climbing. It was thrilling to be rewarded with such a panoramic view of Kampot at the top of the routes, and satisfy the itchy fingers of us climbers! Anyone with any (or zero) climbing experience can be part of this fun, as long as you are not afraid of heights! 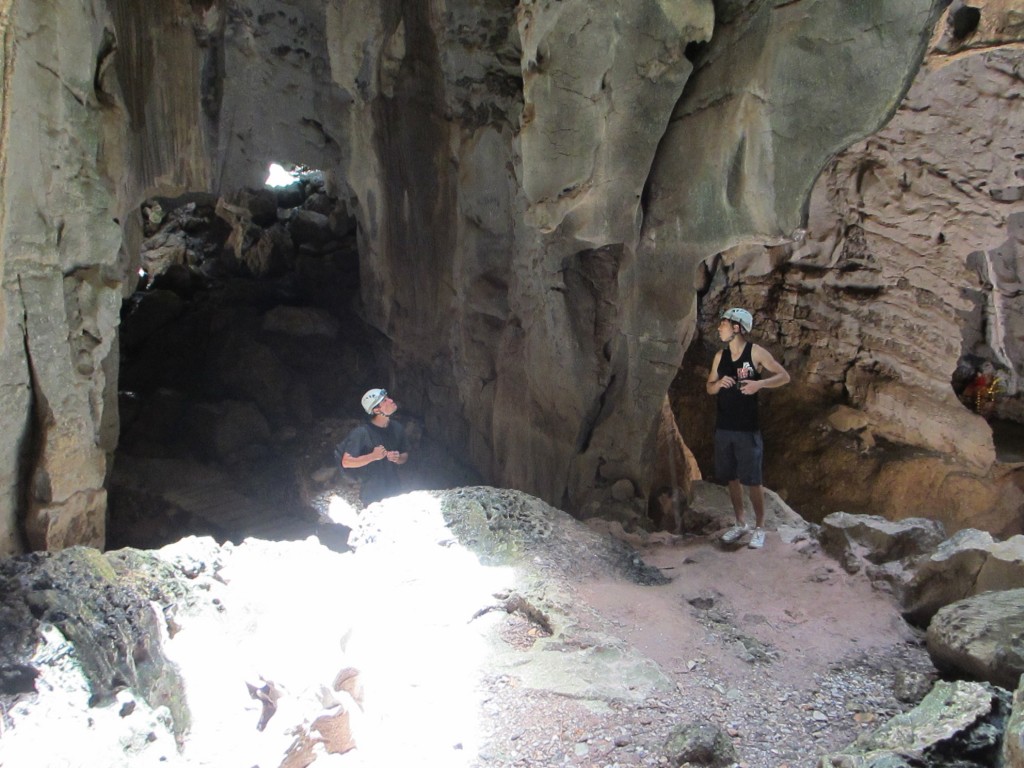 Rock climbing in Cambodia was definitely a different kind of travel experience, and a welcome change from the usual sightseeing. 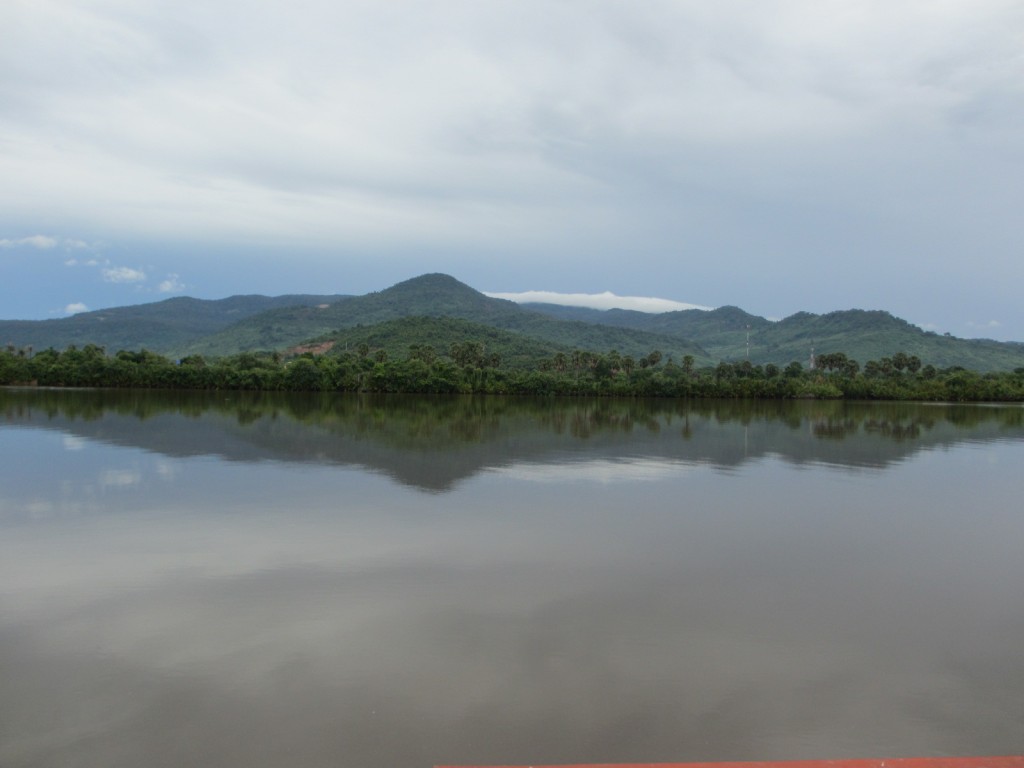 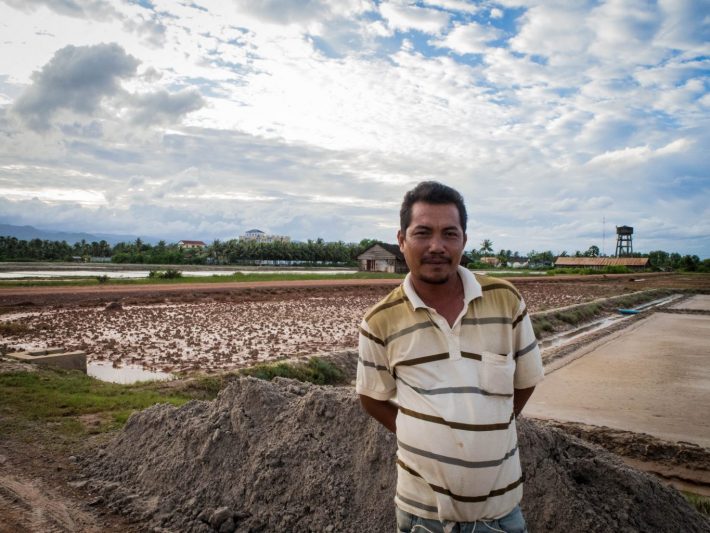 A Cambodian local in a backdrop of salt fieldse 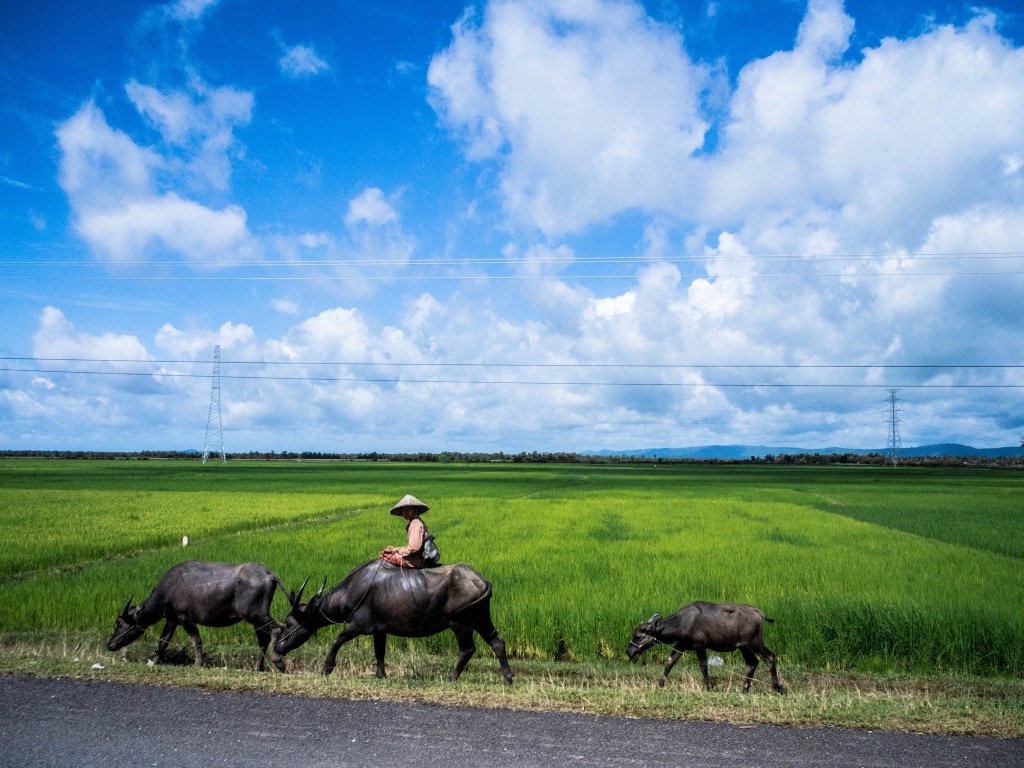 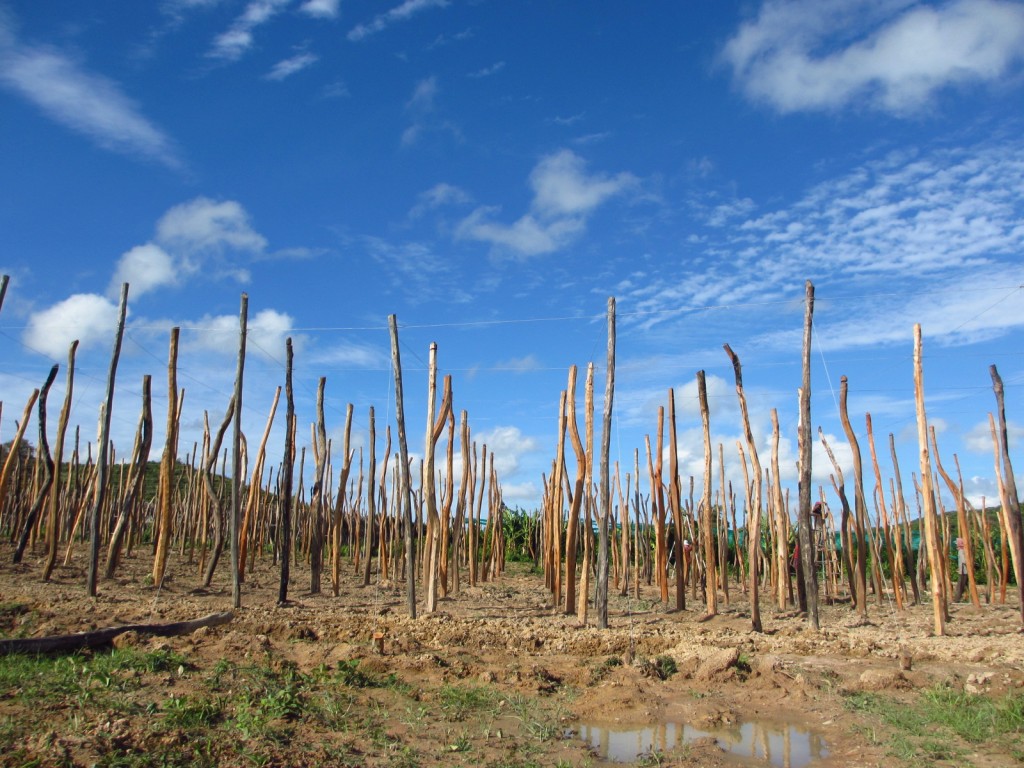 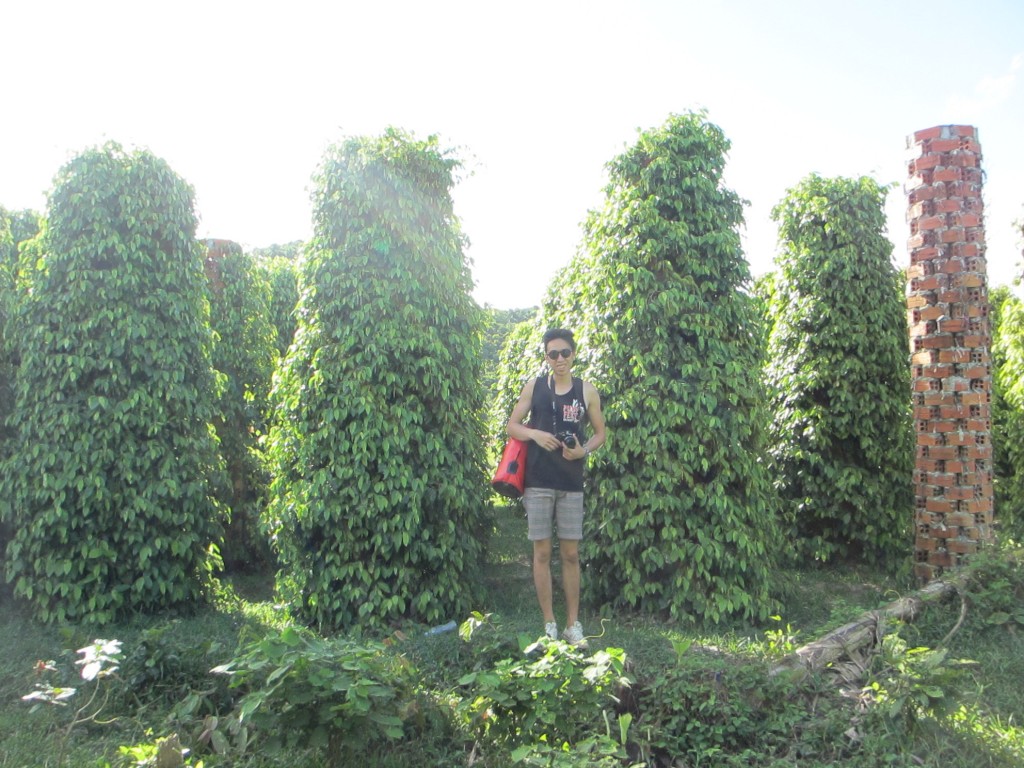 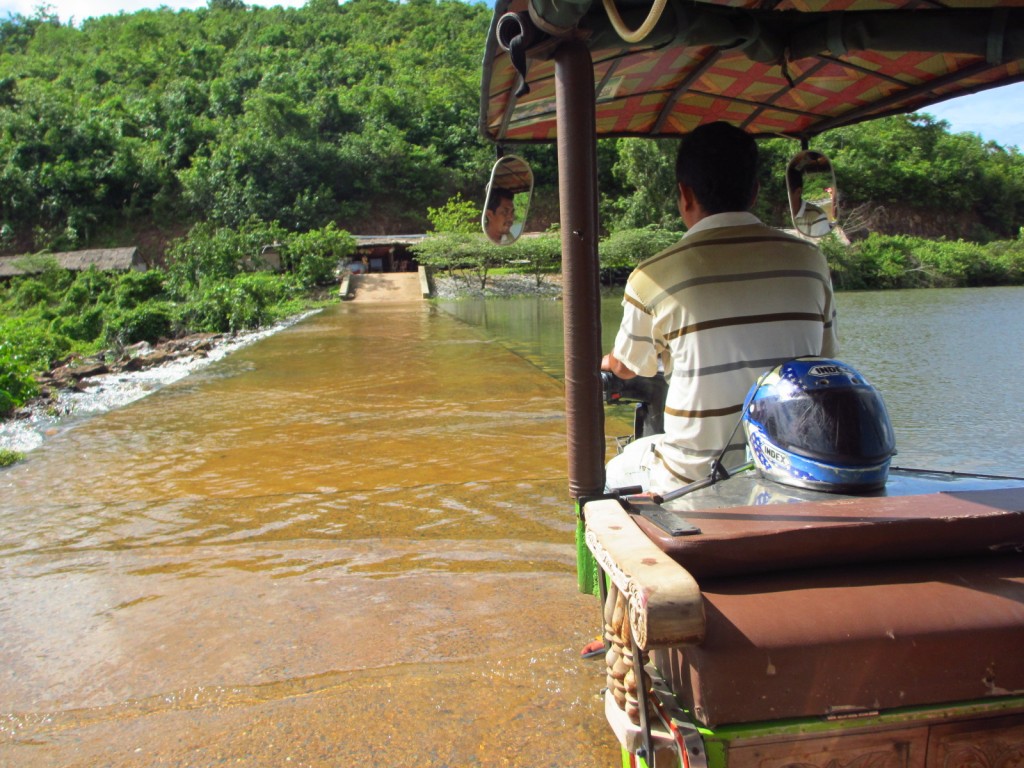 This lake was unbeknownst to us until our kind driver brought us here. This path you see in the picture is actually in the middle of a lake. It’s submerged in water and yet, vehicles can still cross over! We were so amused at how the tuk-tuk and motorbikes can cross over through water without issues.

If you are ever considering renting a scooter and exploring the town yourself, I would suggest you play safe and have protective gear, such as wearing your motorcycle helmet, as roads can get muddy, bumpy and as you can see above, wet!

Where to Stay in Kampot, Cambodia

We lived in Villa Vedici for the first night. It is situated on a private land pretty far away from the town’s hangouts. Surrounded by greens, the villa overlooks the lake, and opens to a backdrop of the Bokor National Park, a really peaceful property to lounge in. They’ve got a common room to watch movies, a play area that is equipped with a table tennis set, and a small porch with old weights. 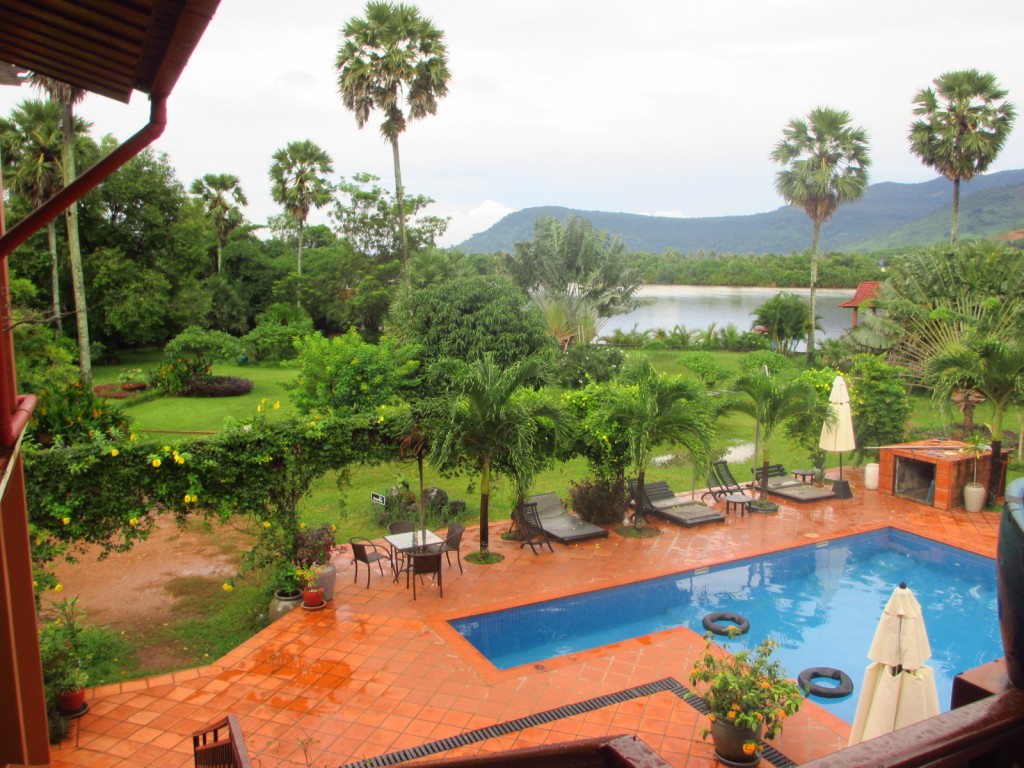 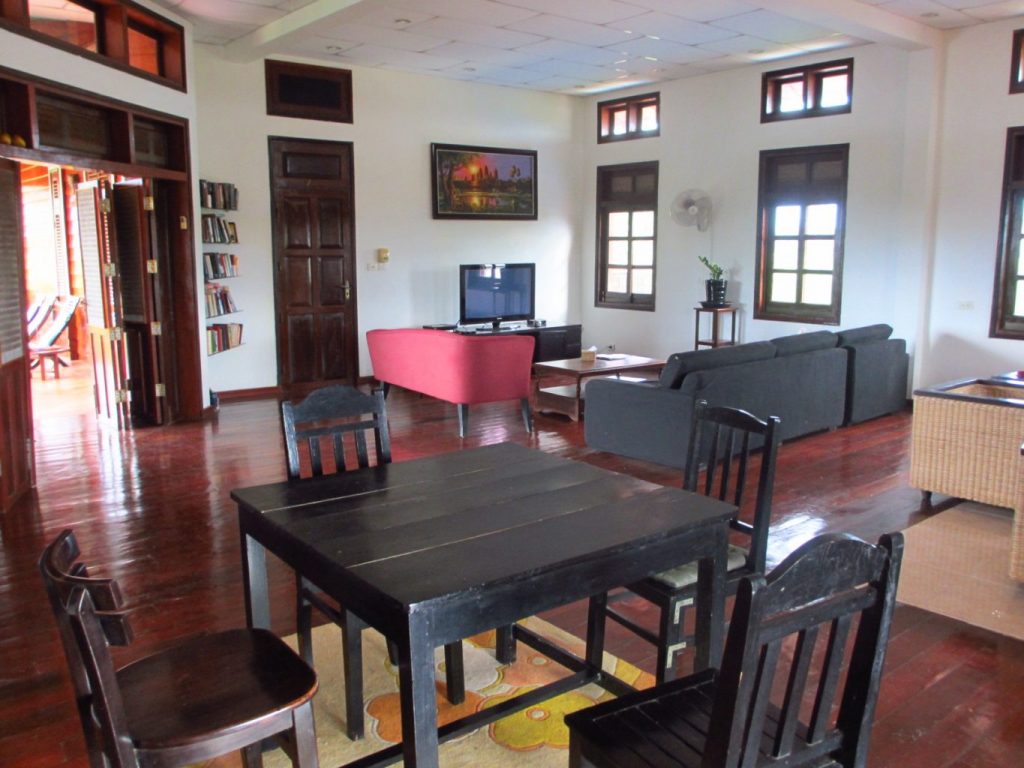 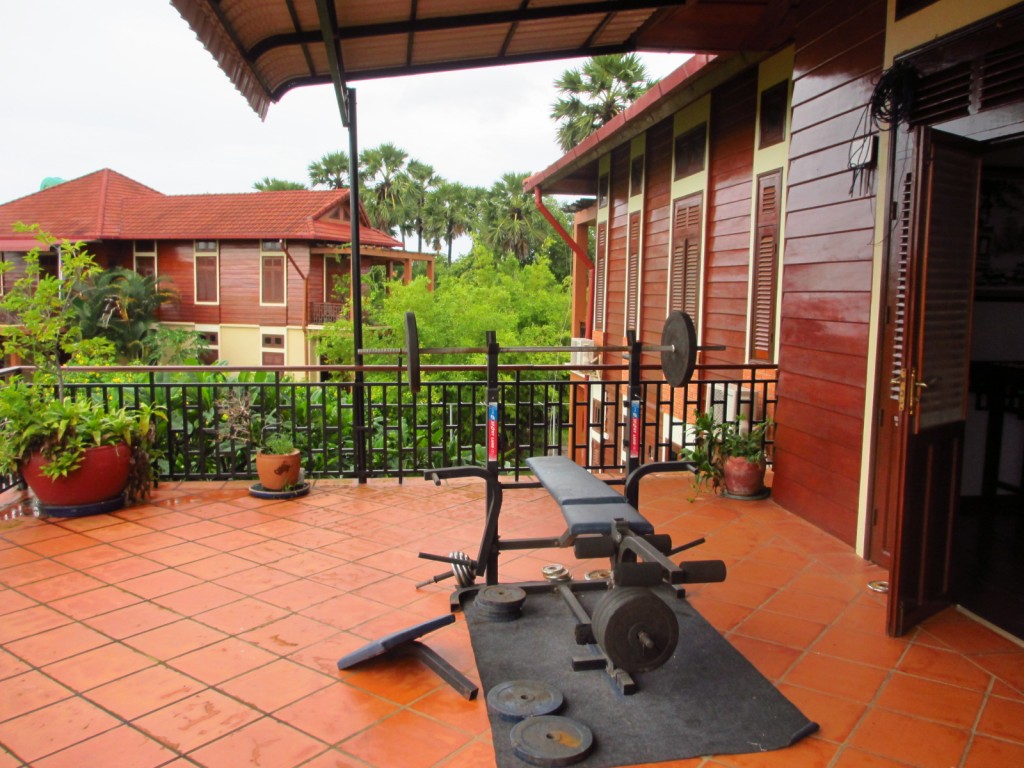 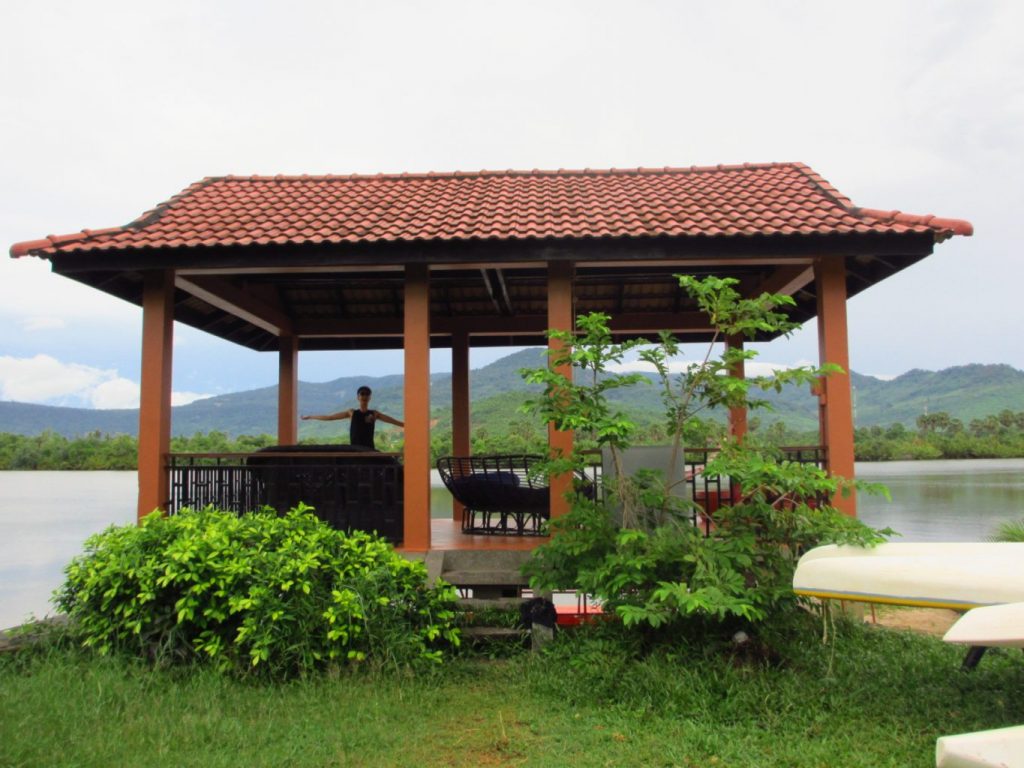 We, however, found it rather inconvenient as we had to hire drivers through the receptionist whenever we wanted to head out. It takes about 5 minutes by tuk-tuk to head to the main area of Kampot. That being said, we still enjoyed the untouched nature while we were there!

When you think of Cambodia, beaches are usually not the first thing that come to one’s mind. But in actual fact, situated near the Gulf of Thailand, Sihanoukville actually has a couple of beach islands off its coast! Sihanoukville is increasingly drawing backpackers and expatriates from Phnom Penh for beach breaks off the main island. 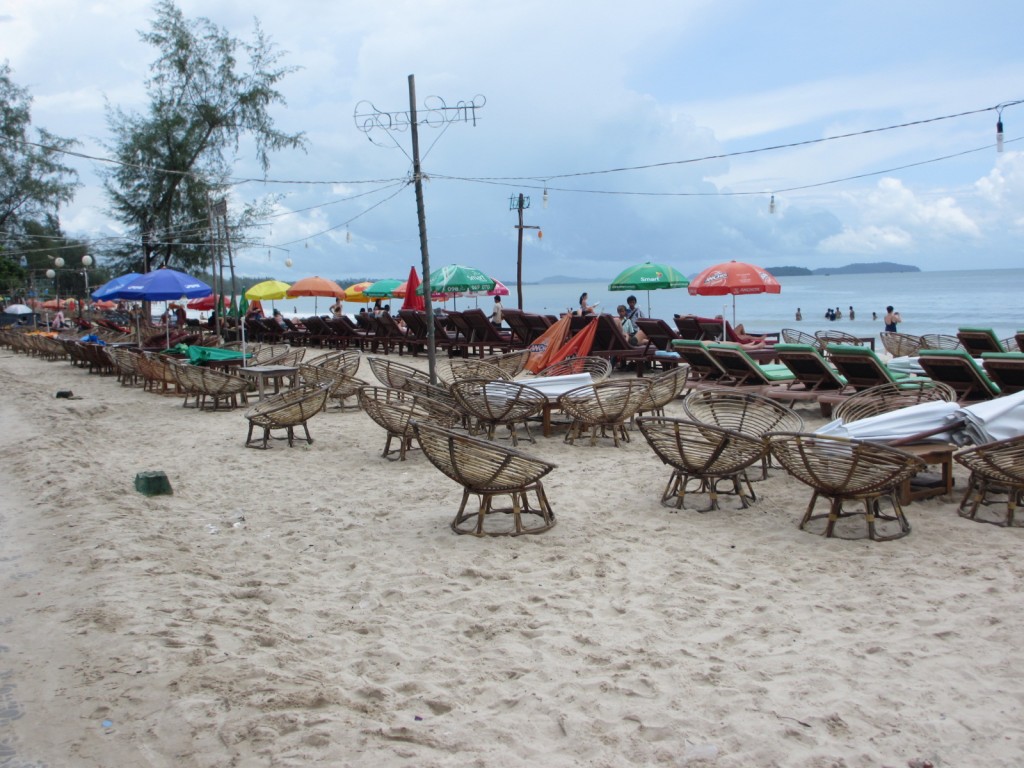 Though the beach isn’t the cleanest and can be overcrowded with tourists, it still attracts many who come here to enjoy the beachside bars and restaurants. There are even locals going around to sell manicure/ pedicure and massage services, and making friendship bands to sell. 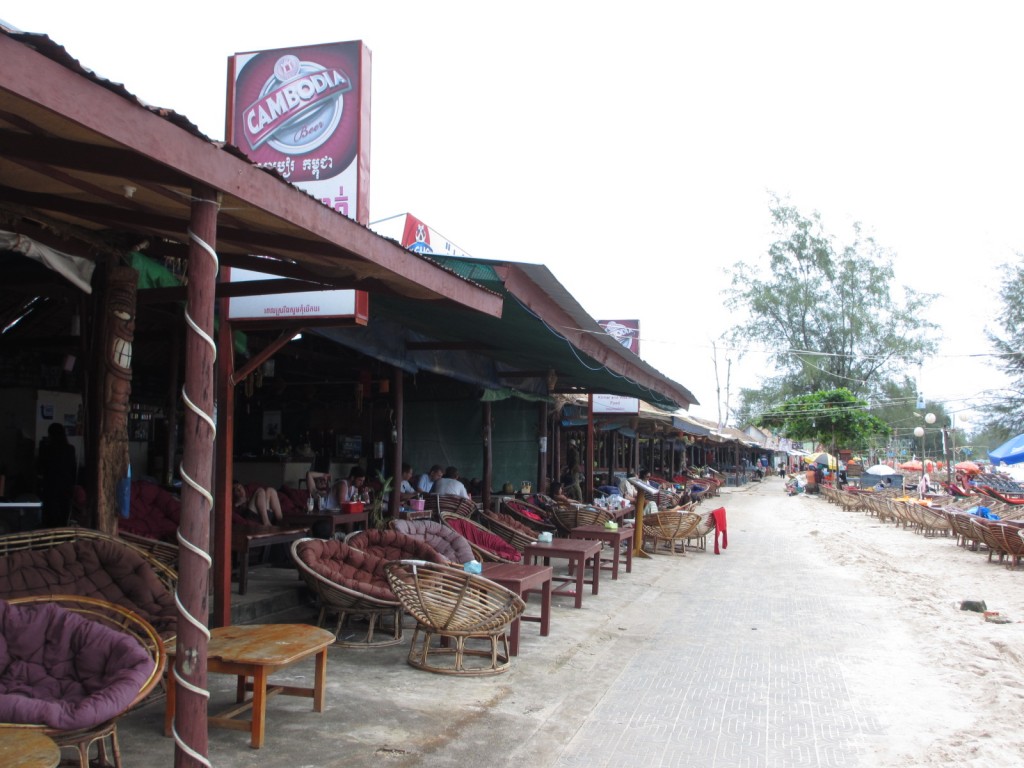 I was intrigued by the idea of living on a treehouse and wanted to check something COOL off my bucket list!

How to go to Koh Rong, Cambodia 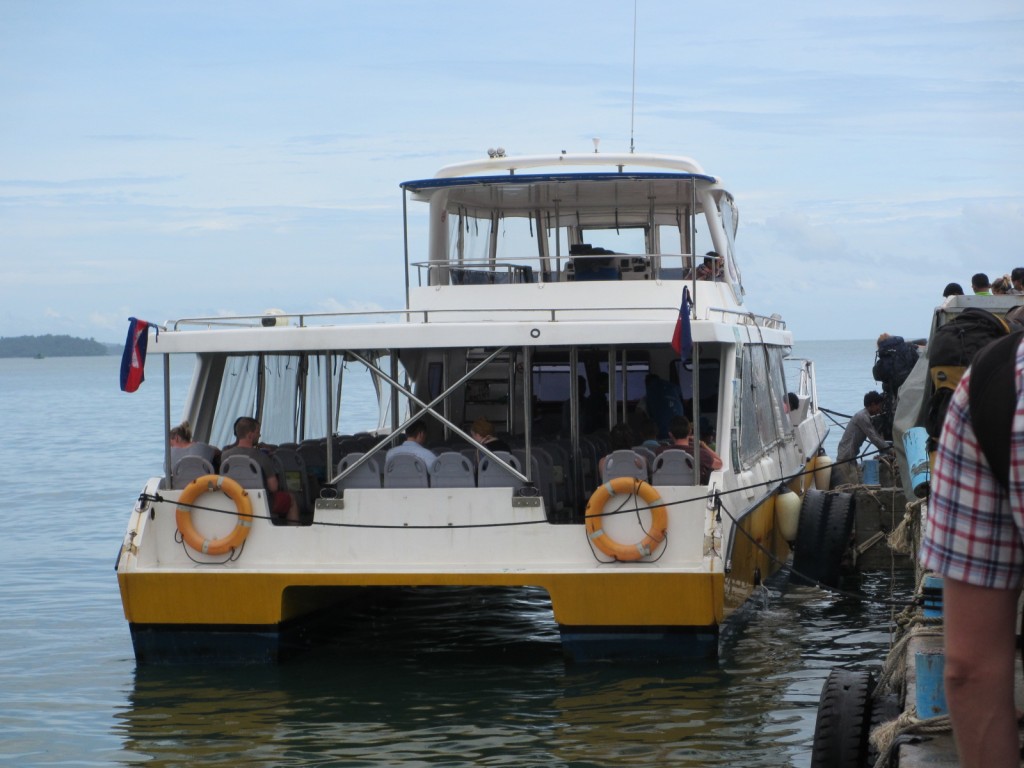 Serviced by fast boats from Sihanoukville at the fourth stop, Koh Rong is easily reachable in 45 minutes.

You can book through:

Return tickets to and from Koh Rong island at $21.

The boats depart Sihanoukville at 8am, 11am and 3pm daily.

Return tickets to and from Koh Rong island at $20.

The boats depart Sihanoukville at 9am, 11am and 3pm daily. 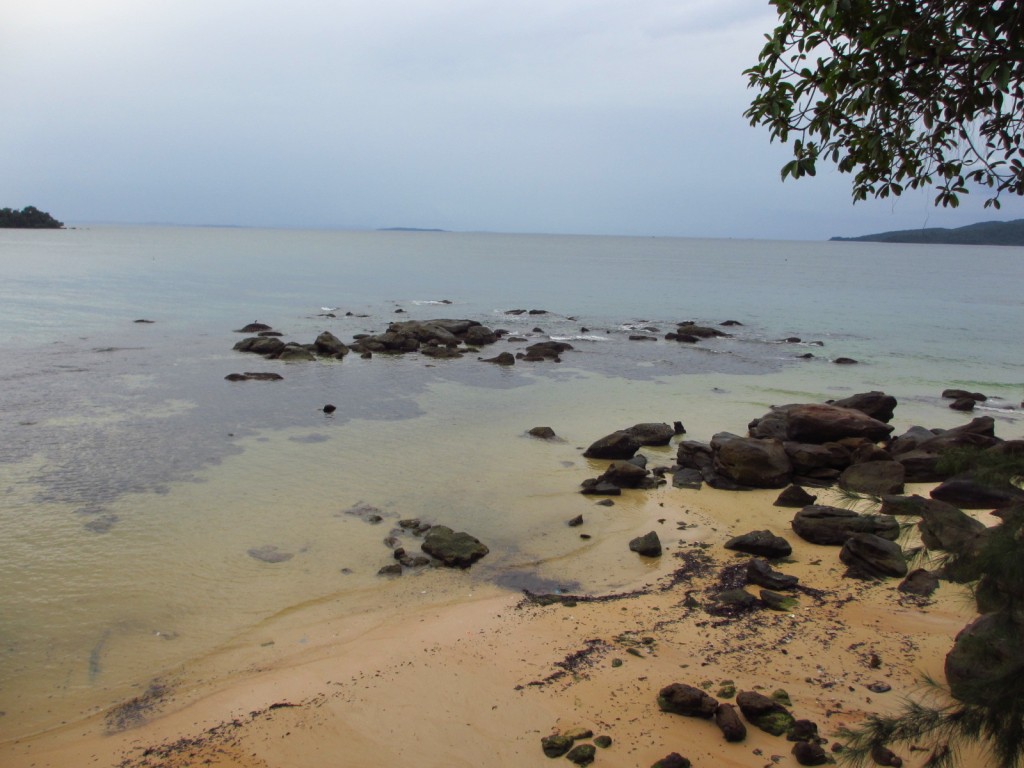 View from our Treehouse in Koh Rong

This makes the island great for snorkelling, kayaking and diving. Koh Rong is almost as deserted and undeveloped as an island can get, perfect for those needing a city break! 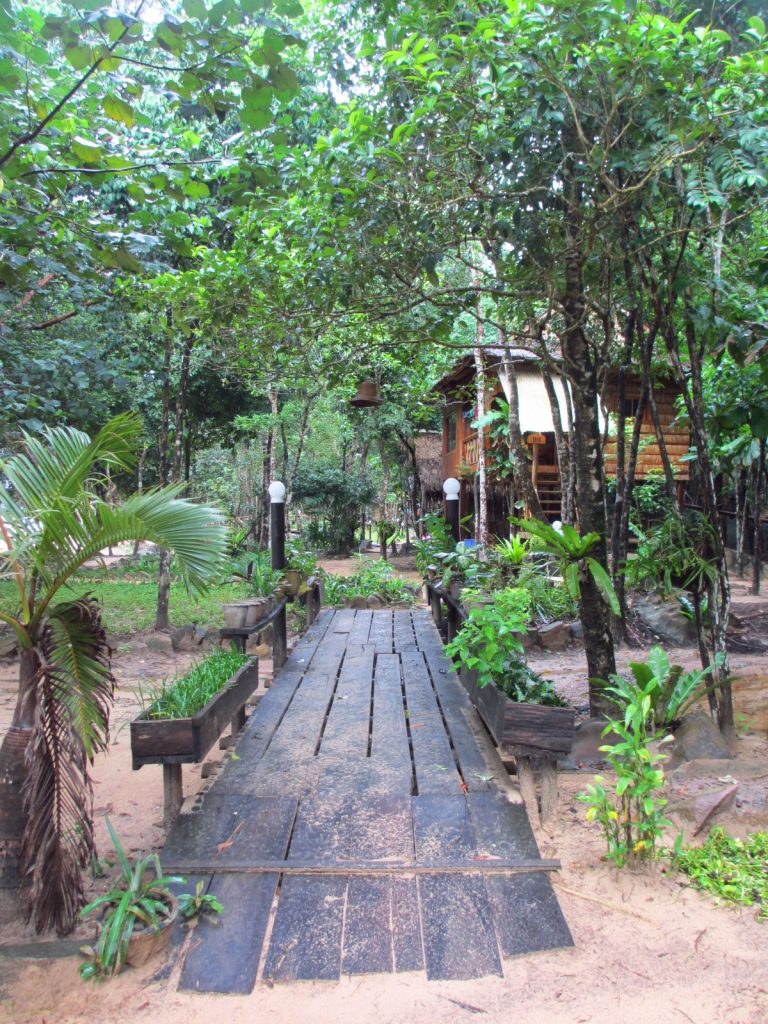 The island does not have mains electricity, so resorts rely on generators for power. Power is usually switched on when the sun sets until the next morning. Water is also a precious commodity, so most bathrooms employ an economical bucket flush system.

Where to Stay in Koh Rong, Cambodia

There are many bungalows in Koh Rong, and our choice was Treehouse Bungalows, for the fact that they have treehouses facing the sea! It was a great change for us city dwellers to have the sounds of nature, rather than music, lulling us to sleep. 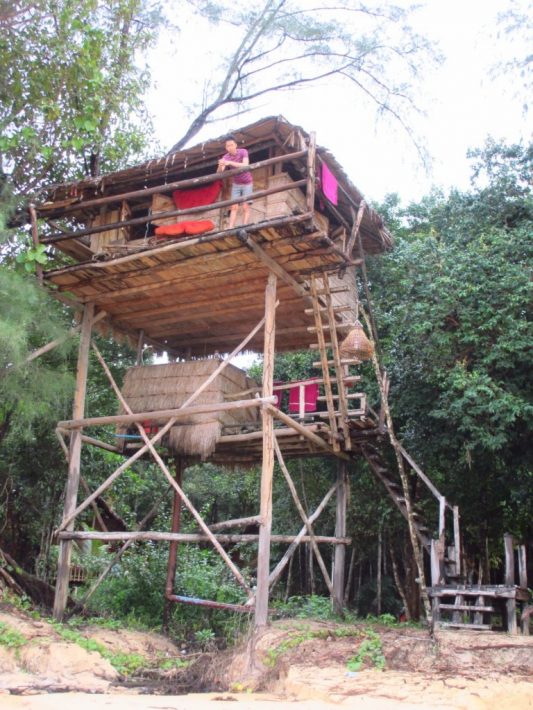 Bearing in mind the limited facilities and amenities that a treehouse can offer on an island, we kept our expectations low.

The novelty of living on a treehouse when we got there preceded any safety, cleanliness and hygiene concerns we previously had.

There are no fans – only the sea breeze. The toilet had to be flushed down with water manually. The lock to our room door was as good as none – which led to a wild dog being the burglar to our treehouse and wrecking my day bag for the granola bar that was stored in it. 👿 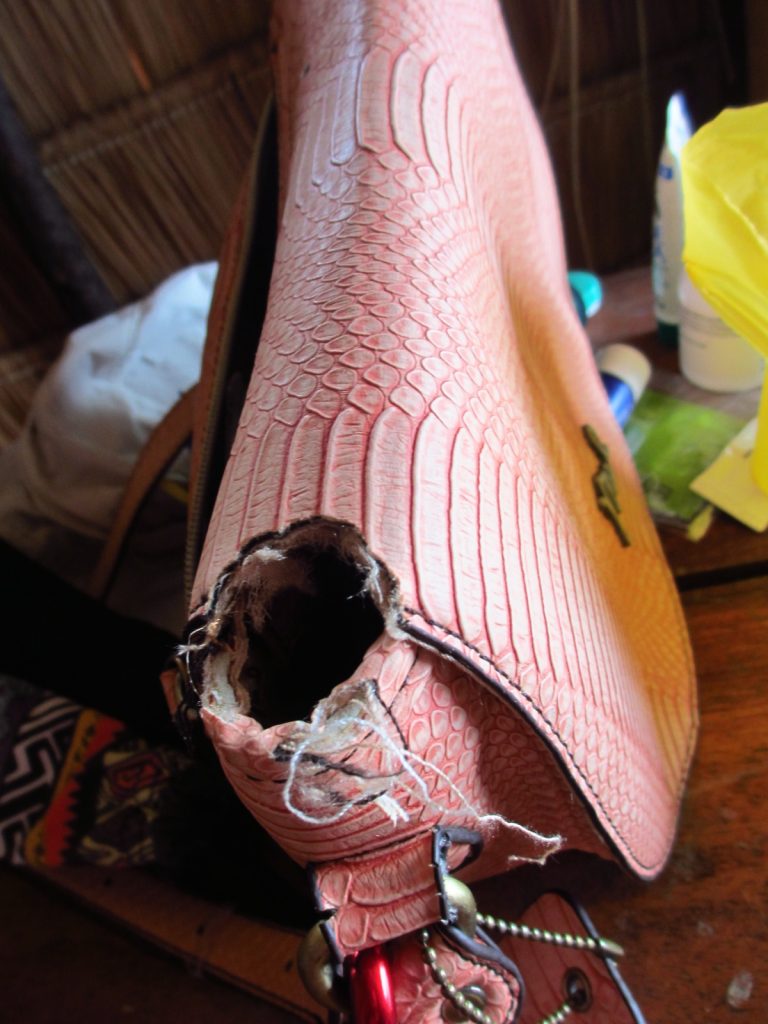 Dog that bit a hole out of my bag. Pfft!

We experienced a power outage on the only night that we stayed, and had to shower in the dark.

There was no water heater, so on top of showering in the dark, we had to shower in the cold. 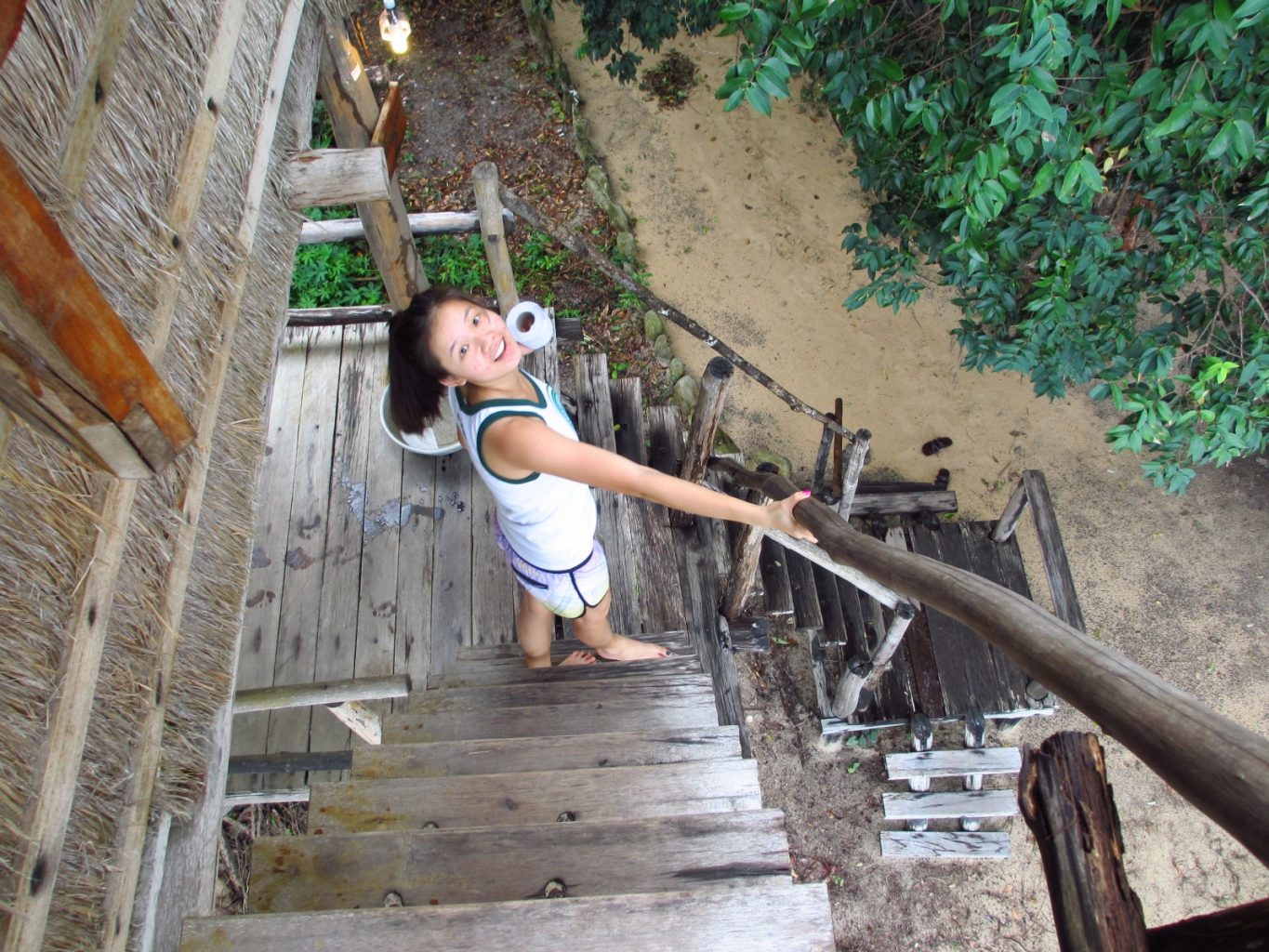 It might be a terrible experience for some, but we found it an exhilarating one!

If you aren’t afraid of living on stilts, don’t mind the basic amenities that a treehouse has to offer, dream of listening to the crashing of waves as you fall asleep, love to be awakened by the sound of crickets in the morning crisp air, wish to experience a sunrise view from the comfort of your room, then you should definitely try living on a treehouse on your own! 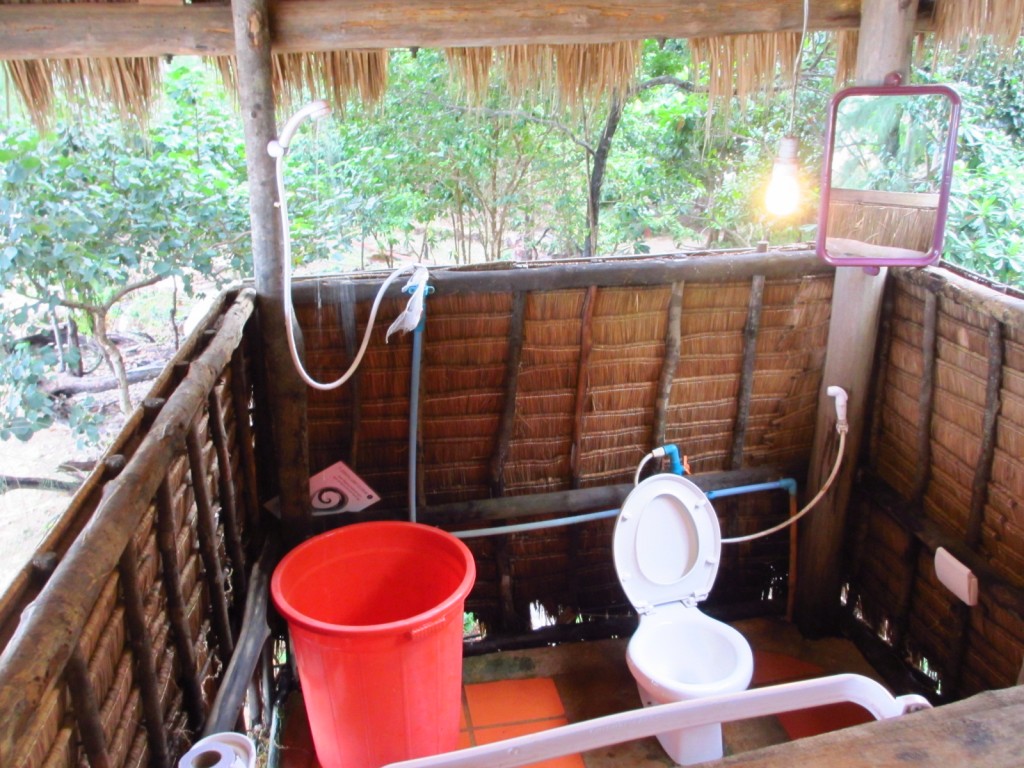 For a virtual tour of Treehouse Bungalows, visit here.

The majority of bars and hotels in Koh Rong are on the southeast of the island.

Some call Koh Rong a party island, with music blaring out till the early hours of the night. The main generator on the island turns off at 2.30am, but one bar, Mango, which has its own generator, pumps on until 5.30am. 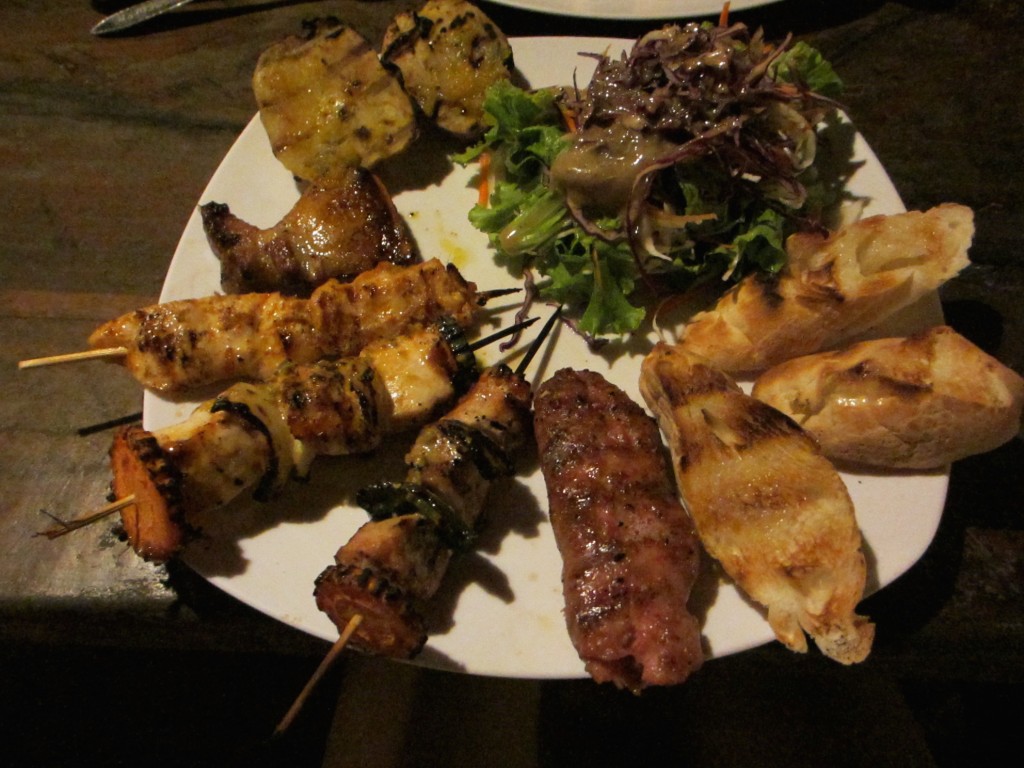 All sorts of meat at a restaurant on the island!

Plans for a massive resort complex, complete with golf courses, airport, casinos are underway. Koh Rong will soon be one of the most famous tourist destinations of Cambodia, so I strongly urge you to head there before development plans take shape if you’ll be passing by Cambodia!

If you ask me if I prefer Kampot or Sihanoukville, I would say that both offer different scenery.

Kampot is more laidback, with plenty of natural scenery. You can get a glimpse of real local living.

Sihanoukville is more touristy. It’s full of beaches and islands.

Which part of Cambodia would you choose to visit?